The Glasgow Appeal: Inside the City’s Burgeoning Design Scene

Affordable real estate, a spirit of collaboration over competition, and a unique urban history are keeping young designers in the Scottish city. 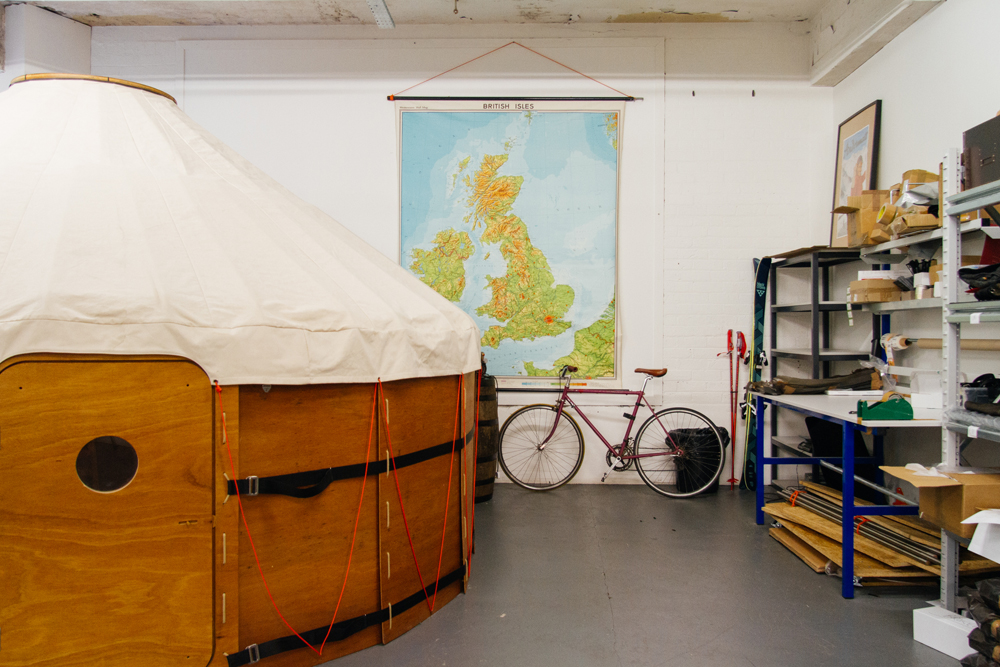 Trakke’s Glasgow workshop is populated with quirks, including a yurt.

At the end of a shabby stretch of road in Glasgow’s west end is SWG3, an cultural “incubator” if we’re being euphemistic. Or if we’re not, it’s one of those seemingly paradigmatic urban art centers with ample space for studios, recording facilities, nightclubs, and light manufacturing. Bounded on one side by an elevated railway and scruffy brick archways underneath, the lane is an offshoot of an offshoot of Argyle Street, the high road that cuts through the Finnieston neighborhood. “It’s a real up-and-coming area,” under- states Alec Farmer about the current “hippest place” in the British Isles—if The Times is to be believed, anyway.

A former graphic designer, Farmer is founder of the backpack company Trakke. He rents out a floor of SWG3 for his workshop, where his five-person staff stitches, sews, and labels every single bag. Music blares in the back-ground, assembly instructions are scrawled on a blackboard, and a yurt positioned at one end of the work floor is as much a charming spatial non sequitur as a break space. The place, Farmer says, “functions as a factory, but it looks kind of like a design studio.”

Workplace hybridities (ambiguities?) like these flourish not just within SWG3 itself, or elsewhere in other arts-and-making condensers like the Glue Factory, but all over Glasgow. Across town, on the ground floor of a red sandstone tenement fronting stately Parnie Street, the watch shop Instrmnt operates along similar lines. The compact boutique is primarily a showroom for founders Ross Baynham and Pete Sunderland’s more-minimalist- than-minimalist timepieces. But it also doubles as a space for conversation and events that draw young designers fromaround the city. “We’re really trying to push it as a kind of alternative hub for creative people and businesses in Glasgow,” says Baynham. The pair make nearly all their sales online, which is fine by them because “it allows us that breathing space for the shop to evolve into whatever we want to use it for. God, let’s be done with all that chasing profit.”

The pursuit of profit, or its tentacle-hold on life, cannot be so easily shaken off. But in a place like Glasgow, once the British Empire’s industrious second city, money doesn’t seem as invidiously pervasive as it is in, say, London or New York. This may be illusory, but studio rents are indisputably cheap—“as cheap as you can get, anywhere in the world,” says Baynham—and pose little threat of smothering entrepreneurial drive. Designer Gabriella Marcella, who creates prints using the once-obscure, now trendy pattern-making method of Risograph printing, remembers when she went looking for a workspace for her print house, RISOTTO Studio. She found one inside the Glue Factory, within spitting distance of the M8 motorway, at the measly rate of $63 a month. “You just don’t have that risk of overhead here, so you can be experimental,” Marcella says.

You could say that this attitude—casual, ad hoc, risk-taking—is part of the Glaswegian demeanor, coming out of the city’s trial-and-error expansionism. Compared with the more European Edinburgh, which grew out unevenly from a walled medieval center, Glasgow seems astonishingly modern, with its nonhierarchical Jeffersonian grid, century-old steel-framed buildings, and global outlook. But its historical industries—the majority of the world’s ships were once built at Glasgow docks—are by this point just a rumor, after decades of downturn. There is, however, something of a silver lining to these urban doldrums. “There are so many vacant sites available to us just through the social and political demolition of the city in the past 50 years,” says architect Andy Summers matter-of-factly. Moreover, these exindustrial spaces “have larger floor plates because they have bigger spans,” making them perfect for these young upstarts, who are in need of floor areas that match their ambition. They include people like Marcella, Farmer, Baynham, and Summers, but also small architectural practices like Lateral North, which is trying to reposition Scotland’s cultural stead in a post-Brexit world, and Dress for the Weather, the architects behind the Glue Factory, who count research, craftwork, and building all within their wheelhouse.

The favorable real estate climate inoculates this generation of designers, in their 20s and 30s, against the worst effects of competition. “There isn’t this sense of competitiveness going on. I think there’s a bigger sense of ‘we can all work together to create success for all of us,’” says Farmer. Before launching his company, he interviewed for a position at Google London but ultimately resolved to remain in Glasgow because of its closeknit network of creative professionals. The smallness of Glasgow (population:600,000)—and, for that matter, Scotland, a country of only five million—cultivates camaraderie, suggests Summers. He worked in the London offices of Zaha Hadid for five years after studying in Edinburgh; he then drifted back up north, shuttling between the country’s two metropolises and eventually settling on Glasgow. In early 2015, he cofounded the collective Architecture Fringe, or ArchiFringe, as a discursive platform for the city’s youthful-skewing architectural community. “The younger practices up here are definitely more supportive of each other and of good work,” he says.

The ability to spot and promote this good work is largely a by-product of Glasgow’s cultural superstructure, which is centered on the preeminent Glasgow School of Art and the more self-effacing, but lively, Centre for Contemporary Arts. The city has attracted artists for decades, but recently the institutional gateways have opened, allowing dialogues about architecture and design to spring up. This overlap has coincided with liberalizing currents within the broader architectural culture, in particular the legitimation of research, community-based work, and often critically motivated projects as worthwhile disciplinary activities. In particular, the architecture school at Strathclyde University has played a catalyzing role in a (minor) boom in small practices with inchoate, hard-to-define portfolios. Graduate students in their final-year studio are encouraged to treat their projects less like intramural exercises and more as scalable—not to say profitable—ventures.

Such was the case for Lateral North, whose founders’ thesis project at Strathclyde was further developed as the Scottish Pavilion at last year’s Venice Architecture Biennale. Fronted by Graham Hogg and Tom Smith, Lateral North takes its name from Scotland’s strategic geopolitical position between the U.K./Western Europe and the Arctic region stretching from the Nordic triumvirate to Canada. (Fittingly enough, the two run their office out of an Instagram-friendly Swedish café, occupying the mezzanine level.) Hogg and Smith use mapping techniques to underscore their premise, a heuristic through which it’s possible, for example, to study the cultural mores of the northern countries for possible application to Scotland. Examining the building traditions of Sweden or Norway might show “how you could construct in Scotland,” Hogg suggests. “At the moment there’s very little timber construction here.”

After Brexit, which Scots largely opposed, and the failed 2014 referendum for independence, the country’s immanent nordicity seems obvious, and yet it was not among the topics celebrated by last year’s Festival of Architecture, itself an affiliate event tied to the Year of Innovation, Architecture, and Design. The traveling fete was divisive among this group of Glaswegians, with some criticizing the programming for adopting a lowest-common-denominator approach (a LEGO demonstration was its most successful event), while others benefited from the increased exposure. Summers’s independent, contributor-led ArchiFringe formed to rally the discontented, for whom the architectural profession in Scotland appears to be contracting. Organizations like the Royal Incorporation of Architects in Scotland heavily promoted the festival but did little to address concerns raised by many practitioners, including the upwardly redistributive procurement methods that bar would-be builders from public commissions and so favor a handful of large corporate firms.

Despite this, a few designers were able to use the event to their own ends. Dress for the Weather, for instance, was commissioned to design a pop-up installation, which became the portable Architecture Bar, that could be whisked from event to event. It was particularly felicitous because the bar—a spindly, jagged affair that could have just served as an interesting backdrop—was really the culmination of a long-running research project that looked at drinking habits and spaces within Glasgow. That work, in turn, grew out of a survey of the city’s tenement buildings and their shared (and anomalous) features.

“We’re all talking a similar game,” says architect and Dress cofounder Matt McKenna of the Glaswegian scene. It isn’t self-deprecation. Instead, he says, it’s the result of a close, shared engagement with the city. “We carve out our own opportunities here. I’m sure there would have been great opportunities to move down south and work there, but we feel invested in the city. We all do.”