And the Winner Is!

The Department of Energy’s Solar Decathlon 2011 is now officially in the books. Despite the sub-par sunshine and weather throughout the week, the competition ended with success. Nineteen student teams from universities around the United States and elsewhere competed to the final day. They were challenged to design, build, and exhibit solar- powered homes during a weeklong competition. The homes had to do everything you would expect from a typical house while striving for net positive energy balance and remaining affordable. Hot water, temperature and humidity controls, home entertainment, and appliances were all measured for performance while architecture, engineering, communications, and market appeal were judged for excellence in design and promotion.  Standings shuffled daily and sometimes hourly, but in the end it was The University of Maryland’s entry, WaterShed, that took home first place overall.

The Concept: WaterShed’s focus, as its name implies, is on the importance of water in our homes and in relation to the environment. Its split-shed roof successfully captures rainwater, funneling it to the center of the house where water is celebrated as the focal point of our design. Here the constructed wetlands feel as though they pass through the interior. There is a visual connection from the bathroom to the grey water recycling system and rainwater storage wetlands. And residents have an opportunity to understand that their choices directly affect the environment around them. A dual-flush toilet and low-flow fixtures with water conservation features follow the trend on the interior while a green roof provides a beautiful solution to help control storm water runoff on the exterior.

Not to be lost in WaterShed’s defining features is the fact that this is, indeed, a solar powered home. A 9.2 kW array and evacuated solar thermal tubes harvest the sun’s energy for use inside. During the competition the house was grid tied, providing electricity when the weather was uncooperative and allowing excess energy to be sold back to the utility during sunny days. WaterShed’s adequately sized array provided a positive energy balance and successful task completions during the competition despite the lack of sun.

Off the shelf products are used in innovative and efficient systems. A student-designed and -built liquid desiccant waterfall is displayed with elegance in each module, controlling humidity and reducing energy loads. Sensors throughout the house provide real-time data to control energy flow and comfort zones while a tight, well-insulated building envelope displays the use of ordinary materials in an extraordinary manner.  A truly sustainable home should not only conserve, but also produce resources. 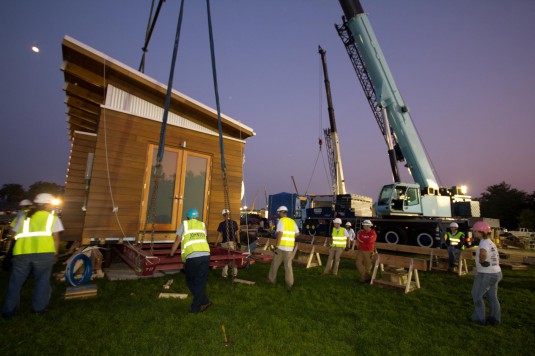 Moving WaterShed to the site

The Competition: On September 23, the competition opened to the public. Prior to this date there was a frenzy of activity at West Potomac Park as we prepared to receive our visitors.  Construction teams of excited students labored day and night to reconstruct their houses. Students cycled in and out, only take a short breaks to catch a quick wink, shower, or grab a bite to eat, usually returning before anyone had realized they left. Each day there was a sentiment of growing pride as the excitement of sharing our hard work with the public grew. 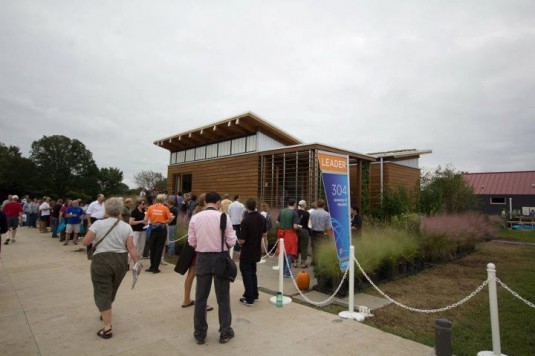 As visitors began lining up to view our home, the realization of almost two years’ of work at hand came alive. During these visits it became abundantly clear to us that the public is eager to learn about how such a house can help them live in a more sustainable manner.

Educating the public about innovative technologies is one of the most important goals of WaterShed. Our visitors’ excitement invigorated us and gave us a sense of pride for the work we have done. With over 230,000 visits to the Solar Decathlon Village, the competition’s goal of educational outreach was met and was exceeded by all teams.

WaterShed placed in the top three in almost every category, including a notable 1st place finish in Architecture, 2nd in Market Appeal, 3rd in Communications, and 4th in Engineering. While our team is gratified of the recognition for the work we put in, we are also impressed to see that there were 18 other teams capable of winning the competition. As one organizer put it, there was a single challenge placed before us with a strict set of criteria and we responded with 19 unique and innovative solutions.  Indeed a bright display of the future ahead. Congratulations to all decathletes! 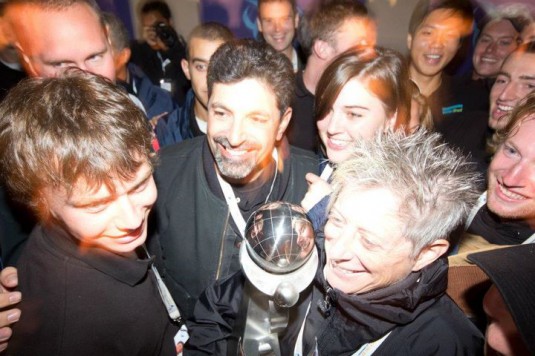