Why can’t everything be illuminated?

Last week marked the 250th anniversary of the birth of Robert Burns, and literary circles around the world celebrated. Not surprisingly, the great poet was feted with the most merriment in Glasgow, the capital of his birth country. The city boasted conferences, poetry readings, performances (no doubt the Red Hot Chilli Pipers were in attendance), and, undoubtedly, many a whisky drunk in his honor. But the most public display of affection for the Auld Lang Syne author was projected on the facade of the Glasgow City Chambers.

The 15 minute-looped show, Burns Illuminated, was on display for three nights late last month. Dramatic images by the projection artist Ross Ashton depicted the life, times, and work of the Romantic poet. The show also featured a custom soundscape and narration. On the final night, over 10,000 revelers packed into George Square for a firework extravaganza. 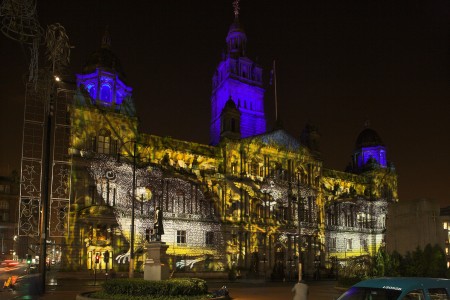 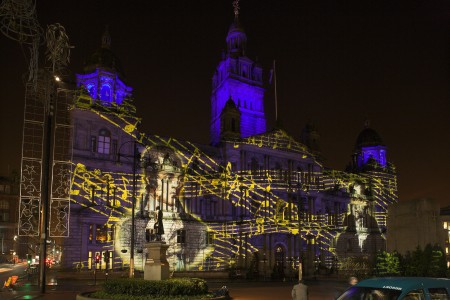 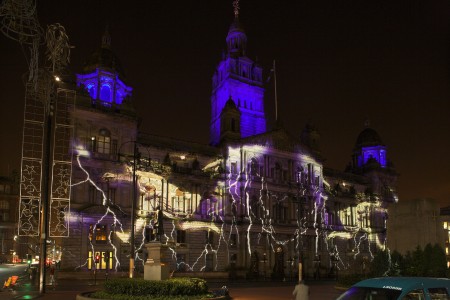 A look into Ashton’s work brings to light a large catalog of multifaceted celebrations in European cities that temporarily use buildings as a canvas for his art. And some further digging into the company that often supplies the projection equipment, E/T/C London, reveals just how many cities use this art form as away to celebrate and bring residents together.

But why are urban-scalelighting spectaculars so rare in the United States? Perhaps the only major example is is Pittsburgh’s Festival of Lights.

From October 10 to November 20, 2008 the city hosted art installations throughout its downtown, the East End, and in other neighborhoods. It brought in tourists and, just as importantly, Pittsburghers to spend time and money while exploring the newly illuminated city. Even our neighbors to the north utilize the outdoor stage with Montreal’s High Lights Festival. Large-scale light shows could easily be a temporary solution to revive struggling downtown districts and a great way to build communites.