During the winter months, some days it’s hard to imagine wanting to leave your bed. But the city of Helsinki is looking 5 degree Fahrenheit winters in the face (the average annual temperature is 41 degrees). Indeed, the new Helsinki Music Hall laughs at the cold. In a feat of technical ingenuity, the city of […]

During the winter months, some days it’s hard to imagine wanting to leave your bed. But the city of Helsinki is looking 5 degree Fahrenheit winters in the face (the average annual temperature is 41 degrees). Indeed, the new Helsinki Music Hall laughs at the cold. In a feat of technical ingenuity, the city of 600,000 is building a giant cube of glass, a material you don’t normally think of for its insulating properties.

To handle the normal cold weather, as well as the sunny summer days which, suddenly, can hit 86 degrees for short spurts of time, LPR Architects and façade specialist Normek Oy are using 11,811 square feet of triple-pane glass, made by Interpane. The glass is called  iplus neutral E, and is rated at Ug-value: 1.1 W/m²K.

Ok, so, to many of us, that doesn’t mean anything. Glass is glass. But step into a home built in the 1970’s which hasn’t yet been retrofitted, and you’ll often comment on the draft. Most of what we consider a draft is due to large heat exchanges between the temperature inside the house and the great outdoors, through the single pane glass. These windows typically display thermal losses at Ug Ø ≈ 5.8 W/m2 K, the Ug signifying the thermal transmittance through the window in Kelvins. To put it lightly: the higher the Ug value, the more sweaters you’re going to have to put on. Double glazing reduces the thermal loss to about 3.0 W/m2K. 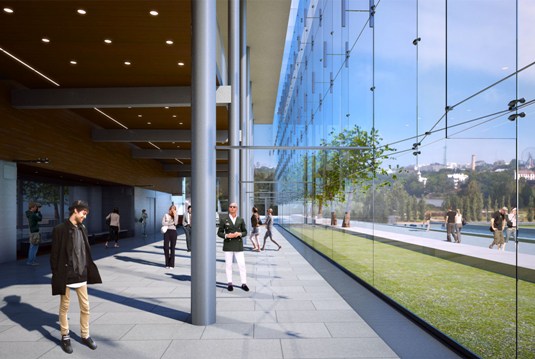 So for LPR Architects and Normek Oy’s to create not just a building, but an open music hall, completely out of glass in a normally chilly environment, the insulating glazing used is considered state of the art. Each pane’s thermal transmittance is only a third of what you would find in a standard, double glazed American home. 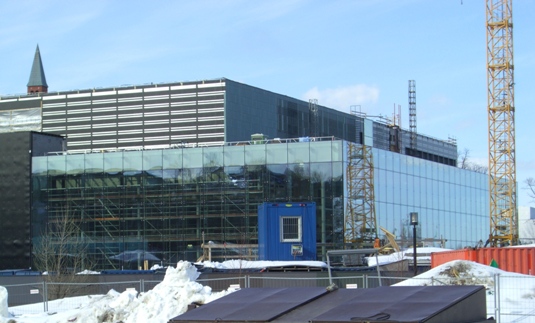 The music hall, located close to Helsinki’s city center, is being constructed next to Alvar Aalto’s Finlandia Hall, erected originally in the 1970’s. The new Helsinki Music Hall will not only provide advancements in thermal glazing, but in acoustic dynamics as well, accommodating 1,700 attendees in its main concert hall. Plus, it will house five additional halls, a library and several cafes and restaurants. Beginning this summer, it will take over from the Finlandia Hall as the new home of the Helsinki Philharmonic Orchestra, the Finish Radio Symphony Orchestra, and the Sibelius Academy – a music university of almost 2,000 students and teachers. Finlandia Hall will continue to be used for gatherings and conferences, but most concerts will now be held at the Music Hall.

Although a glass cube doesn’t seem like the most functional building for a region of extreme temperatures, the city and the Helsinki Music Centre Foundation wanted a dynamic building for their city center, attracting the attention of passers-by and becoming an architectural icon. Advancements in thermal glazing are making the new hall a reality for the city. Now we can only hope that their performers don’t hit high notes that can shatter glass.