A few days ago in Providence, RI, a peculiar take-off on the cult hit TV show Iron Chef was taking place in the middle of an old industrial complex. The place was full up for the day with a motley assortment of tattooed gear heads, various politicos (including a candidate for governor), environmentalist art-lovers with […]

A few days ago in Providence, RI, a peculiar take-off on the cult hit TV show Iron Chef was taking place in the middle of an old industrial complex. The place was full up for the day with a motley assortment of tattooed gear heads, various politicos (including a candidate for governor), environmentalist art-lovers with creative facial hair, and hip young moms in Wayfarers. Instead of asparagus, chilis and beets, the “secret ingredients” for the afternoon’s competition consisted of rusty nails and old farm equipment, and in place of fancy Wusthof knives, the contestants expertly wielded torches, grinders, and chop saws.

Spectators sat on lawn chairs and blankets in a newly completed central green space to watch the action, drinking beer and munching on brick oven pizza. The winning sculpture, a 10-foot tall structure with discarded drum cymbals balancing gracefully off its sides and what appeared to be ship sails on top, was fabricated in the allotted 40 minutes from old I-beams amidst an enthusiastic outpouring of sparks and the not altogether unpleasant smell of burning brass. As the team presented their work to the judges’ panel, flames licked out theatrically from a still-lit torch balanced on the sculpture’s front. Andrea Baker, who had the winning bid on the piece (sans torch) in the auction that followed, was planning on installing it on her front lawn. “It’s really beautiful- my kids are going to love it!” she enthused. 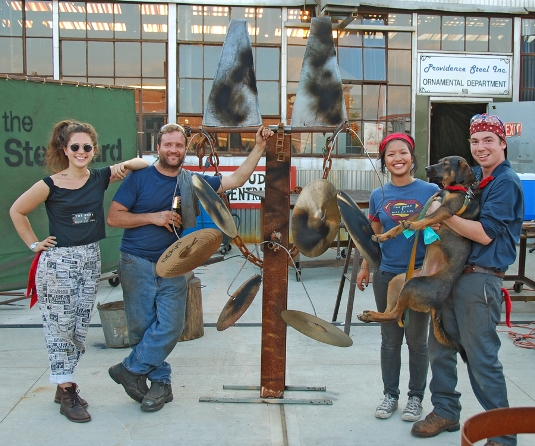 The Annual Iron Chef Competition (this year was the third) is just one of many events that help to support The Steel Yard, a nonprofit organization located in a former metal manufacturing complex tucked away in an industrial area just outside downtown Providence. Founded in 2003 by two RISD/Brown University grads, the Steel Yard offers local metalworkers paid access to what would otherwise be individually cost-prohibitive industrial arts machinery, provides the public with classes in welding, blacksmithing, ceramics, jewelry and glass casting, administers courses for youth such as a two week summer program called Camp Metalhead and brokers commissions for local fabricators for items like fencing and chairs.

Moving forward, the Steel Yard will make the site available to the public for a range of events including music, dance, theater, art exhibitions and festivals as well as for conferences and weddings. Executive director Drake Patten says that plans are also in the works for a summertime “Grit-n-Green” market that will combine instruction on topics like raised bed gardening with industrial arts classes where students can build backyard amenities like fire pits in which to torch their home-grown veggies for a tip-to-tail experience. 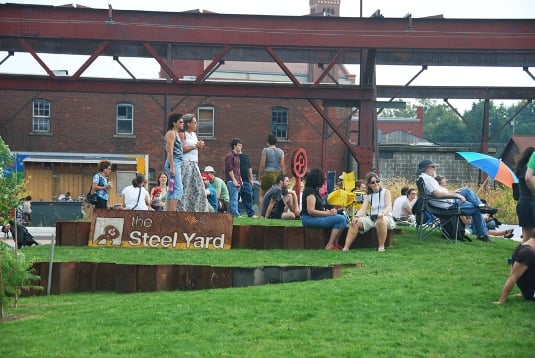 Amidst all the welding hubbub, the weekend’s event was particularly sweet for those who had been involved in the nonprofit for the past 8 years–in addition to the chef competition, there was also an official ribbon cutting to celebrate the recent completion of the environmental cleanup of the 3-acre brownfield site. Even with assistance from the EPA and other funders, the close to $1.2 million cleanup was no easy task due to the Steel Yard’s unusual approach: instead of removing the contaminated soil from the site and capping everything with concrete, they decided to deal with the soil themselves while creating programmable green space at the same time. Posters of the site in its pre-renovation state were scattered around for easy juxtaposition with the current state of affairs. While a crisscrossing skyfull of giant steel beams intended for moving metal around the site still remained, dilapidated structures, broken windows, overgrown weeds, and random piles of brick and debris had given way to a park-like combination of green space, permeable concrete and wetlands intended to passively process storm water.

Although there’s still major work for the organization to do (the next large project, on which timing is unclear, is to winterize and reroof their 17,000 square foot studio building so classes can run all year instead of the current spring, summer and fall schedule), the mood of the day was optimistic and grateful. “What was once a lead-contaminated steel fabrication facility has been turned into a thoughtfully designed, reclaimed public space,” said founder Clay Rockefeller. “It feels really great, I am so incredibly proud of what our team here has accomplished.” His co-founder Nick Bauta thanked a lengthy list of supporters and volunteers, referring from time to time to his iPad while behind them, a pagoda-like structure made from recycled floor boards and corrugated tin roofing glinted in the sunlight.

Appropriately, the “ribbon” itself was a steel bow that had been fabricated on site and strung up between two metal trashcans (another revenue stream for the non-profit comes from public projects like creating trashcans and tree guards). Amidst cheers, Paul Ianelli, the organization’s resident fix-it man and unofficial spiritual guide due to his experience working on the site for 41 years when it was still the Providence Steel & Iron Company, wheeled over an oxyacetylene torch. “Are there going to be sparks?” asked one small person to my left. The torch was lit.  Another little boy, maybe 7 years old, covered his ears in giddy anticipation. And then the sparks flew and the ribbon, instead of with a flutter, gracefully descended to the ground with a clang.

Manya K. Rubinstein has a broad range of experience in creating and marketing both traditional and digital media. Before founding Bandit Consulting in 2010, she worked at Google for 3 years as a senior analytical lead; prior to that she worked at CondeNast, with stints at The New Yorker, Vanity Fair, and CondeNet. She has experience working with NPOs and is currently an associate partner at Social Venture Partners RI, as well as an advisory board member for The Wooly Fair Art Carnival and the Institute of Doctoral Studies in the Visual Arts. Manya holds an MBA from Columbia University, an MA in media studies from the European Graduate School, and a BA in comparative literature from Brown University.