Photo courtesy 18% Grey for TEDx Karachi At this year’s TED Conference in Long Beach, California, one of the highlights was a skinny, sunglass-donning Frenchman who goes by the moniker, JR. Being the recipient of the TED Prize is clearly an awkward and unexpected occurrence in the life of a street artist trying to protect […]

At this year’s TED Conference in Long Beach, California, one of the highlights was a skinny, sunglass-donning Frenchman who goes by the moniker, JR. Being the recipient of the TED Prize is clearly an awkward and unexpected occurrence in the life of a street artist trying to protect his anonymity—he is now struggling to negotiate semi-anonymity in a line of work that depends on remaining in the shadows. Not an easy thing to achieve when trying to launch a global art movement. Or is it?

How, then, could this secretive (sort of) street artist maintain his identity (and credibility) and fulfill the very public mandate of the TED Prize, which calls for nothing short of  changing the world?  To pull this off seems worthy of a prize in itself.  The “wish”, the project he calls Inside Out, would have to become something larger than the artist himself, something others could own and enact on their own terms. The answer, as JR told me one morning in the corner of a gallery, was to become, as he calls it, “the printer”. Genius.Inside Out was conceived to empower people from all walks of life to participate in a global art movement by pasting their portraits up in their cities. In other words, he wanted to help others do what he does. On the surface, it might look like he is trying to turn everybody into street artists. This is absolutely not the case. This is nothing like the transformation of Mr. Brainwash in Banksy’s film, Exit Through the Gift Shop. For JR, “the street” just happens to be the canvas. What he has in mind is something bigger than just art. One could, in fact, argue that this is the condition for authentic art. 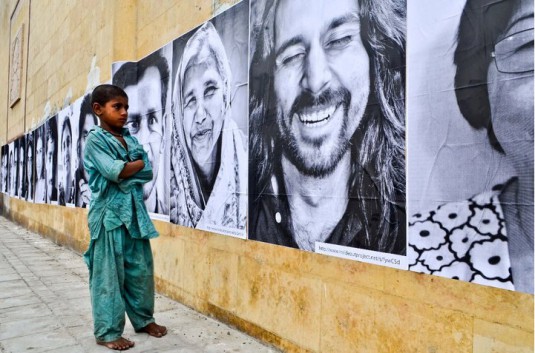 The real objective is to expose racism, poverty, war, inequality and other social ills. JR’s approach, and the reason he is called a street artist, is to present such issues through large-format images of the people affected, often under political systems not so open to public expression. When I press him on the social justice aspects of his work he just shakes his head and says, “I’m an artist and this is art. Whatever happens, happens. For this project I am just the facilitator.”

One of the first to stand up and volunteer to take a leading role in this project was Sharmeen Obaid-Chinoy, a Pakistani and TED Senior Fellow. She saw in JR’s work the potential to make a powerful statement against the persecution of minorities in Pakistan. “Using visual mediums to express viewpoints on social and political issues is an effective means of awakening the Pakistani soul,” said Sharmeen. “I hope this project will initiate a much needed conversation about how we see others around us.” Towards that end, many of the photographs in Karachi are located in central locations to allow access to all people who are passing through, no matter where they live, what their economic or social status is, or what religion they subscribe to. 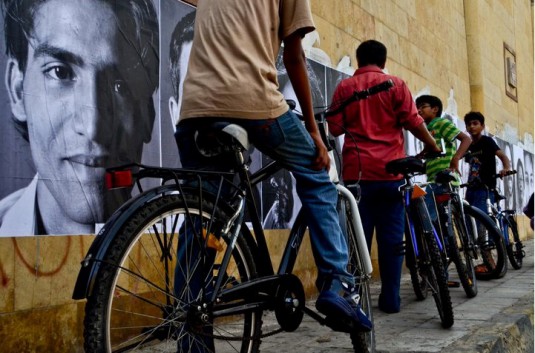 Amean J., one of the group’s leaders, said that “The concept of public art is not very common in this part of the world, but audiences in other developing countries have responded to this with optimism and we are also looking forward to a positive response”.

As expected, the project has produced different responses. As the project began gaining more widespread notice, some whose photographs were taken asked to have them removed because they felt the images were not what they wanted to present to the public. Most interesting, however, is that those participants installing the photographs were actually discovered by the police during the process. Though warned by the police to remove them, once the authorities actually left, the installation process continued. To this day, the photographs still remain for all to see. 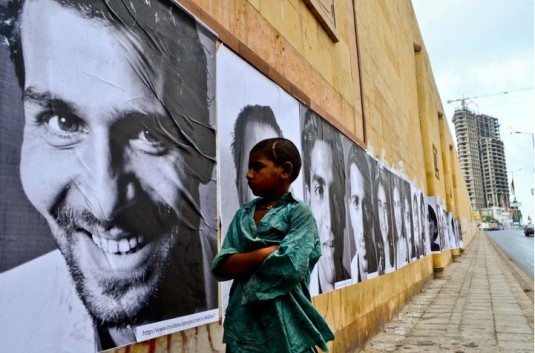 “We come from a place that is already inside-out, topsy turvy, upside down in many ways. For me this project is a way to step back and actually see the world for what it is and people for who they truly are. Just ‘Other people.’ Once our differences are stripped away, it is clear that we are all the same. This is why it’s so important that we are treated the same, and that is what this project signifies to me,” says Sitwat Rizvi, one of the participating photographers.