David O’Donnell is a local, historic preservationist hero in my book. He was head of a fledgling neighborhood preservation group I joined years ago. It seemed he was running six different committees at the time, a kind of start-up, serial entrepreneur of preservation activism.

David knows everyone. He knows how to get things done and who’s preventing things from getting done, unafraid to colorfully characterize the intransigence of reactionary or corrupt politicians and developers. He’s an amazing, “can do” kind of guy, able to energize others to tackle a multitude of tasks. He was the moving force behind more than one successful pocket park. In one case, converting a triangular patch of plain asphalt into an oasis. With the money leftover from the one park project he did another only 100 yards away. Both parks are conscientiously maintained by neighborhood committees that David formed; quite an accomplishment in this city, financially, logistically, and politically. “Thirty percent of London is parkland. That was my inspiration,” he says. 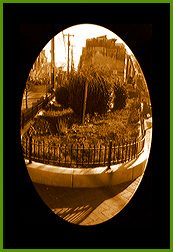 “PRESERVATION WAS A FAMILY HOBBY”

David O’Donnell grew up in a replica of an 18th century Pennsylvania farmhouse. His father had the house built by architect John Thrower. Everything down to the nails was made by hand. “Valley Forge was my playground for camping and sledding.” History itself was, thus, his playground and explains his passion for historic preservation – I did not know that.

He now lives in a small 18th century wood framed house that he restored. Restoration of the floors alone required pulling up multiple layers of nail-studded plywood, linoleum and a red and white speckled shag carpet that Austin Powers would have killed for!

Ironically, those awful layers preserved a beautiful wide board floor made from a species of red pine that became extinct over 100 years ago. He was once offered a tidy sum for those floorboards but turned it down, of course. He loves to do his own research and has, so far, traced his house back to a 1797 sale for the sum of “400 Spanish milled dollars in hand”– after the American Revolution our currency was shot for a time, he reminds us.

Quotable, funny, David O’Donnell also has his detractors and was once dethroned as president of the neighborhood civic association. A new off-ramp from the major I-95 highway had spiked traffic volume and speed through the neighborhood dramatically. Controversy erupted with a petition to redirect traffic flow – one end of a street was pitted against the other. David, caught in the crossfire of his own neighborhood, was dumped unceremoniously after decades of selfless accomplishments on behalf of the community. A very painful moment in an otherwise very upbeat conversation. I felt badly for asking but was curious, remembering my own disappointment at his temporary departure from the preservation scene.

ONE STITCH AT A TIME

How does historic preservation stitch the urban fabric together and make it unique? You could say it’s fortuitous that David O’Donnell has taken this on – he is a clothier (high end men’s suits) by trade, a “Master Fitter” trained by Brooks Brothers in New York City. He’s a professional with a practiced eye for good fit, seamless stitching and tightly woven, quality “threads.”

“I don’t see the suit business ever coming back again,” David says, with a fleetingly doleful expression, explaining that the economy drove his clientele, mainly lawyers, to go casual, “except to see a judge.” One suit, waiting on the back of a chair, is all they need now. 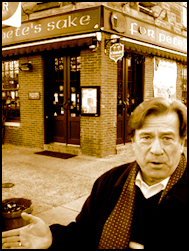 David O’Donnell cites Pete’s as a
friend of preservation, a good neighbor

ONE BATTLE AT A TIME

“The Historic Commission is just a battle. You can win,” says David with unquenchable optimism. “You really have to bargain with them but I love them,” he adds, noting that they are terribly understaffed, a fraction of what, say, the city of Boston (a smaller city) has for preservation staff.

Developers are another matter entirely. David knows all the old tricks they trot out to thwart preservation efforts. “It’s as if they went to Developer’s School,” he laughs. “They always say the same things.”

When expedient, shady developers have been known to dodge a requisite permitting hearing or demolish an historic property overnight, quickly erecting a new structure before anyone can take evasive action. 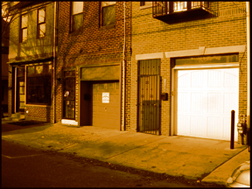 Mute house garages give nothing
back to the neighborhood as David O’Donnell sees it.

David tells of one developer who threatened to cancel a pending development of 49 houses if the neighborhood insisted on preserving the one remaining 18th century house on that side of the street. David worked hard, prevailed upon him with everything he had up his sleeve. He tells me that same developer came around, cooperated, preserved the property and built his 49 units. “I knew he would,” David says with evident satisfaction.

A CONCRETE EXAMPLE OF PRESERVATION

David O’Donnell saved these 18th century “bookends” on both sides of this street. Before highway I-95 roared through like a concrete tsunami in the early 1960’s there were continuous blocks of such 18th century brick homes extending from the riverfront back into the neighborhood and city. He convinced a recalcitrant developer to save the last 18th century brick home on the left and to then realize his 49 unit development…a considerable improvement over the chicken slaughter houses and automotive dumps that had come to blight the area. Ever the pragmatist, O’Donnell now wonders what can be done to “humanize” the foreboding underpasses that remain as the only street level connection to his now truncated neighborhood.

So who is David’s Goliath, who are the Philistines in all this? It’s not just big bad developers, or sly architects or corrupt politicians or small-minded, power-grabbing members of the community – it could be any one of them or any one of them could be your best ally. When it comes to doing battle David O’Donnell also knows how to be friends with former “enemies” the way opposing lawyers often chat amiably at the conclusion of a trial. 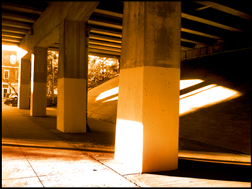 David O’Donnell wants to “humanize” the underpasses
that connect his neighborhood disrupted by highway I-95.

Finally, I asked David what his secret was, how he successfully turns developers on their ears, cajoles people, twists their arms (in a friendly way) to get them to do the right thing. He said something modest and forgettable like, well, they get to know you. But, to quote Woody Allen, he “just showed up”…a lot.  When he had his own business he was spending some 30 hours per week on preservation activities though his schedule and availability has since changed.

He’s too modest, though. It’s not just the time spent. He knows how to operate. City officials sometimes conspired to reschedule meetings, attempting to wear David down. He’d lose time, valuable time off from work.

When you want something accomplished in preservation (in this city, anyways) you have to go all out – you hit every associated city agency, councilman and state senator with a letter, you track meeting schedules and agendas, you arm yourself with precedents, you know the regs cold, you hold everyone accountable and, yes, you show up – again and again and again.

He’s won some and lost some, of course. One particularly nice 18th century house he was watching was torn down. It was so obvious to him that it could easily have been restored. Witnessing that colossal waste and destruction launched him into preservation for the next twenty years.

TOURING THE BACK ALLEYS

David O’Donnell showed me a series of low income houses at the back of this alley developed by Octavia Hill, an English social reformer of the 1800’s. They are virtually unchanged, still intact and still function as low income housing. On the corner of this same alley, a new residence created from an existing structure is in progress.

But don’t write David O’Donnell off as someone categorically opposed to new development. “I like reuse,” he says, as he points out a contemporary, adaptive reuse project he likes. His own new project-in-the-works is to get the city to install brick traffic crossing paths in his neighborhood to slow down drivers and weave the scale of brick houses with the streets for a calming effect.

“My tomato plants were leaning sideways!” David says with astonishment as he demonstrates, leaning to one side, like a tomato plant searching for sunlight. “Instead of a bushel basket I got one tomato.”

The sun onto David’s yard was recently blocked by a new structure. “Light and air” are supposed to be the watchwords for all zoning determinations. If someone is proposing a development that will impinge on your “light and air” then you are supposed to have a strong case for mitigating the design. I think David, as sophisticated and knowledgeable as he is, might have been duped by the architect’s drawings. It’s eye wash. Architects can bend shadows to any time of day, year and planetary alignment they want. But surreptitious acts can play out even more blatantly than that:

“What happened to the 35 foot height rule?” David demanded of a committee person about another new development that he pointed out to me in his neighborhood. “We knocked the project’s height down from 57 to 53 feet,” was the flat response.

EYE ON THE PAST,
WINDOW ON THE FUTURE

“I could talk about this forever,” says David explaining his passion for historic preservation as we walked and talked for a couple of hours in the cold, brittle afternoon sun. Why save old buildings? “It’s the charm. Because the charm makes people feel good. The beauty. It’s relaxing. It’s safer. People want to be here for the charm, then destroy it with developments.”

David O’Donnell cares deeply about preserving old buildings, “a glimpse of what once was,” as he puts it. Wisely, though, he knows that people constitute the true meaning of neighborhood. He describes an eerie, shriveling, social effect that begins with the installation of a new street front garage on a house and explains why he fought so hard against them. “Today’s demands create unsafe, darker, isolating [conditions]…People pull into their garage, and shut the electric door behind them. There are no windows, no flower boxes and no people on the streets.”

We sat in a corner cafe with our warm drinks surrounded by exposed, old wood and brick and the comforting aroma of fresh coffee. Looking out a large cafe window we gazed back at buildings, cars and streets. As dusk approached David pointed:

“You see that house garage over there? They’re a couple with two kids. I never see them. There’s no “hello.”