Could this low-cost, renewable system turn homes and businesses into self-sustaining energy producers?

Metropolis’s 2009 Next Generation competition received scores of entries, from which this year’s jury chose one winner and eight runners-up to be recognized in the May issue of the magazine. But there were far more than just nine good ideas in the bunch. The judges also selected 12 “notables”—entries that, for various reasons, fell short of the final selection, but that the jurors felt still deserved recognition. To that end, we will be posting one notable Next Generation proposal every Thursday for the next three months. In doing so, we hope to foster discussion that will help the teams refine their ideas, connect with like-minded readers, and perhaps even implement their projects in the real world.

This week: Emilio Ramirez’s proposal, Feeding the Addiction: The Emergence of the Single Family Power Plant, which envisions a low-cost, renewable energy production and delivery system that could turn homes and businesses into self-sustaining energy producers. How would it work?

According to Ramirez, a private energy company would design, fabricate, and install the mini power plants, which would concentrate solar heat on a collector plate to boil a fluid and create steam. That steam then turns a turbine engine that rotates an alternator for an estimated daily output of 84 kilowatt hours. 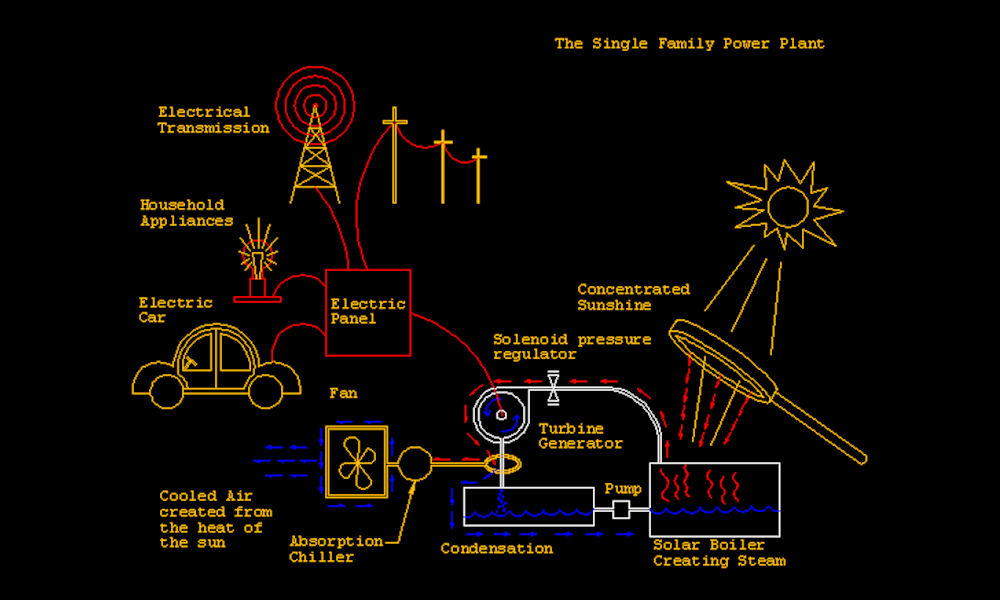 A conceptual illustration of the generation and distribution of energy. Click for a larger image.

Intrigued? Read more from Ramirez’s proposal and view additional images over at our Next Generation site. Have some suggestions for implementing or adapting this idea? Leave your feedback in the comments form below.