First there were announcements. Then there was the fire drill. Finally, there was the dripping from the ceiling in our makeshift classroom. But once the poetry workshop at Philadelphia’s Charter High School for Architecture and Design finally began, the students were unstoppable. We began our day-long workshop, focusing on the theme of The City, by drawing maps of childhood neighborhoods. Then, after reading Quincy Troupe’s “Poem for My Brother, Timmy,” which lays out brilliant details of the poet’s life in St. Louis (“we use to walk streets/of river-rhythm town, counting/cars, that passed/for nothing else better to do”), students wrote about their own city memories.

Most of the nine students are Philly natives, and their lives there have been far from idyllic. They wrote about a place where they are surrounded by concrete or abandoned houses, “the library’s empty, of course, the bar is full,” where one student’s friend was shot to death in front of her eyes, where a couple others felt lucky to escape to the suburbs. The poems provided a perfect jumping-off point to talk about the problems they see today. Our conversation centered on “street pride,” the territoriality that is at the root of so much of the violence the students encounter far too regularly. They discussed the media’s role in fueling turf wars, and debated the differences between rappers who glorify guns and drugs in specific locales and artists who set up charities that serve their hometowns. When one student lamented a relative who has not attended school in months and was recently involved in a gang-related knife fight, another wondered how the education system may have failed him. 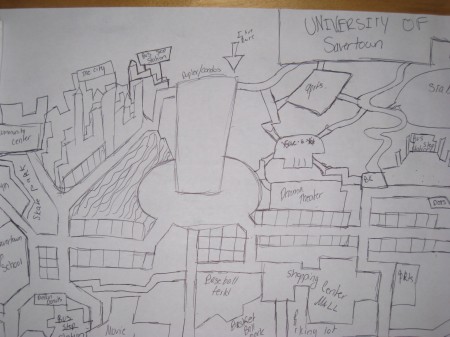 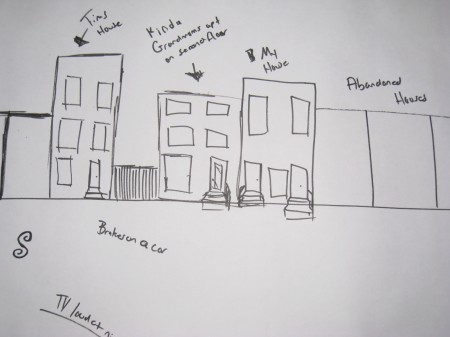 And then, it was time to dream. We drew new maps with bold visions and read a selection from Eliot Weinberger’s “Dream of India.” Then the students wrote their own “Dreams of Philadelphia,” before the afternoon bell rang and they headed back out into the city.

Everyone will be born unto smiling faces.
Hard concrete reduced to life-giving trees.
Gas and pollution is a thing of the past
as we grow in knowledge.
Only major historical buildings
will be left above ground, as to not taint
their importance and cultural meaning.
All living spaces can be powered
from main underground sources (organic of course).
Children will grow to love the earth
as well as each other. A world untainted
with religious adversaries
or dictatorship, everyone will
just be peaceful and tolerant.

War between countries
will not exist, for a worldwide
peace treaty will be formed.
All nations and people of certain
religions will take a positive pride
in their own living. Education
will become a necessity to get
a respectable job. The cities
that aren’t above ground
will be resourceful and full of great
wonders.

A place where everyone can
sit together and be conscious
that they are healthy
and safe is a dream world
to me.

The dream i dreamt that night i slept

I dream of a city a city so safe. No one would have to keep looking over their shoulder or fear people with weapons that come out at night. I dream of this place that has nothing but smiles. No worries, no frowns, no drama. This wonderful place where birds sing all the time, the air is as sweet as their song. Children running rapidly in the streets. You could walk barefoot if you wanted, even pick some apples from a tree. You could even take a walk around the corner to see a drive-in movie. Friends, neighbors, also strangers all get along. No fights, no drugs, no abuse. Just love flowing freely. I dreamt about this for a while and finally came to see that, unfortunately, this will never be real. You see . . . it’s just a dream.

In world there would be all cultures coexisting happily.

In world everyone is at a stable point in life for living in peace.

In world there is color so this is not as perfect as the Giver.

In world you can be whoever you desire.

In world gender is not an issue.

In world all food is grown and given to all to eat bountiful meals.

In world there is infinite space to live.

In world there is no room for war.

In world there are no leaders or gods just laws and the belief in one’s self.

In world there’s no past just the future.

In world there is not real aging just how old you choose to be.

In world it is only a state of mind.