“This is not a sales pitch.” That’s Rafael Viñoly introducing his presentation last night, at New York’s Center for Architecture, of his firm’s master plan for the redevelopment of the Domino Sugar Refinery in Williamsburg, Brooklyn. One could be forgiven for expecting a bit of salesmanship. The Center’s new exhibition, The New Domino (on view […]

“This is not a sales pitch.” That’s Rafael Viñoly introducing his presentation last night, at New York’s Center for Architecture, of his firm’s master plan for the redevelopment of the Domino Sugar Refinery in Williamsburg, Brooklyn. One could be forgiven for expecting a bit of salesmanship. The Center’s new exhibition, The New Domino (on view until May 29), seems designed to foster goodwill for the $1.5 billion project as it approaches the final hurdles in a multi-year regulatory review process.

It’s been a bumpy ride for the developer, CPC Resources. Local opposition has long alleged that the proposed development is too dense for the neighborhood, and that the area’s already severely overtaxed public transit cannot accommodate the 2,200 new residential units. CPC, meanwhile, has been emphasizing the community-oriented aspects of its plan—30 percent of those units will be designated as affordable housing, and the development would create a quarter-mile public esplanade along the waterfront.

In his talk, Viñoly wisely stayed above the fray, focusing on the architectural details of the master plan. He talked about the history of the site, the zoning issues at play, the volumes and the massing and the facades. It was, in fact, a fairly dry presentation—at least until the final few minutes, when he cued up a slick fly-through animation, which whisked viewers from Kent Street onto the mixed-use site and down to the riverfront. (The simulated view from the southeast corner of the esplanade, looking out at the Williamsburg Bridge and Lower Manhattan at digital dusk, was thoroughly beguiling; if that’s not salesmanship, I don’t know what is.) 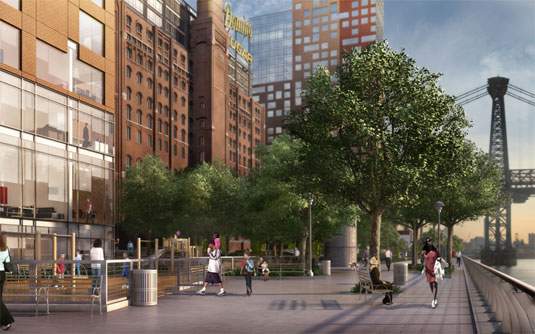 The audience appeared convinced. In a Q&A session after Viñoly’s formal presentation, even a few Williamsburg residents in the crowd declared their overall support for the project, despite some qualms about parking and public transit.

So is this thing actually going to get built? It’s hard to say. Last month, Brooklyn’s Community Board 1 rejected the current redevelopment plan—but then, at the beginning of April, Brooklyn Borough President Marty Markowitz gave his conditional support. Next it goes to the NYC Planning Commission, which will hold a public hearing on April 28. The development’s fate will likely be determined at the City Council this summer. (Councilman Steve Levin has already said that he will not support the plan.) 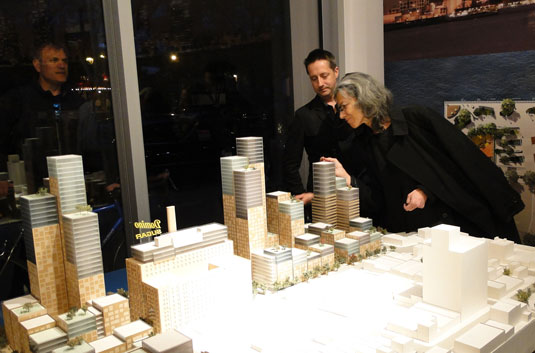 The model on display at the Center for Architecture. Photo: Emily Nemens

Viñoly, at least, seemed confident that his firm’s plan was better than Brooklyn’s other long-drawn-out and highly controversial redevelopment project, Atlantic Yards. “If you recall—with all due respect to Frank—the Yards were a design and, you know, you had to buy it,” he said. “We think we have achieved a middle ground, this attempt to bridge between the limits of urban design and some suggestions to the betterment of architectural design.”

The new Domino, as it would look from Manhattan’s East Side. Image: courtesy Rafael Viñoly Architects

.
Previously: Last January, Viñoly talked to us about his firm’s health-care designs.