The never-ending building boom continues on the Bowery and in NoHo in New York, and for the most part it is a good thing.  Neighborhoods will and should evolve. The East Village and NoHo are about to gain two new buildings, both of which are meant to look toward the future. One succeeds and the […]

The never-ending building boom continues on the Bowery and in NoHo in New York, and for the most part it is a good thing.  Neighborhoods will and should evolve. The East Village and NoHo are about to gain two new buildings, both of which are meant to look toward the future. One succeeds and the other fails.

The first is a welcome replacement for the dreary 7-story set of beige brick rectangles at 51 Astor place. In its place will be a striking 13-story building from architect Fumihiko Maki. While the base of the new building does consist of some right angles (which meet the  generous sidewalk in a welcoming way), its form begins to fully take off five stories above the street, with two muscular shards—one of glass, the other of granite—that slice mightily upward. The height shows restraint and is suitable for the immediate neighborhood. 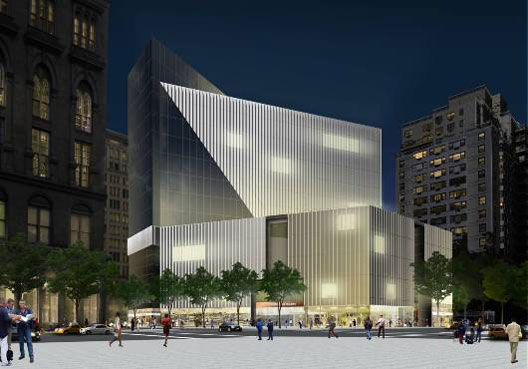 But just down the street at 347 Bowery, it’s out with the old, in with the old. In a circus spectacle worthy of the original Studio 54, architect Gene Kaufman is planning a disco attack on the neighborhood. Tearing down the former Salvation Army building will not be deemed a loss for the area. That building is, in keeping with the nature of its prior tenant, an unassuming 3-story building, neither offensive nor handsome.  But the gaudy Kaufman “boutique” hotel that will take its place does not belong here. It belongs with its brethren in Times Square.  The insult is not only in its jenga inspired protuberances—offensive as they are in the daylight, these balconies will be lit red at night.  Then to add salt to the wound, the architect’s rendering shows a jumbotron facing Bowery at roof level. 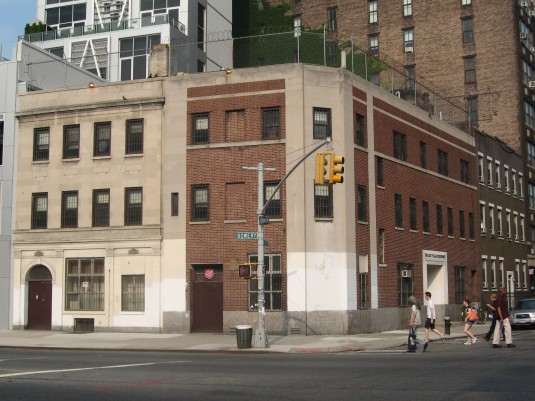 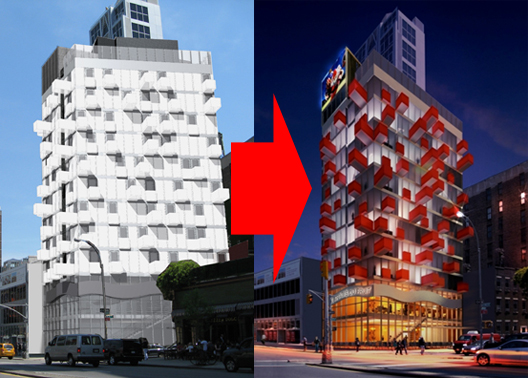 Unless we are starting fresh and creating a neighborhood where there once was none, we must look around, assess the nature of the area and build what is suitable. Mimicking the surroundings is an option but not very forward thinking.  When the Bowery Hotel was built, it gave an elegant nod to the neighborhood with its floor-to-ceiling leaded windows, the fine quality of the brick used and the gracious setback.  Respectful, yes, but inspiring, no.

Compare that to the magnificent and powerfully built Thom Mayne Cooper Union building and its nearby Bowery neighbor, Carlos Zapata’s Gehry-esque Cooper Square Hotel. While they are wildly different from one another, they have a stylistic cohesiveness that creates a new visual language for the neighborhood; one that suggests a nicely choreographed interaction between buildings. 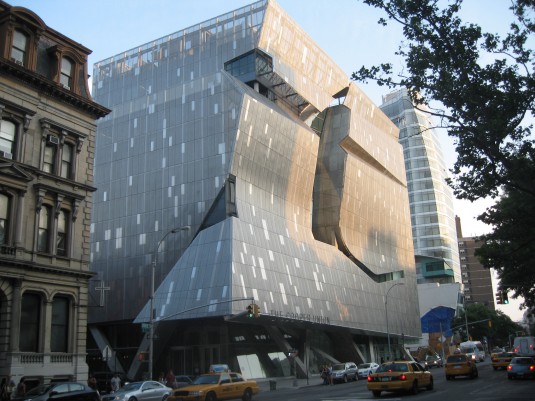 The Fumihiko Maki building, with its proximity to the Mayne and Zapata structures, will begin to create a bridge between the East Village and NoHo. This building will dance well with its neighbors.  The Kaufman building wants to do the Hustle.

According to Kaufman, “Until recently, the Bowery was one of the last places one would go to find great design, or great food, but now that it is already the epicenter of cool, this project will advance the qualitative side, bringing established, internationally renowned hoteliers and restaurateurs and a new signature building that speaks about seriousness as much as—or even more than—style.”

I fail to see the great design in this building. Instead I see an uninvited pole dancer roller-skating in shiny silver hot pants around a sculpture garden. Kaufman feels that his building will bring the neighborhood into the present day. The Bowery, he said, “had become stuck in time”.  Given the nearby low-lying tenement buildings I assume he means it is stuck at the turn of the century.  But if he goes through with his design, we will have a loud and flashy building with its roots very firmly planted in the 1970’s. So much for progress.

Ann Weiser is a former television executive and currently an MFA candidate in the Design Criticism program at SVA. She is slightly obsessed with the comings and goings of her neighborhood.