The House That Ruth Built

Boston may have fouled when they traded the Babe, but the Red Sox got it right with Fenway.

Yankee Stadium in the 1920’s. Photo from the National Park Service archives.

I took my kids to Yankee Stadium a couple of days ago, braving the 97 degree heat. Our seats (29 bucks a pop) were in the upper deck, directly above third base. It was an awful, oppressive day to be out in the sun, but it felt like a historic obligation. We were saying goodbye to the House that Ruth Built (and John Lindsey rebuilt in the 70’s, poorly).

According to the special countdown scoreboard—sponsored by some company, of course…this is baseball in the 21st century, no naming opportunity goes unexploited—the historic stadium has forty eight regular season games left in its long, illustrious life. A new stadium is rising from precious South Bronx parkland directly across the street. It will have fewer seats, but way more corporate accommodations. After explaining why the right field seats were so close to home plate—it was configured, I said, to help Babe Ruth in the 1920s—my daughter asked, “So, why are they tearing it all down?”

A very good question. The current stadium is run down and antiquated, but no more run down and antiquated than Fenway Park was before its recent renovation. All of the stadium’s problems (and it has many: narrow corridors, too few bathrooms and, yes, limited space for lucrative corporate boxes) could have been addressed in a thoughtful renovation. But that would have required some sacrifice from the Yankees, who would have been forced to share space with the Mets until the renovation was complete. (This is what happened in the ’70s.) 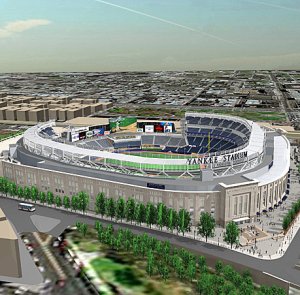 Rendering of the new Yankee stadium.

Instead, the city let the Yankees usurp parkland, with the promise that the team would replace it in the future. Keep in mind: the Yanks reneged on a number of its promises to the neighborhood following the 1976 renovation and the current plan places a lot of the new park land atop a parking facility. So the people of the Bronx lose a park—and they didn’t have enough of them to begin with—and the Yankees get, well…everything: a new stadium, a sold out final season in the old park (the Yankees website proclaims: “Farewell to the Cathedral,” which does beg the question: why on earth would you tear down a cathedral?), the 2008 All Star game, a Metro North station, and the promise of untold millions. Sounds like one of the most lopsided trades in baseball history.