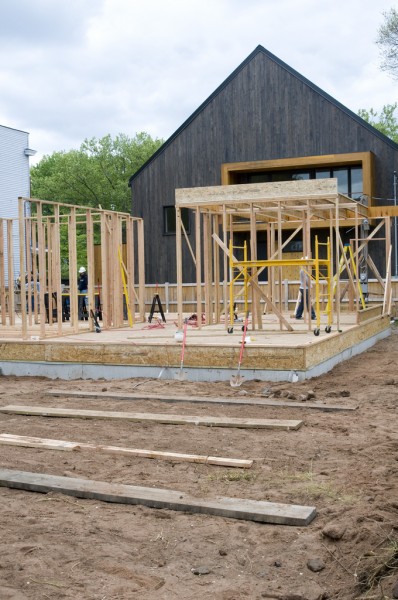 Left: A student poses with a high-pressure nail gun. Right: the house prior to the SIP installation. Photos: courtesy the Vlock First Year Building Project

By the start of this week, however unskilled we remain, most of us have at least gained some degree of construction experience. In week three, every student was put through three exhausting five-hour shifts of loading and unloading construction materials, firing nail guns, balancing on ladders, and hammering (and missing) nails. One could say that our bronze tans were scorched by this shared baptism by fire. By the end of the week we had poured the basement slab, laid the carrying beam, covered up the basement, and finished the stud wall framing for the ground floor. That left us in anticipation of the SIPs’ (structural insulated panels) arrival on Monday.

Five weeks ago, my design team argued for a construction system that relied heavily on pre-fabricated SIPs. This system would save the construction team precious time, which could then be spent carefully crafting interior installations. We made the pitch that installing these panels would be a breeze compared to traditional, and tedious, stud-framing. But the almost Pavlovian association we created between “SIPs” and “easy” masked the numerous challenges we would confront to implement the system. For a start, many of my dedicated classmates pulled a stressful all-nighter two weeks ago to complete the shop drawings for our SIPs order, even though a final paper was due the following day.

Because of the unexpected stresses hitherto involved, nobody knew if the SIPs would spring any more unwelcome surprises. In fact, most of us simply didn’t know what to expect. Fortunately, our collective sense of anticipation was eased when the delivery truck arrived at noon on Monday. The panels were annotated correctly, indicating which orientation they faced and where they went on the facade. It just a matter of some more hefty physical labor to organize the panels on site so that they were near the spots where they would be installed. 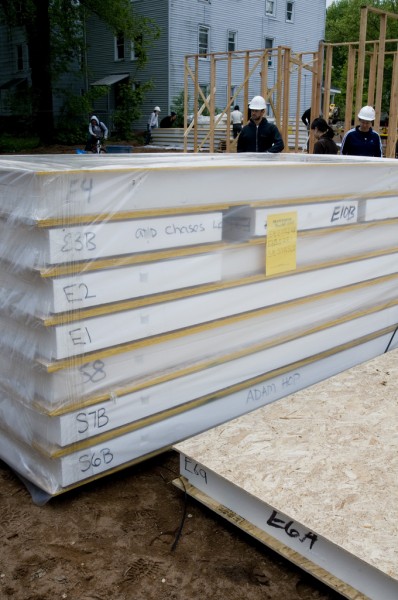 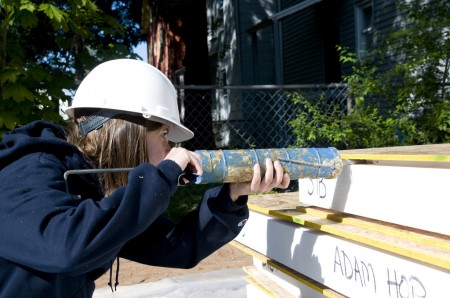 Left: The SIPs arrived on site annotated and ready to be assembled. Right: Lining the edges of the panels with adhesive

An SIP is, in effect, a massive piece of foam sandwiched between two pieces of oriented strand board. The foam sandwiches looked rather appealing—sort of like giant-sized versions of the foam-core I used to make my models in the studio. Plus, the splines we received fit the SIP panels like a glove. To tighten their embrace, however, we added generous dollops of adhesive, let loose with cathartic rounds of nailgun shots, and applied sheer brute force. I forgot to mention: the SIPs panels are very heavy. Raising them to the second floor for installation posed a distinct challenge. 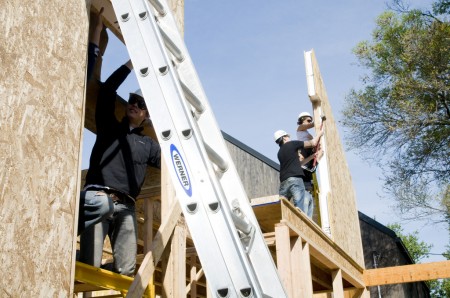 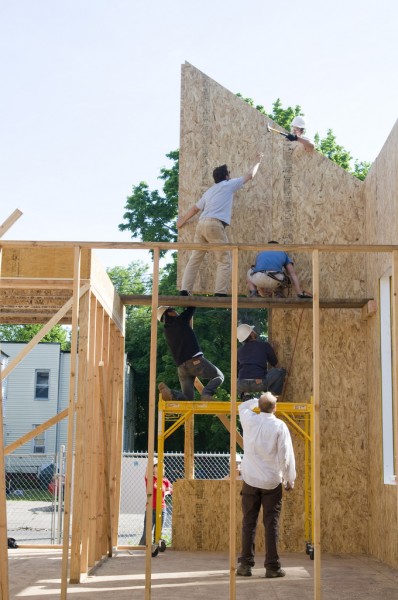 Before installation, each SIP is first prepared by two students, who line the panel’s edges with adhesive and fit the connecting splines. In a muscularly demanding endeavor, the panels are subsequently hoisted onto the sill and locked into the other standing panels. Inevitably, amid all the hoisting and pushing, nasty dollops of grey adhesive make their way onto our hands, where the pasty substance loves to linger despite attempts to soap it off. (Our teaching assistant had the misfortune of getting some in his hair, and I’m sure he contemplated shaving it all off.) 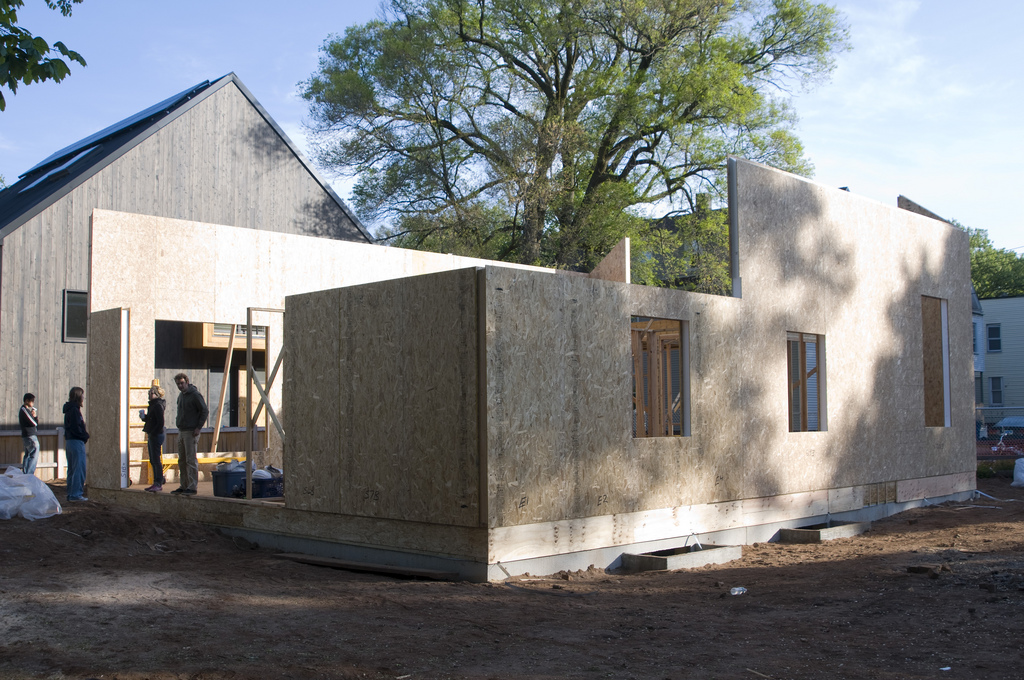 The house at the end of the first week, with SIPs installed

All in all, the SIPs panels provided much fun, agony, and sheer exhaustion. But compared to conventional stud framing they were probably a breeze. And, by the end of the week, the fruits of our labor were evident. The shell of the house had emerged half-formed out of the previous week’s nothingness. It’s almost surreal to see the house take shape so quickly, given that it existed only in drawings a month ago. For now, I am just relieved that my Monday shift next week coincides with graduation day. I could definitely use a break.

The Vlock First Year Building Project is partnering with Common Ground, a national supportive-housing developer, and the Connecticut Veterans Administration to build affordable, fully-accessible housing for female veterans. Check back next Monday for the fifth installment of the students’ weekly blog for Metropolis.