The caption was promising. “Cloud is a work of experimental architecture,” it said, “a floating roof made simply from helium gas, water and soap; an instantly deployable canopy for conversation in the shade.” In reality, it wasn’t quite so deployable. Little clouds of soap foam did rise into a net spanned over Asif Khan’s installation—but […]

The caption was promising. “Cloud is a work of experimental architecture,” it said, “a floating roof made simply from helium gas, water and soap; an instantly deployable canopy for conversation in the shade.” In reality, it wasn’t quite so deployable. Little clouds of soap foam did rise into a net spanned over Asif Khan’s installation—but they sadly yielded to gravity before even getting close to building up a canopy. Unsurprisingly, nobody chose to have a conversation in the dripping soap, except for children.

The British architect Asif Khan was one of three winners of Design Miami/Basel’s Designers of the Future Award. While the world’s most exclusive design fair nominates one established Designer of the Year in its Miami edition every December, it presents the most talented newcomers of the year in its Basel venue in June — and commissions them to present a specific piece for the show. This year — the fair took place from June 14 to 18 — Khan, Singapore-based Studio Juju, and the duo mischer’traxler from Vienna were asked to present a “conversation piece”: a piece enhancing dialogue rather than being talked about.

Cloud was certainly more inventive and charming than Studio Juju’s piece, [A Tent], which comprised a space defined by tent pole-like rods plus a few chairs. But mischer’traxler’s contribution met the brief just brilliantly. Their piece Collective works is a machine that only sets to work as long as it gets attention. The more people come together and watch, the more diligently it produces a basket and the more colorful that basket becomes. As soon as the audience parts and walks away, the machine ceases all work. Thus, Collective works did not only enhance dialogue, but actually required it to function.

While failing as a canopy, Cloud was a useful symbol for the state of young contemporary design. How do you assess the long-term value of a designer who hasn’t proved himself yet? How do you know what’s going to last—and what’s just a bubble? Design Miami/Basel’s audience—collectors spending thousands of dollars on a piece—asks these questions for a legitimate reason. Nobody wants his investment to dissipate into hot air. As a result, collectors stick to what’s tried and tested: historic design.

The Rise of the Collectible Design Market 2005–11, a market report by the British think tank DeTnk, claims 32 percent of the global design market for postwar, mostly French design. Only 7.83 percent of all business is made with contemporary design. Of DeTnk’s top five bestselling designers (all of them dead), three were shown by one or more of the 43 exhibitors at Design Miami/Basel: Emile Jacques Ruhlmann, the French master of Art Deco; Jean Royère, another designer from the early 20th century; and, more than any other, Jean Prouvé.

The French architect and designer seemed ubiquitous. Right by the entrance, the French Galerie Patrick Seguin presented a whole house by Prouvé, mounted and dismantled on a daily basis. The prefabricated structure was once designed for refugees who had lost their homes to Nazi air raids. More than half a century later, Seguin offered it for $969,000. Although beautiful, it didn’t sell, but Prouvé’s smaller pieces went like hotcakes. A wood and metal dining table from the 1940s, for instance: sold for $201,000. Another table plus six chairs: $172,000.

Jean Prouvé is so popular that he is even being re-edited—for the not yet so wealthy. Furniture manufacturer Vitra presented nine new/old pieces during the fair, in collaboration with the fashion company G-Star. And while they were well done and elegant, one couldn’t help asking, if the world really needs another re-edition of postwar classics. It does, so it seems, as long as nobody seriously questions the price tags of up to roughly $6,000.

A 1951 Prouvé fauteil re-imagined for the RAW collection by G-Star. Image courtesy Vitra.

Only twenty years ago, original Prouvé pieces were available for the same price and even less. Only a few experts and optimists knew that the Frenchman’s work would skyrocket shortly after. Vitra’s re-edited chairs, tables, stools, and lamps, however, will be more or less worthless on a collector’s market twenty years from now. It’s always the originality that increases the value, and thus price of an object—the originality and the way in which it reflects its specific time.

Looking at Asif Khan’s work however, it is quite possible that his originals, too, will once be sold for very high prices—regardless of dripping soap bubbles. Cloud and other pieces by Khan talk about the impermanence of architecture, of objects, and eventually of truth and reality. Thus, they reflect our time perfectly in a very original and also charming way. The same holds true for the Dutch duo Drift, whose Fragile Future luminary was shown at the booth of London’s Carpenters Workshop Gallery. Made of LED and natural blowballs, the structure demonstrates our environment’s vulnerability in a most poetic and, at the same time, pressing way. 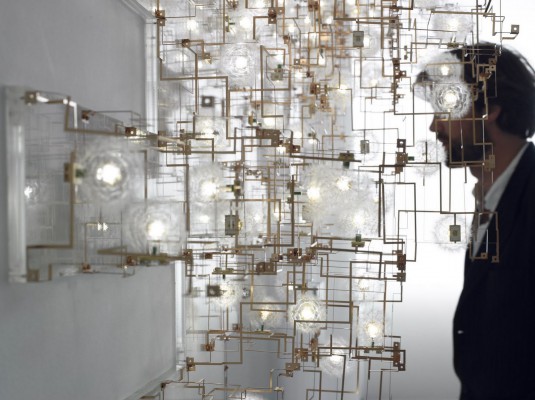 mischer’traxler’s Collective works machine might be “a sissy”, as Katharina Mischer, one half of the Austrian design duo, called it. But it brings people together, thus resisting to the alienating and isolating technology we know today. The Italian duo Formafantasma, seen at Gallery Libby Sellers, presented textiles and ceramics that referred to Italy’s colonial history—and also raised criticism to its xenophobic present. Like good works of art, all these pieces address contemporary social, political, environmental, moral, and cultural issues. And being design instead of art, they also fulfill a function—or try to, at least. 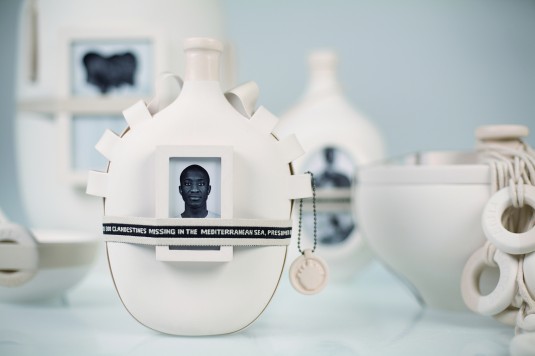 In their time, Jean Prouvé, Emile Jacques Ruhlmann, and Jean Royère did the same. They were innovative, original, and highly creative. They talked about the promises of the machine age, before it devolved into plain reductionism. They delved into oblivious glamor, before it headed for the same destiny as the Titanic: sinking. At their time, Prouvé, Ruhlmann, and Royère spoke about their time. In 2011 however, their work is history–beautiful, but antique, floating in a distant past like an Empire chaise longue or a Biedermeier dresser.

It is perfectly fine to collect antiques. It is a safer investment than contemporary design and it is less disputable. But Design Miami/Basel took place at the same time and venue as Art Basel, the world’s biggest fair for contemporary art. Many collectors visited both fairs. Many bought most progressive works of art without hesitation. Why then did they remain so cautious and conservative when it came to design? Why did they see bubbles where, at closer inspection, it was all about the zeitgeist? Maybe it’s because they are not actually looking for design as a cultural discipline, but plainly for a couch to go with their newly acquired Ai Wei Wei. What a sad misconception of design.

Amelie Znidaric is a Vienna based design writer and critic. She recently received her MFA in Design Criticism from New York’s School of Visual Arts. Her writing has appeared on the German design and architecture platform Stylepark, the Austrian daily Die Presse, and domus online, among others.