Some Advice for Young Designers of the 21st Century

Commencement at the University of Arkansas Fay Jones School of Architecture.

I spent two glorious days this May in Arkansas experiencing the Ozarks with their rolling hills, springs that bubble up in the woods, thickets of vegetation everywhere, and the terrain populated by institutions of intellectual life as well as those with less lofty purposes. I walked for hours through Moishe Safdie’s evocative Crystal Bridges Museum of American Art in Bentonville and took a hard-hat tour on the university’s campus of Vol Walker Hall in Fayetteville. Soon to be completed, the ingenious connection between two historic buildings and an unapologetic modern addition were designed by the irrepressible Marlon Blackwell, the chair of the architecture department. When occupied, the new Fay Jones School of Architecture will join forces with the landscape architecture and interior design departments. The promise of collaborative problem solving between these specialties made me think of all the academic silos that are still firmly in place, to the detriment of our designed environment.

Commencement brought together 75 students and their families in a no-nonsense, unpretentious auditorium where the young scholars transitioned from academia into the bigger world. The talk I delivered on the afternoon on May 11th is re-constructed from my impromptu notes. It is, however, true to the spirit and word of my intended message to the graduating class.

The speech I wrote back in cold and rational New York City now seems too cold and rational, somehow alien to this beautiful, green place. So I tore it up and decided to get personal. I got up at 5 this morning and made some notes about the importance of each of us finding ourselves through a lifetime of learning.  To begin with, ask yourselves this: What are my basic interests?  Here is my own, short case study.

Ever since I can remember, I was somehow involved in reading and writing, observing and painting what I saw. Early on my own pattern began to emerge—telling stories with words and images.

As a kid living in displaced persons’ camps in Austria, after the Hungarian Revolution was crushed by Soviet tanks and my family escaped through a heavily guarded border, I was transported to a whole new world.  Someone gave me a small notebook and some color pencils—I have a feeling it was my Dad who passed the word about my interests in recording the world around me—and I began drawing what I saw. I sketched the first orange I ever ate. I sketched the castle in Salzburg…. I didn’t know it then, but I was a junior photojournalist. I was telling stories with pictures and words.

I read everything. First in Hungarian, especially when we settled in New Brunswick, New Jersey, and found the beautiful Beaux Arts public library with its collection of Hungarian literature high up in the rafters. When I told my parents what I found there, we started having conversations about what I read, the beginning of a pattern we followed until the day they died. Later, of course, my readings were mostly in English. In all this time, I understood that reading is discovery. It’s an adventure. It opens up a whole new world you haven’t yet imagined.  Language, words, ideas, thoughts occupied me endlessly and lead me to study history and sociology, while I was equally fascinated by art and architecture.

Each of us encounters at least one big learning experience in our lifetimes. Mine was leaving Hungary with nothing but a change of underwear tucked into my Dad’s briefcase. Lessons learned? Family, whatever form it takes is irreplaceable. Stuff doesn’t matter.

I grew up in a New Jersey college town and after graduation decided to travel. My destination was Hungary, to reconnect with my roots. On my way to the heart of middle Europe, I was attracted by cities. The rapid movement, the crowds, the many things to see, including art and architecture, came to define me as an urban person. When I returned to New Brunswick, I wanted to work for a magazine—my word-picture obsession got a focus. Publishing was in New York, the city I was most drawn to. There was a recession on. No jobs. I did get one job at a porn magazine where I was to write the letters to the editor. Here I faced my first ethical dilemma. Was I ready to deal with a subject that offended me? Could I tolerate seeing human degradation on a daily basis and what would this do to me? The work itself was based on a lie. Real readers write their own letters to the editor, letters are not manufactured by some green college grad. I resigned the porn magazine job before I began working there. I forgot to mention another deciding factor for my resignation. A haze of marijuana smoke pervaded the office. And I, along with Bill Clinton and I’m not too sure about him, did not, could not inhale the smoke, it burned my throat.  And I did not want to learn to like it, either.

Eventually, I did find a magazine job—finally entering my world of words and images—this time about food service and vending management. While the subject wasn’t mine, I did learn everything about how magazines are made.  This was the beginning of another lifelong pattern: learning on the job. Later when I began working on a design magazine, Interiors, I found my subject and the fascinating people who make our designed environment; not only was the work beautiful but the designers themselves were fascinating. They had the best clothes, the most interesting watches, went to the latest museum and gallery shows, and loved experiencing architecture.

I also learned what it takes to get the job done. For me, this was the discipline of magazine deadlines. Without that discipline I would just be exploring and loving every minute of it.

Now, let’s look at you and what you can learn on the job, starting with whatever your first job may be. You leave here with the basics; the foundation for what comes next. Now the real learning begins. Here are just three evolving areas that need your attention:

Green design is in its infancy. What we know today is just the beginning. How about figuring out ways that a building can breathe on its own? How can it recycle and re-use its own water? How can it grow food and other vegetation and connect to other buildings and gardens surrounding it? How can it produce its own energy?

Accessible environments: The Americans with Disabilities Act, passed by Congress as civil rights legislation, is 20-plus years old. In that time designers have been complying with the law, rather then designing beautiful environments that help everyone lead productive lives. How about figuring out a whole system of way finding? In fact, how about applying systems thinking in everything you design?  Streets, buildings, products need to be made safe and designed for use by everyone, including people in wheelchairs, the sight impaired, the hearing impaired, the growing number of elders.

As designers you have the knowledge and responsibility to be advocates for human and environmental wellbeing. That is something meaningful to keep in mind as you start your journey of life-long learning.

Take any job you can get, except one that poses an ethical conflict with your personal standards. Observe everything. Be curious. And get yourself prepared to rebuild our world to the specifications of the 21st century.  A human-centered, earth-aware, tech-connected society needs your help, your special skills, and your vision. This century is waiting to take on it’s own shape. You are the ones who will make this happen.

How will you design the great adventure of your lifetime? I’ll be watching over you as long as I can hang on to this amazing life of mine. Then, you’re on your own! 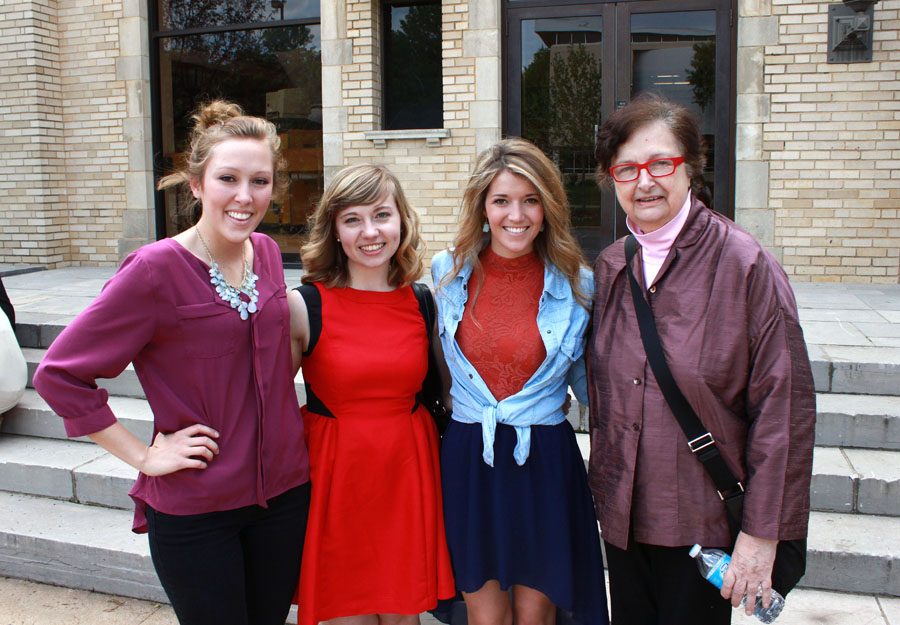