In its new headquarters, the American Society of Interior Designers tackles the next big challenge for workplace design—helping office-goers stay healthy. 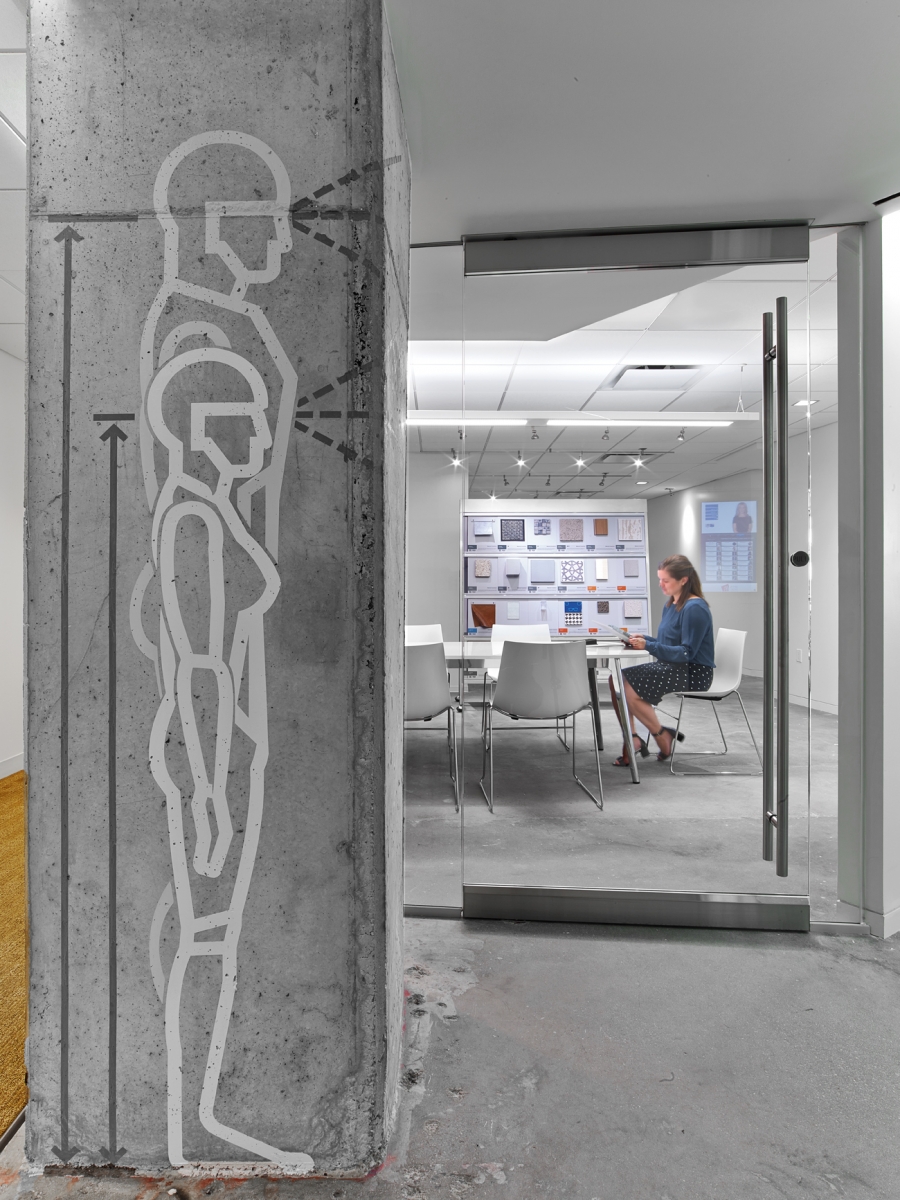 The entrance to the new American Society of Interior Designers headquarters in Washington, DC

Role models bear a great burden, particularly when setting the standard for an entire industry. Often they must forge into unfamiliar territory and be willing to act as guinea pigs for the sake of innovation.

Such a responsibility wasn’t taken lightly by the American Society of Interior Designers (ASID) when it set out to design its new headquarters in Washington, DC. As a major professional association, it knew it needed to aim high in order to inspire higher standards within the industry. ASID’s board of directors, along with CEO Randy Fiser, envisioned the new space as being the “workplace of the future”—a living laboratory that could prove exactly what is possible in office design.

This somewhat lofty vision was focused not just on sustainability but also on wellness, aiming to show, in quantifiable and certifiable terms, how interior design can contribute to environmental and human health. “As an organization, we cannot become complacent,” says Fiser. “We must evolve to stay at the forefront of design innovations. If we achieve WELL Building Standard and LEED CI platinum certification, we will be one of the first spaces in the world to reach both.”

The task of bringing the vision to life fell to architecture firm Perkins+Will. While the opportunity to integrate the WELL Building principles with such rigor proved new territory for the firm, its architects have long been engaged in sustainable design. Ken Wilson, design principal for the ASID project, worked on the 2009 U.S. Green Building Council headquarters, which incorporated the principles of biophilic design, among other aspects.

Wilson says that one of the challenges of adhering to LEED and WELL standards is keeping everything in check. “There are hundreds of materials that go into a project and hundreds of people who end up touching it, so you have to ensure that what you designed and specified actually happens.” He adds that, to prove that responsible design needn’t be excessively expensive, ASID was also adamant about sticking to a reasonable budget. “It takes a client with exceptional vision to do that, and this was a very aspirational project.”

Many of the office’s most impressive features are invisible to the naked eye. All specified materials in the space were stringently evaluated to eliminate substances that could potentially have negative health effects. Furniture either is certified under the BIFMA level standard, Declare, or Cradle to Cradle, or comes with Health Product Declarations. These strict guidelines apply equally to all products from donors, including Teknion, Lutron, USAI Lighting, Steelcase + Coalesse, Herman Miller, Humanscale, and OFS Brands. Even the air in the office is tested for formaldehyde, carbon monoxide, ozone, nitrogen dioxide, and radon levels, as well as for total volatile organic compounds. 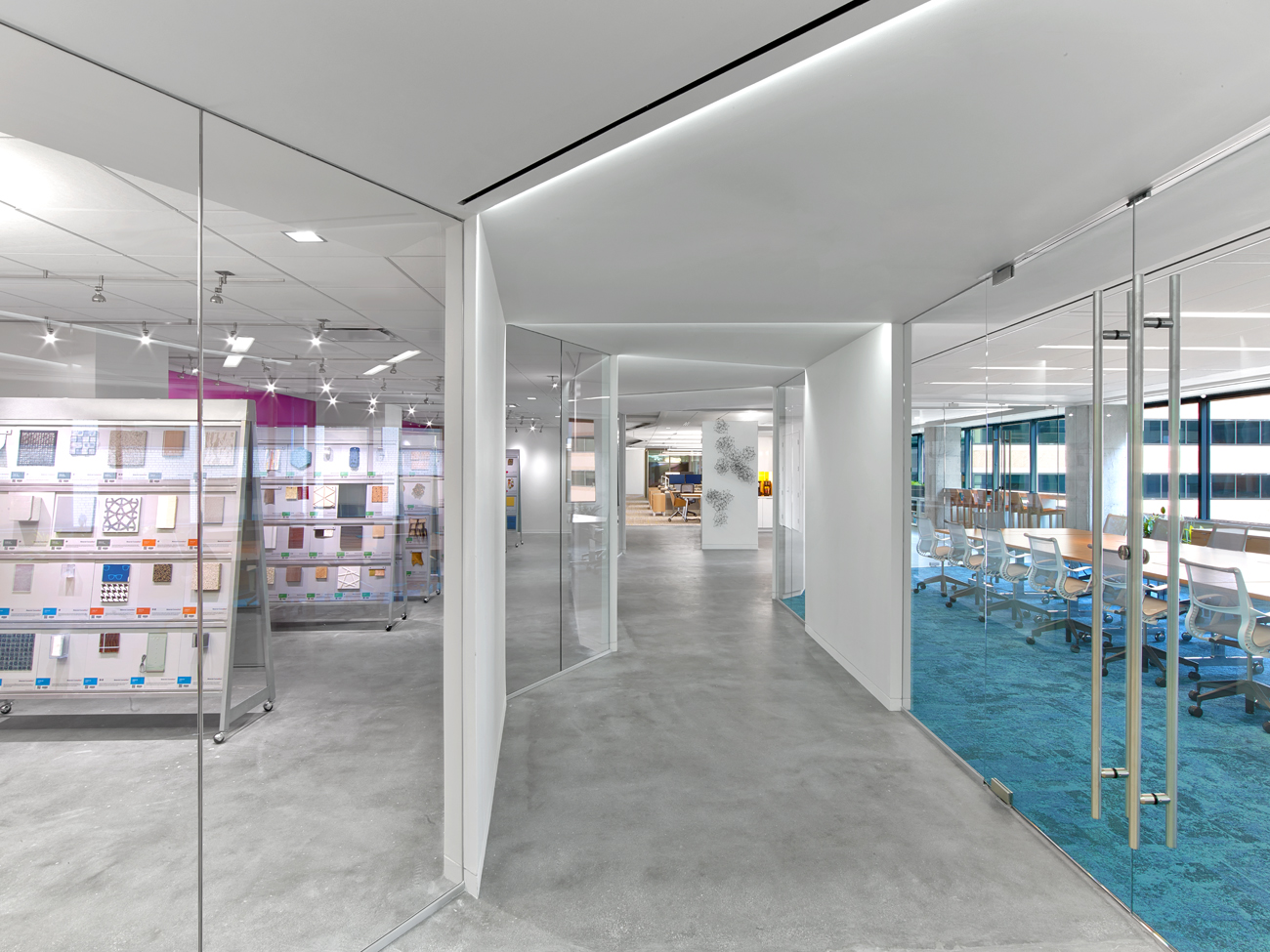 ASID also envisioned an office built around the idea of unassigned seating, so that employees could choose from work environments with varying levels of sensory engagement to suit their needs for that day. This meant a combination of more traditional solutions like sit-stand work desks, as well as casual, ad hoc spaces such as sitting rooms for quiet contemplation, communal tables, or window-facing bar seating.

Regardless of their chosen work vantage point for the day, everyone is guaranteed a view of the sky. Aside from meeting rooms and unassigned offices (which can be reserved for the day or a few hours), the only workstations that are sectioned off are those used by ASID’s membership support staff, who spend a large portion of the day on the phone.

Joseph Cephas, vice president of communications, says that already people have found preferred nooks within the office. “I wondered how I would go picking a different workspace every day, but it turns out I love it. Working in a different space every day is good for productivity. Yesterday I think I worked in three places.”

When a yearning for solitude takes over, staffers can retreat to the soundproof meditation room, which contains a yoga mat and a stability ball. In the kitchen-café, employees are enticed into healthy eating habits by a platter of at least five fruits and vegetables made available each morning. ASID provides a coffee machine, but cups are limited in size to discourage excessive caffeine intake. Filtered drinking water dispensers are located within 100 feet of all regularly occupied floor space, and water is tested quarterly for lead, arsenic, mercury, nickel, and copper. 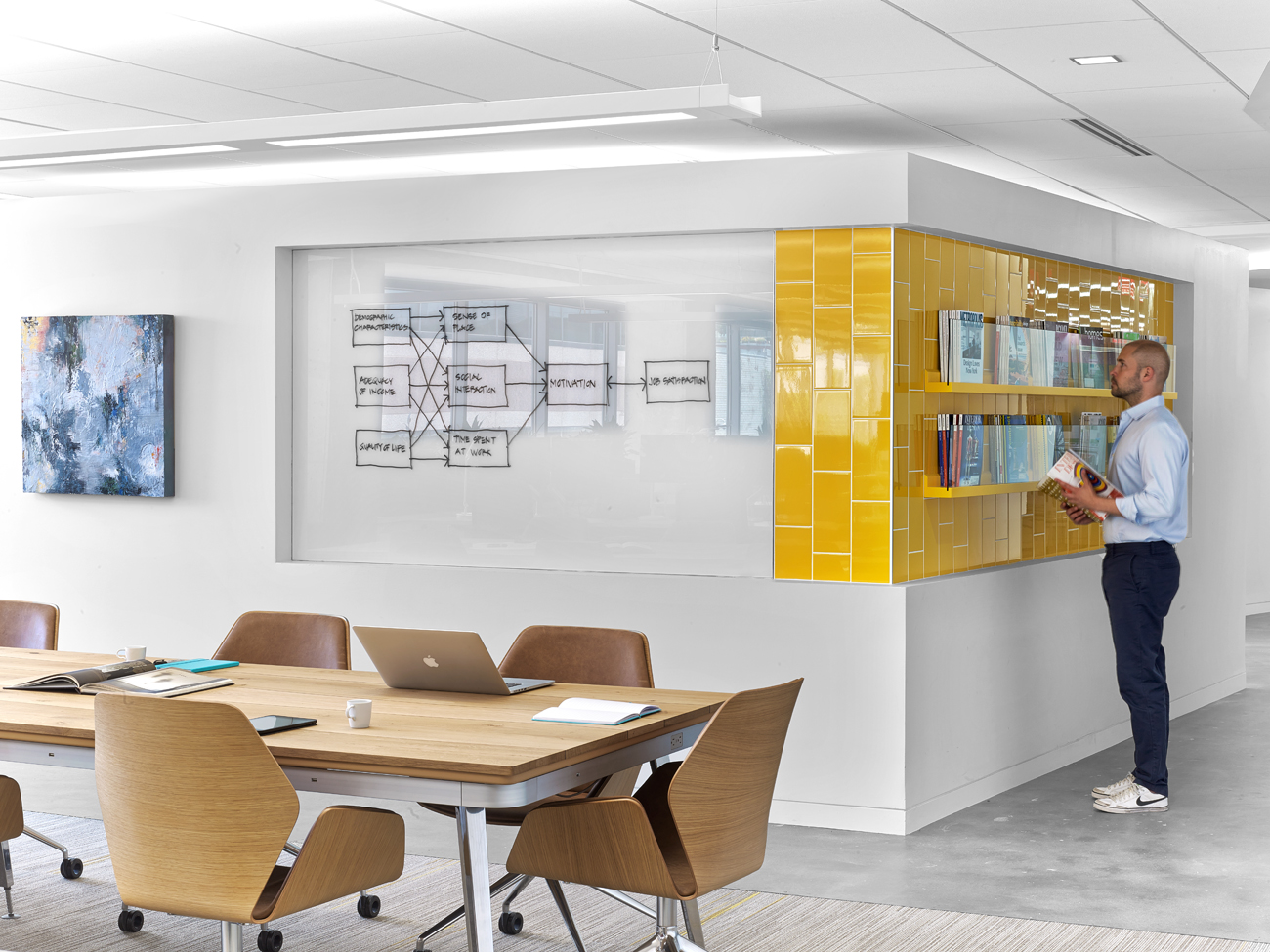 Sherwin Williams whiteboard walls (below) can also be used for brainstorming throughout the office.

Going far beyond the token office ficus, biophilic design also played an important role. A series of plants is strategically placed throughout the office, intended to help reduce stress and elevate cognitive and emotional performance. A sophisticated circadian lighting system from USAI Lighting, Color Select, mimics the daily color temperature cycle of natural daylight, while fully automated Lutron shades respond to the location of the sun and weather conditions. By minimizing the disruption to natural circadian rhythms, the system helps employees maintain better, regular sleep patterns and can benefit overall well-being. Around 75 percent of desks are within 25 feet of windows with views to the exterior, while desk lamps are designed to prevent glare and eyestrain.

To measure the impact of the new office on employee health, ASID conducted a preoccupancy test to monitor work behavior and performance, using an online assessment tool developed by Michigan State University. The association also made use of Cornell University’s 3C Design project—which employs sociometric badges to collect big data on connectedness, collaboration, and creativity—and its environmental satisfaction survey, which measures noise, air, and light conditions and analyzes how they affect sleep and sick days. A post-occupancy test will take place six months to a year after ASID’s date of moving into the space.

Perhaps the first sign of ASID’s success in leading the way for the profession is its influence on Perkins+Will. When asked how the experience of designing the ASID office has influenced the architecture firm’s integration of WELL Building principles into other projects, Wilson quotes Interface founder Ray Anderson, who once said, “There’s no such thing as a reformed environmentalist.”

“Will we take it to the extent that we did with ASID?” Wilson says. “Probably not, but it will definitely impact the way we work. Once you’re educated and you see the impact of what you’re doing, you can never go back.” As a sure sign of its trajectory, Perkins+Will recently announced that it would be the first company to adopt Fitwel, a new government-backed rating system for healthier workplaces, at all of its North American offices.

As is the case with any pioneering concept, the ASID team plans to make a few tweaks to the office, such as lowering the height of plants so that they don’t obscure window views. But since moving into the space in May, employees have already begun to see the benefits of working in an office attuned to health and well-being. “When I see someone raise the sit-stand desk to work in an upright position for an hour, or when we’ve had a stressful day so they take a few minutes in the meditation room, that’s a source of pride,” says Fiser. “I love that the ASID team is experiencing an environment that demonstrates the power of design.” 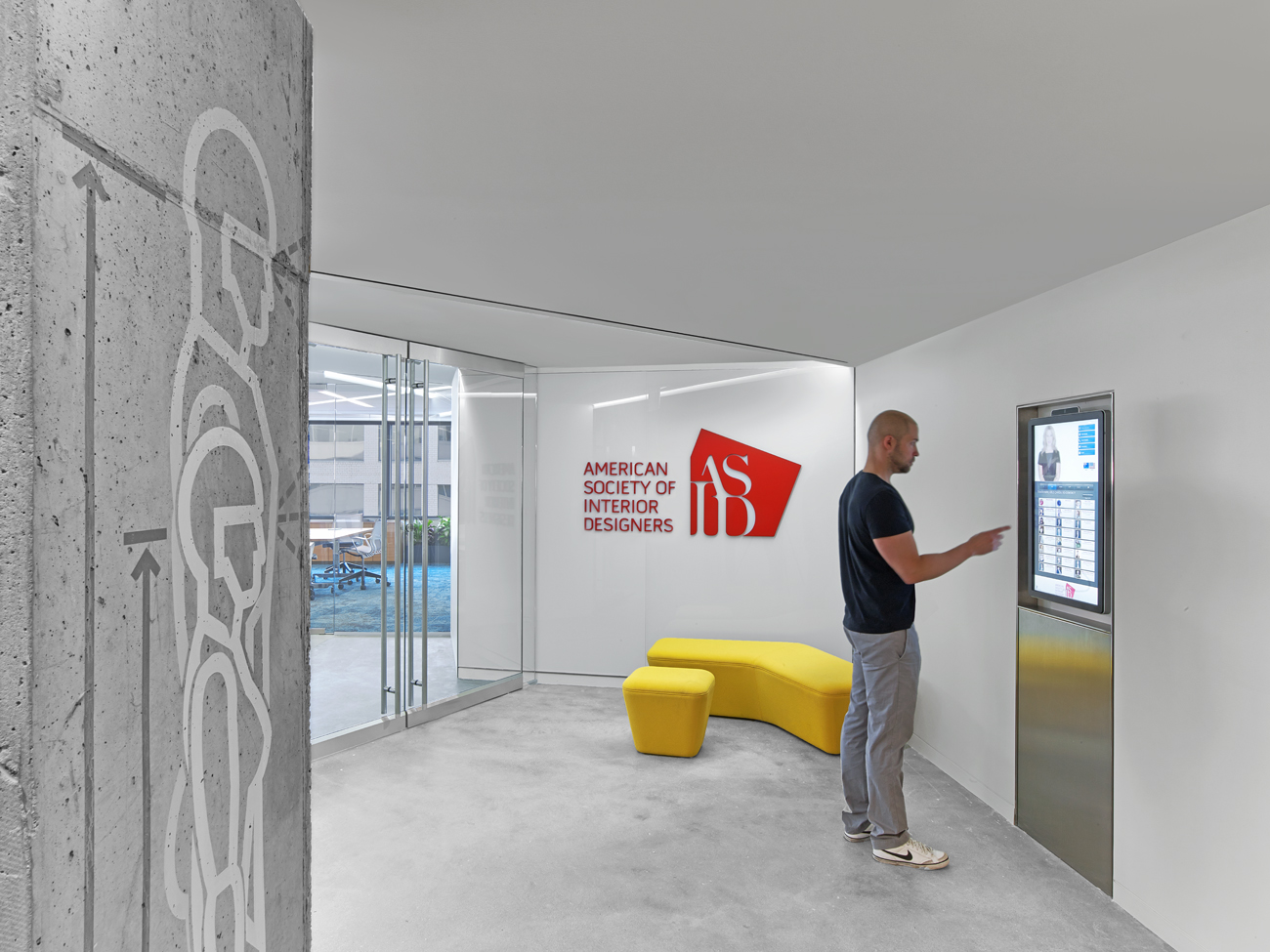 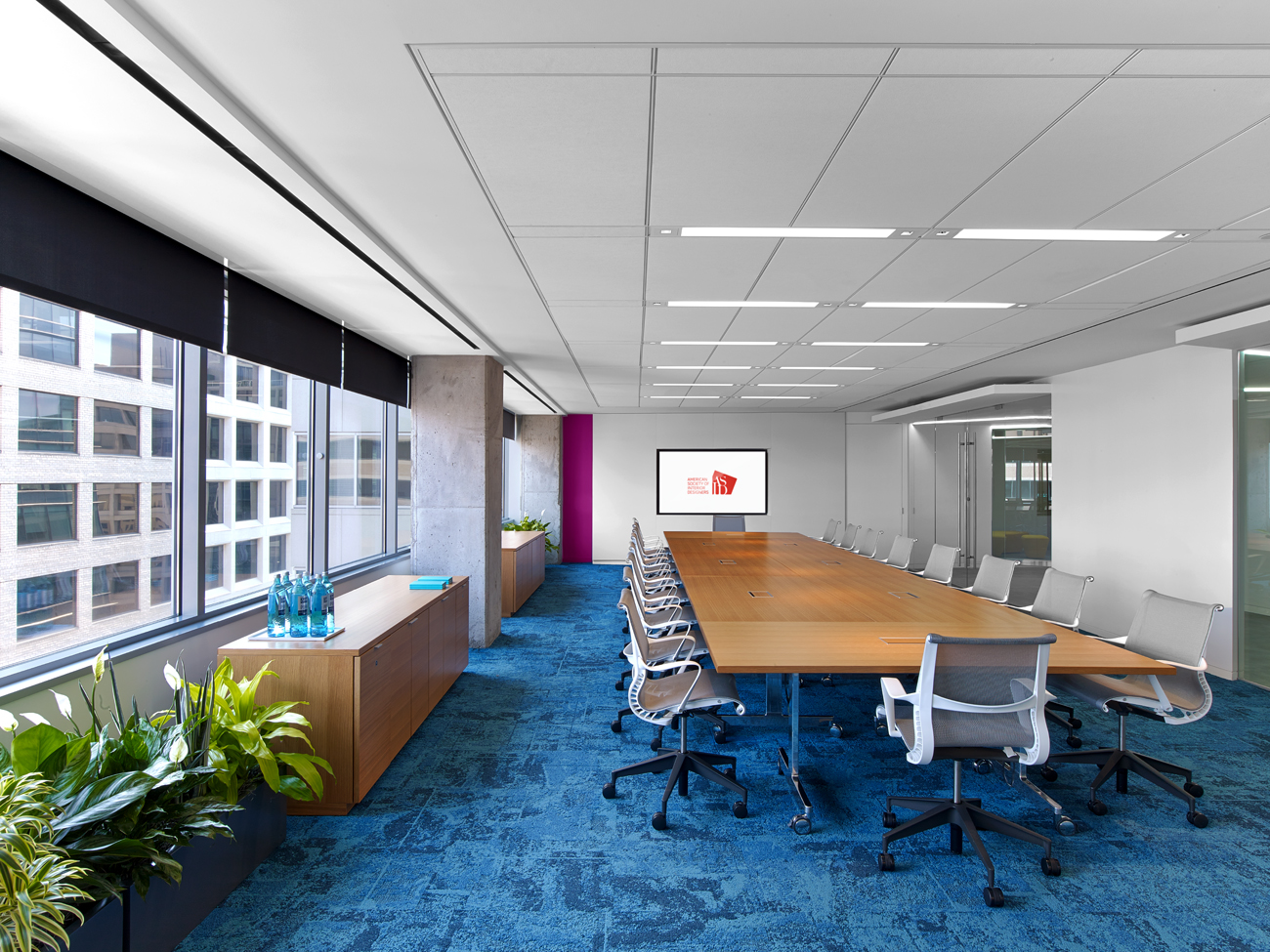 Biophilic design and a circadian lighting system from USAI Lighting with automated shades from Lutron that adjust to light levels are present throughout the office. 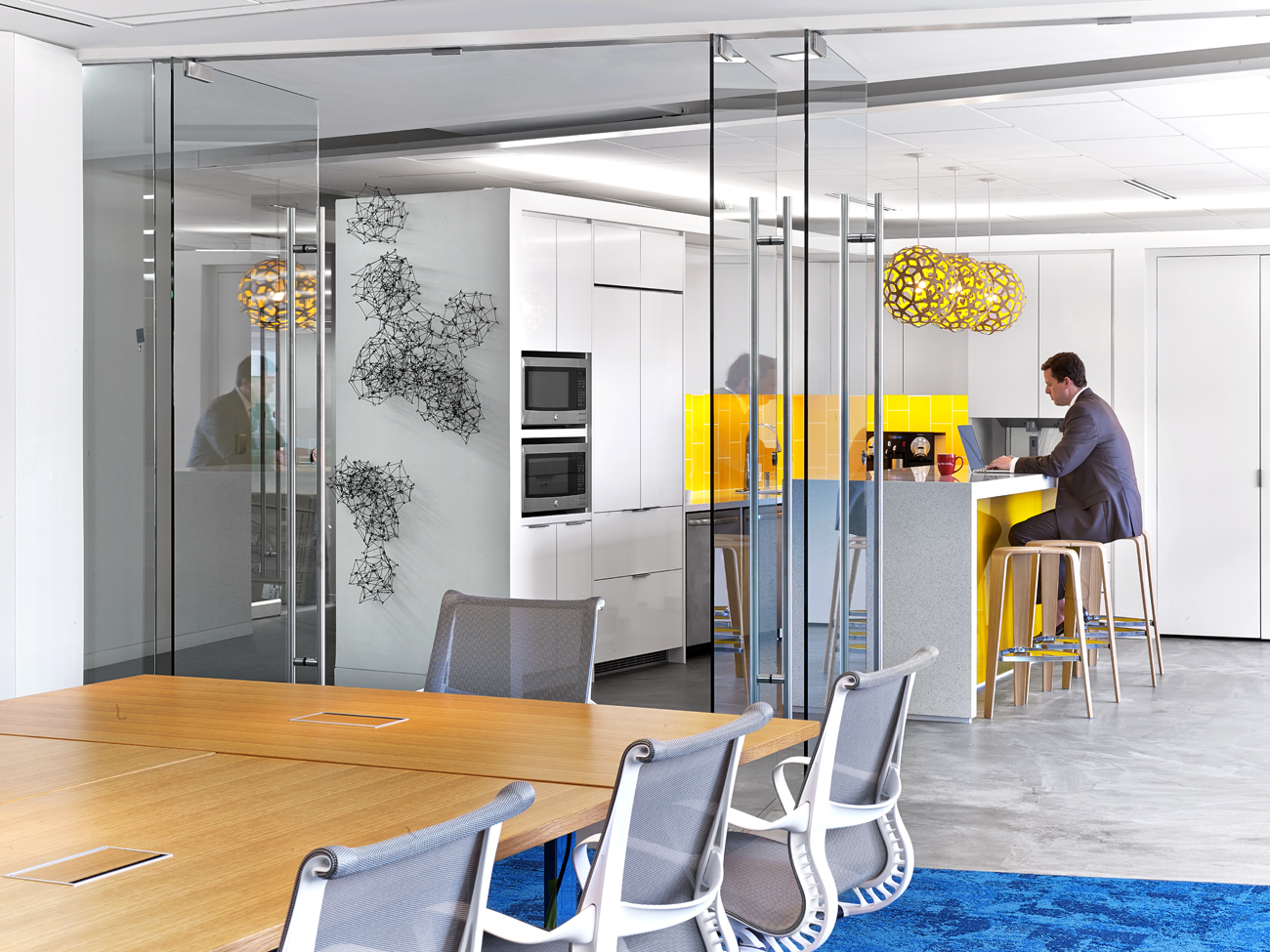 The kitchen-café area doubles as a possible workspace. Staff can help themselves to herbs from the nearby garden to add a culinary flourish to their meals or even take home. 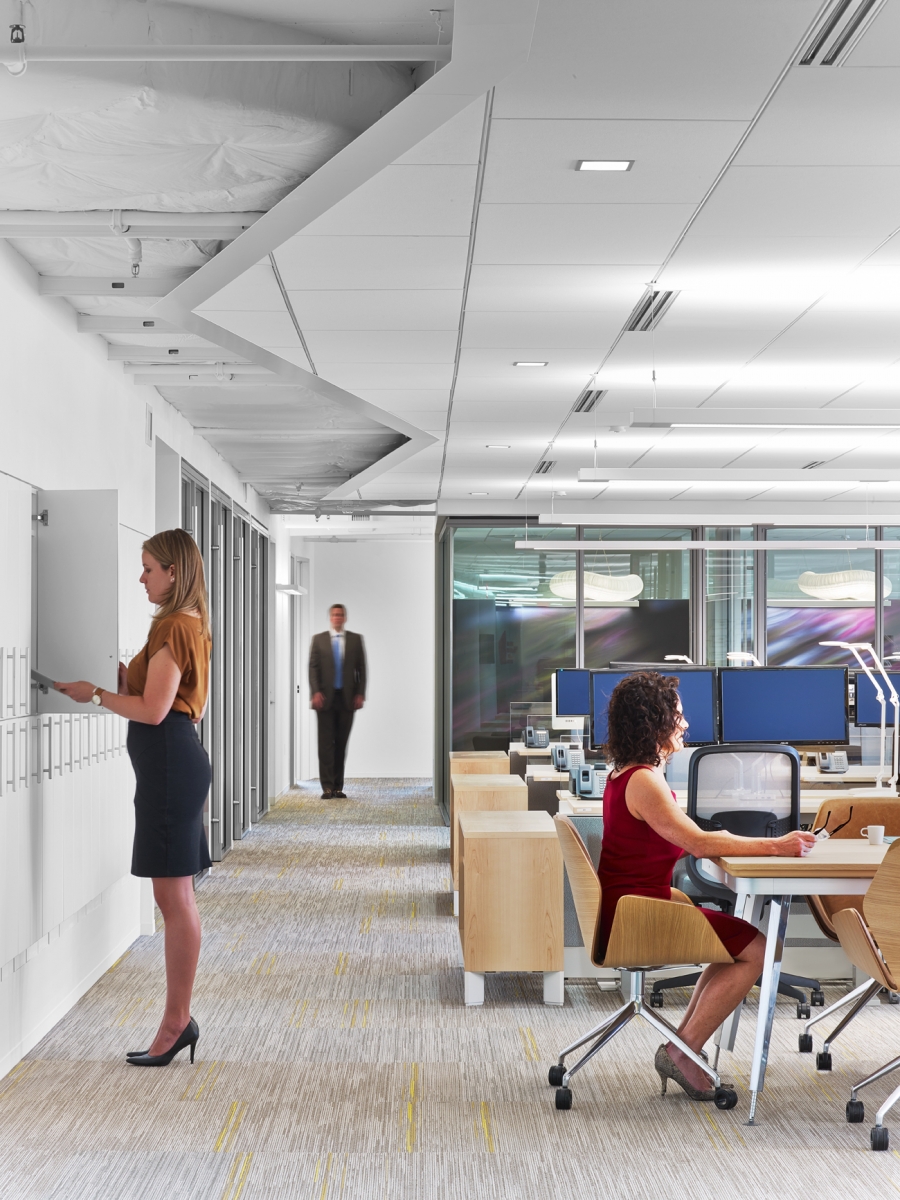 Since desks are unassigned, staff are allocated lockers, also from OFS, to store their possessions.