The film, ‘If You Build It,’ will be followed by a conversation with its stars, Emily Pilloton and Matt Miller.

A group of bored teens sit around in a classroom. Some yawning, some looking like they want to run away, some just plain indifferent. Is there a teacher among us who hasn’t seen these faces? But this is a different kind of classroom. It’s the brainchild of two designers, Emily Pilloton (trained in industrial design and architecture) and Matt Miller (trained in architecture). They have set up shop in the decaying town of Windsor, North Carolina where, like so many towns in the U.S., everything seems to have gone wrong. It’s no wonder that these kids have no juice left in them.

Emily and Matt are here to teach the kids about community-based architecture with some amazing results, both in the building arts and in community building—one person, one project, one detail at a time. This story is documented in If You Build It, an 82-minute film that introduces us to the kids (from an athlete who turns out to be a natural designer to a farmer who turns out to be a thoughtful builder), the recalcitrant school board, the hopeful members of the community, and above all, to the heroic efforts of Emily and Matt. They battle financing shortfalls, a school board that shuts down the project and fires their champion, and people’s natural skepticism about the ability of designers to make a difference. In this context, what they accomplish seems next to impossible. 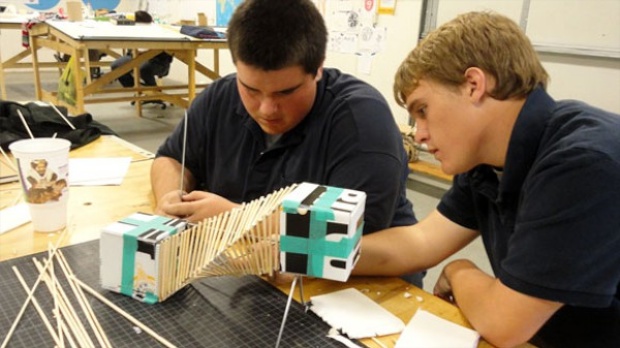 Students inspect a study model for a chicken coop.

I have been following Emily’s work since she first started Project H in 2008 and I loved the idea that she came to Metropolis Books to publish her now iconic book, Design Revolution: 100 Products That Empower People. Through the years, I kept track of her work with high school students and the many things they accomplished together.

Now it’s time for everyone, from designers to high school students and teachers to community organizers and policy makers, to experience the power house that’s Emily Pilloton and her partner Matt Miller in If You Build It. The film previews on January 10 at the IFC Center in New York City. (Tickets go on sale on January 6.) After the show Emily and Matt will converse with filmmaker Patrick Creadon, moderated by Mark Randall of Worldstudio. Emily’s TED talk is an excellent primer to the film.