When it comes to finding the safest ways to incorporate cyclists into the city’s streetscape, one-size does not fit all.

In our last post, we talked about the evolving playgrounds of New York. Here we explore another dynamic component of our built environment—the increasing formal integration of cyclists into streetscape design.

The New York City Department of Transportation (NYCDOT) reports that more people are riding bikes than ever before. This growth in ridership goes hand in hand with an increase in cycling infrastructure on our streets: since 2007, the DOT has built over 430 miles of bike lanes. Generally speaking, redesigning the NYC street grid to include room for cyclists has resulted in a 72% decrease in the average risk of serious injury for cyclists.

This new infrastructure provides key links between areas with limited transit options and nearby neighborhoods and community resources. Our firm has been highly engaged in this work, through our involvement with projects such as Route 9A in Manhattan, the Columbia Street bikeway in Brooklyn, and the recent Randall’s Island Connector and Food Center Drive in the Bronx. Our experience has proved that design solutions require a close investigation of specific site constraints and requirements—there is no one-size-fits-all approach to bikeway design.

The 9th Avenue bike lane makes the road safer by separating cyclists from both pedestrian and vehicular traffic, as well as shortening crossing distances for pedestrians. Planting reinforces separation and enhances the character of the street.

Adjacent to Hudson River Park, the Route 9A bike path spans the west side of Manhattan from the Battery to 59th Street, making it an important route for commuters and recreational cyclists. As part of the design team, our firm used planters to create a clear and physical boundary between transportation modes that also provides an important site amenity. The plant palette was selected for its hardiness and salt tolerance, as the site is impacted by both salt spray from the Hudson River and road salt from the adjacent Route 9A. Furthermore, as this is a transportation corridor, visibility is critical to safety; planting was limited at intersections to preserve sightlines, and shrubs were selected that have a low, spreading form. Some key species include Myrica pennsylvanica (Bayberry) and Cornus sericea “Kelsyi” (Kelsyi Yellowtwig Dogwood). 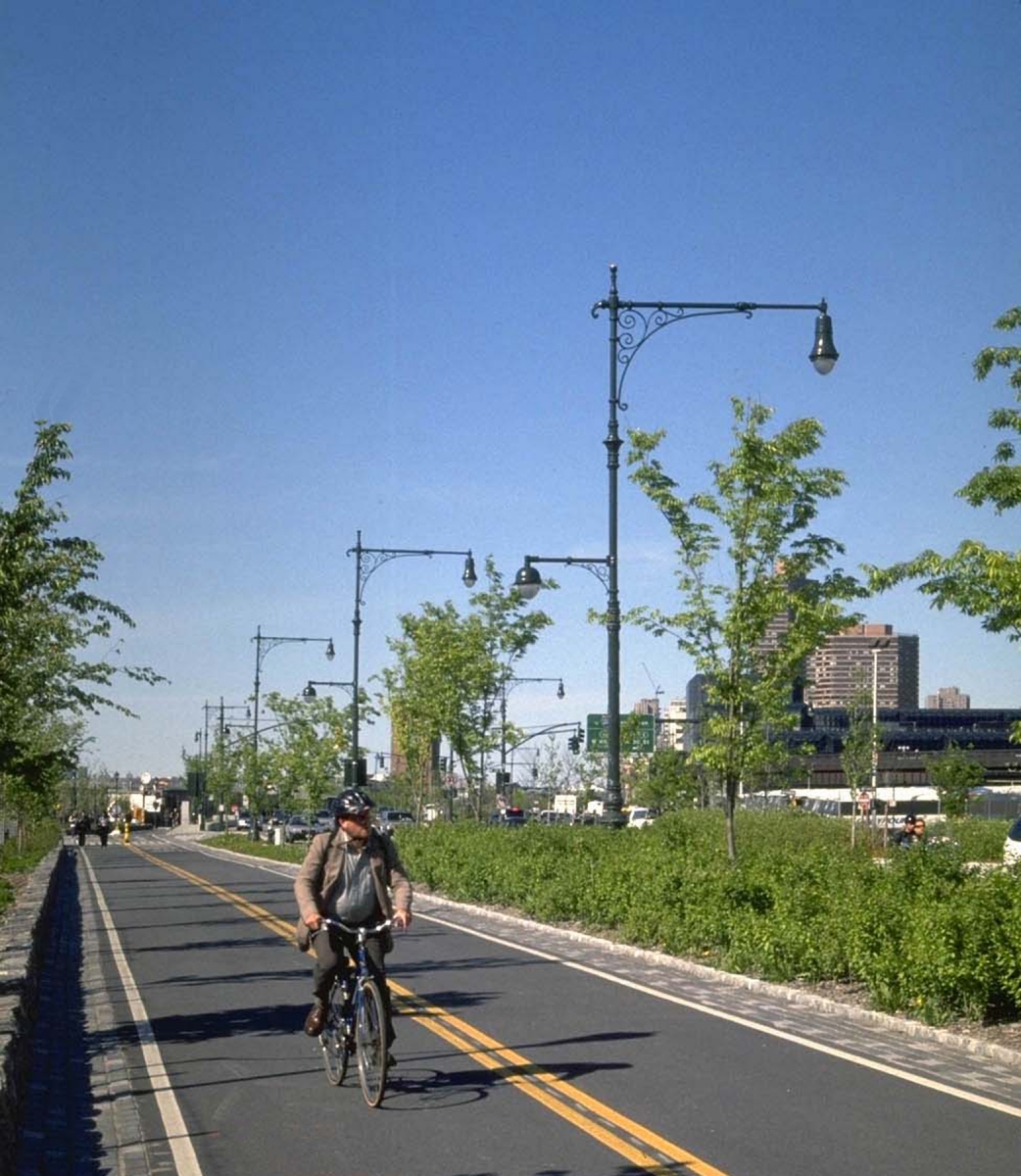 Completed in 2001, the bike path along Route 9A was an early component of an improved cycling infrastructure network built in New York over the past 15 years. Both planting and paving design create a safe, enjoyable cycling experience removed from the adjacent traffic.

While the Route 9A planting helped carve out a strongly identifiable path on Manhattan’s West Side, many streets are not wide enough to accommodate a similar approach. On Columbia Street in Brooklyn, planners identified the need for a bikeway as an important linkage between the transit-poor Red Hook neighborhood, the Columbia Street Waterfront District, and the rest of Brooklyn. But the roadbed was too narrow to include a bike path. Here, the design elevated cyclists, placing them on the wide sidewalk adjacent to the working waterfront. This simple gesture proved essential in providing a safe bike route by taking advantage of site resources, namely an underused sidewalk with room to formally accommodate bicycle traffic. 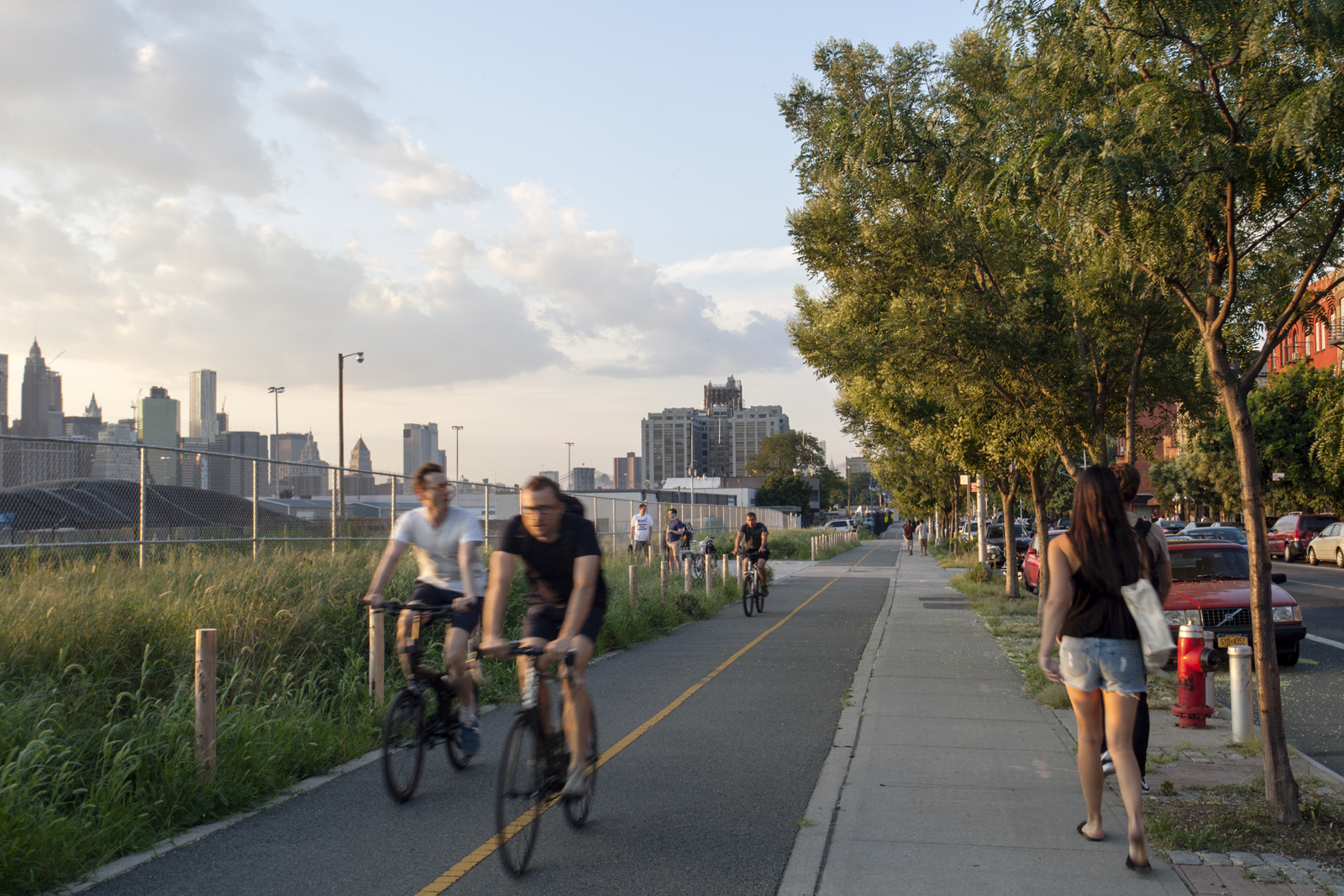 Much like Red Hook, the Bronx neighborhood of Hunts Point has limited public transportation options. Food Center Drive, part of a larger greenway master plan for the area, creates shared pedestrian and bicycle access between the residential community and Hunts Point Landing, as well as waterfront improvements proposed for the future.The path is also intended to encourage non-motorized commuting for some of the 16,000 employees at the adjacent Food Distribution Center. In this project, separation between motorized traffic and pedestrians and cyclists is critical because of the high tractor-trailer truck traffic. The greenway path is further buffered from traffic through a raised curb and planting. In order to prevent branch damage from trucks and to maximize clear sight lines, columnar tree species such as Quercus robur (English Oak) were planted to provide a narrow but clear division. 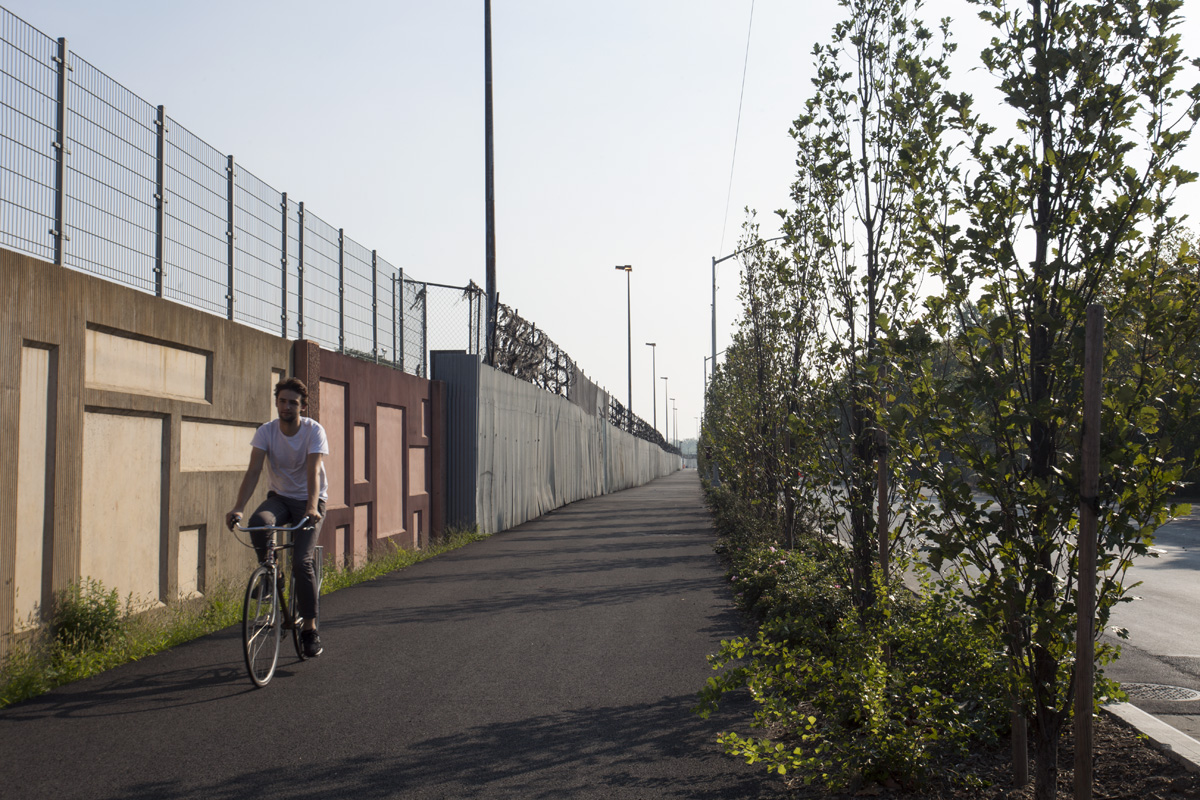 The Randall’s Island Connector, while short, provides a critical link between the Mott Haven neighborhood of the South Bronx and the sports facilities on the island. Here, the connector provides an important threshold, and the design emphasizes both visibility and security.

Our involvement in such diverse projects has underscored for us the importance of site-specific design strategies. And yet, we also acknowledge that as bike lanes become critical components of New York City’s complete streets, we must develop a common language of design to help city dwellers immediately recognize bikeways, for reasons of safety and identity. Iconography, materials, colors, planter and planting design all create a kit of parts from which designers can compose infrastructure that is identifiably linked to our city and its neighborhoods. Landscape architects play an important role in shaping the experience and aesthetic of bikeways and, as we learn from the city’s many new roadway redesign projects, we need to be active participants in the conversation about the place and character of bike lanes on our streets.

​Ilana Cohen is a landscape designer at Mathews Nielsen Landscape Architects in New York City. After receiving her MLA from Harvard University in 2010, Ilana worked in Paris on worldwide design and planning projects before returning to her hometown of New York.