How Algorithms Can Inform Office Design

WeWork’s Product Research team has been developing methods to employ machine learning to forecast how often meeting rooms are used.

WeWork Soho, London. A standard 6-person meeting room (C) is adjacent to the brainstorm room covered with whiteboards (D). A variety of meeting spaces is an essential part of the WeWork experience, but finding the right combination can be challenging. The research team is currently developing ways to ensure our spaces have the right mix of meeting spaces in our locations.

The following article originally appeared in WeWork’s blog as “Designing with Machine Learning.”

How many meeting rooms do you need in an office? It’s a simple question, but one that is very difficult to answer. Even experienced architects and designers struggle to allocate the correct number of meeting spaces, relying mainly on rules of thumb and intuition to overcome the lack of empirically verified guidance. It’s a scenario that is all too familiar. Buildings with too few meeting rooms make it impossible to reserve a room because they are constantly booked. Buildings with too many meeting rooms sit idle and take up space that could have been better allocated to another function.

Meeting rooms are a central component of the modern office. On any given day at WeWork you can find our members in meeting rooms, pitching potential clients, holding an interview, conducting a lunch and learn, or hashing out the details of their next big idea during a brainstorming session.

With so many important interactions happening every day, we take our role seriously in developing spaces that encourage our members to connect, learn, and grow. To that end, WeWork’s Product Research team has been developing methods to predict how often meeting rooms are used.This will allow us to replace the rules of thumb with accurate measures of how many spaces we need.

The story of our meeting rooms

In an earlier post, Daniel Davis described WeWork’s unique ability to improve our space by gathering and analyzing member feedback. In our latest round of research we applied a similar methodology to the allocation of meeting spaces.

Our approach is to analyze how frequently particular meeting rooms are booked by our members. Since we have the advantage of designing and managing our spaces, we have access to a lot of examples to study. In total, we gathered information from over 800 meeting rooms, and examined a variety of space types that included everything from a boardroom in London, a screening room in Los Angeles to a conversation room in Shanghai (a room with couches instead of desk chairs).

What we found was that each room tells a story. Some rooms are perpetual favorites — always booked and always highly rated by our members. Other rooms are underutilized with few members reserving and using them for meetings. We can take each of these rooms and begin to learn why members book a particular room, which helps us predict how often our rooms will be booked.

When we really dove into the data, some complicated relationships emerged.

To help us understand these relationships, the Product Research team employed machine learning to assist in forecasting how often meeting rooms would be used. You may have heard of the term machine learning. It’s a concept that has been around for decades, but with the recent rise of significant breakthroughs like self-driving cars and voice-activated assistants, machine learning has become a much talked about subject.

Even with this recent attention, it hasn’t made much of an impact on architectural design, and our application of machine learning in the evaluation of architectural layouts remains highly novel in the design industry. 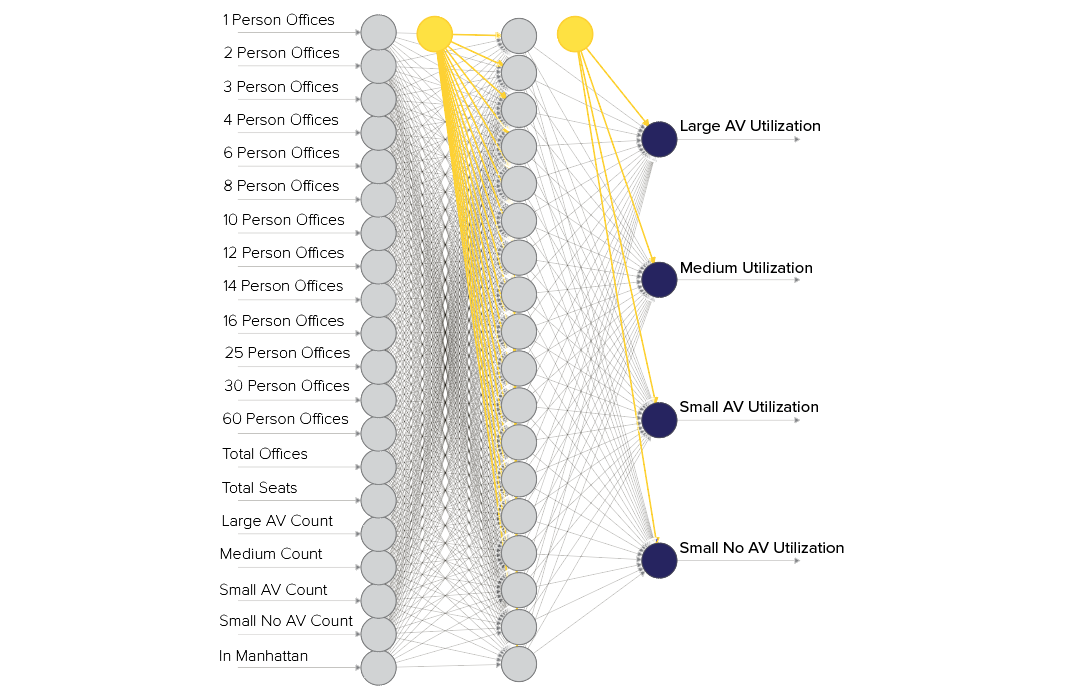 The neural network gathers data about a building’s layout ( left) and feeds this data through a series of artificial neurons that are trained to recognize differences in a building’s layout (middle). Based on other layouts the neurons have been exposed to, the network makes a prediction about the meeting rooms’ utilization (right).

Every time the network was fed a layout, it was also shown how frequently the rooms were used in recent months. Over time, as the network saw the layouts repeatedly, it began to learn the relationship between the layout and the usage. Eventually it understood this relationship well enough that it could fairly accurately predict how a layout would be used by our members before we began construction.

We put this approach to the test by providing the network with layouts that it had never seen before —ones that we kept hidden during the training. The outcome was surprisingly accurate! Based on our studies, we estimate that the neural network is 40% more accurate than human designers in predicting how frequently a meeting room will be used by the building’s occupants.

These graphs compare the actual number of hours a meeting room was occupied with the hours predicted by our designers (left), and by our neural network algorithm (right). The closer the dots are clustered to the diagonal line, the better. You can see that the neural network noticeably outperforms a human in predicting whether or not a meeting room will be used.

As we add more locations to our portfolio, open locations in new cultures, and test new layout strategies, our team will have more data to feed the neural network. This means our predictions of how people use meeting rooms should become more and more accurate.

The most powerful implication of this study is that before we begin construction, our teams can plan a space that fits the needs of the members that will one day occupy it.

Using machine learning to uncover patterns in the interactions between people and space is information that can make better design and programming decisions.

It is a process that can be expanded outside of conference rooms and beyond the design of an office. While nothing will replace the expertise of an architect, these powerful new metrics can help guide designers, fueling the efficiency of their creations in the modern age.

Nicole Phelan is a Design Researcher at WeWork.