In-Closure: A Park for Seattle That Any Citizen Can Claim

“The [in]-closure project goes far beyond a plain “public space”…it is the place where urban micro-events happen…conveying a social and interdependent economy based on time – a new type of commodity money to chat, debate, help ideas to germinate, be involved in community service, help, learn, play, relax, stroll, improve…” (ABF narrative)What is the nature […]

“The [in]-closure project goes far beyond a plain “public space”…it is the place where urban micro-events happen…conveying a social and interdependent economy based on time – a new type of commodity money to chat, debate, help ideas to germinate, be involved in community service, help, learn, play, relax, stroll, improve…” (ABF narrative)

What is the nature of public space in the coming century? How does that space function socially, economically, ecologically? Those are questions raised by the URBAN INTERVENTION ideas competition at Seattle Center, which recently completed its first phase. Three finalists were selected by a six person jury, with an additional seven commendations from a field of 107 international submissions. The finalists and all submissions can be seen here.

2012 is the 50th anniversary of Seattle World’s Fair, which created the iconic Space Needle and a 74-acre civic campus called Seattle Center. The Center – home to theaters, museums, a film festival, and multiple cultural festivals throughout the year – has been undergoing a revitalization, with an updated master plan and new tenant groups.  The city is also engaged in other significant public space development, notably a new waterfront master plan led by James Corner Field Operations.

To celebrate the Fair’s anniversary and generate ideas to inform Seattle’s significant investment in new and revitalized public spaces, the Seattle Center Foundation partnered with AIA Seattle to host an international design ideas competition, Urban Intervention. The competition addresses a nine-acre site in the center of the campus, currently home to the aging Memorial Stadium and bounded by the Gehry-designed Experience Music Project and the recently completed Bill and Melinda Gates Foundation. A mix of music, art, philanthropy, research, and industry now surrounds the site and drives / supports the regional economy, with leading-edge research in biotechnology and health and local companies including Amazon, Boeing, Starbucks, and Microsoft.

In this mix of high tech and high experience, grounded in the physical reality of Puget Sound and the Pacific Northwest, the Urban Intervention jury selected three competition finalists to address three major themes: (inclusive and engaged) social ecology, (focused and specific) site integration and (iconic and interactive) innovation. 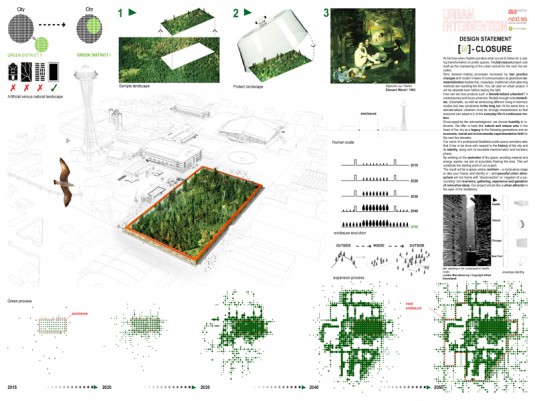 [In]-closure is a finalist proposal from the French team ABF, which suggests a walled enclosure around a carefully tended “wilderness” serving as a respite from the rest of the city. The enclosure is comprised of modular and portable kiosks, called event boxes, with a running track binding the whole structure on the upper surface. The event boxes are flexible and adaptable, with an exterior structure of stacked cedar planks and an interior surface of polished mirror. Diagrams show similar enclosure wall ideas for other cities as a kind of material typology: Detroit (tires), Chicago (bricks), New York (lights), and Seattle (stacked cedar). 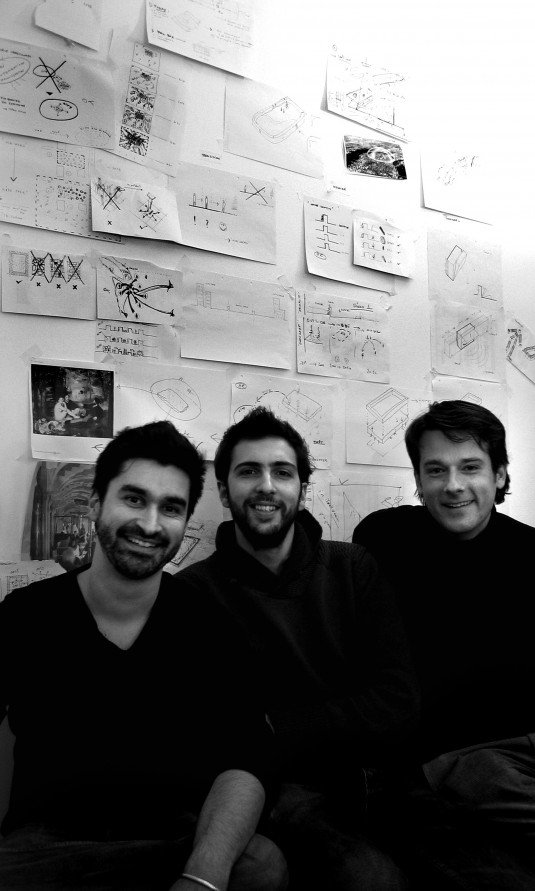 Citing the deliberative pace of Seattle process and an exponential rate of change, they write: ”How can we thus produce such a dematerialized urbanism? A contemporary and future urbanism, flexible enough to be immediate, distortable, as well as embracing different living-in-harmony modes and new constraints in the long run. At the same time, a dematerialized urbanism must be strongly characterized so that everyone can adapt to it, in this everyday life in continuous motion. Encouraged by the acknowledgment (of the brief), we choose humility to intervene. We offer to keep this natural and unique area in the heart of the city as a legacy to the following generations and an economic, social and environmental experimentation field for the next five decades.”

The proposal is a mix of bucolic landscape, with grazing sheep and horse trails combined with a time travel [in]-closure, an “outside-inside-outside” sequence standing as a spatial process…”to remind of a temporal dimension, past-present-future” (narrative). A “through the looking-glass” quality notwithstanding, the jury appears to be intrigued by the social ecology of this submission, as local groups can claim territory within the [in]-closure wall. Eventually, the proposal suggests that the wall modules be distributed or extended beyond the boundaries of Seattle Center as a form of cultural dispersal. 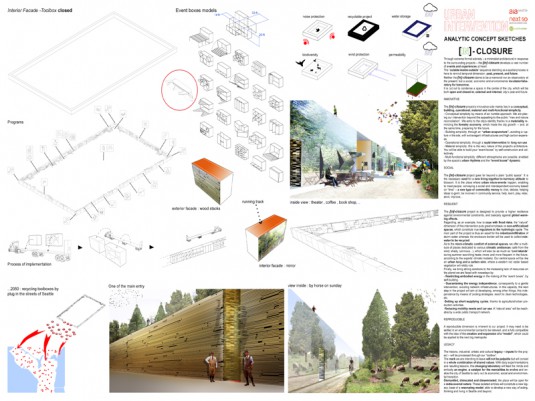 A published jury report comments on the scheme:

“In-Closure is remarkable for its ability to engage ownership at multiple levels – a new type of public market – but the design team is encouraged to think beyond a solid wall, and to reconsider giving over the interior space to a forest landscape. There are also concerns that the forest may form a hindrance to the interactions at the perimeter, visually blocking the rich and complex set of social opportunities suggested. The design team is encouraged to consider potential synergies and connections at all scales: between activities of the edge and activities of the central space.

“In-Closure has the potential to create a completely new form of interaction and ownership of the Center. Using the portable kiosks, local groups are invited to claim their territory within a partially walled park. When distributed beyond the Seattle Center campus, these same kiosks offer the possibility of expanding the boundaries of the Center and distributing its influence and reach.”

ABF’s notion of distributed kiosks mirrors a similar proposal by James Corner Field Operations for Seattle’s waterfront, a series of artist-in residence studio container kiosks would allow for the same type of cultural-economic interface in a heavily-visited waterfront promenade.

One can also imagine the system working in either direction, with groups in Seattle or the region building their kiosks per cedar plank and mirror specifications, then trailering | sailing | barging their studio into or through the city in a process not unlike the barging of the original “red barn” factory of Boeing to its current location.

Five themes are outlined in the competition brief: design to innovate, build an ecologically-resilient city, renew the cultural campus, generate dialogue and be a change agent. The idea of a bounded and regenerated landscape, of nourished urban ecology or social ecology growing within and then dispersing beyond the original precinct is a dynamic attitude to an unknowable future. The team’s diagram for 2050 shows an expanded [in]-closure at the full boundary of Seattle Center, but one can easily imagine that porous edge extended and integrated more deeply into the urban fabric, woven into the broader social / economic / ecological streams of that city of tomorrow.

Cameron Hall, an architect and principal at STAVE, is a member of the URBAN INTERVENTION scoping and advisory committee. @stavestudio