In her monthly “Letter from Baltimore,” Elizabeth Evitts Dickinson writes about architecture, culture, and urbanism in a city more often associated with violent crime than with good design. Click here to read her previous posts. For more by Dickinson, visit her blog, Urban Palimpsest.The ripple effect of the stalled housing market has impacted countless industries—including […]

The ripple effect of the stalled housing market has impacted countless industries—including the purveyors of those storage pods that pop up on the curb when someone needs to move. A few months back, Charley MacKenzie, the owner of the Maryland-based SmartBox USA, told his friend Gregory Pitts about his company’s overstock of plywood storage boxes, each about the size of a walk-in closet. Pitts, a designer with the furniture company David Edward, had an idea. What if the pods could themselves become home?

MacKenzie has since donated 2,000 pods to what has become known as the H-Box Project. A design team composed of faculty and students from Pitts’s alma matter, the Maryland Institute College of Art (MICA), along with a faculty member from Morgan State University, is now brainstorming ideas for turning the pods into temporary shelters for those displaced by the earthquake in Haiti. Fabricated from a surprisingly strong frame, the storage boxes include a hinged door and are ready to be loaded by pallet onto trucks and ships. The thought is that the boxes could be retrofitted for things like housing and community space, and—since they are storage units, after all—that they could be shipped filled with supplies already earmarked for Haiti.

The designers, led by the MICA adjunct faculty member and local architect Kuo Pao Lian, are now considering ways to vent, weatherproof, combine, and outfit the boxes for the Haitian terrain and people, many of whom are currently living in ad hoc tent cities. The team’s environmental design project manager, Amira Rasayon, has sketched multiple solutions for the pods, while its graphic design manager, James Holly, has created collateral to help raise funds. 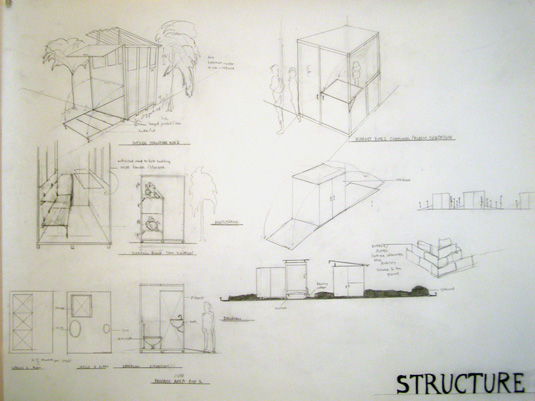 Sketches of some potential uses for the storage pods (click to view a larger version). All images: T. Amira Rasayon

Lian says the next step is to coordinate with someone on the ground in Haiti. Although the students and designers have done extensive research from Baltimore, they have not yet been able to visit the country—which they recognize is a problem. “We don’t want to say, ‘This is what we think is needed’ and impose a design solution where we have no direct knowledge,” Lian says. “We need to have a partner that has a relationship with Haiti and we don’t want to move forward without having that person on board.”

As the H-Box team actively seeks such a partner, they also continue to tweak designs and seek feedback. Two boxes sit on the loading dock of the David Edward warehouse, ready to be turned into prototypes. If those pass muster through local testing (like potentially having volunteers sleep in them), they would then go on to Haiti. “If we get a good response [from Haiti], then we will start to plan and strategize for all 2,000 boxes,” Lian says. 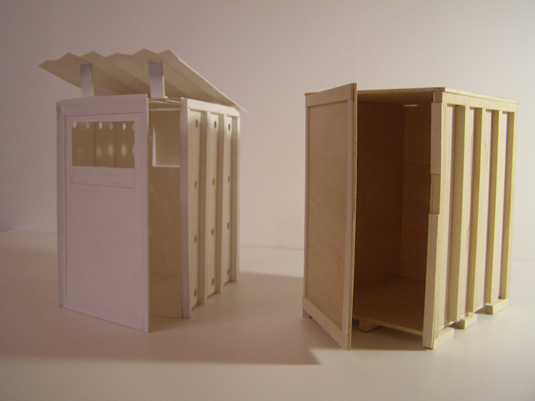 The team is not deaf to the increasingly heated debates over “outside” designers offering solutions in places they do not inhabit (see the comments generated from Metropolis editor-in-chief Susan Szenasy’s recent blog post on humanitarian design). Lian is clear: this is not design imperialism. “If five people from Haiti tell me this project is not a good project, I would stop the project,” he says. “I would ask, ‘OK, where do we gear our efforts instead?’”

He is also clear that they are not in this for accolades or awards, but for input and strategic advice on how to make the project truly work. “More feedback is better; it makes the project better,” Lian says. “I’d rather have a production team of lots of people putting in their ideas rather than one person saying it’s their idea. Let’s all get on the same team and see if we can do something worthwhile.”

To see more H-Box designs and sketches (and to offer your own constructive feedback), visit the project’s Flickr page.
T.Amira Rasayon