Marissa Mayer Is Right: We’re Not Meant to Work From Home

The controversy has our columnist thinking of his first home office. 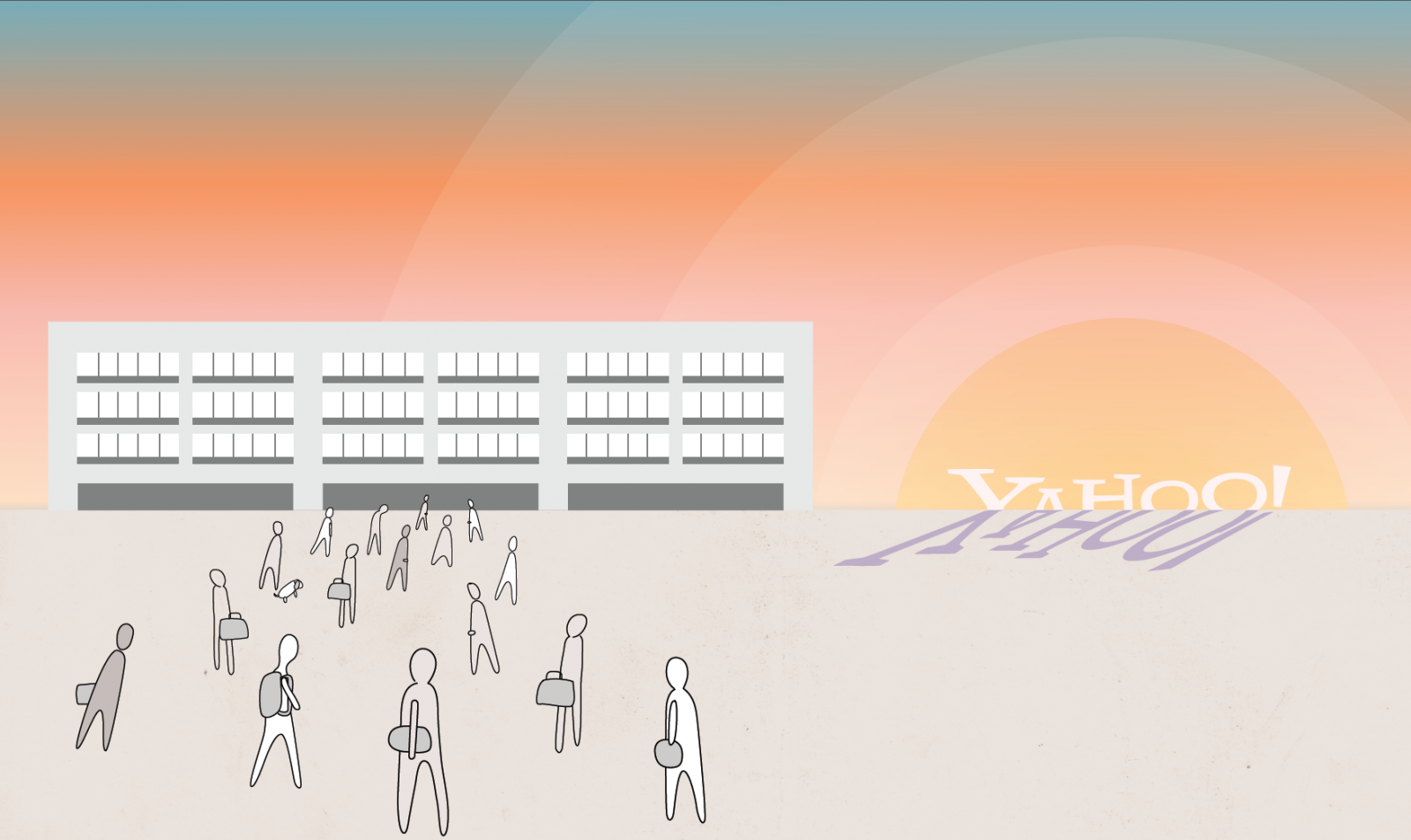 Illustration by Once & Future

Where was Marissa Mayer in the 1980s—when I needed her—as I chased down grim news stories in the Middle East? Years before the first Web page, I suppose she was teething on a concrete baby biscuit and envisioning the colorful mobile above her crib in Wausau, Wisconsin, as a dazzling interactive space for delivering content. Actually, Mayer is a bit older than that. She was around 12, no doubt unfamiliar with the term “telecommuting” when I lived in a studio apartment in Jerusalem with a Reuters wire machine set up next to the living room couch, filling the already dingy space with green cathode-ray-tube light. This eerie screen announced the latest news with Courier font, all caps, and a primitive beep that did not distinguish among a bombing in Jerusalem, a tornado warning in East Lansing, and a goal by Real Madrid. There was plenty of frenzied urgency over cricket results as well. It got so I understood the daily rhythms of the Reuters news cycle well enough to be able to screen out all the trivial beeps and know when I probably needed to pay attention.

I was at home. My job was at home. As a bureau chief for NPR in Jerusalem in the late 1980s, that apartment was one of the first experiences I ever had creating a home office. A Hewlett Packard HP 110 laptop with a tiny screen sat next to the Reuters machine. On a desk in the kitchen was a desktop computer with a noisy printer. Next to that were shelves of reference books and briefing papers and notebooks from interviews and news conferences. A copper wire landline phone tethered me to Washington, D.C., and was my sole conduit for filing audio reports. My efforts at telecommuting had merged job and life so completely that no aspect of being at home could escape the watchful wire machine, which spit out headlines and forced me to consider changing plans a few minutes after every suspicious beep. Home life had become my job. I was a slave to the Reuters machine during some very busy years in the Middle East. Those were exciting times, but if I think back to that workspace I can clearly recall that, every day, above all else, I yearned for some real, human contact.

In those days the lavish separate offices were for the wire services, the big papers, and especially the New York Times, whose offices in Jerusalem were like a fortress compared to nearly everyone else except the television networks, which had studios to maintain and trucks of equipment to store. A sure sign of journalistic indigence in Jerusalem, in 1988, was not having a separate office and being compelled to live where you worked.

Yet for most people working ordinary jobs back in the U.S. a home office in 1988 seemed like a serious luxury. That’s certainly how my editors at NPR regarded it. It was the nature of the job and the constant, intense news that made it wearing. If anything, having an office at home­—even my cramped-as-could-be space—was seen as an advantage. Over time this proved itself to be a flawed and narrow criterion for evaluating a workspace. I would get hints of it when I visited my colleagues in their humble and even shared offices in the big, old concrete press building in downtown Jerusalem, Beit Agron. It was wonderful to interact and share stories, catch up on what was going on, hear the gossip, live a real life in this often unreal place. I would linger there longer than necessary, sometimes making the rush back home to file a story more harrowing than it needed to be. Hanging out delivered information (more so than a wire machine), resulting in new story ideas and less stress. Often the hot topic around those offices was whether the New York Times correspondent had been seen out of the Times’ compound that day and why.

I overlapped briefly in Israel with the legendary New York Times correspondent Tom Friedman. You may remember that he was based there back before the world became flat, back when the color green referred more to Islam than climate change, and the word “Lexus” never appeared in the same sentence as “olive” or “tree.” Back when Friedman spent his time mostly thinking about the past and present in the Middle East, before he moved on to invent the future for the rest of us, he had the reputation of rarely leaving the office. It wasn’t just Friedman. New York Times correspondents in Israel or anywhere else in the Middle East were like cabinet ministers. Important people saw them in their offices, not the other way around. While Friedman won two Pulitzers for covering the gritty streets of Beirut and Jerusalem in the late 1980s, he did not need to run with the journalist crowd; the Times offices were a place unto themselves.

Today Friedman writes about iPad communities that only interact online and how the jobs of the future will be about personal aspirations. “Just showing up will not cut it,” he wrote in a column this spring. This made me wonder whether Friedman ever goes into the huge offices of the New York Times on the west side of Manhattan. Why would he have to? Sometimes his columns feel a little bit like dispatches from the bubble of his own ample mind and might benefit from some actual human interaction.

Today Marissa Mayer is all grown up and running Yahoo!, where she is lighting up the online residents of Friedman’s flat earth, who are annoyed at her dismissal of the value of telecommuting. The company memo to employees from the head of HR, leaked to Kara Swisher of the Wall Street Journal, said: “Speed and quality are often sacrificed when we work from home. We need to be one Yahoo!, and that starts with physically being together.”

Whatever might be said in hindsight about CEO bad timing and wrong messaging, when I read about this push-back on the supposedly utopian freedom to telecommute I found myself in agreement with Mayer. There had to be some intrinsic productive value to collective, face-to-face contact, or we would all still be hunter-gatherers. A two-decade-long parade of workplace innovations capped by the explosive growth of “Friedmanic” connectivity in just the past few years seems to have revealed a basic tension in corporate life: The health of any institution depends on how it achieves a balance between personal fulfillment and the accomplishment of collective goals.

“The NBC series The Office may be canceled,” said Steelcase CEO Jim Hackett to me in a recent email, “but not the real office.” His email told me it was “iPad generated,” but his outlook was what you might expect from a company with a fairly entrenched financial interest in the concept of people showing up to work. Hackett told me he and his colleagues were quite intrigued by the implications of the Great Marissa Mayer Telecommuting Crisis of 2013. Mobility, he believes, has clarified a lot of workplace issues that have been clouded for years by the anxiety that comes with rapid change.  “What we’re finding is that as mobility is fully enjoyed by workers, it means that the nature of why spaces exist become a more intense statement of how those spaces engage and augment performance.” Hackett seems to view all of this more like a Soren Kierkegaard than a Thomas Friedman. The tension between absolute mobility and fixed spaces is something the religions of the world have been dealing with since before Samsung Galaxies, Wi-Fi, or even Gutenberg. “All of them employ the concept of prayer,” Hackett says, referring to the great religions. “Let’s label this as a mobile or wireless aspect of religion. Yet masses of people still choose to gather in churches, synagogues, and temples, etc. Why, we might ask, if they can pray from anywhere?” Then Hackett really goes for it on the Kierkegaard scale as he concludes: “The answer lies in the desire for humans to be together and the good that comes from this.”

I don’t know if these two CEOs, Hackett and Mayer, would ever put on robes, light incense, and conduct an off-site seminar on the Zen of making it into the office. But with my own memories of self-discovery in Jerusalem long ago, this current conversation suddenly feels like a real Kumbaya office moment. Maybe it will get Tom Friedman to show up at the New York Times HQ on Eighth Avenue, if only for a hug.