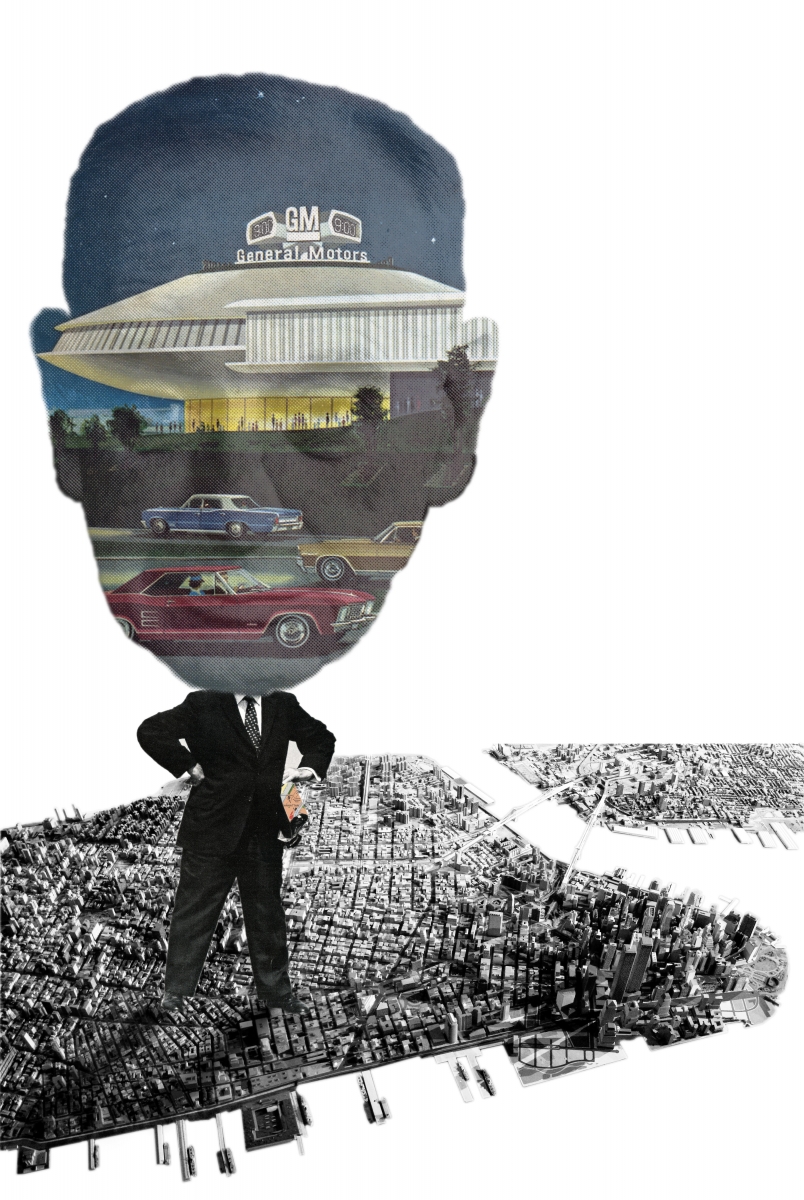 It is a curiosity of modern urban life that the more cars crowd into cities, the more they become invisible. It’s a great feature that comes standard on any model these days. Unfortunately we can’t control it from the driver’s seat—however much we would like to wave our hands and watch through our windshields as gridlocked cars disappear, liberating us from traffic imprisonment. The invisibility I am speaking about only works if you’re a pedestrian or bicyclist. The number of motorized vehicles parked or driving at any given moment on the streets of New York City is astounding. An estimated 2.1 million are registered in the city, according to the state’s Department of Motor Vehicles. Yet we never fully register them visually when we’re walking on the streets. The city is the negative space and that is how our eyes increasingly navigate urban landscapes. Everything around the cars and trucks gets knitted together by the eye and, even though the vehicles are present, we have gradually learned to ignore them unless we’re standing in the direct line of moving traffic.

Even then, people will regularly walk across streets into the traffic streams in a manner not explainable as stupidity, blindness, or outlaw behavior. This happens on the West Side Highway in Manhattan all the time. It’s not just the cars that have become chimera; the roadways themselves are asphalt apparitions as people hurry across the pavement with their eyes on the newly developed Hudson River Park and its networks of grassy walkways and bike paths. It is as though there are two separate and mostly non-intersecting domains: the city of vehicles and everything else. The pedestrian city has its famous tourist attractions like Macy’s, the museums, and the new 9/11 Ground Zero sanctuary. So does the city of vehicles. They are the moving open-topped double-decker buses inexplicably filled with people perfectly happy to sit in the rain, heat, or snow observing a 3-D super-slow-motion streetscape with a really bad soundtrack. Some people can also be seen shooting a 2-D video of their bus ride, although it’s hard to imagine the audience for a documentary featuring all the exciting places they didn’t stop and visit. In general, vehicles and civilians coexist to a remarkable degree, but intersections between these two worlds can be fatal and it is an important mission of urban design to figure out how to develop signals and signage to keep pedestrians and vehicles apart.

This tale of two cities occupying the same space is seen best from a bicycle. As the winter this year was particularly long and grim, my first few long bike rides revealed a resurgent street culture emerging in every place for walking and riding. There are people everywhere outside, using spaces that would have been graffiti-covered concrete emptiness just a few years ago. The proliferation of food trucks, outside café seating, pop-up clubs, and art spaces in buildings right on the edge of freeway structures depict a population ignoring the automobile city, not being defeated by it. A journey from the Verrazano-Narrows Bridge north along the Brooklyn-Queens Expressway (BQE), through Williamsburg, Greenpoint, and across the Kosciuszko Bridge into Queens is alive with new residential buildings and rehabs. There is a lively stoop and café culture thriving adjacent to the dystopian-looking BQE, as though the ghosts of the neighborhoods that were once here have found a way back from the oblivion of the late Robert Moses to repudiate the large footprints of his ever-present ghost.

It has proved vastly more expensive to bulldoze Moses’s monuments than it was to build them.

Much invective has been published and directed against Moses, the master builder, transportation visionary, politician, and urban chain-saw artist. (More recently, however, revisionists have reconsidered Moses’s legacy.) Opposing the man’s work gave an ideology to Lewis Mumford and a cause to activist Jane Jacobs. The Moses and Jacobs story may even become a biblical-sounding opera someday. The argument during Moses’s life and the consensus since his death in 1981 has been that he sacrificed the neighborhoods for his concept of arteries surging with cars and trucks. This twentieth-century blueprint of the modern city became the fertilizer for gridlock, not its antidote.

Moses’s vision takes you closer to the sprawl and congestion of Lagos or Cairo than it does to the kinds of orderly future-world dream cities of the 1964 World’s Fair in Queens. His vision of the future city that built the concrete and asphalt canals for steel and wheels —which was the fate of virtually all urban areas in the United States—can be seen in my 50-year-old handbook: monorails and parkways to replace subways; globally connected personal “Studyspheres” to replace schools and libraries, with cars as the agents of liberation. The legacy of Moses is a public-transit system that languished, and bulldozed ghettos cleared to make way for mob-scene park destinations. Even the rusted-out World’s Fair site has become a visual joke in the movies Men in Black and Iron Man. Readers of this magazine well understand the rest.

But quietly the people of the city have perfected a form of urban renewal that is part interior renovation, sidewalk reclamation, and enlightened denial.

Nearly two generations of political initiatives have largely failed to undo what Moses did (it has proved vastly more expensive to bulldoze Moses’s monuments than it was to build them), but quietly the people of the city have perfected a form of urban renewal that is part interior renovation, sidewalk reclamation, and enlightened denial. With their eyes averted, people have found a Moses workaround. The South Bronx (impaled by Moses’s Cross Bronx Expressway) or Red Hook in Brooklyn (sawed off by the Gowanus Expressway and the polluted canal of the same name), have acquired hipster enclaves, vacant lot gardens, and local craft businesses that have found a way to mix with the residents of once utterly blighted housing projects, to the benefit of both. It can be seen in the successful development of Dumbo and Brooklyn Bridge Park that have sprouted in the shadow of the BQE, where kids ride a renovated carousel under roadways that no one pays any attention to anymore. What’s even more amazing about Brooklyn Bridge Park is how the noise of the constant traffic is ignored as much as the double-decked roadway. The most remarkable design feature in the park, in fact, is a huge earthen berm that will shield part of the park from the sound of the traffic on the BQE. When that section opens later this year, the silence will clearly be deafening and will be a sign of how the ears of New Yorkers have filtered out the “vehicle city” as much as their eyes have.

People don’t notice the cars and highways today because they are not the city. They never have been. When the snow finally melted this spring, Moses’s pockmarked and plow-savaged roads and bridges looked worse than ever. The people of these new enclaves emerged with their sunglasses and bikes, and pulled up some tables and chairs to enjoy the city and watch the master builder’s legacy continue to slowly melt away along with the blackened late-winter slush piles. New York is hardly a utopia these days, but the spaces around the cars and pavement have become destinations, homesteads, and neighborhoods. Today the roadways and bridges of New York’s vehicle city are occasionally useful places to visit, but nobody would ever want to live there anymore.