While it has brought with it a fair share of good buildings, New York’s architectural renaissance has presided over a general dissolution of urban mix.

When our family first got television, the program we most faithfully watched together was The Phil Silvers Show, starring the immortal vaudevillian, the legendary “King of Chutzpah,” as Sgt. Ernie Bilko. The series ran from 1955 to 1959 and was set on an imaginary army base in Kansas, where Bilko ran the motor pool, presiding over a motley crew of characters who engaged in antic, if penny-ante, schemes of advantage and insubordination. Our favorite member of the platoon was the hapless Private Doberman, a lovable, remarkably homely schlemiel, played by Maurice Gosfield. In one sublime episode it was announced that Doberman would receive a visit from his sister, and Bilko—somehow persuaded by the mantra “the uglier the brother, the more beautiful the sister”— prepared for a rendezvous with carnal destiny. She turned out to be Doberman’s identical twin.

Needless to say, the “sister” is Gosfield in wig, dress, and heels. It’s an image that—in one form or another— constantly returns to me when looking at New York City’s recent architecture. The “renaissance” that has brought us our current boom in starchitect building reflects a refinement in the global real estate market in which status is attached to this giant inflection of the “name” brand. While architecture has always been an aspirational object of consumption, the winds of fashion have truly reached gale force of late with the creation of an international market for replicant luxury goods, whose broad track embodies the homogenizing logic of planetary neoliberalism. Here, the emblematic emporium is the airport duty-free shop, its shelves groaning with product that is at once pricey and commonplace: Dior, Gucci, Prada, Glenfiddich, Cohiba, Burberry, Godiva, etc. In the architectural world, an upper-crust mobility formerly the province of interior decorators has spread to a cohort of jet-setting architects. (By comparison, practitioners of the past century whose deluxe brands continue to sell in New York—McKim, Mead and White; Rosario Candela; or Emery Roth—were fundamentally local or national firms, and their currency was not so easily convertible.)

The sheer visibility of this transformation is astonishing and now dominates much of Manhattan. The view of Chambers Street from our bedroom window in groovy Tribeca encompasses an exemplary devolutionary prospect. From right to left I see the apartment building where the late critic Herb Muschamp and my friends Satya, Vyjayanthi, and Sundar used to live: the 52-story Tribeca Tower at 105 Duane Street, built in 1988 to designs by the prolific SLCE (the erstwhile Schuman, Lichtenstein, Claman, and Efron, the journeymen behind a multitude of starchitect construction documents as well as their own galaxy of anodyne blandness). Although extruded straight up, 105 Duane is articulated in plan to produce some ins and outs— including bay windows—to variegate views, and to give a little extra shape to the smallish, cookie-cutter rooms within. Next door is John Carl Warnecke’s 1974 windowless pink granite monolith for phone company switches, allegedly built strong enough to keep pre-cellular land and sea lines open should an H-bomb fall in the neighborhood. Shaped in a largely vain attempt to make itself less loomy, the structure tests the envelope of the “sculptural” in architecture, probing the meaning of form that is virtually bare of any content save raw enclosure. It does provide neck-craning befuddlement to many out-of-town visitors who can’t comprehend what it can possibly be and an abashed admiration for its maniacal indifference.

Our urbanism, for better or worse, is exactly one of negotiation, the architecture of the deal, and the deal is always between public and private interests.

Next over is Herzog & de Meuron’s just-finishing tower at 56 Leonard Street, a formal and conceptual hybrid of its two predecessors. Admittedly a pretty winning object from many angles and robustly now, it still feels like a period piece, stylistically very much of the era that produced the Tribeca and “tel” towers, sharing exposed slabs and infill with the one and formal push-pull moves with the other. Certainly, the conceit of stacked boxes is very sixties (think Rudolph, think Safdie), and whenever I look at it I feel myself carried back to the precomputer studio of my own architectural education in the day. Equipped only with Mayline and Rapidograph and influenced by the relative ease and “objectivity” (all dimensions to scale) of the style of projection, I did many a project in axonometric drawings, and 56 Leonard looks for all the world like it was designed that way too. This reciprocating relationship between form and representation (currently embedded in palaver about the deeper meanings of “parametric” design) will recur until architecture— via its increasing preoccupation with appearances and branding—finally arrives at a state of total virtuality. 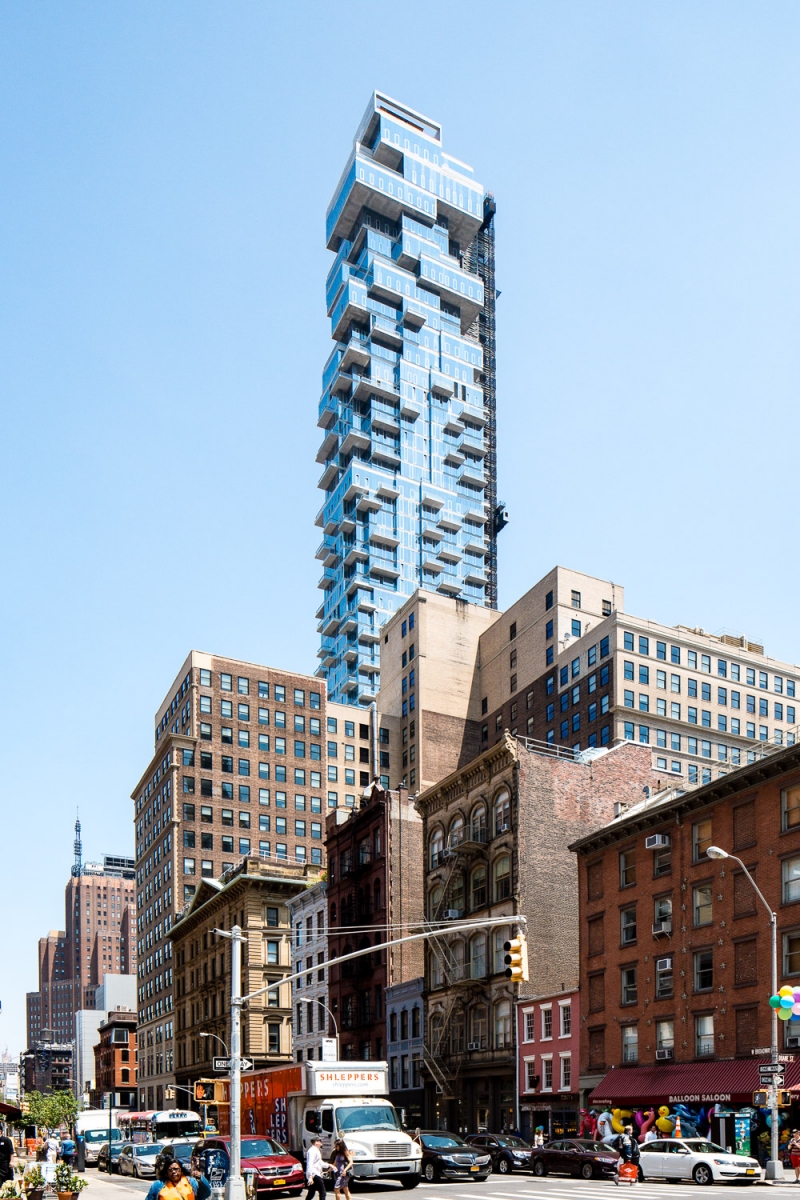 These three Dobermans—built over a span of 40-plus years—almost completely describe our current architectural repertoire and suggest the essential irrelevance of trying to unpack its meaning using purely visual standards. From my perspective (supine, in bed), the treble towers all have exactly the same effect: subtracting sky from the view. While the Leonard Street shaft might look great somewhere else, it lacks fundamental  urbanity, a sense of cooperation and comprehension, of situation. Like the blight of supertall towers in midtown, it’s all about seizing views both from within and from a distance, the narcissism of privilege, look at me looking at you. On the street, its effect is clear in the bien pensant downtowner’s lament: gentrification. While many deride this as the mating call of the limousine liberal, the process on the ground is the primary site of the criticism’s value. American liberalism understands the good society—and the good city—as a place of mix, where opportunity is not simply aspirational but everyday. These buildings reduce mix to a single class (business class!) of both subjects and objects, eliminating its most vital dimension: the social.

Chambers Street is itself a fine register of this kind of winnowing. Bisecting the island from the Municipal Building to the Hudson, it crosses virtually every subway line in the city, and the stations along its length disgorge the daily throngs of commuters who work in our civil service, a model employer offering opportunity to an authentically diverse population. It’s contested territory, and the gyre of rising rents victimizes predictably but not a little inscrutably. Is there really so much custom for mani-pedi that the street can support a salon per block and many more on streets nearby? And that big new “European” waxing parlor— who goes there? I get the high-end restaurants and the high-volume fast-food places down by the community college. Certainly the persistence of those holes in the wall that couldn’t support a use beyond the sale of gum and lotto tickets makes sense. But in the more mysterious ebb and flow of discount stores, sports bars, dentists’ offices, and military recruiters, the street offers a fine archaeology of our cultural economy and its fine-tuned sensitivity to the circuit of capital. Gone are the hot dog stand and the bodega and the hardware store. Welcome the oligarch-funded condos and 10,000 Miele appliances!

These buildings reduce mix to a single class (business class!) of both subjects and objects, eliminating its most vital dimension: the social.

If the aggressive stylishness of the one percent is the most visible manifestation of the tectonics of the income gap, the most important effort to bridge it is the attempt—first in the Bloomberg administration and now more ardently in de Blasio’s—to promote housing affordability via the medium of “inclusionary” zoning. The strategy is at once heroic and depressing. Heroic because it is an honest effort to protect and house a population at risk of being completely priced out, citizens who have every right to share the city and on whom its working depends. Depressing because even if the effort succeeds to the max, there will be a net loss of affordability as the market devours opportunities at a far faster pace than losses can be made up. And still more depressing because of the Peter/Paul deal-making that pervades the mentality of so-called public-private partnerships, as if that principle weren’t the fundamental basis for our democracy.

It’s a very Republican mind-set, the idea that every endeavor, whatever its value beyond the bottom line, must be subject to an extremely localized test of its ability to, in effect, self-finance. The results range from the construction of condos in the middle of the new Brooklyn Bridge Park to the weird—and resisted—hybridities that are bringing “market-rate” housing to the surplus terrain of our Housing Authority projects and to struggling neighborhoods where there remain questions about both the profitability of such building and, conversely, about whether the price increases it might bring will do more harm than good to the existing supply of affordable housing nearby. It’s also the motivating idea behind the legion of business improvement districts and conservancies (classic cases include the Central Park Conservancy and the Grand Central BID), self-taxing schemes for “public” improvements that disproportionately favor rich neighborhoods.

New York’s architecture has long been founded in a dialectic of form and formula. Gaming the system—whether via the kinds of subsidies and tax benefits that have so benefited the Family Trump and other developers or in the morphologies that emerge from canny manipulation of the arcana of the zoning code—continues to produce works of both genius and horror. Our urbanism, for better or worse, is exactly one of negotiation, the architecture of the deal, and the deal is always between public and private interests. While this is right and proper, the question is always who holds the strongest cards. The deck continues to be stacked against the public, and the sum is never zero.