A sensitive upgrade to a beloved getaway in Oregon takes its cues from the natural landscape that surrounds it. 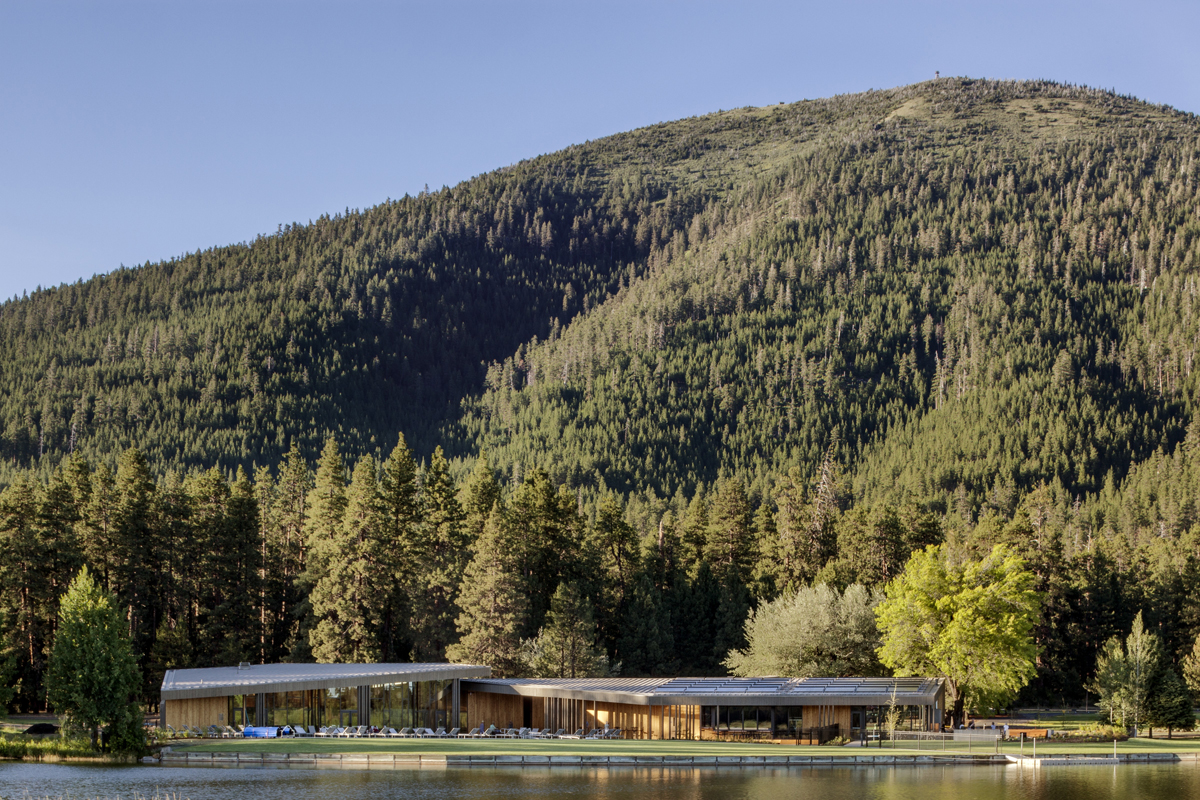 Since it was first built in 1972, Black Butte Ranch has become a popular vacation spot for those who love the seclusion of the outdoors.

Black Butte Ranch, a much-loved hideaway tucked into the Willamette National Forest, is one of Oregon’s treasures. The ranch triangulates between Portland and the city of Eugene, providing a popular recreational getaway to a big constituency. Though the natural landscape is nothing short of sublime—the site offers sweeping views of Mount Washington, the Three Sisters, and other surrounding peaks—its architecture has been equally integral to its popularity. Back in the early 1970s, for example, a grouping of Modernist ranch houses picked up awards from the American Institute of Architects and landed in the pages of magazines as exemplars of regional design.

So when the ranch sought to update its facilities, it turned to Portland-based firm Hacker to create buildings that would not only provide the necessary contemporary amenities but also carry on the legacy of architectural excellence at Black Butte. Hacker designed two separate structures that collectively house a restaurant with indoor and outdoor seating, an outdoor pool, locker rooms, a fitness center, and an activity room for kids. The architects conceived the larger of the two as a set of interconnected volumes, the angle between them helping to provide an edge for the outdoor pool. Together with the smaller volume—a recreation barn—the buildings help to highlight a walkway and a meadow, on the side opposite the pool. But the architects also had the site’s larger context in mind. In a nod to the ranch’s distant surroundings, they sculpted the openings and breezeways between the buildings as frames for particular natural features like Mount Washington.

For Hacker principal Corey Martin, who led the design effort and who had grown up in the region, it was paramount that the project come off as secondary to the landscape. As such, he designed the buildings as low-slung pavilions with canted roofs, giving them the appearance of being dug into the earth. Rooflines extend into generous overhangs and trellises, emphasizing the design’s horizontality and providing generous amounts of shaded outdoor space. Trellises cast striated shadows along the cedar facade, and an overhang serves as a canopy over the pool deck.

The buildings are covered in dark-stained cedar channel siding. “The outer skin of the building is a darker material so that it blends into the background,” explains Martin. Inside, the architects wanted to create well-lit, open spaces, which, like the exterior, would speak to the surrounding context. To maintain material consistency, they clad the interiors in cedar, too, but, unlike on the exterior, they used a clear stain, lending a brightness to the space. Skylights let in natural light, hitting the walls along the wood grain and highlighting the cedar’s knottiness. Concrete retaining walls throughout the grounds were made with board forms, reinforcing the material palette, and referring again to the inherent beauty of wood grain. “The materials are relatively modest,” Martin concedes. “But they make a big impact.”

Hacker designed the forms in response not only to the natural landscape but also to the site’s earlier architecture. “Those original buildings were very light on the ground,” Martin explains, citing Black Butte’s heritage ranch houses. “Our project took a different approach, since our buildings weigh heavily on the ground.

“The architecture here was a larger story about Pacific Northwest Modernism,” he continues, noting the region’s legacy of creating buildings that are self-confident interpretations of Modernism, but also subordinate themselves to the natural environment. “For this project, we decided to evolve the language of that story—it’s an evolution, but not completely distinct.” 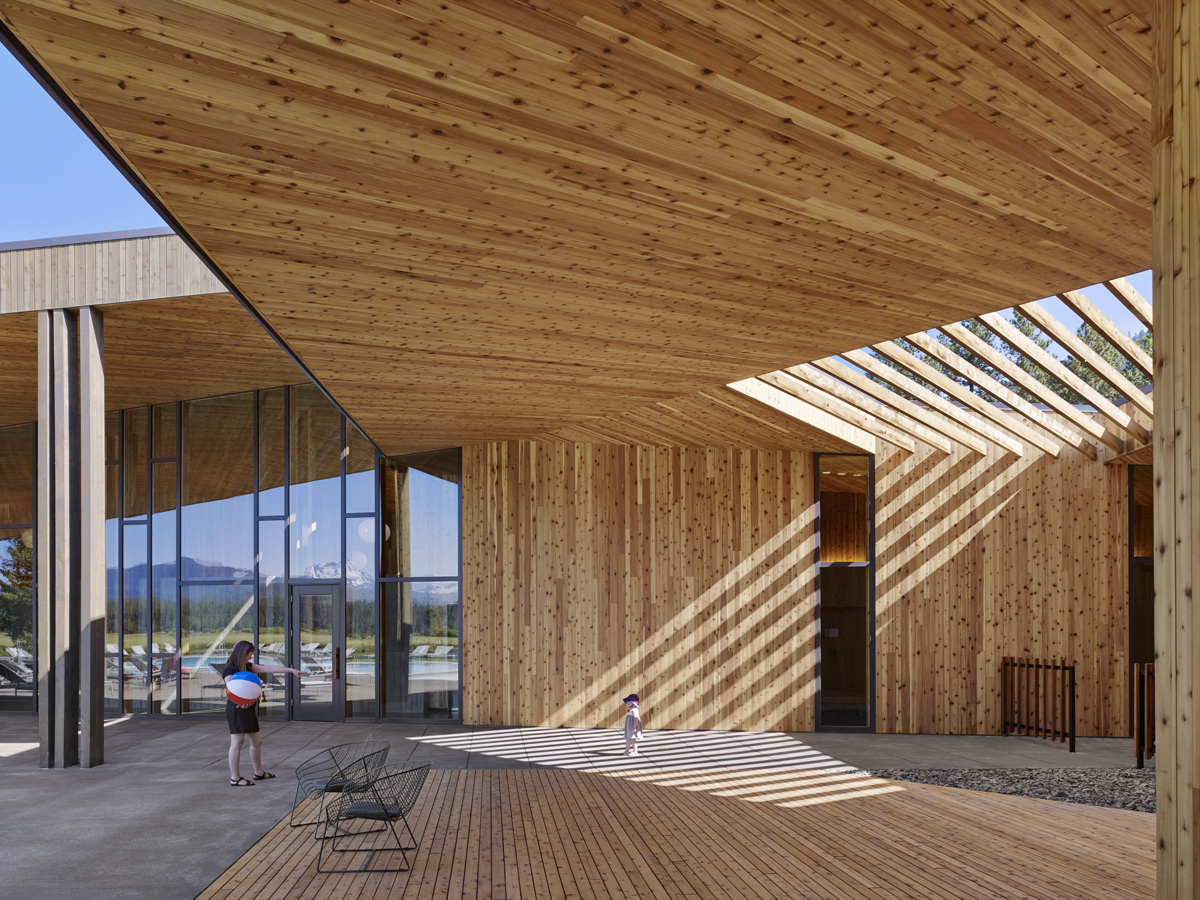 The ranch complex comprises two separate structures that collectively house a restaurant with indoor and outdoor seating, an outdoor pool, locker rooms, a fitness center, and an activity room for kids. 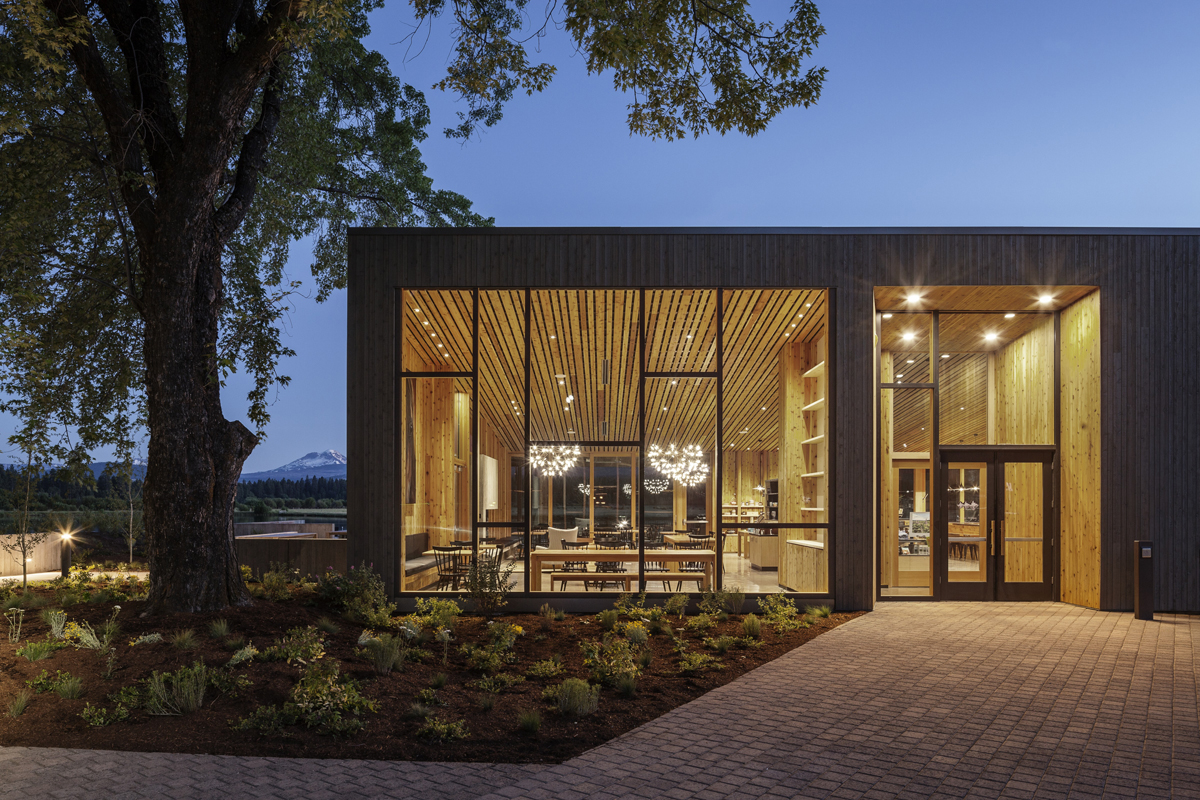 Expansive windows in the bistro (below) mean that nature is rarely out of sight. Its beautiful wood ceilings are crafted from tight-knot cedar. 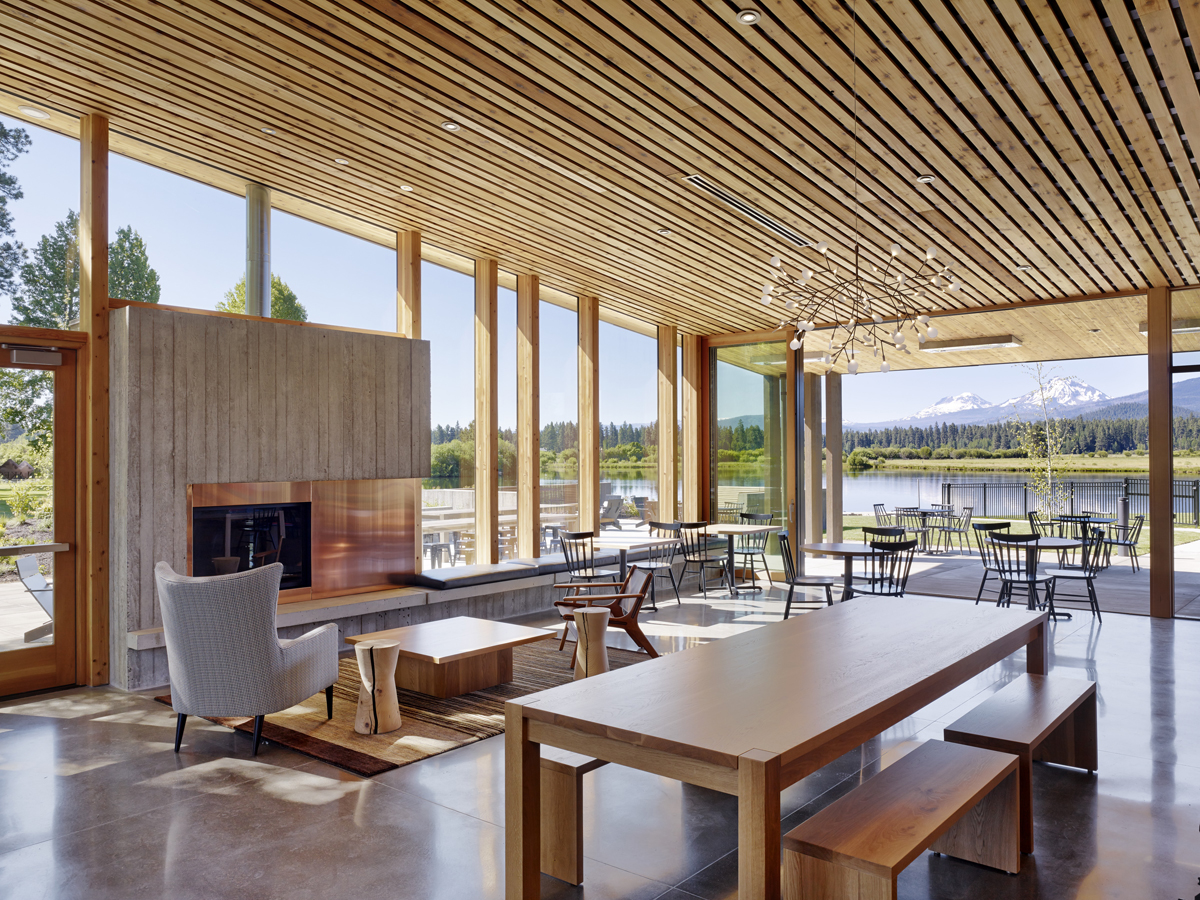 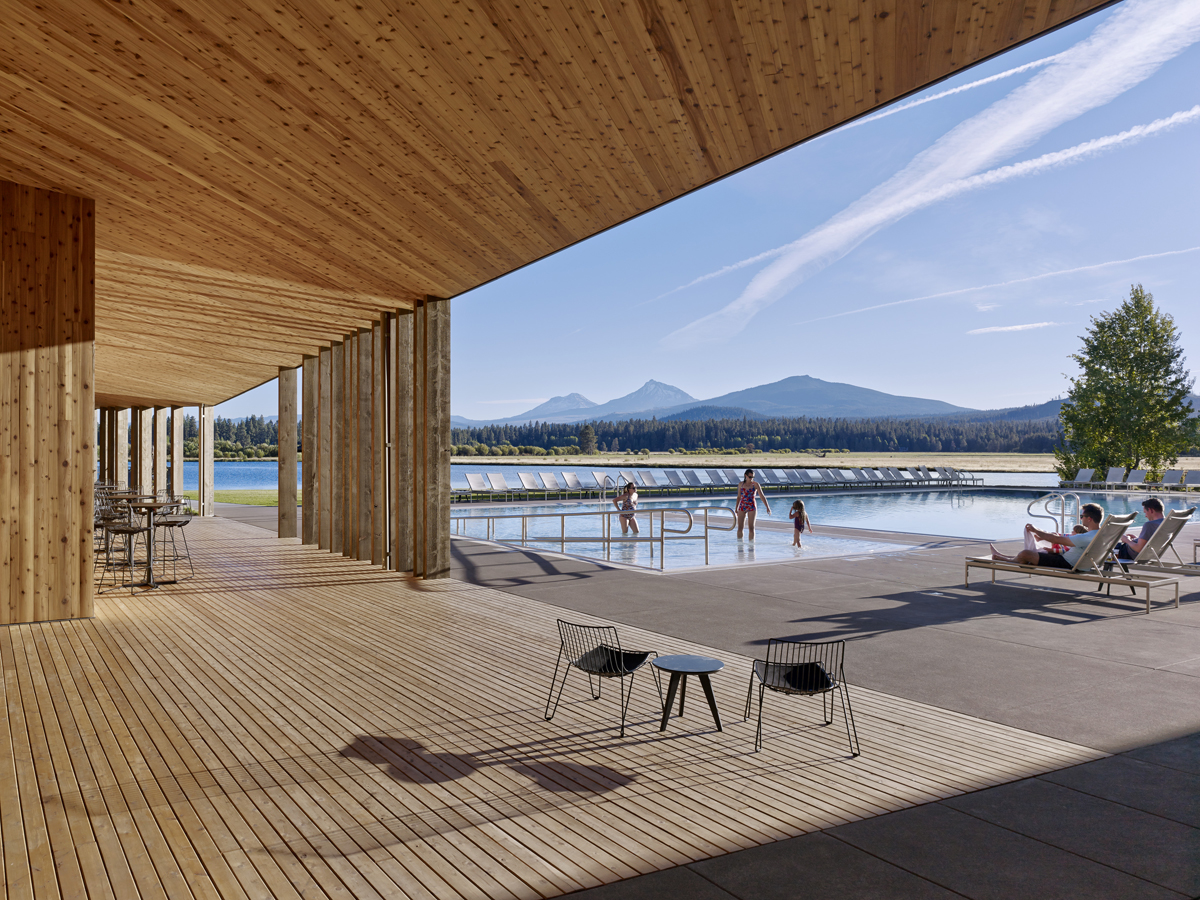 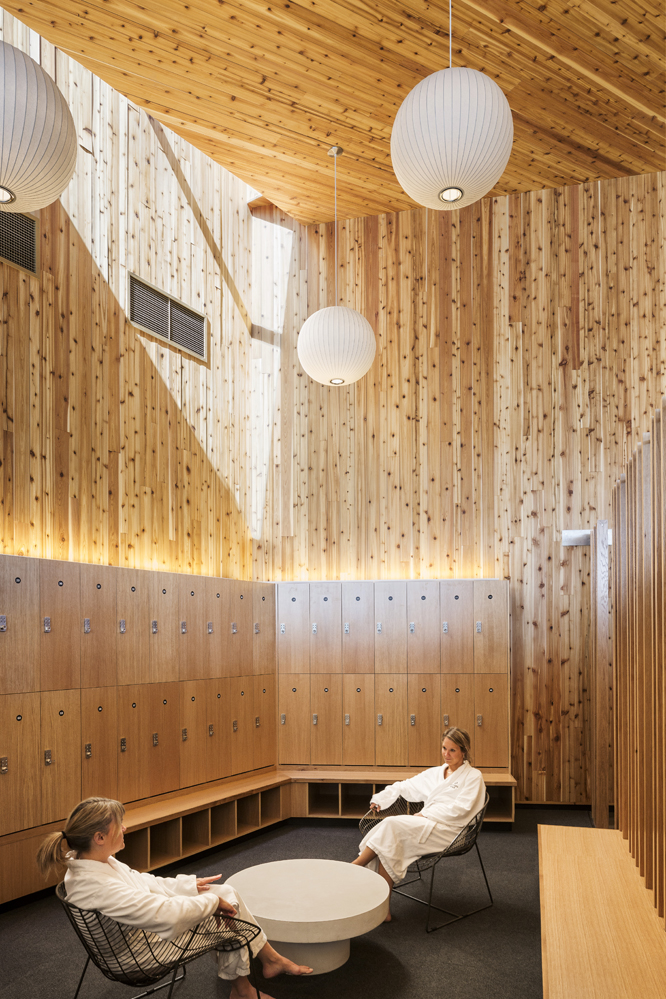 The timber walls in the sauna were made using clear vertical-grain cedar.