Places that Work: A Rural Library

Library visits may be fewer in December and January as avid readers plow through their holiday cache of books. But that trend might not apply to the Round Top Family Library in rural Round Top, Texas. Here, on a recent visit, I discovered the library that dedicated townspeople have made into a place to enrich […]

Library visits may be fewer in December and January as avid readers plow through their holiday cache of books. But that trend might not apply to the Round Top Family Library in rural Round Top, Texas. Here, on a recent visit, I discovered the library that dedicated townspeople have made into a place to enrich their community’s lives in many ways.

Cheryl and Chris Travis are the masterminds behind developing the library; Sterling and Marianne McCall financed it. In 1999, Chris spotted the derelict Hope Lutheran Church forlorn, in a farmer’s field. The once-proud structure had been moved there and became a hay barn. Though its original purpose was gone, the former house of worship still had the bones of a wonderful space, so did its decoration, like the tin plates that line its interior. This discovery propelled Chris to find a way to move the building from the field to a centrally located spot where it could serve as a library – its third functional life. The move required Sentient Architecture LLC, the Travis family’s firm, to cut the old church building into seven pieces, to be reassembled later on its new site. Then an extended period of restoration began. 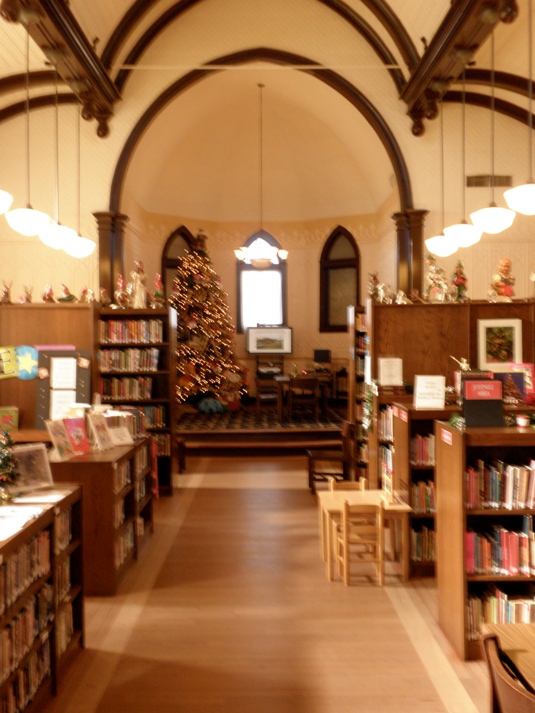 Ecological psychologists, in probing people’s behavior in everyday settings, have developed the idea of “behavior settings”. They tell us that churches and libraries evoke similar behaviors. In each of these places, people learn to speak in hushed tones and behave with respect for others; and they both have traditionally served as community centers. Since the Round Top Family Library still looks a lot like a church, inside and out, the theory of behavior settings may, in part, explain why it’s so popular with the community. Its form, it seems, “told” them how to act in it; their natural patterns of behavior were perfect for a thoughtful, community-centered space.

It also helps that the building has been beautifully restored.

Stained glass on the entry doors, for example, depicts open books.  The decorative tin plates have been refurbished or replaced as needed and painted shades of buttery yellow. One of the two restrooms is designated for small people. When the light in the small person’s bathroom is turned on, an old fashioned carousel surrounding the bulb revolves.

Sustainability is really what the Round Top Family Library is all about. The old structure was reused with sensitivity to its original function, while it celebrates its new function. The new library supports the community’s love of reading. And it provides a place for Round Top’s 77 citizens to bond and maintain community ties. This formerly sacred place works really hard to accommodate its new and more-worldly mission.