What would it take to make you wish you were in Alaska in the dead of winter? Perhaps a collection of large-scale installations, out-of-the-ordinary performances, and impressive exhibitions could convince you it’s the place to be. Enter FREEZE, a multifaceted festival to draw on the creative energy of the northern climes, going on now through February 2. Among the arctic-inspired installations—cars frozen in an artist made lake, an “icequarium“, a catapult for participant-made ice sculptures that makes drinking water (to name a few)—stands the 84 foot wide Northern Sky Circle by 2004 Next Generation Design Competition** runner up Vancouver-based molo. The design studio is no stranger to creating elaborate constructions with simple materials and are best known for furnishings made from paper. For this project, they’ve turned to Alaska’s greatest natural resource—snow.

Stephanie Forsythe, who co-founded the firm with Todd MacAllen, and I discussed their ephemeral Alaskan structure via email.

(**Now seems the perfect time to plug the 2009 Next Generation Design Competition. Don’t forget applications are due this Friday!) 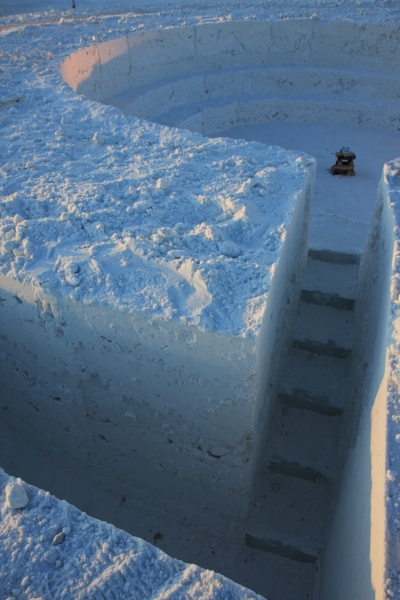 How did Molo get involved with FREEZE?
The installations were co-curated by Brian Carter, professor and dean of Architecture and Planning at the University at Buffalo and Julie Decker, artist, freelance writer, professor, and director of [Anchorage’s]International Gallery of Contemporary Art. Brian and Julie invited us to participate about a year ago and the timing was perfect as we had promised ourselves to look for excuses to spend more time outdoors. Like many architects and designers we work a lot because the work is meaningful to us, but by working too much (especially indoors at a computer) you can easily lose that sense of life that made you passionate in the first place.

Had you ever been to Alaska?
No.

What was the inspiration for the design of Northern Sky Circle?
Our first inclination was to prefabricate a sauna [in Vancouver] and drive it to Alaska as part of experiencing Alaska as a place. But we started thinking more about the snow and weather as a material and decided to embrace the unpredictable nature of the snow and the opportunities it would bring for onsite improvisation.

At the beach in August, we started thinking of the sand as akin to snow in terms of material and as a landscape. We started shaping the sand, designing intuitively with our hands. The idea was to create an experience whereby people could transition from the ubiquitous forms of the city through our abstraction of the northern landscape into a secluded and intimate gathering space. The inner space naturally became circular as a place to gather around a fire, and for the tops of the walls to frame the light of the northern sky. 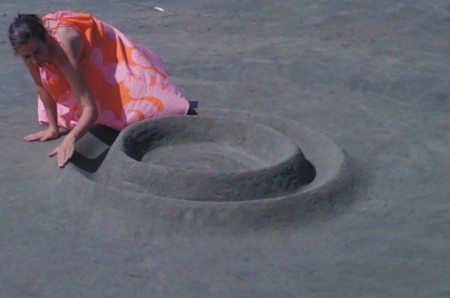 Where are you in the picture of the prototype on the beach?
The beach is in Tofino, one of our favorite places in the world. Tofino is a small community on the rugged western coast of Vancouver Island, surrounded by wilderness. That is me in the pink and orange sun dress-nice contrast to the -30 degrees Celsius of Alaska during the construction of the full scale project! 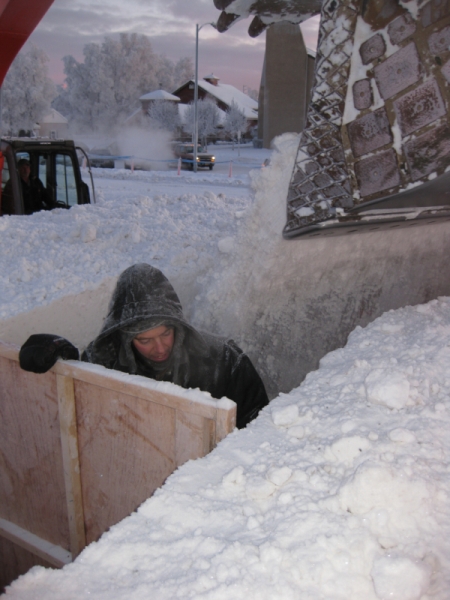 What was involved in building the structure?
We started construction in the pitch dark of New Years’ morning. We spent the first two days on site, learning about the snow, the temperature, what tools were available, and the possibilities of the construction process.

At first we were disappointed with the snow we had to work with. Rather than the pristine white snow we had imagined, it was dirty and full of gravel and garbage, as it was snow that had been cleared from parking lots. But we soon found beauty in this undervalued resource.

As we experimented with the snow and learned about the sintering process that was happening between the different texture consistencies and the gravel and dirt, we became really interested in the textures, almost a geology that emerged. Sintering is a type of bond that occurs as the delicate crystal arms of snowflakes are broken off when snow is shoveled and piled. The rounded grains of broken snow crystals fuse to one another, freezing into a very strong, hard mass. 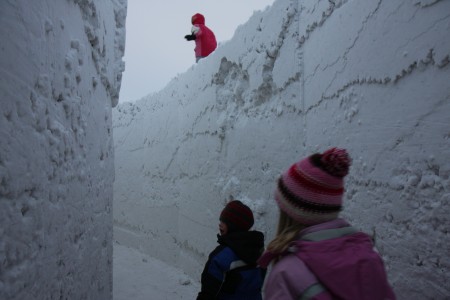 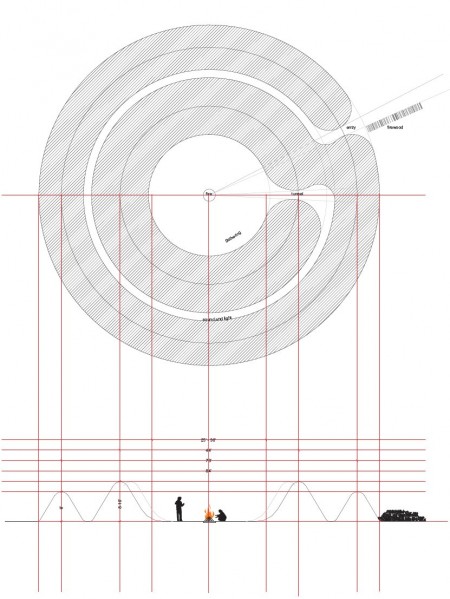 Were there other changes in design as the building process went on?
We also learned that it would be exciting to use hand-held formwork and that the pressure, from the snow pour off the front end loader, would cause us to physically back off and sometimes lean into the formwork creating different shapes in the walls.

The textures and forming process reminded us of Frank Lloyd Wright’s “desert masonry.” In our case, the “arctic masonry” is created by the sintered bond forming between loose piled chunks of snow and the powder filling between.

As we worked, going round and round in circles, we started noticing the details; the texture at the top edge of the snow walls echoes the silhouettes of the mountains in the distance, and the 8-foot height of the walls was working in an interesting way with the low northern winter light-creating a halo of light that glowed at the top edge of the walls as you move through the passageways and sit within the room. Someone observed that “the sun was licking the top of the walls.”

The interesting things we experienced in the construction process became design improvisations so that they could be a part of the experience of the space for others. In making the entry to the narrow winding passageway, we ended up forming it and letting the form work collapse a bit onto us, compressing the entry so that people passing would feel the weight of the snow mass close to their bodies. 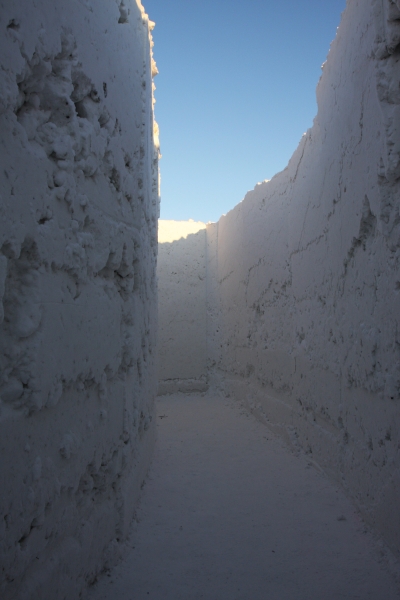 What about the auditory element?
This is a project to be experienced with the senses and a wondrous intricate layer was added to this by sound artist Ethan Rose who traveled to Anchorage from Portland to collaborate with us on the making of this space from the elements of the northern environment. Ethan recorded sounds of ice flows moving on the tidal inlet, the melting of icicles dripping on his glockenspiel, and the crunch of the dry cold snow. Ethan took these recordings and processed them electronically to construct a soundscape that is played in the space. The sounds of Ethan’s music are so beautifully evocative of the crystalline nature of the snow that they bring a detailed image of the snow crystals more sharply into focus in the mind’s eye than can be accomplished with the naked eye.

The sounds, warmth, and smell of a fire at the centre of the circular room also became part of the overall multidimensional sensory experience. 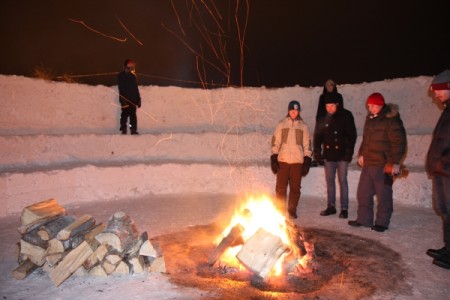 At the end will it be dismantled or left to reintegrate with nature?
Nature is working with all the installations as we speak. After we left Anchorage the temperature jumped from -30 to +8 Celsius! Anchorage is coastal so it is susceptible to large swings in temperature.

The snow structure of the sky circle is an interesting way to measure and experience these changes in the environment. There have been hundreds of people a day touring through the slowly melting passageway even though the surrounding field is flooded with water. The strong sintered walls of snow are so well self-insulating that they have barely been reduced in size at all and children still run along the very tops of the walls. The temperature has now dipped below freezing again and a snowfall is expected. Perhaps the field of water will become an ice rink! We wait with anticipation for new pictures of the site as it is transformed by the weather.