The Artist in the Architect

Large Baths, Hadrian’s Villa, Tivoli; Louis I. Kahn, 1951; Pastel on paper; 7 ½ x 8 ½ inches.Looking through the Metropolis magazine archives, I recently came upon a quote from Eero Saarinen, “To me, the drawn language is a very revealing language; one can see in a few lines whether a man is really an […]

Looking through the Metropolis magazine archives, I recently came upon a quote from Eero Saarinen, “To me, the drawn language is a very revealing language; one can see in a few lines whether a man is really an architect.”

Reading this quote, I nodded, internally, certain that I knew what he meant. Saarinen’s own sketches on the same page were composed of graceful, precise pencil lines sweeping in curves that betrayed an intimate knowledge of volume and structure. The thin strokes were surely the same ones that composed his elevations and floor-plans, because he was really an architect.

Then there is Louis I. Kahn. Visiting the collection of Kahn’s drawings and sketches at Lori Bookstein Fine Art, my expectation of rigid perspective and those thin pencil lines, that only architects use so well, expired at the door. The finality of Saarinen’s quote evaporated.

Kahn doesn’t draw like an architect. Kahn’s drawings are instead personal, emotional. Each subject is unique, with Kahn truly moved by each building or landscape he studied. He had no interest in imposing his own order or technical perfection on the world he sketched. 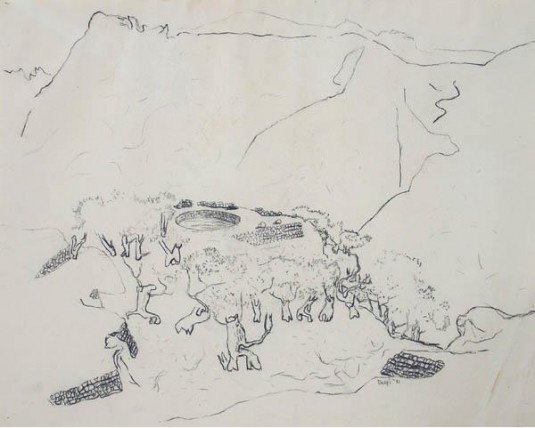 Kahn is quoted on the gallery wall: “I try in all my sketching not to be entirely subservient to my subject, but I have respect for it, and regard it as something tangible – alive – from which to extract my feelings.”

Some drawings are light and whimsical, some moody.

The drawings on view are from the late architect’s travels through America, Canada, Europe, and Egypt in the 1920s through 1950s. Kahn traveled and sketched throughout his life, absorbing his surroundings, and learning from them how monumentality and space impact visitors.

He has remained an enigmatic figure within the narrative of twentieth-century architecture.  His relatively few building projects often broke conventions. A lonely, anonymous heart attack in Penn Station brought his intensely private life to a close. The collection at Lori Bookstein Fine Art is from Kahn’s daughter, Sue Ann Kahn, and offers a precious glimpse into the mind of the mysterious architect. 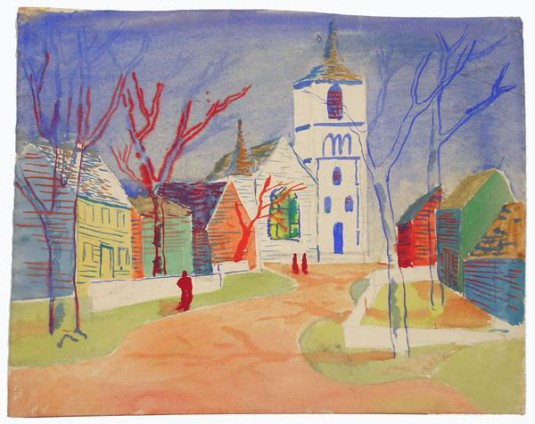 In 2003 Kahn’s son, Nathaniel Kahn, released a documentary, My Architect: A Son’s Journey, stitching together his father’s legacy through his buildings, acquaintances, and the great architects who knew him. Their common memory is one of a bravely unconventional and inspired artist, unique among his equally legendary contemporaries. In the film, Kahn’s son asks  Philip Johnson, standing in his Glass House, if Kahn would have liked the structure.

“Oh, rigid boxes, you know…he was his own artist,” Johnson emphasizes, “He was free compared to me.”