The Docents of Venice

The hits and misses of the Biennale’s conference programming

At the Danish Pavilion seminar

Apart from the opening festivities and rivers of Prosecco, the conference program during the opening weekend filled the schedule. Unfortunately all the seminars came and went within three days allowing limited audiences and very little general public. A who’s who of architects and theoreticians promoted the various curatorial themes. Carrying grand titles and big name speakers, many were a challenge to attend as the schedule resembled the lineup at the Coachella concerts with every headliner in a different location at the same time. Some pavilions such as the Danes built their entire pavilions around the dissemination of information while others included seminars to kick off the opening and attract people to their pavilions. Then others curated various lectures, seminars, and meet and greets for the various participants in keeping with Betsky’s theme of Architecture Beyond Building. 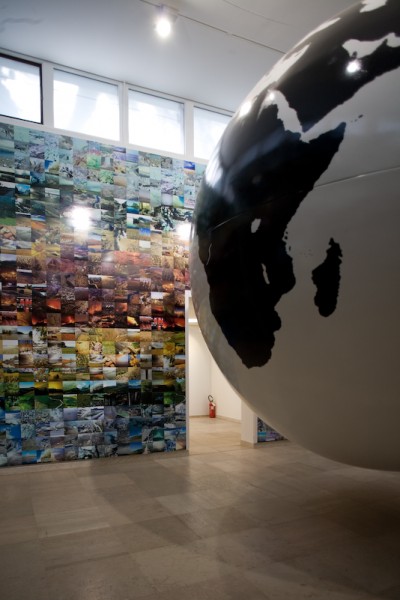 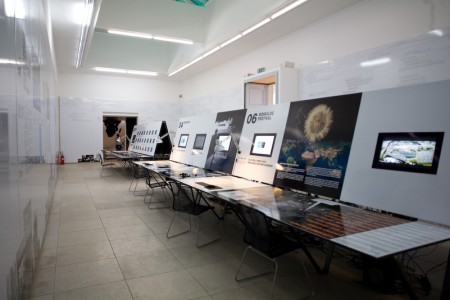 The most inspiring was the Danish pavilion’s global call to arms regarding the environment pushing for people friendly cities of tomorrow. Structured around 7 global initiatives that “Walk the Talk” with images from across the 7 continents, 7 international cities trying new and successful sustainable programs and thoughts and opinions from 7 experts on sustainable city building, the pavilion serves as a hub for information on sustainable design initiatives around the world. Providing an ample amount of refreshingly cold Carlsberg beer at the end of their seminar, they also made sure a large audience heard their message. The Danes challenge the world’s designers to assert a more active role in solving the environmental challenges that lay ahead with examples of solutions and methods of bike-centric planning, mass transit urbanization, and corporate social responsibility. Even pointing to their own successful efforts in Copenhagen, which shifted over the last twenty years from a car to bike culture, they suggest many models for other cities to follow. One would think the environmental message doesn’t represent a country and is an easy bandwagon subject given the current environmental conditions, yet it reminded us that the Danes have quietly been investing in wind power, finding smart solutions, changing their lifestyles and exercising pedal power for several years now and seemed to “get it” well before the rest of us. 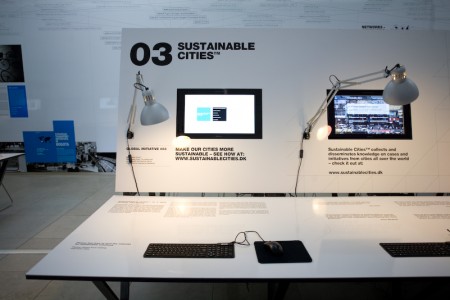 Danish Pavilion initiatives (above) and information (below) 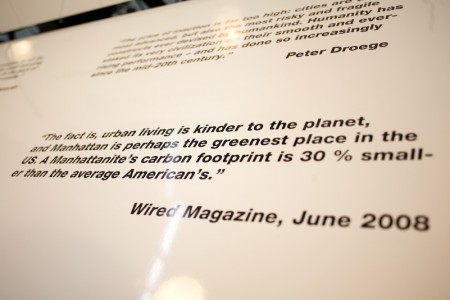 Denise Scott Brown lectured in the British Pavilion on housing across a history of 50 years that at first seemed like an architectural history seminar until you realized that she is in fact old enough that her historical examples of yesterday were all her classmates making her history lecture really more a review of her career. Her criticism of past housing mistakes carried more weight than the typical posturing of the new guard because, in dismissing the efforts of past practitioners, she included her early work’s follies to learn and revise approaches for today’s housing challenges. 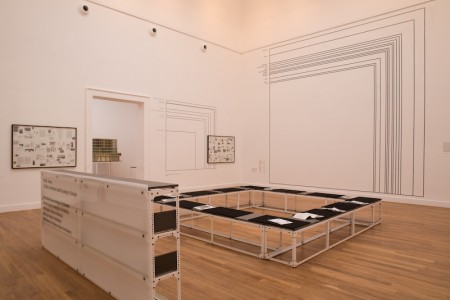 At the British Pavilion

For as many productive seminars and events there were many that didn’t meet the design challenge of a successful exchange of ideas. The Swiss pavilion’s contribution this year centers on their redesigned approach to architectural education that was overhauled a few years ago. Their catalogue contains some of the best work of today’s Swiss architects and approaches book status rather than a catalogue. An incredibly seductive, sinuous brick wall, constructed by the BOT device over the last month, carves the space into blobs befitting the contemporary tendencies towards curves while making horrible actual people spaces. The entry points become choked and a fair amount of negative space lost; trapped between walls. It proved a difficult space for their day of conferences on education with the likes of Matthias Kohler, Teddy Cruz, Wes Jones, and others. Due to the limited space I was not able to get into the space to hear the talks but I later heard Teddy and Wes traded words over the needs and desires for worker housing in the United Arab Emirates. 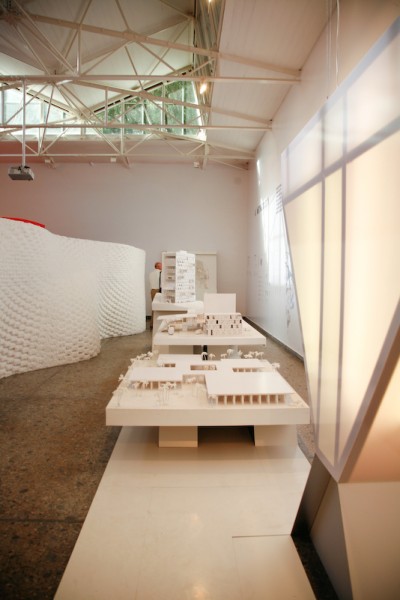 Interiors of the Swiss Pavilion (above and below) 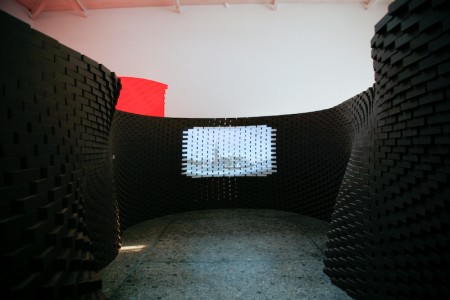 Other seminars and lectures fared even worse. One French prima donna, who will remain unnamed, reportedly accidentally cc’d all on an email sent to the participants of a presentation and indicated the participants were boring and removed himself from the list prompting many of the others participating to question if he was so intellectually superior to the others why he didn’t know how to use email. Concurrently at the Arsenale, Frank Gehry, winner of the Golden Lion for Lifetime Achievement, tried to squeeze a word in between the introduction and long-winded questions from the Mayor of Venice. Known for his verbose eloquence about nothing, perhaps the mayor wanted to appear closer to Frank while distancing himself from the catastrophic Calatrava bridge that quietly opened under the cover of darkness last weekend to avoid further protests for a whole list of design atrocities.

Another rather dismal scene occurred at “The Dark Side Club”… fashioned as a night club with a bouncer … this was strictly an invite only affair. I say dismal, not because the seminar wasn’t interesting, but rather, because the audience, mostly press, was incredibly inconsiderate. The cacophonous roar of their chitchat drowned out presenters; only quieting when the superstars spoke. I wonder how anyone ever becomes a superstar if everyone is always too busy talking to hear what they have to say. At a certain point, someone had to listen to them long enough to let them build or publish or speak. But then, there was a brief pause and I managed to pick out something to the effect of, “constraints of the parameters of the constraints and the verticality and horizontality control the constraints…. What you see here is the result of the various constraints of the regulations of the Italian government, which is very, very tough. There is the fire escape and the parameters of the egress constraints…” Constraints of the parameters? Give me a break, try saying something of value. And Italian regulations? Fire escapes are a new thing? Granted there can be some issues with our own building code that seems at times to favor automobiles more than people but fire escapes are not a bad thing. Anyone that ever tries using a public toilet placed 12 inches above grade stuffed under a stairs so tight that even a pregnant woman wouldn’t fit into the space let alone a wheelchair will understand that the Italian regulations are nothing compared to other countries. In fact, anyone who takes a look at the new Calatrava Bridge immediately realizes that there are no real Italian constraints as his excuse for not making the bridge accessible was that nobody asked him to.

…Maybe the other press folks are on to something…pass me another prosecco, “hi, it’s nice to meet you…” 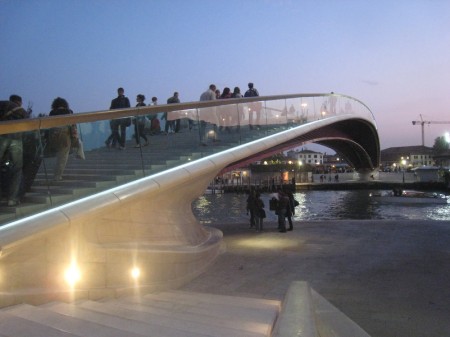