Why Architects Shouldn’t Ignore the Power of Paint

This article, written by architect and CLOG editor Jacob Reidel, originally appeared as “Powerful colors” on Saturated Space, a forum for the sharing, exploration, and celebration of color in Architecture.

Let’s admit it, architects are suspicious—if not a little scared—of color. How else to explain the default contemporary architect’s preference for exposed finishes such as concrete, brick, COR-TEN steel, stone, and wood? Perhaps this is because an architect’s choice of applied color may often seem one of the most subjective—and hence least defensible—decisions to be made over the course of a project.* Indeed, applied color seldom performs from a technical standpoint, and it is the architect’s taste, pure and simple, which is often on the line whenever a specific color is proposed to the client. Or perhaps architects’ mistrust of applied color owes something to the profession’s well-known controlling tendencies and the fact that color is one of the most mutable aspects of a building; better, we architects are instructed, to focus on “important” and “architectural” decisions such as form, space, materials, program, and organization. Indeed, it is far easier for a future owner to repaint a wall than it is to move it.

Nevertheless, the power of paint cannot be ignored. In fact, under the right circumstances architectural color can prove strikingly effective, trumping architectural style and form in its ability to communicate through clear and simple terms. This phenomenon is demonstrated by three official residences of heads of state: the White House in Washington, D.C, the Pink House (La Casa Rosada) in Buenos Aires, and the Blue House (Cheongwadae) in Seoul—three iconic projects popularly defined far more by their exterior color than by any formal or stylistic architectural characteristics.

The oldest and probably best-known example of these is America’s White House. Initially completed in 1800 following a revolution that cast off British colonial rule, the White House was originally referred to in more grandly descriptive terms as the “President’s Palace,” “Presidential Mansion,” “Executive Mansion,” and “President’s House,” though by 1811 the public had begun to refer to the building by its distinctive exterior paint finish, a white mixture of lime, rice glue, casein, and lead over a sandstone façade. In 1901 President Theodore Roosevelt had “White House—Washington” engraved on the President’s stationery, thus making the name official.

Color has an ability to neutralize power associations and to strive for more general, enduring associations.

There are at least two prevailing explanations for the choice of white paint, one with overt political and symbolic overtones and the other focusing on technical performance. The former claims that after the 1814 burning of Washington, D.C. during the War of 1812 and the subsequent repair and completion of the White House, the gray President’s house was painted white to mask—and, presumably, to erase the memory of—fire damage caused by British troops. While the inherent themes of erasure and renewal are no doubt appealing, this story is little more than a myth as the building had been referred to in writing before the war as the “White House”

The performative explanation, on the other hand, is that the White House was given its distinctive exterior whitewash in 1798 to protect the sandstone façade from winter freezing. While perhaps more likely from a chronological standpoint, this explanation remains somewhat unsatisfying in its framing of the choice of color as a purely technical decision. Perhaps a third hybrid explanation is therefore worth considering. In the late 18thcentury the polychromy of ancient Greek and Roman architecture was not yet widely known, and Classical architecture was imagined to have been marked by a platonic whiteness. In post-Revolution America at the birth of a new Republic that modeled itself on Classical Rome and Greece, white buildings would have carried a particularly potent associative power. Thus, if the sandstone President’s house had to be painted to protect its exterior—and even if it didn’t—what better choice of color than white? 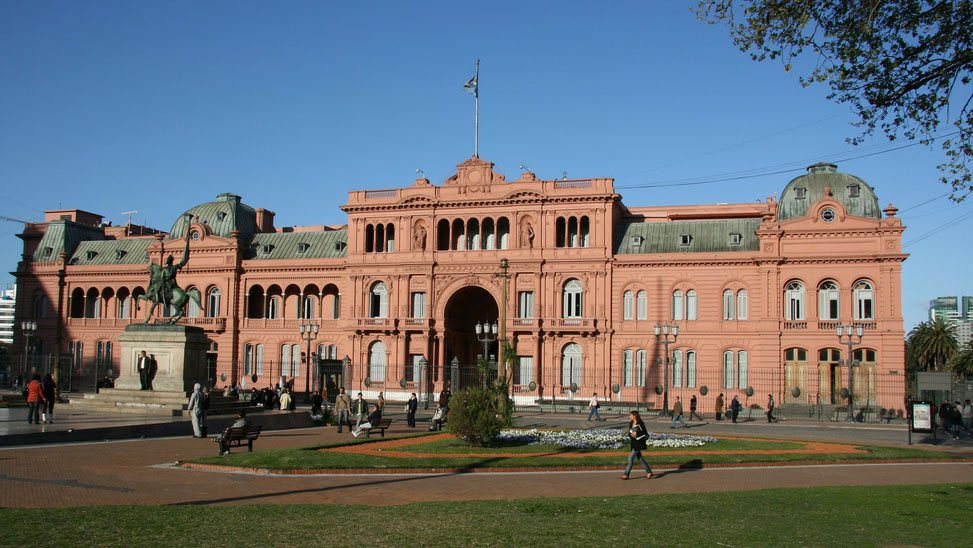 The Casa Rosada in Buenos Aires

Competing symbolic and technical explanations for the choice of paint accompany another famous executive residence, Argentina’s Pink House. Today, the Pink House serves as the official executive mansion and office of Argentina’s President, though the President typically lives elsewhere. As a building, the Pink House’s history is a complicated one, with origins going back to a fortification built during the colonial period. The fortification was largely demolished and replaced by a Customs House by the mid-19th century, which was in turn adopted as the Government House and Presidential offices by President Bartolomé Mitre in the 1860s. Under Mitre’s successor, Domingo Sarmiento, the building’s exterior was significantly modified and painted pink, and a grand central Post Office was built next door. The new Post Office so overshadowed the older Government House, however, that in the 1880s President Julio Roca had the latter redesigned and rebuilt to match the former in appearance and scale. These two buildings were joined together in 1898 by a central arch and the whole collection was again painted pink to match the original Government House.

As with the White House, the stories for why President Sarmiento—an advocate of democracy in a nation with a recent history of colonial and autocratic rule—originally had the former Customs House painted pink fall into two categories, political/symbolic and technical. Perhaps the most appealing though likely apocryphal version is the political one, that pink paint was chosen by Sarmiento to symbolically unify Argentina’s two competing political factions at the time, whose colors were respectively red and white. The somewhat less appealing technical explanation is that the original paint mixture contained ox blood to improve durability. Ultimately, it is difficult to say what the true reason was for the choice of color. However, perhaps any explanation matters less than the fact that when the later President Roca significantly redesigned and expanded the executive residence and offices in the 1880s, so iconic had been the initial selection of pink that the entire new building was painted the same color. 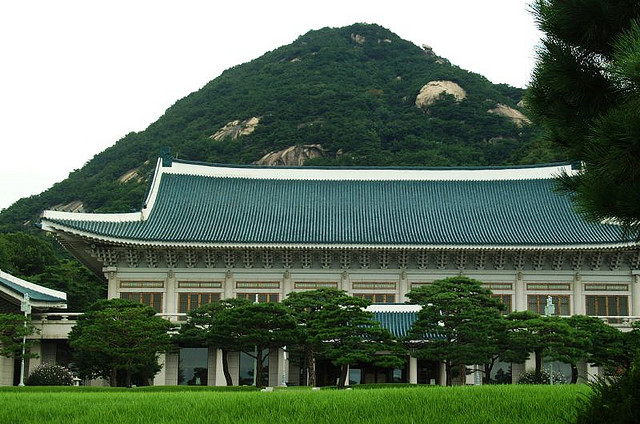 Probably one of the least well-known of these projects is the Blue House, a collection of buildings which comprise the headquarters for South Korea’s executive branch and official Presidential residence. The site of the Blue House has been associated with Korea’s leaders since at least the 10th century, and by the 14th century it had become the rear garden of the Royal Palace (Gyeongbokgung). Most of the historic Palace buildings were demolished during the Japanese occupation in the first half of the 20th century, and in 1939 the Japanese built a residence and office for the colonial Governor-General on the site of rear garden, named the “Presidential Residence” (Gyeongmudae).

Following the Second World War and Korean liberation, President Syngman Rhee of the new Republic of Korea adopted the Presidential Residence as his official executive residence and office. With the ouster of the autocratic Rhee and establishment of a more democratic government in 1960, however, the newly-elected President Yun Bo-seon changed the name of the Presidential complex to Cheongwadae—“pavilion of blue tiles” or simply “the blue house”—in reference to the 150,000 traditional azure tiles covering the roof of one of the few existing pre-Japanese buildings on-site. This constituted an official effort to disassociate the President’s offices and residence from both the era of Japanese colonial rule and the autocratic Rhee regime. Like the American and Argentine precedents, this anecdote demonstrates color’s ability to neutralize power associations and to strive for more general, enduring associations, in the Korean case even transcending any particular party or form of government.

Unlike the White House or the Pink House however, the Blue Houses’s eponymous roof—a hallmark feature of traditional Korean architecture—had long been in existence without warranting public notice or name. It would appear the Blue House therefore illustrates a different association between color and architectural identity when compared to the White House or Pink House, which both gradually acquired popular and later official names in response to their bold colors, as in the Korean example the name was officially constructed. Could it be that by the mid-20th century a new convention had emerged for naming executive residences?

In any event, the three case studies above demonstrate color’s ability to communicate at a level more basic and universal than architectural form or style. Nevertheless, a certain anxiety still accompanies the painting of buildings. In the case of the White House and Pink House, this anxiety manifests itself in the need to either retroactively explain and justify the choice of color through a symbolic/political story or a seemingly rational technical requirement, neither of which can alone satisfactorily and fully answer the question. Interestingly, in the case of the Blue House any reason for the initial choice of color seems largely unimportant, and instead it is the decision to associate the executive office with a color in the first place that is the issue. It is also worth noting that all three executive residences acquired their identities—and popular names derived from these identities—during periods of strongly democratic leadership. In the case of the United States this occurred following a war for liberation and the emergence of a new nation. In the case of both Argentina and South Korea, this coincided with the rise of democracy-leaning leaders following successive periods of colonial and autocratic rule.

In all three cases, there was a need to clear the slate and start anew, and in a new democracy without the unifying symbolism and trappings of a single monarch, party, or religion, it would seem that color itself assumes a particular potency. Given the demonstrated ability of color to supplant architectural form as a communicator of power, perhaps architects are right to fear the paintbrush. However, by doing so they relinquish an effective yet simple tool. After all, what better way to establish a new order than by quite literally painting (or re-painting) the house?

* In this sense, for contemporary architects applied color oftentimes falls under a similar category as ornament, incompatible with a design approach that equates structural and material expression (or “honesty”) with morality.

Based at the Architectural Association school of Architecture and linked to the Phd research program at UIAV, Saturated Space takes a comprehensive look at the “grammar” and history of color in architecture, the perceptual and phenomenological principles of color in relation to the human subject, and the socio-political aspects of color as a culturally active agent.
This piece was edited by Adam Nathaniel Furman, co-director of Saturated Space. Follow Saturated Spaceon Twitter and Facebook.