Shoe designer Chris Francis has designed a collection of “hard, rigid” shoes inspired by the aesthetic and philosophy of Brutalist Architecture.

Chris Francis is not your average shoe designer. Among his idols he cites Walter Gropius, Mies van der Rohe, Josef Albers—and those architects’ influence are unmistakable on his work. Indeed, it was his love of structure that made Francis gravitate to shoe design in the first place. As he explained in an email: “The garment needs the human body to become a full volume. The shoe is capable of existing to its full expressive potential, with or without the human.”

Nevertheless, his shoes are not just sculptural works of art; Francis prides himself in that his creations, like those of his idols, are often wearable and functional—although his latest line may seem anything but.

“Ten Acts of Brutalism” is Francis’ response to Brutalist architecture. The idea struck at the Sunkist building in Sherman Oaks, California, where Francis felt inspired, “confronted by a symphony of geometric concrete.” Although his aim was to create wearable brutalism, Francis admits the shoes live up to their name: comfortable, they are not. In Francis’ words, these shoes are “hard, rigid, and command presence on their own.”

Nor were they comfortable for the designer to make. To ensure his materials and process were as humble and honest as possible, Francis limited himself to a strict budget of $300 dollars and finished the collection under five weeks. He focused on material and texture, using concrete, steel, brass, copper, lucite, tweed, suede, and some leather. Francis even made many of his tools by hand: sewing needles were assembled from wire, sanders from shoe polish cans, etc. Each shoe was an epic, brutal journey: Francis describes how he went about crafting each one, below. 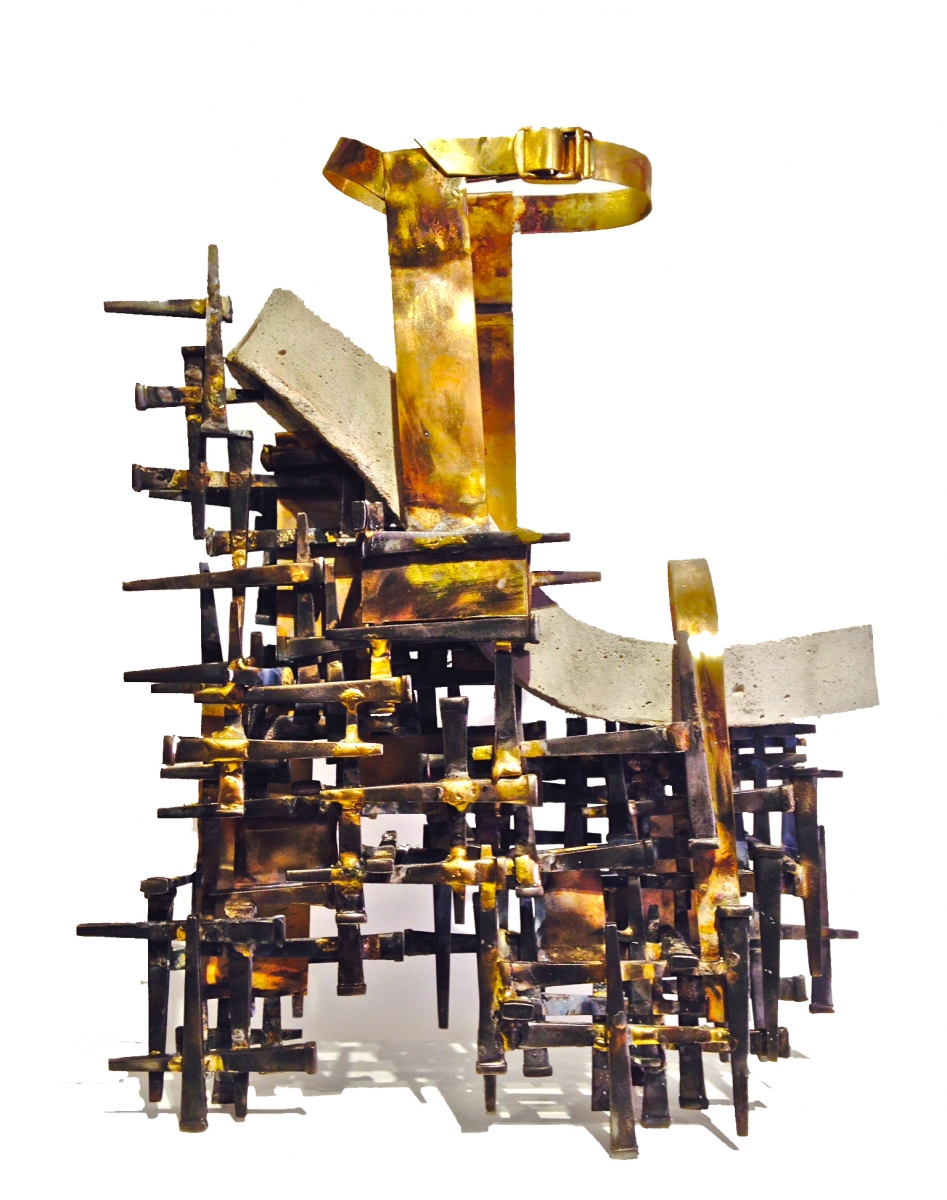 I traded an early pair of my shoes for an oxy-acetylene torch so that I could make the HARD CUT shoe. For the next five weeks I lived and breathed concrete and oxy acetylene fumes to the point of sickness—I became so ill with heavy metal poisoning that I lost over a week of work on the collection. I even got concrete poisoning due to my hands being exposed to so much cement! So only one pair exists!

The Audacity of Huge 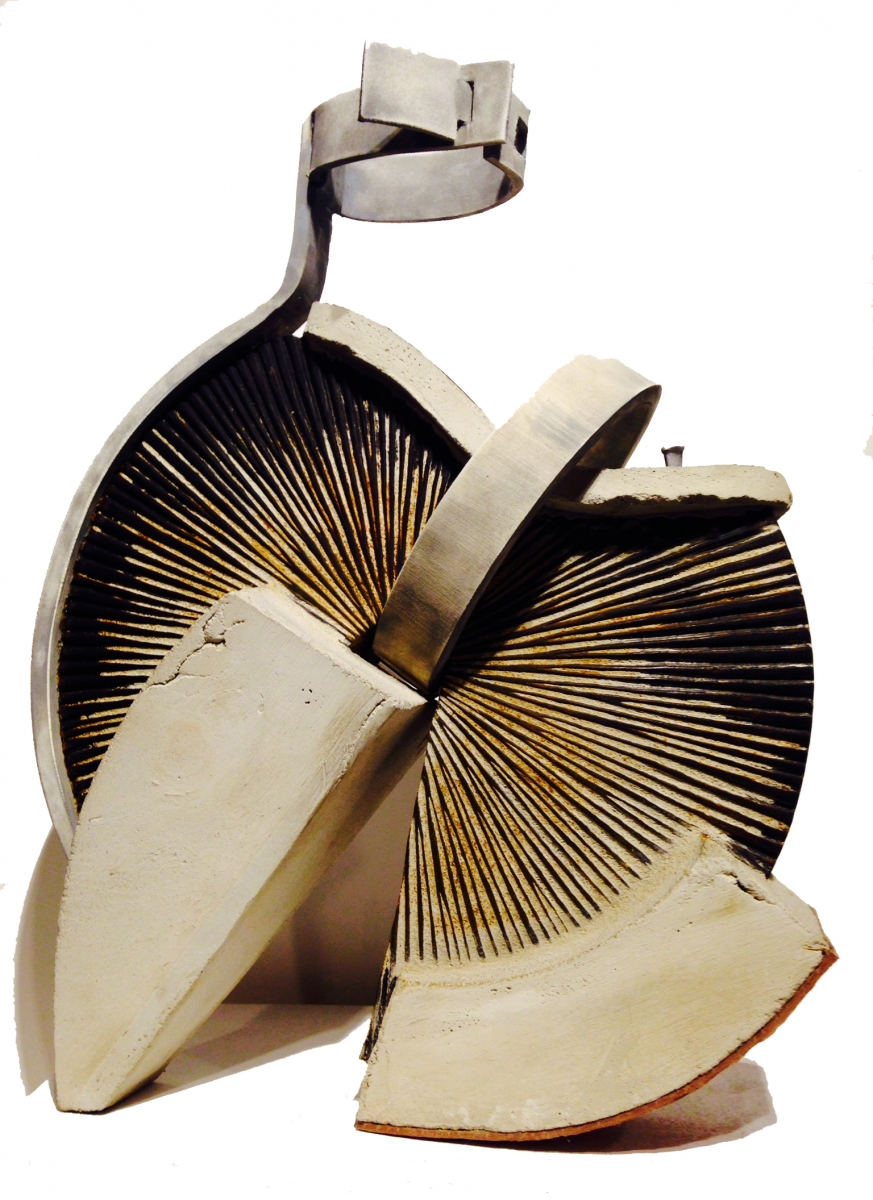 This was the very first creation of the collection. I made it of steel, wood and concrete. I handmade my chisels and poked the holes in the raw sole leather out of hard-cut nails. I wanted even my tools to be brutal.

Towers In The Sky 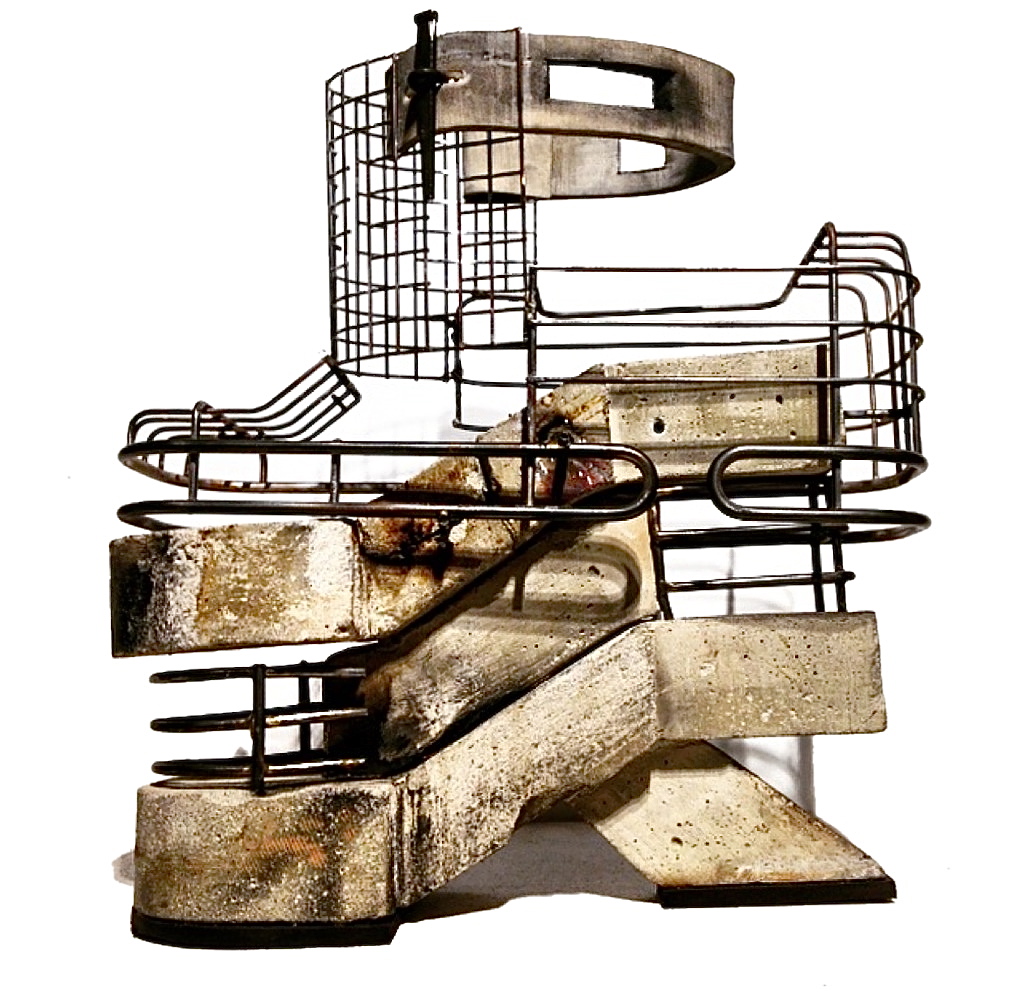 This was a creation that took over five attempts to finally create. I really learned about concrete while making this shoe and gained a further respect for what the architects and builders of these gigantic brutalist buildings were up against—even on a tiny scale, concrete is challenging! The shoe is made in three separate pours and is structurally reinforced with steel.

Music was a major influence during its creation, I wanted to make a shoe that looked to me like how Grandmaster Flash and the Furious Five sound. What I found was that early hip hop was close musically to Brutalist architecture: born from Brutalist housing projects, it’s blunt, coarse, honest, raw, and real. Its undeniable sound structure of heavy bass contrasts with scratching, sharp notes; to me it was layered, audible architecture. The music was simple yet complex, and it really became the sound used to create the whole collection. 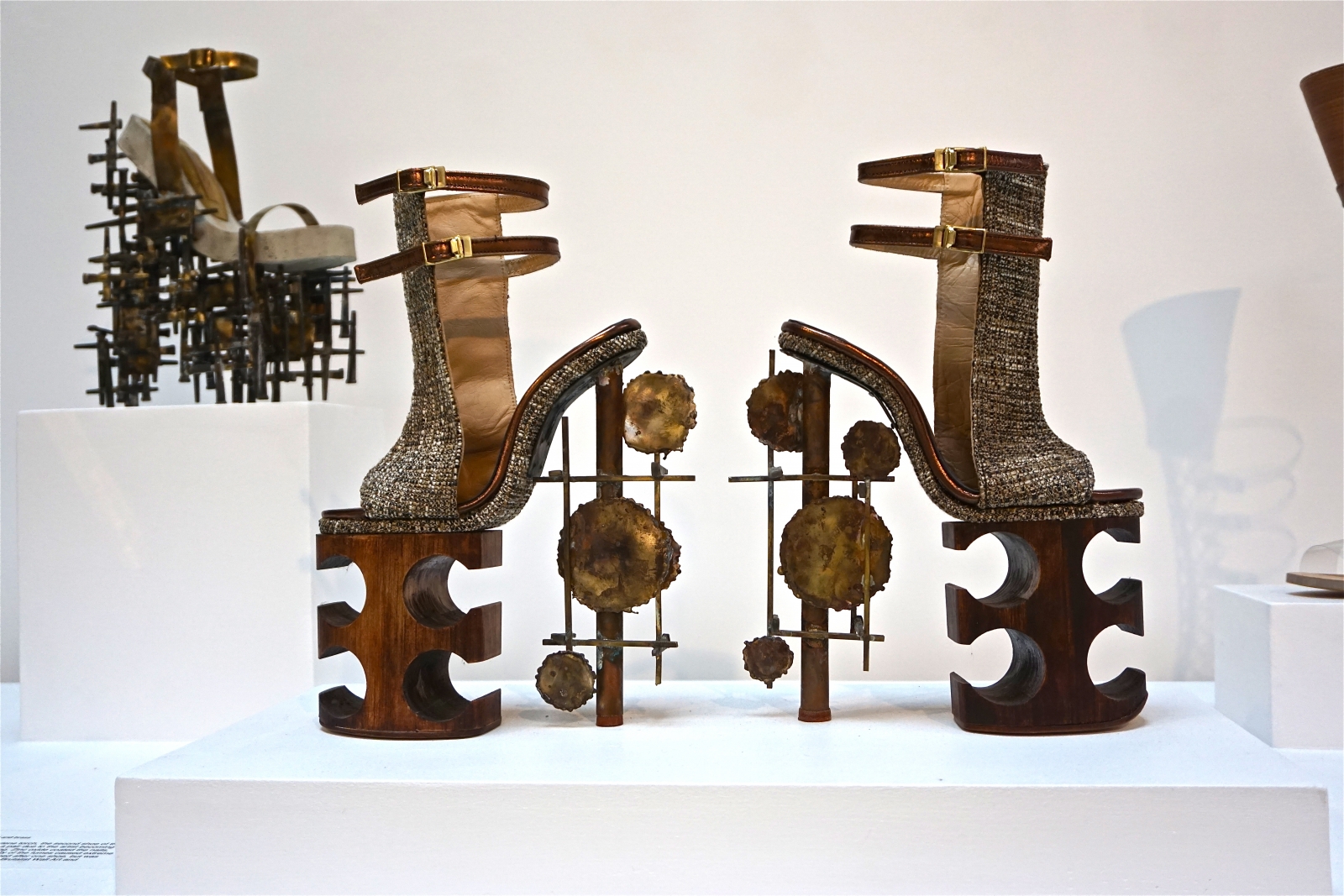 This shoe happened while I was taking a break from concrete and searching St. Vincent DePaul’s thrift store for anything useful. I found a wooden poker chip holder and wondered what its cross section looked like—that made the platforms.

Interior design aspects of Brutalism became a source of inspiration during this pair. I was looking at the work of Marc Weinstein and Curtis Jere, and I started experimenting with torch-burned brass. The uppers were inspired by concrete towers. 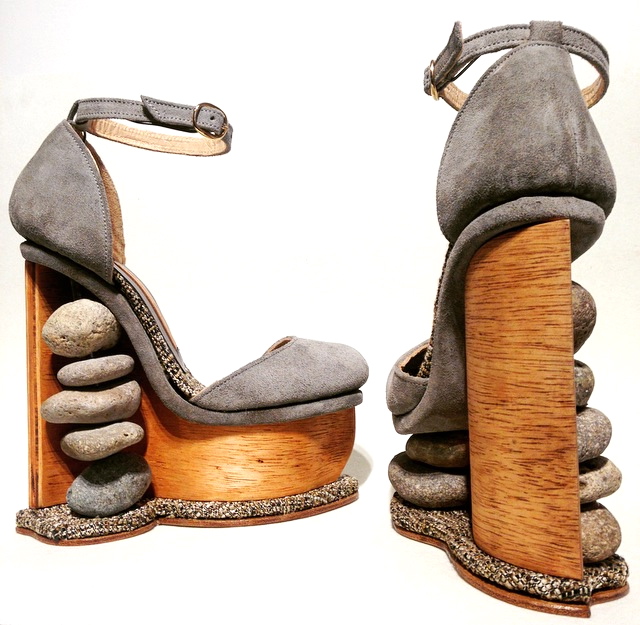 I approach design very angularly, with stiff, rigid materials, often with hard lines. The human foot is round and therefore very difficult to grasp with an angular, rigid approach. I thought  “What if I were only one inch tall? Then the shoe would be a landscape!” So Hardscape is a wearable landscape, the natural roundness of the rocks actually helps to complement the shape of the foot.

I made this pair from the rocks in my neighbor’s cactus garden and an old wine rack.  With the absence of color in the collection, I was navigating texture, weight and form. 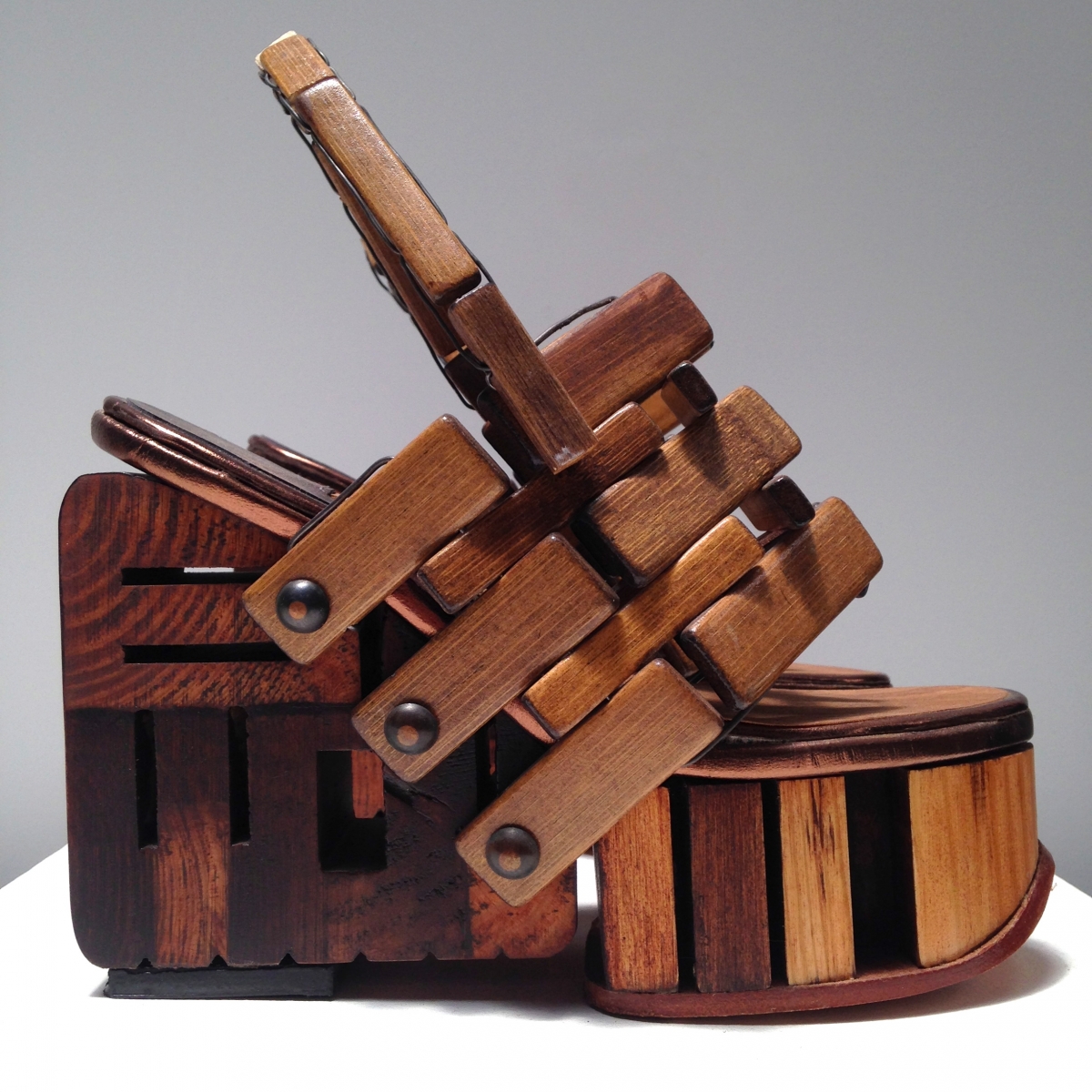 These were made from a kitchen knife holder and a wooden welcome mat. They were an attempt to utilize everyday objects and explore their architectural possibilities. I noticed that kitchen knife holders had many similarities to Brutalist buildings and found that their cross sections were extremely brutal. The welcome mat reminded me of brick work. This pair is entirely wearable. 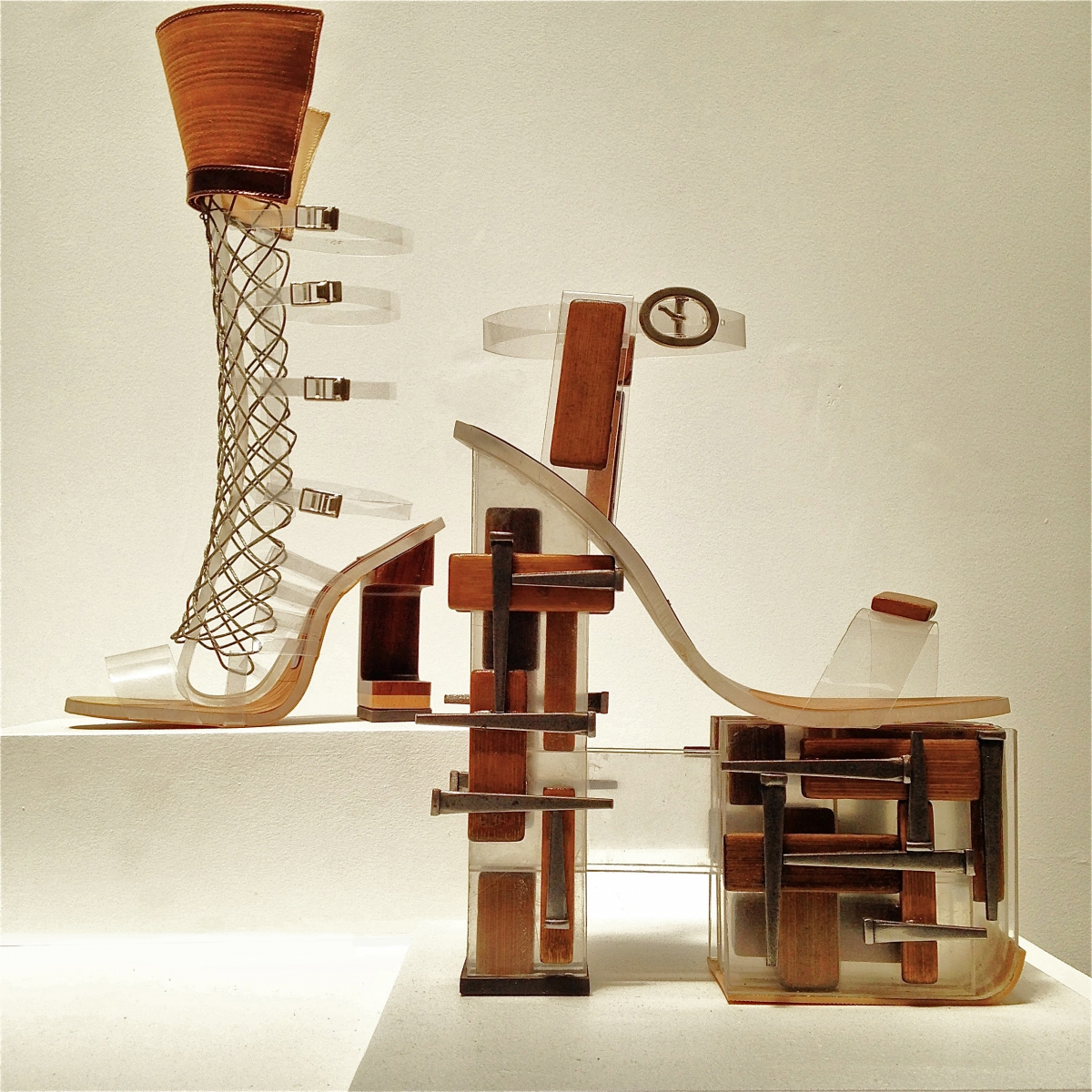 Brutalism was living up to its name during the design of this collection; I began to feel the effects of the lack of color. I wanted the collection to end and remember wishing it was “invisible.” I began wondering what Invisibleism might look like if it were real?  What I came up with was these final works of the collection. I thought that if lack of color and complete honesty was my goal, why not try transparency?

The Invisiblist shoes were made of lucite, steel, wood, and woven cable; they were more about a state of not being, about having no place to hide, and therefore being forced to arrive at the complete honesty of the material. 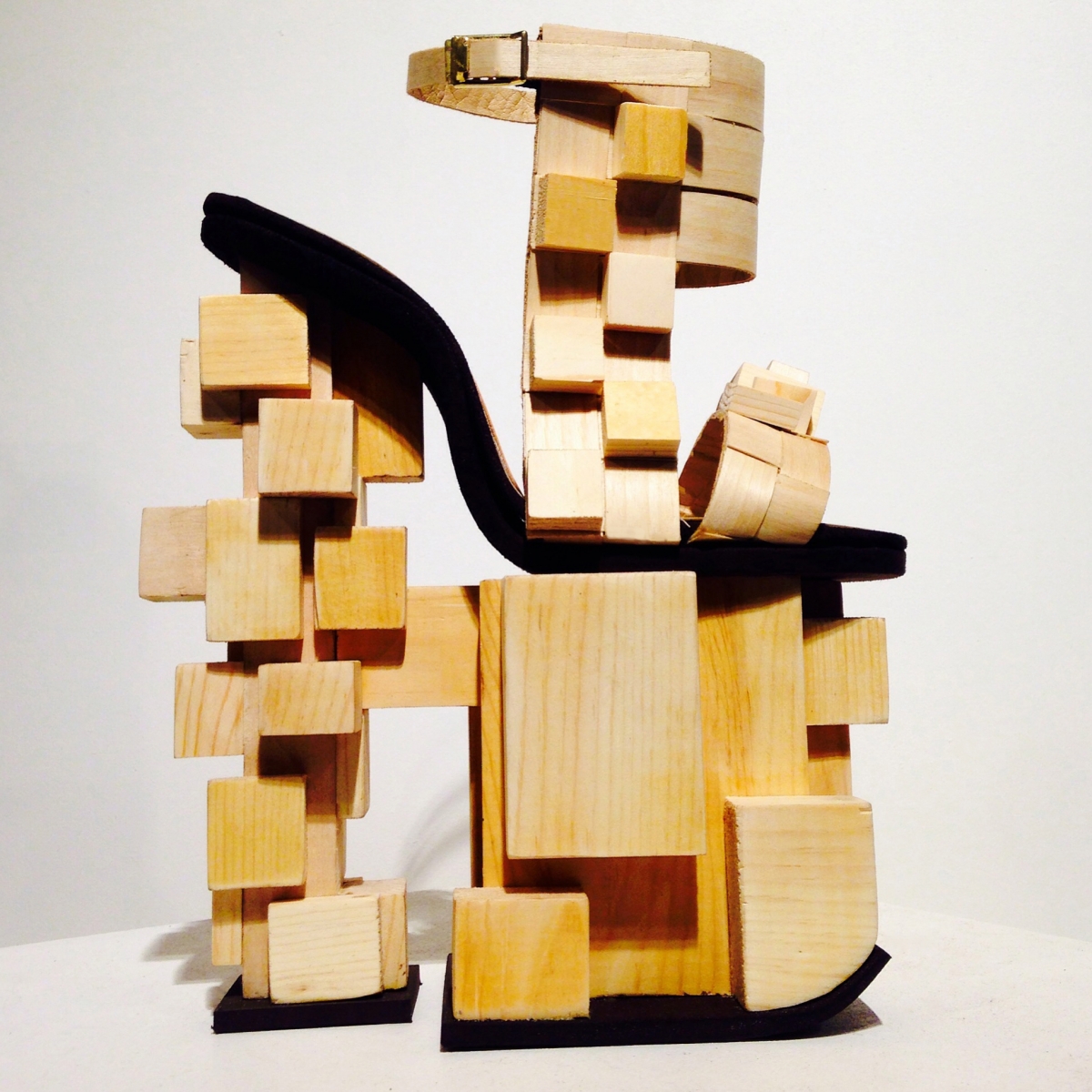 An attempt to make more from less by utilizing available wood scraps. This pair was inspired by Brutalist wood furniture pieces and is wearable all the way to the store and probably back!

The upper is made from woven wood edge banding, lined with leather. As a cabinet maker I often used edge banding to finish off edges of cabinets. I found that it became useful for weaving as it offers structural stability and flexibility, enabling motion. The wood is unfinished, I decided to keep it raw. 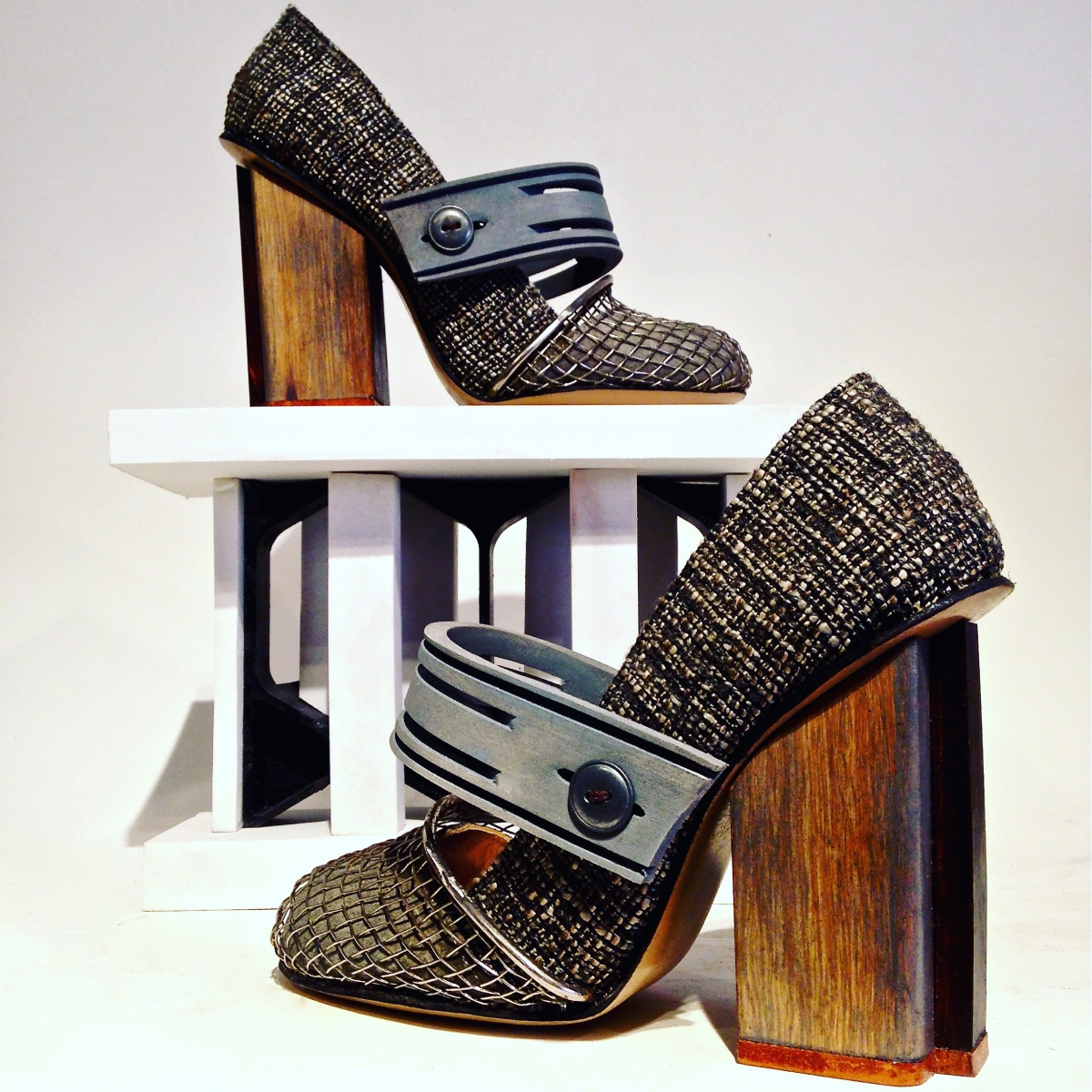 It seemed that many of the buildings that were inspiring me were court buildings, police stations, and federal buildings. I decided to make a traditional court shoe, my way! The toes are steel cages, like jails for the feet, and the heels are solid oak, like the judge’s gavel. The strap is more like a home detention shackle, and the rectangular cut outs were inspired by the LA County Twin towers correctional facility windows. These are courts the brutal way, and they are fully wearable. 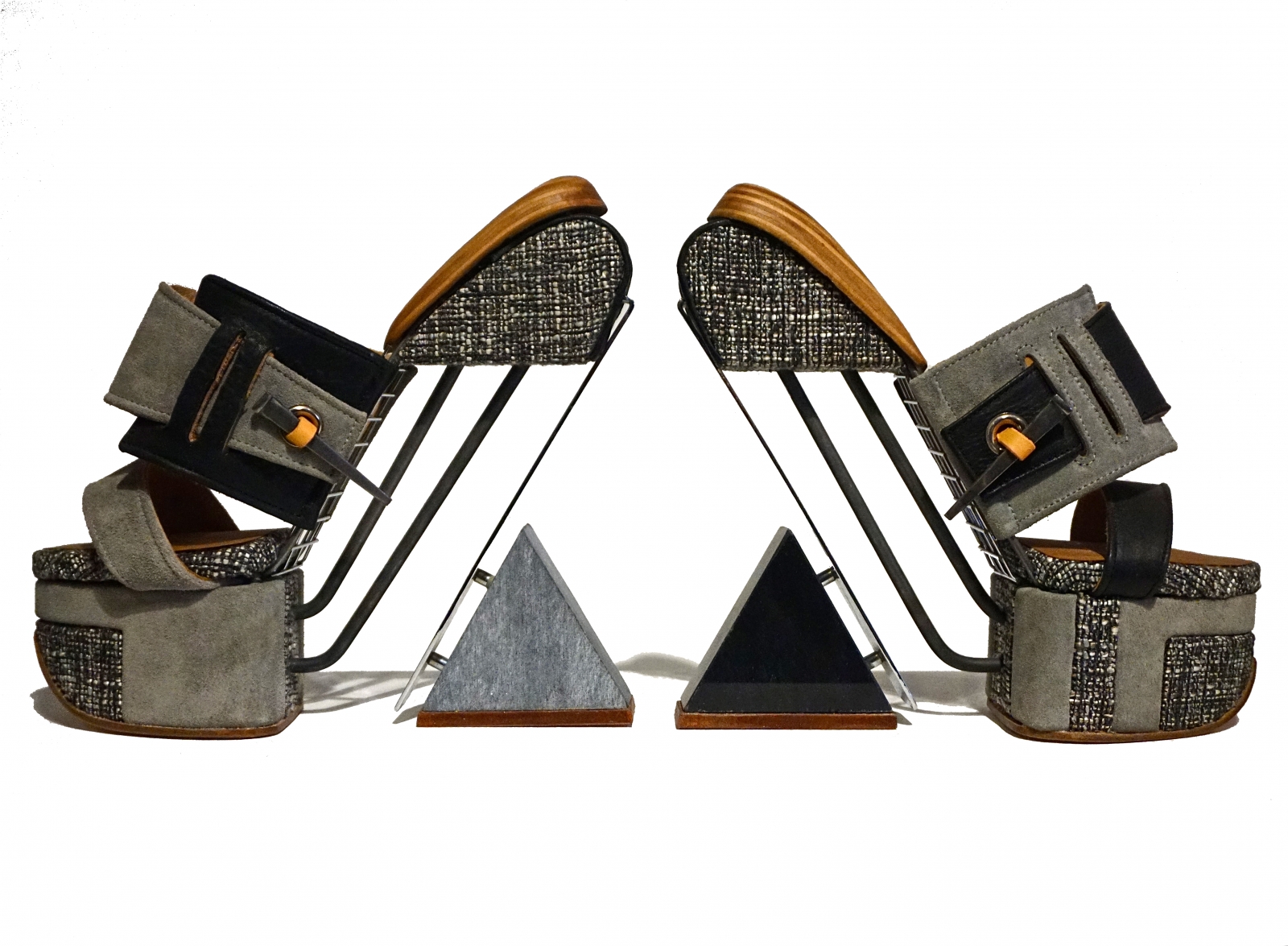 My quest for the small scale utopia kept falling apart. I had been working over and over again on a shoe dedicated to Goldfinger’s Trellick tower, and it kept crumbling down. After I blew an O ring on the cutting torch and nearly burst into flames, I decided to move away from the Trellick Tower by designing this pair!

This pair was inspired partly by Eames furniture and also by Brutalist playgrounds for children. The playgrounds are interesting in the way that they don’t look like much fun: everything is hard, made of marble and steel. The pair is made of marble, steel, wood, leather and suede. The lock mechanism for the strap is secured with a hard cut nail. The orange loop was the only true color used in the collection, in dedication to the Sunkist building, where the idea for this collection originated.

See Francis’ entire collection in person in Las Vegas at the FN Platform, between August 15th and 17th.