Witnessing Evolution at the Solar Decathlon

Darwin knew it when he saw it in 1837. He stepped off the HMS Beagle and observed species that had adapted to the unique environment of the Galapagos Islands; from this he proposed the theory of evolution. On the banks of the Potomac, for the next week, you too can see evolution. Not biological evolution, […]

Darwin knew it when he saw it in 1837. He stepped off the HMS Beagle and observed species that had adapted to the unique environment of the Galapagos Islands; from this he proposed the theory of evolution. On the banks of the Potomac, for the next week, you too can see evolution. Not biological evolution, but rather building evolution. In nature, resource constraints and climatic changes lead to the emergence of new species. Now the same thing is happing in buildings, the end of cheap and abundant fossil fuels coupled with climate change has led to the emergence of a new building “species” known as the net zero energy building (NZEB). The Solar Decathlon (through October 2) features nineteen NZEBs.

Environmental changes also can lead to the extinction of species – the end of the ice age was the end of the mastodon because of over-hunting and climate change. The old species of buildings, the mastodons so to speak, have evolved over the course of the 20th century from having low energy dependence to complete reliance on energy, this is an atypical development in the half-million year history of human-made buildings. At the end of the 19th century, “passive” techniques to manage the comfort of occupants, such as operable windows, slowly gave way to “active” techniques like mechanical ventilation systems.

The opening of the Lever House in 1952, by the architect Gordon Bunshaft of Skidmore, Owings, and Merrill (SOM), marks the evolutionary moment when buildings became reliant on energy consuming technology to work. It was the first major building to require energy to be habitable; occupants became reliant on energy consuming HVAC systems for fresh and tempered air. Bunshaft created a thin tartan gridded façade of single-glazed vision and spandrel panel glass. To achieve this airy and light look, Bunshaft eliminated operable windows, which would have added more lines to his graceful grid. Having no operable windows not only helped aesthetically, and it was reasoned at the time that it also diminished street noise and kept soot out. (Note: Soot was a major concern in New York at that time because of coal burning and the lack of emissions regulations). From a mechanical engineering’s perspective, the sealed windows of the Lever House solved the problem of external variables, but it wasn’t mechanical technology alone that caused buildings to become completely addicted to energy. Cheap energy, policy and regulation, aesthetics, universal application of design approaches, regulation, rigid performance standards, and the “supersizing” have all converged to make modern buildings dependent on energy.

This dependence on a diet of fossil fuels has let us design and build structures that are not adaptable or resilient and in extreme cases are rendered unlivable when “unplugged.” No other event demonstrated this reality better than the flooding of Hurricane Katrina in 2005. A day after Katrina’s landfall, as skies cleared, doctors, staff and patients of Charity Hospital began breaking windows that had withstood the hurricane to get fresh air.  In fact, a witness told the Associated Press, “The hospital was so hot that with no rain or anything, they were better off in the fresh air on the roof.” The patients were evacuated and the hospital was shut down a few days later.  Louisiana’s Governor Kathleen Blanco declared that the hospital wouldn’t reopen because flooding contaminated Charity’s mechanical systems and that had “affected the core operations of the entire building.” Ironically, Charity Hospital was built with operable windows, but they were sealed to limit external atmospheric variables, making it easier for the HVAC system to manage the temperature and humidity. If these windows weren’t sealed for the sake of the mechanical systems the hospital might have been able to serve New Orleans when the city needed it the most. Our buildings have become more about systems than the people who occupy them.

Today, according to the U.S. Energy Information Administration (EIA) buildings use 40% of our country’s energy and generate 38% of all CO2 emissions in United States. On a positive note, the building sector has the largest potential to appreciably reduce energy use and greenhouse gas emissions. The Intergovernmental Panel on Climate Change (IPCC)’s 4th Assessment Report found that this potential is relatively independent of the cost per ton of CO2, and there is an equally high probability for greenhouse gas reductions in both developed and developing countries. This means that with today’s technology the energy use of buildings (both new and existing) can be significantly reduced. 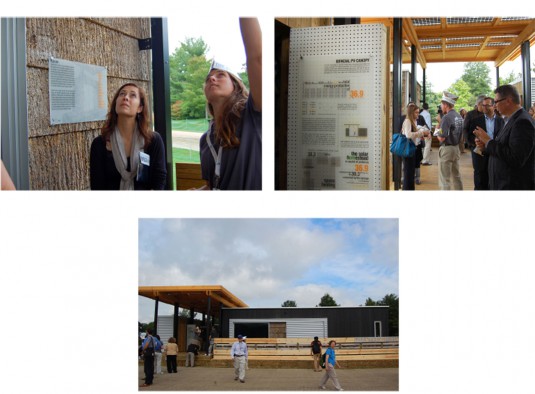 This is exactly what the Solar Decathlon students are doing. Nineteen different teams from universities across this country and aboard have designed and built modest homes of 1,000 square feet that use solar energy to generate electricity, hot water and air with the goal of achieving net zero energy. The “grand winner” will be the house that goes beyond energy balance to be energy positive – generates excess energy to give back to the grid. 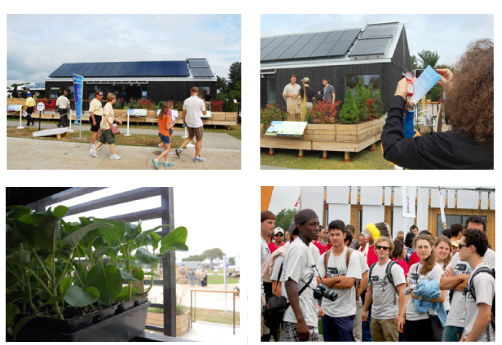 Beyond the technical prowess of the energy system designs, teams are judged on nine other criteria including design. If you visit the Decathlon you should check out the University of Tennessee’s sleek, light, and minimal design, which shows that a net zero energy building can be an eloquent and poetic. Across the road from the Tennessee house are the two most striking projects at the Decathlon: the Middlebury College building and the Appalachian State University House. The first is a warm and straightforward modern version of a traditional New England home that beautifully uses native Vermont materials. The Appalachian design is also based upon local home building traditions with gracious outdoor and interior spaces. Interestingly enough these two teams are comprised of liberal arts majors whereas all the others are architecture and engineering students.

Creating a net zero building is something that most professionals only dream of. This should be a wake-up call for the design community.  NZEB’s are not only achievable but they are being built by teachers, artists, and political scientists. 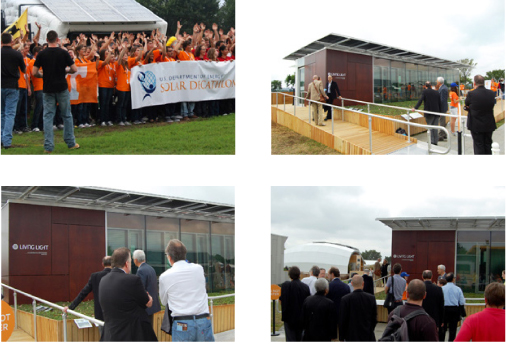 The University of Tennessee / Images: Perkins + Will

Peter Syrett is an Associate Principal at Perkins+Will. His  vision for and experience in sustainability and living buildings have made him one of the firm’s internal champions for green architecture and construction. His expertise focuses on sustainable institutional projects, specifically healthcare and K-12 work. Peter leads teams in viewing the larger ecological picture, one that looks beyond LEED, overseeing projects from brainstorm to detail. Peter’s philosophy on design is the creation of a unique conceptual vocabulary that embodies a client’s mission in space, material, form, and character. He lectures regularly on green institutional design and is a recognized expert in the field.