Basil – Ocimum spp. Photo credit hortchat.com In our last Green Team post, we discussed the potential threat of the voracious Phragmite reed to our wetlands and how to contain it. Now, we focus on a host of plants with more pleasant prospects to help fend off summer’s heat. Looking to cool down this summer? We […]

In our last Green Team post, we discussed the potential threat of the voracious Phragmite reed to our wetlands and how to contain it. Now, we focus on a host of plants with more pleasant prospects to help fend off summer’s heat.

Looking to cool down this summer? We invite you to seek respite by the water’s edge or beneath a shady tree and pour yourself a cold one. You might not be taking an exotic vacation, but the plants in your herb garden or local grocery store might be the key to transporting you to distant shores.

There’s no better time than now to muddle or boil plant leaves, flowers, or roots to make a splash in your favorite iced drink. Here, we list the usual suspects for you to consider, as well as a few plants that may not be so familiar. Give them a try alone or combined for your next cocktail hour—cold lemonade or sparkling water often work well as a base. (And if you’re feeling extra adventurous, pick up the Peterson Field Guide’s Edible Wild Plants or a similar tome and forage away. But do be sure the plants you ingest have not been treated with pesticides!) 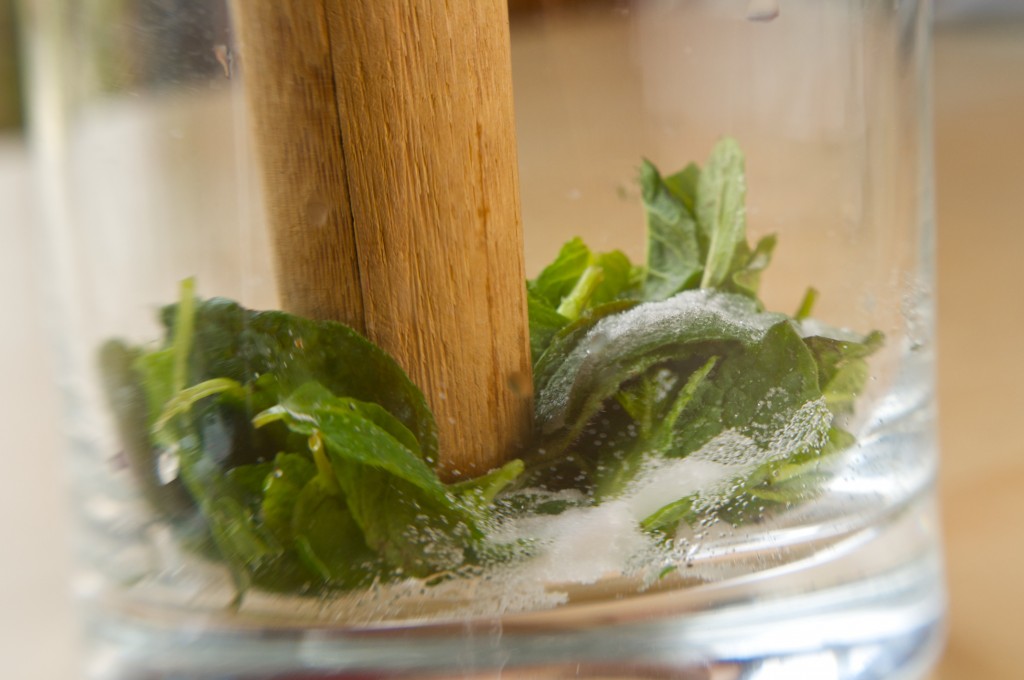 Mint originated in the temperate climates of Europe, Asia, and Africa. In Greek mythology, the goddess Persephone turned the nymph Menthe into a plant upon discovering that Pluto was in love with her. Mint is the key ingredient to that Cuban classic, the mojito. To release flavor from the leaves, muddle with a wooden spoon or pestle, but not so forcefully that they break apart.

If you’re looking for a twist and want to virtually venture across the Pacific, try the Japanese variety, called shiso. To note: Mint is a great plant to grow in your windowsill garden, but think twice before planting it in the ground—this one’s a runner. 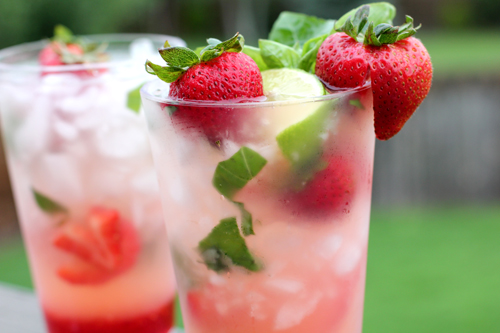 Basil, a member of the mint family, hails from Asia and Africa. Alexander the Great is said to have brought it to ancient Greece. Known for its aromatic leaves, basil’s Latin name invokes both royalty and mythical serpents. It plays a role in many legends throughout history. For those seeking love this summer, consider the Moldavian folktale: a women offers a man a sprig of basil, he accepts, and falls in love with her. To encourage growth and enhance flavor, cut off the branch of any flower buds that begin to form. It’s not just the leaves that have culinary value: steep non-woody stems in liquids or sugar the flowers to eat them. To include basil in your next strawberry smoothie, blend leaves and strain.

A tall shrub with light green pointed leaves, lemon verbena will transport you to the tropics of South America, where it grows 10-to-15 feet tall. Spaniards imported this plant to Europe in the 1700s. It is a hardy, sun-loving perennial in zones 9 and 10. Most tropical plants being grown in colder climates (the greater part of New York City is mapped as zone 7 for plant hardiness, for example) should be brought indoors during winter, including this one. Bruised leaves emit a lemony scent and are most fragrant at the time of flowering. The lemon verbena’s leaves and flowers are used for culinary purposes, perfumes, potpourris, and herbal medicines. It’s a popular substitute for lemon in tea. Moroccan teas are frequently made with its dried leaves.

If the name rosemary, or “dew of the sea” (Rosmarinus derivers from the Latin, ros and marinus), doesn’t say summer, then what does? The aromatic needle-like leaves of this rounded, evergreen shrub—a favorite of Charlemagne, Napoleon, and Shakespeare—were first found along the coast of the Mediterranean Sea. Use it sparingly, just as you would lavender or other strongly flavored herbs. Try combining rosemary with citrus juices to keep your mind from going on vacation without you—the herb is rumored to aid memory. “There’s rosemary, that’s for remembrance; pray you, love, remember” says Ophelia in Hamlet. It makes a good topiary, too. 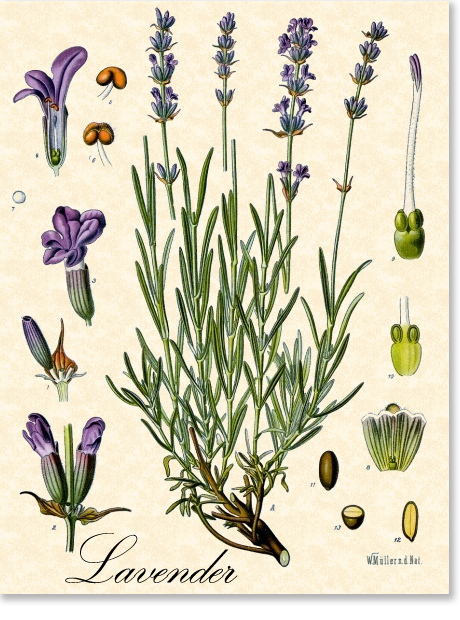 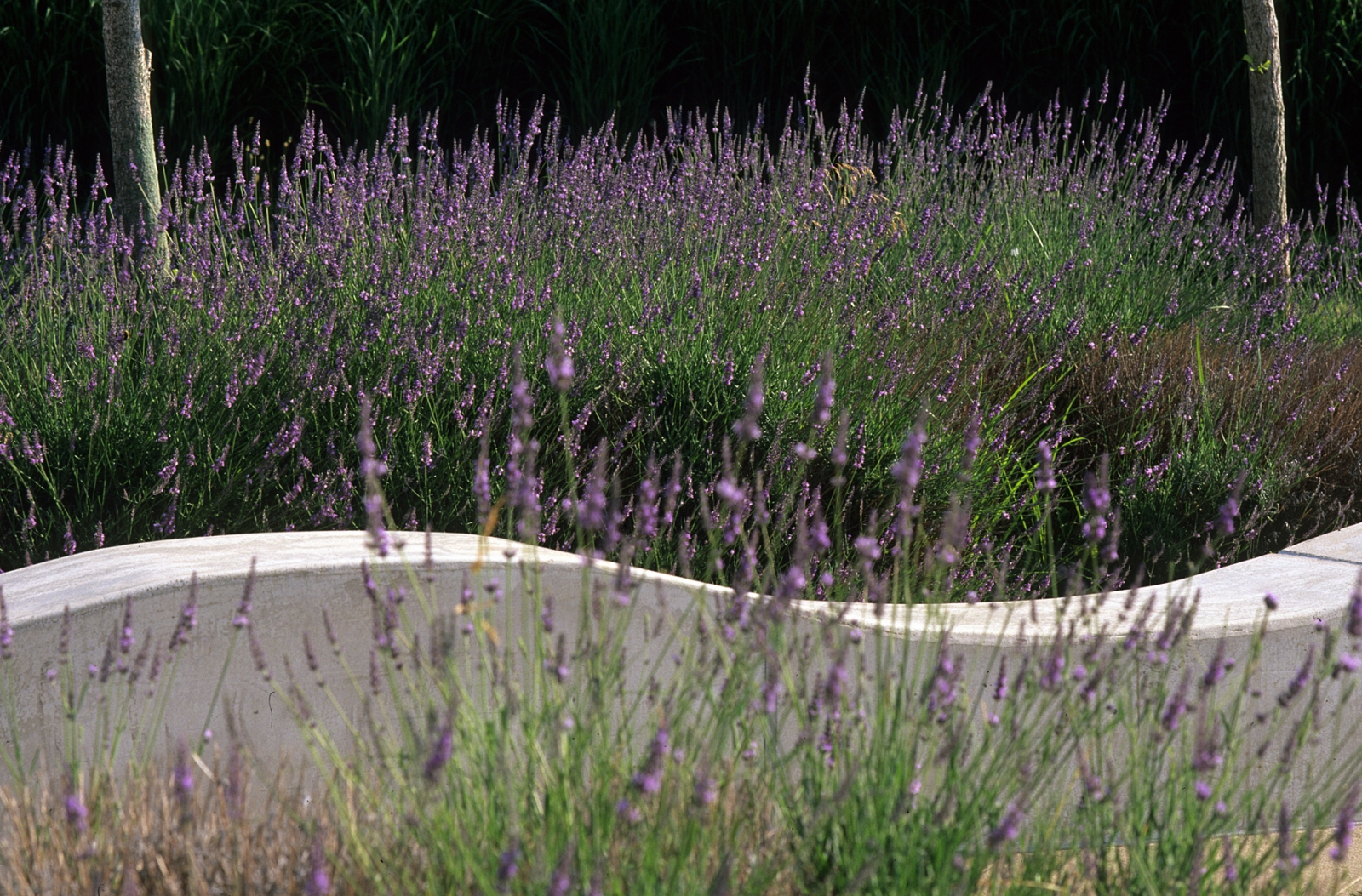 Lavender flowers can be used in landscape design, here at Kingsborough Community College and also in the kitchen.

Gardeners plant this species along garden borders, but you can use lavender’s flowers to spice up your next drink. Native to sunny, rocky outcrops along the Mediterranean Sea, lavender is an all-purpose perennial topped with purple blooms throughout the summer. Known for its calming, soothing effect, lavender oil is a popular addition to perfumes and cosmetics, and dried lavender buds are often found in potpourri and sleep accessories. Its fragrance also works to repel mosquitos and other bugs. English lavender and Provence lavender are species recommended for the kitchen. This savory and aromatic herb adds a sophisticated twist to ice cream and cookies. Simple syrup infused with lavender buds will pair well with honey in your next sparkling beverage, too. 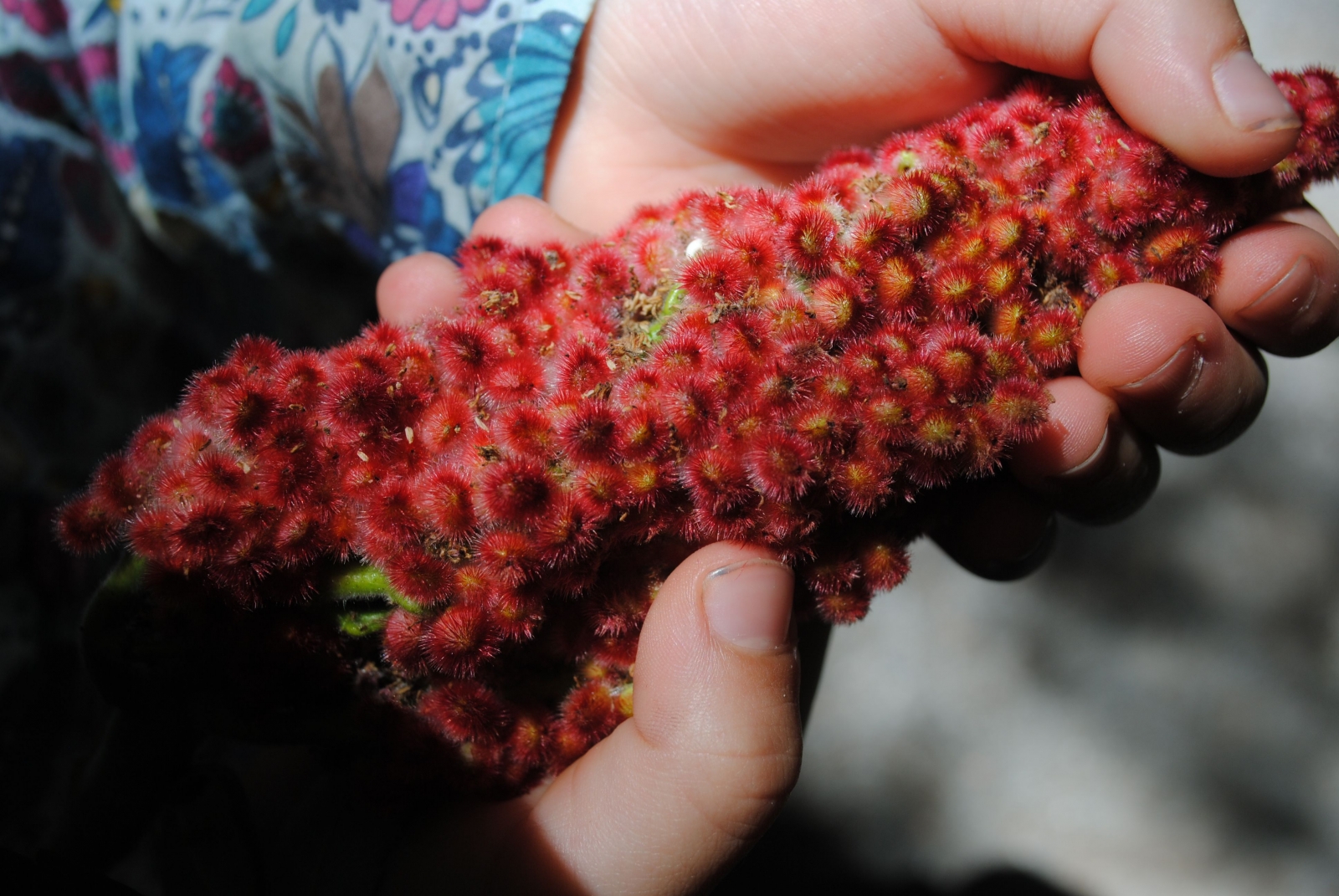 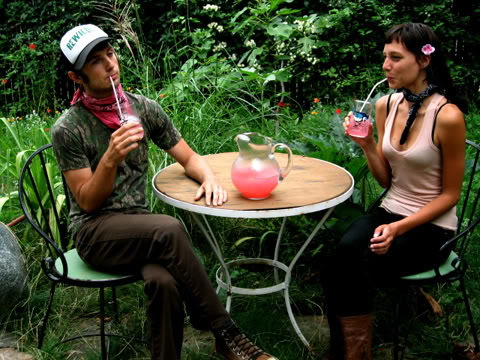 The velvet antlers of staghorn sumac make for tart lemonade.

If you live in the eastern United States, you won’t have to travel far to find staghorn sumac growing on its native turf. You’ll spot this upright, loose shrub on the water’s edge and on the steep slopes beside highways. The velvet antlers of this gangly, suckering woody plant give it its name. The dense clusters of small red drupes, which mature in August, can be soaked, strained and sweetened to make a tantalizing variation of pink lemonade. In the Middle East, the berries are dried and ground into a powder to add tangy lemon flavor to dishes. Sumac is a member of the cashew family, Anacardiaceae. When you’re out on the trail this summer, don’t get friendly with the shrub’s cousin—that shape-shifter is called poison ivy.

A multitude of colorful hibiscus varieties—from small shrubs to trees—are scattered throughout the planet’s warm-temperate, subtropical and tropical climates. It is the state flower of Hawaii and the national flower of a number of countries including Haiti, Malaysia, and South Korea. This ornamental plant’s funnel-shaped flowers are also prized by hummingbirds and butterflies. The flowers make a stellar punch, like Agua de Jamaica (also called sorrel), a luscious-looking cranberry-colored drink comprised of ginger, hibiscus, and sugar. To make a tea, steep the petals in hot water until their colors are gone. 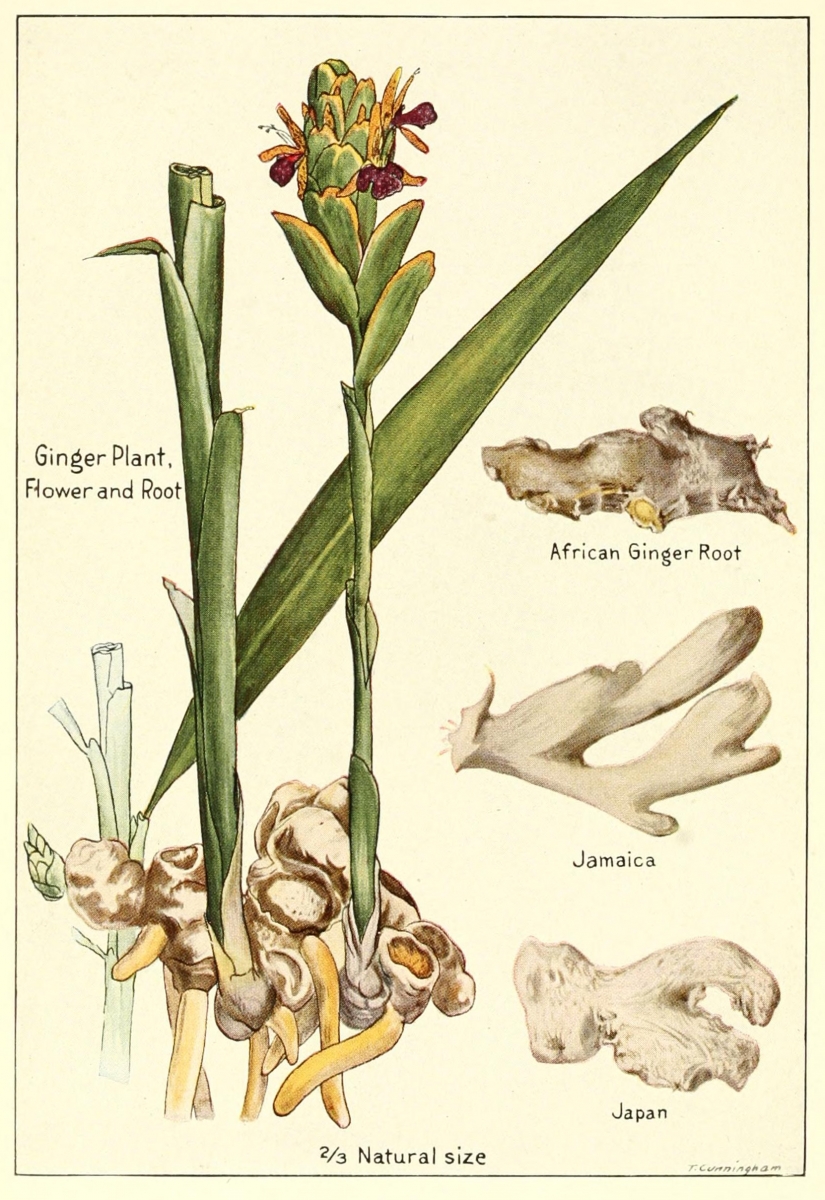 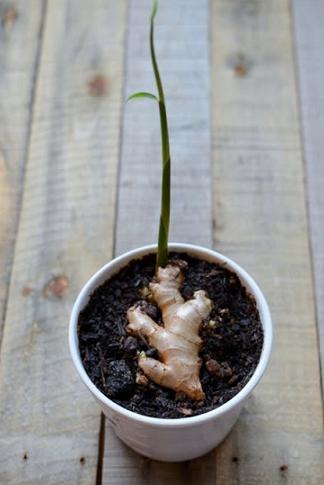 Zesty ginger reveals itself when harvested and incorporated into meals as well as drinks.

Ginger is an herbaceous plant that can be dug up in humid, partly shaded areas of the tropics and subtropics. The Sanskrit word srngaveram, or horn root, which refers to ginger’s distinctive appearance, dates back 3000 years. The knotted root, or rhizome, of ginger has a corky brown exterior and a strong and sharp lemon-scented center. Revered in Asian, Indian, and Arabic herbal traditions for thousands of years, it has been used to treat everything from upset stomachs to the common cold. Combine it with honey, citrus, cayenne and sugar for a spicy, thirst-quenching drink.

After you’ve cooled off, perhaps start planning your own herb garden. Chives, nasturtium, dandelion, and bergamot are just a few of the other herbs that will grow in your backyard or on your windowsill and spice up your glass. In our next post, the Green Team will examine the landscape of play across New York and in imaginations everywhere. Meanwhile, cheers!

Katherine Cannella, ASLA, joined Mathews Nielsen Landscape Architects in 2014 and is excited to be back in New York City, running over the Brooklyn Bridge and picnicking in Prospect Park, after three years of living in sunny Charlottesville, Virginia, where she received her Master of Landscape Architecture at the University of Virginia.