You don’t have to wrack your brains when a completed puzzle box image is your guide. No one has any idea what the newly assembled urban puzzle of Philadelphia’s Chinatown will look like, yet three big pieces, seemingly mismatched in size, shape, and purpose, have emerged.

Walking the city from one puzzle piece to the next, you begin to grasp the challenge. Connections between these geographically separate pieces are genuine and promising, yet more conceptual than physical. Their power to catalyze and unify must be born out in time.

In October, DesignPhiladelphia 2014 revealed in a public forum that, starting this year, a puzzle comprised of a community center with housing (The Tower), a derelict alleyway (The Alley/Pearl St.), and an old railway viaduct (The Rail Park) will begin to dramatically transform and, in ways preserve, an ethnic neighborhood dating back to 1870. 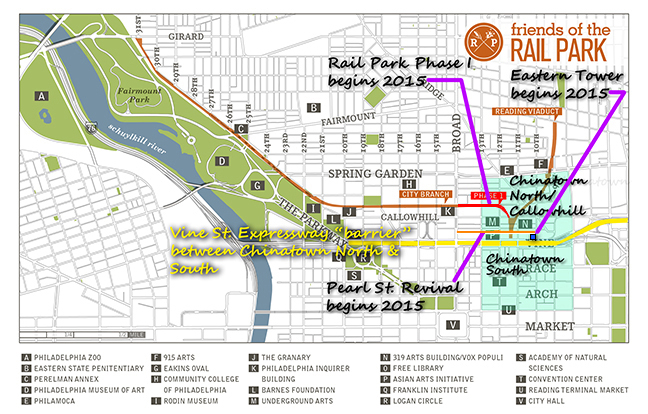 3 public realm projects to launch in 2015

Courtesy Friends of the Rail Park 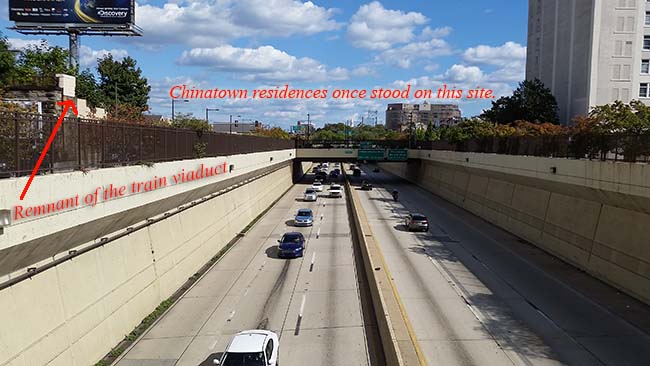 You can’t miss Chinatown South’s massive, ornamented Friendship Gate commanding the entry to 10th  St. It’s an exuberant burst of color in the relatively monochrome Center City. Glistening, amber-colored barbecued ducks are arrayed in the neon glow of shop windows. Pungent smells of fish and fowl waft the air as you weave the thronging crowds.

The Gate leads you north to the sunken Vine St. Expressway that forcibly bisects Chinatown into north and south segments. Those territorial fragments were once bridged by the now truncated Reading train viaduct. Chinatown North is a cultural desert, a mix of non-ethnic, nondescript commercial and industrial buildings. Change is afoot, though. Older buildings are being converted from blight into housing for the privileged.

The affordable, mixed-use housing Eastern Tower Community Center is also scheduled to break ground in 2015. The Tower’s design is steeped in Chinese sensibilities and feng shui principles, its facade reminiscent of a Chinese wood puzzle. Programatically, it includes community and recreation spaces, primary and outpatient healthcare (in association with nearby Hahnemann Hospital), retail outlets, parking, and mixed, affordable and market-rate housing. 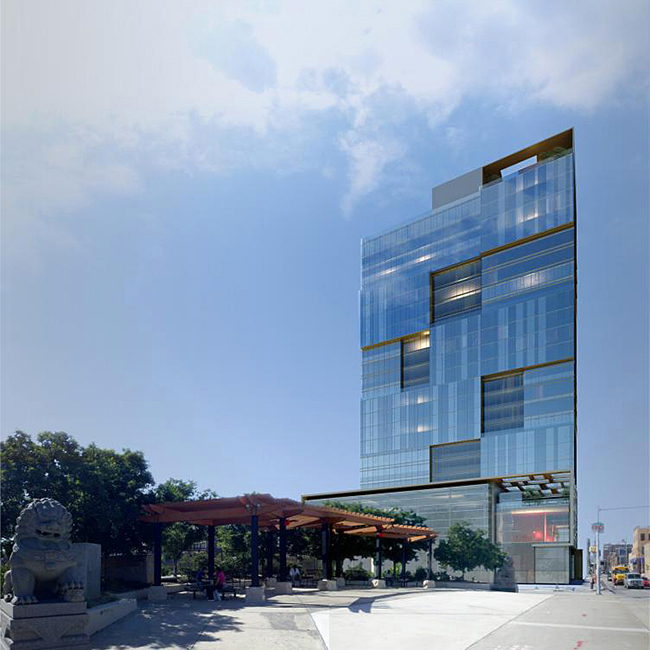 The 23-story Tower will be situated next to an overpass on the northern banks of “the river” of the expressway. Below, commuters barrel through while eighteen wheelers roar and rumble around the clock. The Tower’s striking presence, poised between Chinatown North and South, signals a bold attempt to redress the permanent divide of the Vine St. Expressway. 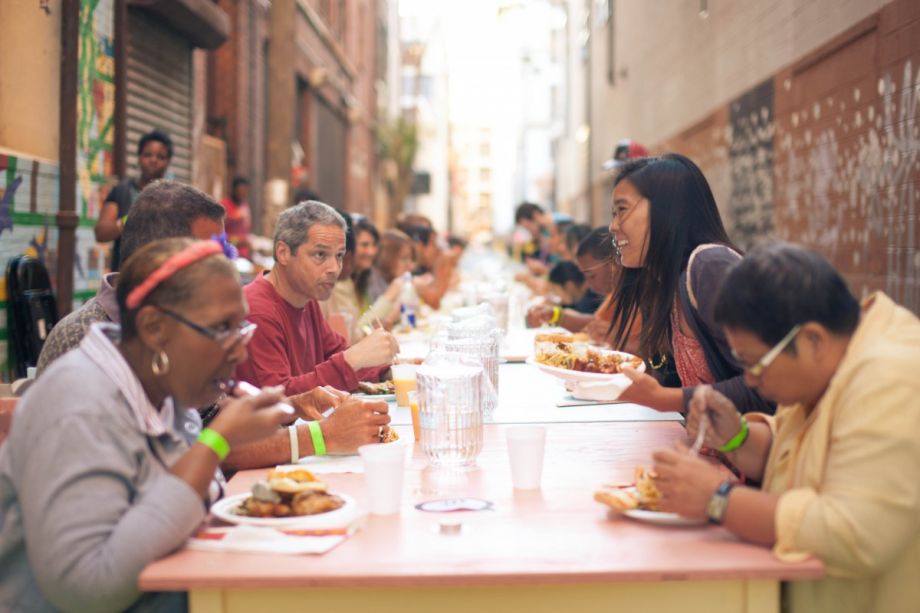 Pearl St., just north of the Expressway and the proposed Eastern Tower is very narrow, dangerous, dark, and dirty. The alley serves variously as an emergency exit, hang out for the homeless, and shield for drug activity. Gayle Isa, Executive Director of the Asian Arts Initiative, sees only hidden potential. Pearl St.’s Annual Block Party vividly demonstrates her vision to promote socio-economic and racial diversity and broaden access to an experimental, linear public space. Asian Arts has engaged Walter Hood, landscape architect, to generate ideas for Pearl St. to “make it a street rather than an alley,” as she puts it. Planting, lighting, and other safety measures have been suggested. A Farmer’s Market, flower market or art market could someday be set up on Pearl St. 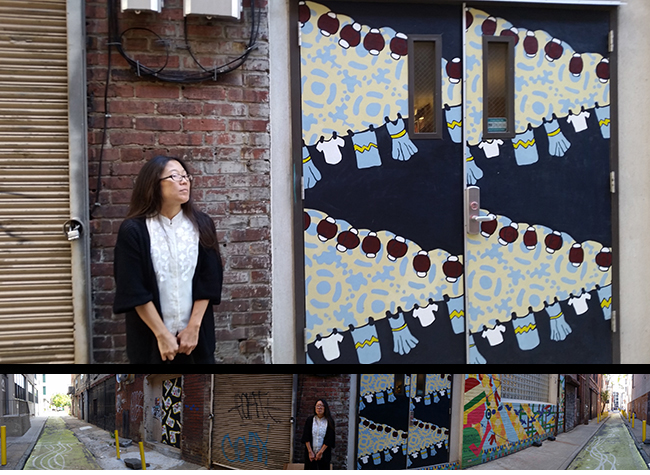 On the west end of Pearl St. (right in bottom photo panorama), on the 1200 block, you have the Sunday Breakfast Mission providing 300 beds for the homeless and serving 800 hot meals a day. Bookending the eastern reach of Pearl (left in panorama) is the high-end Goldtex Building. Isa’s mission is to develop and enliven Pearl St. into common ground where anyone can feel comfortable and safe to roam and relax. 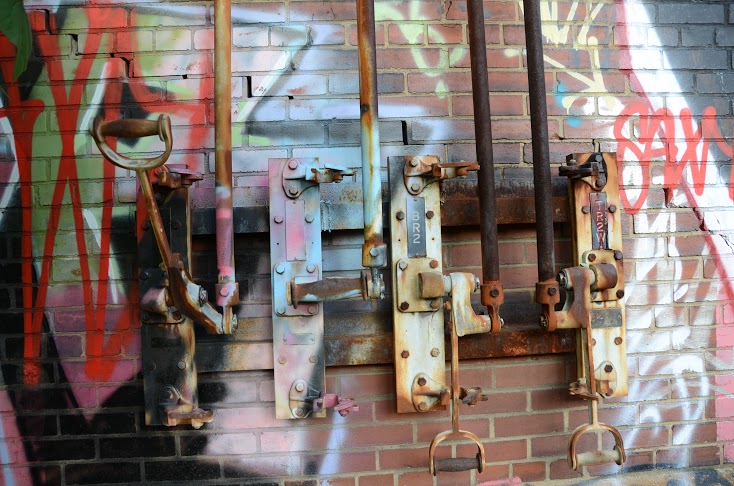 Courtesy Friends of the Rail Park

Abandoned Philadelphia Reading Terminal train tracks, flying above and across 50 city blocks, are already host to impromptu picnics and ad hoc gardens. People have long been leading the way as the city wisely hops inboard. “We want to reclaim it as public, open, green space, “ says Sarah McEneaney, artist, activist and treasurer, defining the core mission of the Friends of The Rail Park. She envisions the nascent Rail Park as a living, outdoor laboratory for discovery, education, recreation, and live connections to small-scale industry.

As Philadelphia’s Reading Viaduct transformation becomes a reality, to what extent will its industrial past remain evident to tell the story? 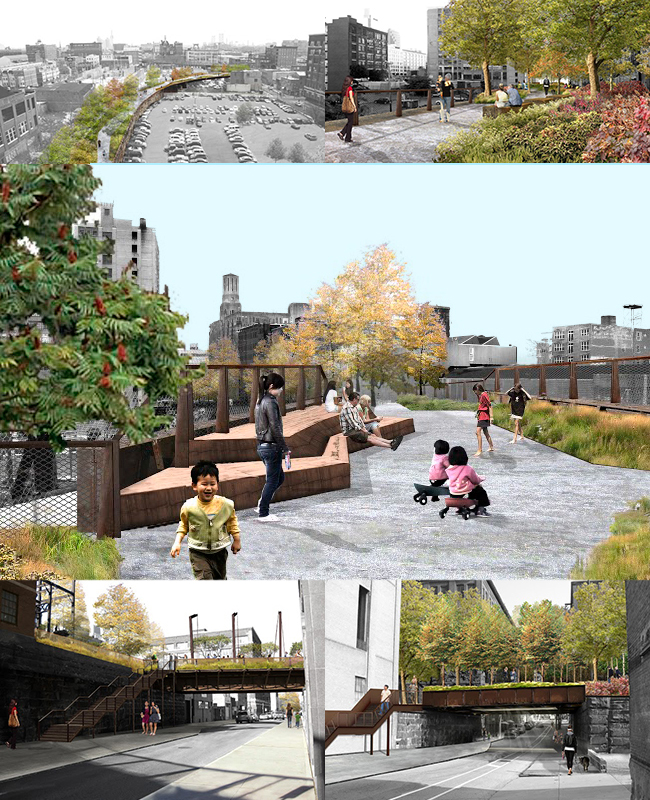 Light is nearing the end of the train tunnel with “shovel-ready” documents for Phase I in hand, a preview of coming attractions. An initial quarter mile segment spanning from N. Broad at Noble Street, will rise up to the elevated Viaduct and extend south towards Callowhill Street, slated to break ground in 2015. The site begins as an earthen ramp, four-tracks wide (100′ approximately), upon which freight trains once ascended towards the still existing Reading Terminal (now a convention center and food market).

Momentum is certainly gaining though there are challenges ahead. Given the realities of funding, “Every park needs a ‘friends group’ these days,” says McEneaney. Capital construction commitments for Phase 1 include $1.8 million from the City of Philadelphia and $750k by the William Penn Foundation. Word is pending on a $3.5 million ask from the State’s Redevelopment Assistance Capital Program, which would bring the project much closer to the total $8.6 million required for Phase 1.

Friends of the Rail Park has been actively fundraising for operations, programming, and maintenance of Phase 1 for just over a year. Last year, they raised about $70k, from fundraising events and individual donations. This year they received some grant funding for operational support and programming from the University of Pennsylvania and Artplace America. 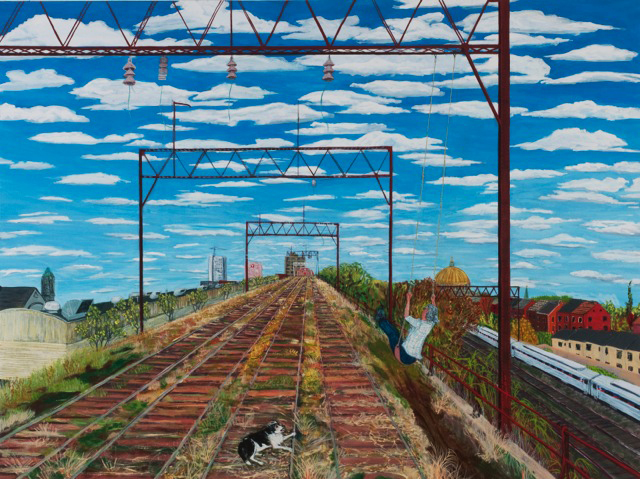 “There are four swings that have been installed anonymously along the viaduct. This one [above] is at the northern end of the Viaduct in the West Poplar neighborhood,” says McEneaney, a self-described “eternal optimist.” She says that New York City’s Highline and The Promenade Ponte in Paris have been a definite inspiration in her 10- year collaborative quest to capture the urban potential of the sinuous track bed in Philadelphia.

The goal is to convert the Viaduct from eyesore to asset without sanitizing the city’s industrial history. Philadelphians like their grit. “I don’t know exactly how that Philly Style will translate,” she says of design gestures that may capitalize on teachable moments, intersections of the old and new.

Obsolete since 1984, the Reading Viaduct will rise like a phoenix catalyzing a vital connection between the city’s industrial past, present and future. Pearl St.’s alley and the new Eastern Tower will both benefit from and contribute to this renaissance. The rail itself chugs by august cultural institutions. The Barnes Foundation, Rodin Museum and Academy of Natural Sciences are scattered like gleaming pearls off a string.

Ultimately, the Rail Park’s 3-mile-long green ribbon will convert an industrial relic into a newly flowing artery supplying cultural lifeblood to the city. 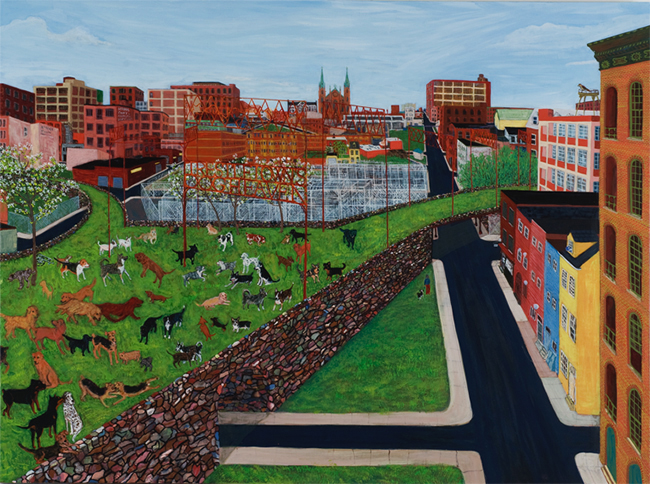 View [above] is from the roof of a 4- story- former factory at 11th and Wood Sts. “I decided to depict the Park as it will be. Dogs entered and it became Dog Heaven, picturing all the dogs I have known that have gone on to dog heaven,” says McEneaney. 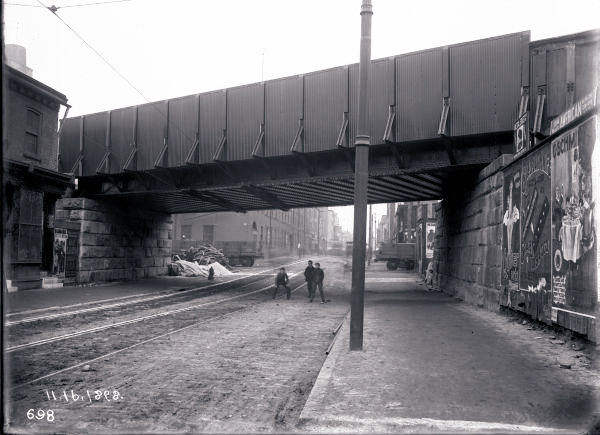 In the 21st century, preserving an historic, ethnic monoculture, curiously, requires an open mind to diversity. It requires nurturing a “multi-ethnic community open to all people,” says John Chin, Director of The Philadelphia Chinese Development Corporation, responsible for the Eastern Tower Community Center project. PCDC is dedicated to “preserve, protect and promote” its Chinese citizens. With some 43% of its constituents living at or below the poverty line, it has clear and urgent priorities including strengthening its bilingual social and healthcare services. Chin talks about maintaining a unique identity, a “Chinatown of substance.”

“All you see is the commerce…people come to Chinatown for food. We are a community! We have 3 Christian churches and 2 Buddhist temples,” says Chin, addressing typical preconceptions. Some population is lost via upward mobility, but there is a counterbalancing trend of Chinese retirees returning to the neighborhood with a marked influx of Chinese teenagers and young professionals. Although Chinatown has been viewed as insular, that entrenchment is perhaps more understandable if you consider the language barriers to gaining employment outside the Chinese community.

Chinese and other cultures in Philadelphia, tied together by the new green ribbon of the Viaduct, may spur a long and vibrant community life. Though the Rail Park, Alley and Tower pieces don’t snap together easily, there’s nothing puzzling about that hopeful prospect. 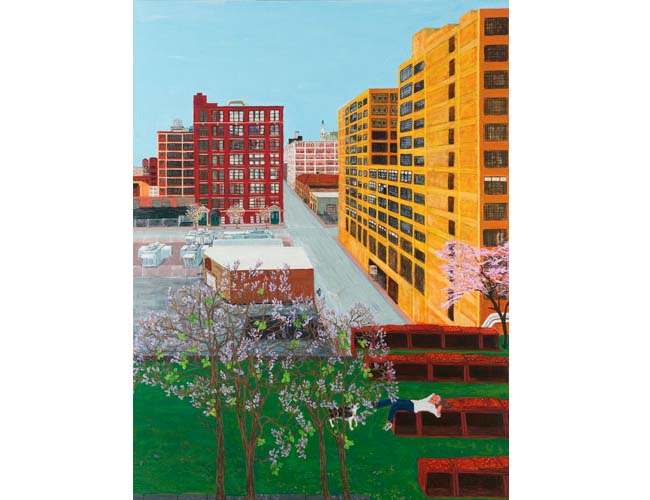 Joseph G. Brin is an architect, fine artist, and writer based in Philadelphia, PA. He launched a pilot program in graphic medicine this year with Dr. Peter Lloyd Jones at The Sidney Kimmel Medical College at Thomas Jefferson University.