As a writer, Sandra Steingraber has the eloquence and urgency of Rachel Carson. As a biologist, she has a fiercely acute perspective on how human health is affected by the many outputs of so many clever human inventions. Her latest book is Raising Elijah: Protecting Our Children in an Age of Environmental Crisis (Da Capo […]

As a writer, Sandra Steingraber has the eloquence and urgency of Rachel Carson. As a biologist, she has a fiercely acute perspective on how human health is affected by the many outputs of so many clever human inventions. Her latest book is Raising Elijah: Protecting Our Children in an Age of Environmental Crisis (Da Capo Press, 2011). In 10 elegantly framed chapters, Steingraber gives both a personal account of a family attempting to live a healthy life in upstate New York and a scientist’s look at the issues that make that so very challenging. The combination is powerful: The litany of facts about hydraulic fracturing, neurotoxins, and ecosystem services would leave readers grasping for hope. But the stories, such as why she uses a blade mower to mow her lawn, provide just that measure of hope.

Steingraber was recently awarded the Heinz Award for her writing on the environment and health. On September 15, she announced that she would donate the $100,000 prize, the entire sum, to devote to the fight against hydrofracking in upstate New York, where she lives with her husband and children. She writes: “Some might look at my small house (with its mismatched furniture) or my small bank accounts (with their absence of a college fund or a retirement plan) and question my priorities. But the bodies of my children are the rearranged molecules of the air, water, and food streaming through them. As their mother, there is no more important investment that I could make right now than to support the fight for the integrity of the ecological system that makes their lives possible. As legal scholar Joseph Guth reminds us, a functioning biosphere is worth everything we have.” (You can see the full statement here.) As the mother of a rambunctious little boy, I asked Steingraber to talk about Raising Elijah.

Kira Gould: In the literature of sustainability, such as it is, there is a leaning toward a culture of fear that turns many people off. Even Al Gore, who compelled many people to action, was using facts to stir up, at some level, fear and alarm about the path our species is on. I am usually more compelled by voices about positive actions than about grim realities, yet I think that you somehow manage to bring the latter to light in a poetic way. I wonder if this is driven by your own personal sense about how to have faith and hope in times like these. Can you talk about fear and hope and how those emotions play into your role in advocacy and speaking?

Sandra Steingraber: The theory of “well-informed futility” tells us that people turn away from knowledge that makes them feel intolerably afraid or guilty, especially if they feel little sense of human agency over the problem.  I prefer not to flinch from the desperateness of our environmental crisis and try instead to counter the overwhelming horror of it all by coaxing my readers towards big acts of heroism.

I think most people know that dutifully carrying their recyclables out the curb isn’t going to keep the ice caps frozen. This is not about small, individual solutions, which are ineffectual to address systematic, structural problems. This is about a new kind of abolitionism, a new kind of civil rights movement. This is about saying, “we are in the middle of an ecological Holocaust, and you can either be a good German, ignoring the signs of atrocity around you, or you can join French Resistance.”  If we see ourselves as a link in a long chain of human rights activists, that helps overcome the despair factor.

On a more personal note, my adoptive mother and I were co-cancer patients together in the late 1970s.  I was 20, and mom was 46.  She had a terrible prognosis.  Her message to me was, “Don’t let them bury you until you are dead.”  Her Churchillian determination continues to animate me.  (That and the fact that she just turned 81.)  Never surrender. I try to inspire and embolden my readers by my actions as well as my words. 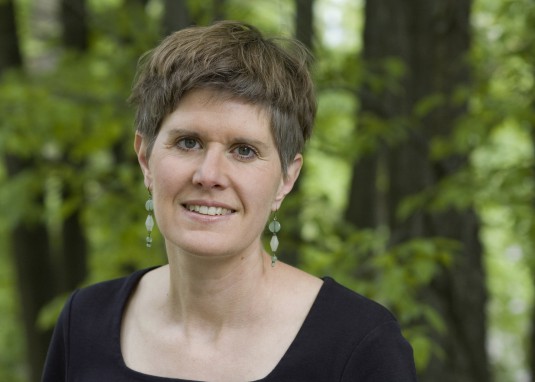 KG: As I was reading your book, Gov. Cuomo rescinded the moratorium on fracking in New York State. Your last chapter addresses this practice and its consequences. Can you provide a brief update of what’s happening on this topic now, in your region? And why isn’t this issue getting more media attention?

SS: In September, the governor released the final version of the environmental impact statement that must precede the permitting of horizontal fracking. It’s a terrible document that does not even attempt to quantify the costs, for example, of the consequences to human health. The public now has 90 days to respond and offer comments. (That sound you hear in the background is the ticking of a clock.)

In my region here in the Finger Lakes, where the economy is based on farming, tourism, wine, and higher education, most people are outraged and disgusted.  Some people, seeing the arrival of fracking as inevitable, are planning to sell their houses and leave the area before the arrival of the tanker trucks and drill rigs and chain saws and backhoes all lead to falling property values. I’ve received several emails from people saying that they were thinking of retiring here but now have changed their minds. The potential exodus of the professional classes in rural upstate New York is a huge untold story.

Others unable to leave or less willing to take a fatalistic view–and I place myself here–are organizing to fight. They see themselves as part of a larger resistance movement that seeks to halt the rush toward extreme fossil fuel extraction in all its forms:  blowing up mountains to get at coal, constructing pipelines for tar sands, and blowing up our very bedrock to get at natural gas. With enough citizen opposition, it is not inevitable that fracking will come to New York State. I truly believe this.

Meanwhile, there are lots of public educational forums every day. This week, for example, I debated a pro-gas attorney at a chamber of commerce meeting in Skaneateles and spoke in a high school auditorium in Hammondsport. And there are lots of townships passing resolutions banning fracking at the local level–my own town is among them–and there are now lawsuits being filed against those resolutions.  So, basically, passions are running very high here. Organic farmers, of course, have the most to lose, and they are among the most angry. One of my neighbors—a great grandfather—says he is willing to lie down in front of the trucks.

As for the lack of media attention: I don’t get it either. Perhaps it has something to do with the fact that fracking is happening mainly in rural areas, which are not big media centers.  As far as I can see though, fracking is the environmental human rights issue of our time.  Across the nation, it is shredding the natural environment, industrializing farmlands, releasing into air and water some of the most noxious chemicals we know about. This summer I traveled across the United States, through 20 states, on an exploratory research trip to investigate fracking. Everywhere I went, I saw signs of human and environmental devastation. This is an epic, Grapes of Wrath-style story.

KG: I am constantly confused (more so now that I am a parent, I confess) why our species seems unable to apply the precautionary principle when it’s clear that would be best for human health, given the limits of what we know and can control. Any thoughts on this? Profit seems such a shallow motive in its place… but then the way our society is structured allows us to endlessly privatize profit and socialize risk, so perhaps that structure alone will never allow the ascendancy of the precautionary principle.

SS: I do think the problem is structural. The precautionary principle makes eminent sense to every parent of small children who reflexively practice precaution every day in their own homes. We strap on bike helmets and vet birthday party goody bags for choke-able objects. But our environmental regulatory apparatus is based on risk-benefit analysis, not precaution, and allows economic benefits to manufacturers to be balanced against, say, the healthy lung and brain development of children. This allows the Obama administration to strike down the EPA’s proposed new limits on smog—which we know is related to preterm birth, asthma, and learning problems in children—on the (false) grounds that it will hurt businesses. Of course, on a social level, this makes no economic sense as the chronic diseases and disorders of children add rocks to our health care costs and fuel the need for more expensive special education interventions in our public schools.

And, of course, fracking is the poster child for the private profit/ socialized risks model of doing things. The risks–such as human health problems due to chemical exposure and increased flooding due to loss of wetlands and shredded forests–are not as quantifiable as the so-called benefits (jobs and increased revenue). The identity of landowners who will make money leasing their property to the gas companies is knowable and quantifiable. The identity of pregnant women who will lose their babies to miscarriages triggered by chemical exposure, the identity of children who became asthmatic from fracking-induced air pollution:  at the individual level, these are unknowable data.  But they exist.

Kira Gould is a writer and director of communications with William McDonough + Partners. She is also co-author of Women in Green: Voices of Sustainable Design (Ecotone Publishing, 2007).