A wrap-up of the 2014 PSFK Conference

The year’s PSFK conference began, of all things, with a retelling of the contemporary children’s classic Mike Mulligan and His Steam Shovel. The future was bleak for the book’s eponymous steam-powered apparatus, Mary Anne, before she and her operator, Mike, were commissioned to lay the foundation for the town hall of Popperville. After some difficulties, the pit was dug, the foundation laid, the building finished; the poignant story comes to a close with the town bursting with pride over their beautiful new town center. “It’s the ‘Mike Mulligan effect’,” said Marc Kushner, architect and co-founder of HWKN and Architizer. His message: architecture is as much about things like math and zoning, about form and function, as it is about generating emotion.

Twenty minutes later, horologist Scott Thrift shifted gears with his 365-day clock, which showed the audience what a year feels like when we’re not counting each minute. Later, Billie Whitehouse of wearable tech company We:eX demoed sports jerseys that tingled with vibrations corresponding to televised tackles, goals, and game-winning shots. These talks and more formed the program for the 2014 PSFK conference, a day full of fireside chats and PechaKucha-speed keynotes from a group of lecturers handpicked by PSFK’s Piers Fawkes and Dory Carr-Harris and their editorial team.

Much of the conference, which took place April 11th at the Museum of Jewish Heritage in Lower Manhattan, centered on progressive technology, and how technological advances are changing the way we relate to one another. The diverse presentations were collected under this year’s rubric, “Connecting the Unexpected,” a feat easier than done.

Despite this, the talks were enjoyable on their own. Videogame advocate and journalist Jamin Warren spoke about his confusion when, as a reporter of culture to the Wall Street Journal, he was unable to get through to his editorial superiors the cultural significance of videogames. They had become recreational, artistic, and educational touchstones of popular culture, he argued in vain. Jamin then founded Kill Screen to bring videogames to a wide audience; he cited his own Two5Six conference last year where Oculus Rift founder Palmer Luckey presented his soon-to-be-viral video wherein users could, via a virtual reality device, experience a guillotine beheading straight from the Reign of Terror. 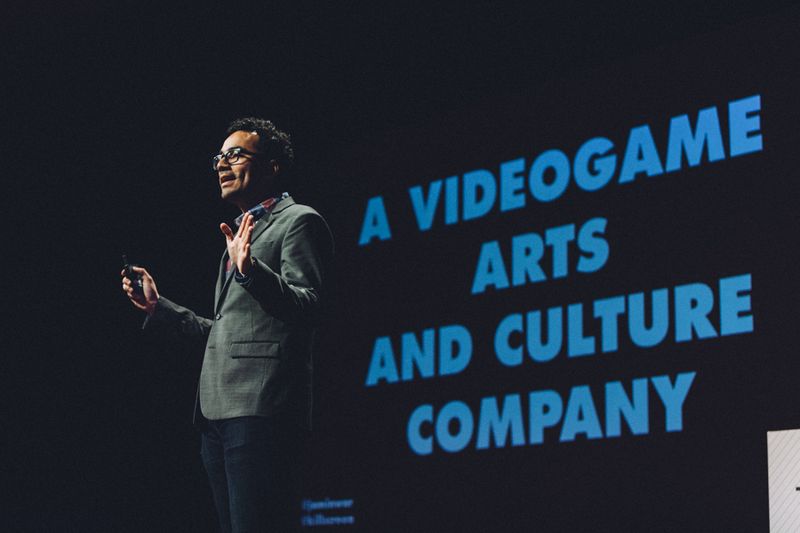 Retailer Abe Burmeister had his come-to-jesus moment when, after founding mens activewear brand Outlier, he was told he could get away with selling anything—exactly what he didn’t want. He realized that marketing wasn’t such a bad thing, that is, if it’s used in an honest and direct way; an important idea for an online-only retail brand. In a colorful anecdote—the kind of which would punctuate each of the day’s presentations—Burmeister recalled how he had spent a year trying to find pants that were tailored but also were tough enough to withstand a biker’s daily commute. Without a solution, he founded Outlier and engineered the pants himself.

The conference took a decidedly different, more tactile tone when food designer Emilie Baltz took the stage. She presented her interactive project Lickestra, which compelled guests to make cacophonous music while licking cones of ice cream. Licking also played a central role in another project, which asked different chefs to design experimental cocktails. (One cocktail consisted of a visous sake solution spooned onto a table that was to be licked off by adventurours tasters.) 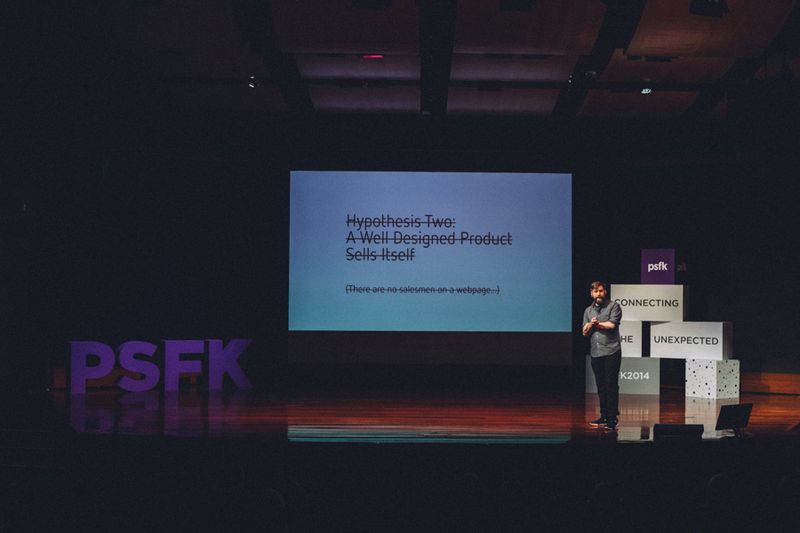 Abe Burmeister of Outlier takes the stage for his presentation.

The day’s final presenation was delivered by YouTube Trend Tracker Kevin Alloca, who explained that the video service’s success was based on “a bored-at-work audience that was desperate for human connection.” It seemed that each of the speakers had come from a similar place, and that each of their journeys to success had been one that had first come from something missing; a place where architects could commune, a feeling that time wasn’t on your side, or that your pants wouldn’t last today’s commute. All hit on a solution that, on the one hand, connected to those individual needs, and on the other, spoke to more ambitious goals of make the future just a little bit brighter.