Q&A: David Finkel, On How Davis & Warshow Is Going Green

A Davis & Warshow business exec talks about his firm’s steady progress toward net zero, while improving employees’ quality of life.

Each year, since 2008, Metropolis has been collaborating with the folks at Davis & Warshow, to bring news from Greenbuild to the New York City design community. These lively, informative, popular events focus on the most current topic top of mind at the USGBC, the conference and tradeshow organizers. This year there was a lot of talk in Philadelphia, where Greenbuild settled into the Pennsylvania Convention Center for three days in November, about health, wellness, and green building. I, along with a panel of LEED architects, will be expanding on these issues at the Public Health and Wellness event on Wednesday, December 11, to be held at the Davis & Warshow SOHO Flagship.

Each year, too, I learned about some new move that Davis & Warshow just initiated in their steady progress to “green” the company. Now, with a critical number of programs in place, I decided to ask David Finkel, the Ferguson Enterprises New York Metro business group manager for showrooms/builder sales, to give us a report on how they’re doing. Here he tells us what a small business can do to make our world better, cleaner, healthier.

Susan S. Szenasy: Back in 2008 you famously said: “There is no way to flip a switch and be carbon neutral over night. However, we know that when we combine all of the manageable things we will have meaningful impact.” In the five years since you made that realistic, but hopeful statement, what have you identified as “manageable things” within a company like Davis & Warshow? Can you give a list of them starting with the very first thing you identified back then?

David Finkel: While Davis & Warshow had done some very forward-thinking things like installing motion detectors on lights in the warehouse, there were some obvious things we needed to work on. Handling our recycling better was one major area, but now the company has color-coded bins in all of our locations, with desk trash bins used for paper waste only. Not only have we improved recycling dramatically, we have eliminated sources of odor and pests. Then, we made the simple decision that all paper used at Davis & Warshow would be 100% recycled whenever possible and extended that to our letterhead, business cards, and other materials.

Our next target was fuel consumption. If you peeked out the office window into the parking lot, there were SUVs as far as the eye could see. So we implemented a 20MPG City minimum fuel requirement so that anyone with a company fuel subsidy whose vehicle did not meet the standard would have to pay a proportionate share of his or her fuel bill. For example, if an employee’s vehicle rated 18MPG City, they were only allowed to expense 90% of their fuel cost. While there was some grumbling, people quickly came to appreciate driving a more efficient vehicle, and our fuel bills dropped by more than 40%! We also held a raffle in which employees earned entries by taking mass transit or carpooling. Prizes in quarterly and annual drawings for these raffles included iPods, televisions, and cash prizes. 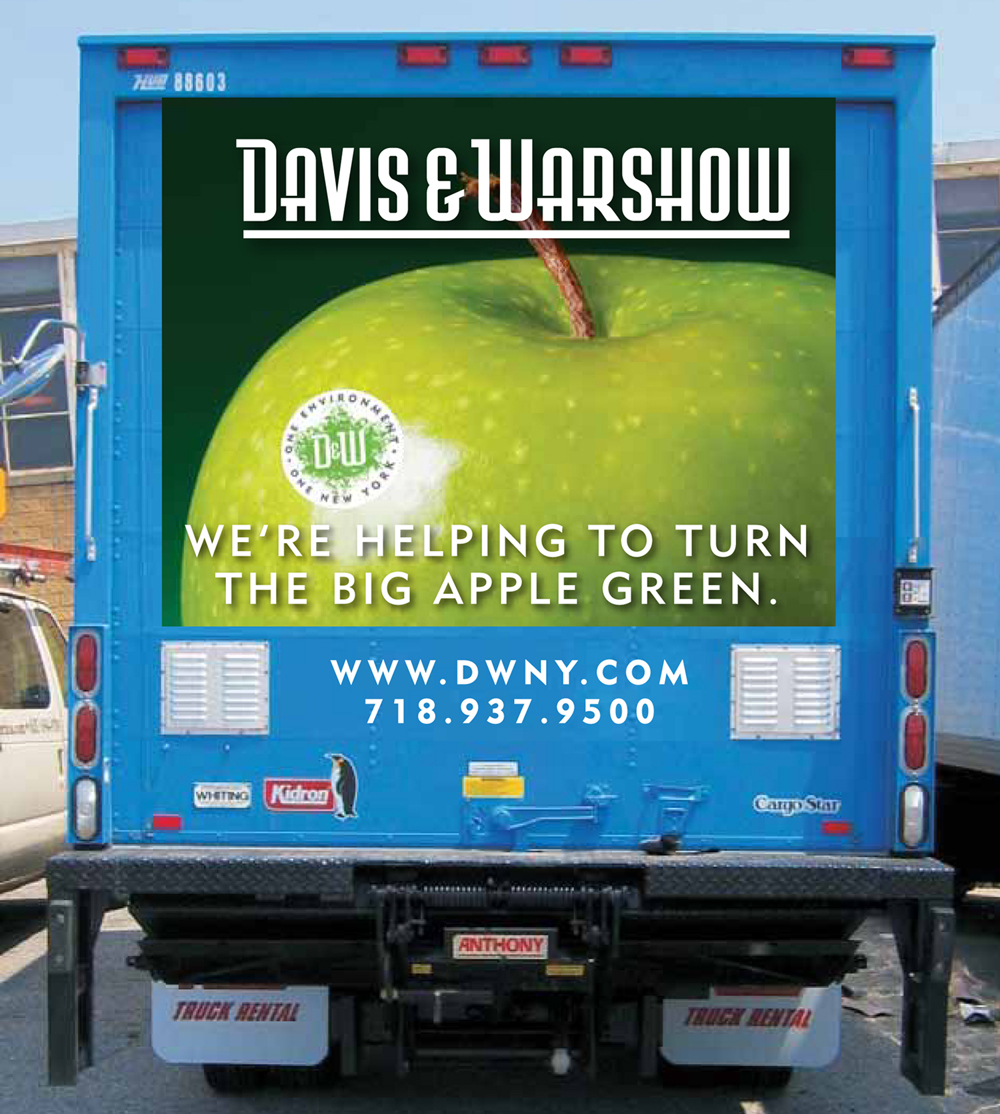 Last year, the company was awarded by the Urban Green Council for their efforts to “go green.”

SSS: In the ensuing five years, what are some new “manageable things” that have cropped up, as you continue to watch the company’s environmental footprint?

DF: Once we tackled low-cost, behavioral activities, we got more aggressive and began looking into solar panels for the roof at our Maspeth, Queens distribution center. In 2011 we powered on what was, at the time, NYC’s largest private solar array. A year later we began installing LED tubes as a retrofit for our warehouse, which had been completely outfitted in fluorescent lighting. Our warehouse lighting is now considered “net zero” with the solar panels producing more energy in one year than the LEDs require to light the facility.

In 2012, Davis & Warshow was acquired by Ferguson Enterprises, Inc. which has provided further benefits to employees in terms of sustainability and wellness. Like Davis & Warshow, Ferguson had already added incentives—including fuel subsidies—to get employees into more efficient vehicles. Ferguson has already launched an employee contest for the best green ideas, and they are considering rooftop or ground level gardens at many locations based on one of the employee suggestions. Ferguson employs approximately 19,000 people, and perhaps a few of Davis & Warshow’s changes can trickle up and make an impact across the company.

SSS:  As you mentioned, in 2011 Davis & Warshow put in place one of New York City’s largest private-sector solar installations on your headquarters in Queens. Since the PVs have been operational, what kinds of energy savings have you realized? And when will your investment start to pay for itself?

DF: When looking at the payback of large-scale solar arrays, we are still heavily dependent on the subsidies provided by New York State, the Federal Government, and local energy providers. When all of those benefits are incorporated into the calculations, the payback is approximately 4 years. Unfortunately, we had a bit of an issue with Sandy and were cut off from the grid for 14 weeks. Then, the array was down for another couple of months due to a part failure (the system wasn’t designed to be submerged under saltwater!), so we’re going to need some extra time to recapture some of the cost. As far as production, we have generated over 760,000 kWh since going live.

DF: By selecting Davis & Warshow for the award in 2012, I think the Urban Green Council was sending a message that while many of the large companies involved with the USGBC are doing massive projects that dwarf the impact we are having, the smaller, less high profile work that we were doing was more relatable to smaller businesses. The audience was comprised of green leaders, who know as much or more about green practices as anyone, but seeing Davis & Warshow as an example of a small company making environmentally and economically sensible changes showed them that there is huge potential in small steps across a vast existing infrastructure.

In fact, two of our neighbors here in Maspeth have installed solar arrays, one of which is even larger than ours. In this case, we’re quite happy to be in second place, knowing that our efforts have impacted and inspired the community.

SSS: Davis & Warshow has worked with Metropolis since 2008 on annual programs to share what we learned at Greenbuild with the New York design community. This year our topic is Health, Wellness, and Green Building–the next big subject in the environmental movement. How are you thinking about health and wellness and your commitment to “going green?”

DF: Part of “Practically Green” was a review of the indoor environment at our main office. We found that our oxygen levels were extremely low, which impacts health and productivity. As a result, we revamped the HVAC system to accommodate the number of people and machines in the office, and we are all much more comfortable. In April 2012, we held a company-wide Health Fair with subsidized heart scans, cholesterol and glucose tests, nutritionists, acupuncturists, masseurs, etc. Last year we joined a CSA and had about a dozen people sign up for a weekly vegetable share. Also, now that Davis & Warshow has been acquired by Ferguson, many of us have taken advantage of the many programs that they offer in regards to wellness, including gym membership subsidies and pedometers that allow you to earn cash based on your physical activity.