The Refill Odyssey: The Search for Eco-Friendly Refill Stations in NYC

Our intrepid correspondent searches in Brooklyn and elsewhere for places to refill the over-abundance of plastic bottles, with spotty success

“The pump is the critical part,” says Sacha Dunn, a co-founder of the burgeoning new line of natural cleaning products, “Common Good.” She was speaking of the refill stations, now to be found in more than 20 retail outlets in NYC and 50 stores nationwide, which allow Common Good customers to refill the plastic bottles of plant-based fluid cleaner at the point of purchase.

This feel-good-about-yourself refill-station is only a fraction—one-fifth, to be exact— of the business that keeps the Brooklyn-based company expanding, but it may become critical to a brand of all natural cleaning products in an increasingly cluttered market. Denizens of “who-cares-about-the-price-tag” boutique groceries and household specialty shops might already have trouble choosing among “Method,” “Mrs. Meyer,” “Earth Friendly,” “Seventh Generation,” and “EcoCover,” to name the ecologically correct brands that come readily to mind.

A host of other new locally sourced, sometimes home-brewed, biodegradable-cleaning agents are sprouting up wherever next-to-godly urbanites dwell. With names like “Dave,” “Steve,” and “Kevin,” the soaps could have been concocted by the guy next door who you thought was growing weed on the fire escape (It’s lemon verbena, stupid).

Some corporate titans of clean, like Colgate-Palmolive and Clorox, have clearly jumped on the “green” bandwagon, and offer a line of products free of “unnecessary chemicals” and “heavy fragrances,” to supermarket shoppers. Even “Seventh Generation,” the mother of all eco-conscious brands, has become a staple of the detergent aisle in such supermarket chains as Key Food, Safeway, and Stop ‘n’ Shop.

So while there is no shortage of soaps out there to keep our homes and consciences clean, the environment-friendly manufacturers have not addressed the plastic glut their products generate, with the obvious solution (obvious to me and a bunch of other cranky women I’ve met in the blogosphere). However they might boost the concentration level of the fluids (add the water at home) or increase the bio-synthetic, recycled content of the plastic containers, the purveyors of save-the-planet household cleaners have not embraced the idea of a dispensary where you can refill your bottle of wild geranium-scented All-Purpose Cleaner or hand-crafted bergamot carpet shampoo.

According to Dunn, such stations draw customers to the stores that provide them, and where the product being refilled is one of the four liquid cleaners currently offered by Common Good—all-purpose, hand-, dishwashing-, and laundry—to the brand itself.

Naturally, a less than pleasant experience watching a viscous liquid slowly ooze into a reusable glass bottle will reflect badly on the brand. Hence, the worldwide search for the perfect pump to keep Common Good product—and customers–in the flow. Dunn won’t divulge any details of the design of the Common Good pump, for the simple reason that it works exceedingly well.

Despite the successful grail-like quest for the pump, the company sees the refill idea mainly as a way to drive up demand for the Common Good product, which is now adding glass, floor, and bathroom cleaners to its homecare lineup. In other words, the refill station is essentially a marketing device. But never mind the motive, I was eager to see how—and where it works, so I took myself to the hub of hip, my native borough, Brooklyn.

First stop was Green in BKLYN, a home-goods store on Myrtle Avenue straddling the stately neighborhood of Fort Greene—home of Hollywood stars and Pratt Institute–and Bedford-Stuyvesant—the newest outpost of Bobos priced out of the Slope. Like many of Brooklyn’s independently owned stores, Green in BKLYN, which stocks only locally produced ware, trades on the customer’s nostalgic yearning for the purity and simplicity of an idealized childhood, most likely spent in the burbs. Indeed, in addition to real estate lust, the Brooklyn Renaissance is at least partly driven by the primal craving for a mythical urban idyll, where the air is free of pollution and the mâche (bien sûr, biologique) is always locally sourced and fresh. I am guilty of buying into that mystique, despite its being way outside of my price range.

The Green in BKLYN refill station is just a few unprepossessing metal shelves stocked with small bottles of Common Good soaps and large canisters of the brand’s four elements—all-purpose, dish, hand and laundry—crowned by gleaming white plastic pumps. In addition, there are empty glass bottles—reminiscent of apothecary bottles of yesteryear— which customers can buy and fill, bypassing the plastic bottles altogether. The gleaming display of bottles and soap containers, each labeled with line drawings identifying its contents (clothes pins for laundry, a chair for all-purpose, a drinking glass for dish, and bathtub brimming with bubbles for hand-soap) looks like the Martha Stewart reinvention of a janitor supply closet. It is worth noting that both Dunn, who did the artwork on the labels, and her Common Good co-founder, were prop designers in the movie industry before turning to soap.

It is also noteworthy that a new Brooklyn brand of organic household cleaner, Haven, stands shoulder to shoulder with Common Good products on the Green in BKLYN shelf.

The next stop was Foragers Market in Dumbo, an urban foodie’s paradise. Bags of organic potting soil and Brooklyn-Blend organic compost placed strategically in the front of the store seemed to proclaim: “Put one of these in your cart and everyone will know you have premium outdoor space.”  One thing I’ve noticed about these rarified food stores is how artfully they balance surfeit, diversity, and understatement. Somehow that tasteful mountain of mushrooms in the produce section manages to convey to the passing customer that it contains a dozen or so varieties of fungi, all biodynamically cultivated in a retrofitted harness factory in Gowanus.

The Foragers Common Good refill station—a larger version of the installation at Green in BKLYN—was actually being used when I found my way to it through a maze of artisan-crafted bread, micro-brewed beer, and Brooklyn-roasted shade-grown coffee beans. The person filling his bottle of dish soap seemed to be in the groove of the experience, so I didn’t have to ask him if the pump was working for him. 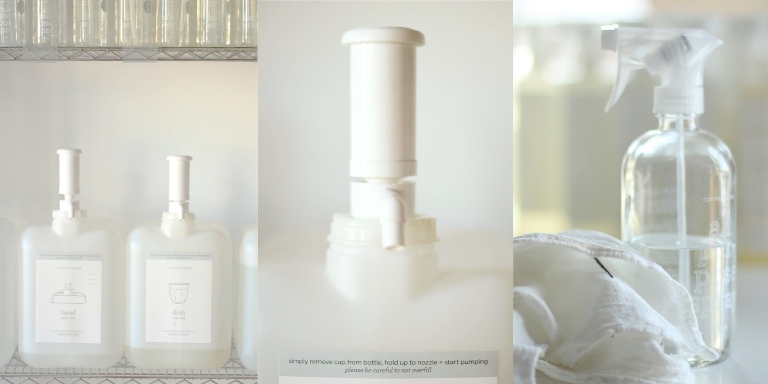 My third stop on the trail of the elusive perfect refill station was in the Bowery, at the flagship store of the Brooklyn-based Green Depot. As its name suggests, it is the earth-friendly antidote to the hardware behemoth Home Depot, and buying their non-toxic, chemical-free, low carbon-impact alternatives to the VOC-, formaldehyde- and phthalate- emitting merchandise of the big-box store makes me feel like I’ve just scored for the home team. Disclosure: I am a fan of insulation made from recycled jeans, among other products I’ve bought at greendepot.com.

The Green Depot in the Bowery is one of three retail stores (out of the 10) that has a refill station—the others are in Seattle and Portland, OR. I expected the flagship would have a top-of-the-line installation, and was disappointed to see a much more modest setup. A sales person kept guard over the station, and when I walked up to it, he told me I could not try it out, or even make a closer inspection. Only a Green Depot employee, he said, is authorized to fill the containers.  Of course, Green Depot uses a highly concentrated solution of its all-natural products, and naturally all of them are made in Brooklyn, but I was miffed enough by the hands-off policy to call GD’s head of PR in Seattle the next day. She did not say that the Bowery refill station was only a pilot project being tested in New York, and that Green Depot would soon be mounting a nationwide refill campaign—which is what I wanted her to say.

However, she did tell me about a brand new app for finding groceries sold in bulk.

A visit to friends in the Berkshires brought me to the last stop on the refill pilgrimage: the Berkshire Co-op Market in Great Barrington, MA. Refill dispensaries for olive oil and botanical body lotions, among other essential fluids, dotted the supermarket sized Co-op, and the store boasted a remarkably large and diverse section of bulk dry food. As I looked around for the soap refill station, my expectations mounted. What I found, though, shook my faith in the whole refill enterprise.

In this emporium where summering UWS academics and psychotherapists cruise the aisles of locally grazed beef and hand-churned goat butter alongside resident organic farmers, hard-cider brewers and alpaca herders (many of whom, I suspect, are second-career refuges from the city), where you’d expect a high commitment to preserving our planet’s precious resources, was the saddest of refill stations: a few canisters of household soap relegated to a small recess at the back of the store—a forlorn afterthought that only the most zealous, compulsive friend of the environment would bother to hunt down. To reinforce the message of neglect, the plastic magnum of Dr. Bonners was DIRTY and the clogged tap evidently had flow issues.

Before I had started to pound the pavement in my quest for a workable refill system, I thought of its most likely innovator in the field: the Park Slope Food Coop. Unable to enter the store without a membership card, I randomly stopped a “volunteer” on Union Street as he was pushing a line of shopping carts back to the home dock. (The PSFC reputation for rigid regulation and self-righteous smugness was sealed by Sacha Baron Cohen in “The Dictator,” but if you think he was exaggerating, check out the PSFC website).

“Surely, the Park Slope Coop, has a facility for refilling plastic bottles of laundry detergent and liquid soap,” I asked the shopping cart drone. He looked quizzically as I rephrased the question, before he said, “No, there’s nothing like that there.” As if to reclaim the honor of the establishment to which he must devote 2 hours and 45 minutes of labor every four weeks, he added, “But, we do have vats for refilling bottles of olive oil.”

“Even Fairway has that,” I said, making a mental note not to call the Coop manager, for what I was sure would be a four-hour harangue on why, after many years of deliberation, the Board of Directors had decided to shelve the idea of a soap refill station.

Maybe after all those imagined years of considering that simple solution to the plastic bottle glut, the Coop Board was onto something, I thought to myself as I stood looking at the pathetic arrangement of plastic bottles in the Berkshire co-op.

Then I remembered the discouraging words of Sacha Dunn, when I asked her about Common Good’s plans to expand the refill operation: “It’s very hard to change people’s behavior.”