The Responsibility of Architects is to Craft Collective Experiences

Design has the potential to shape the memories of millions. 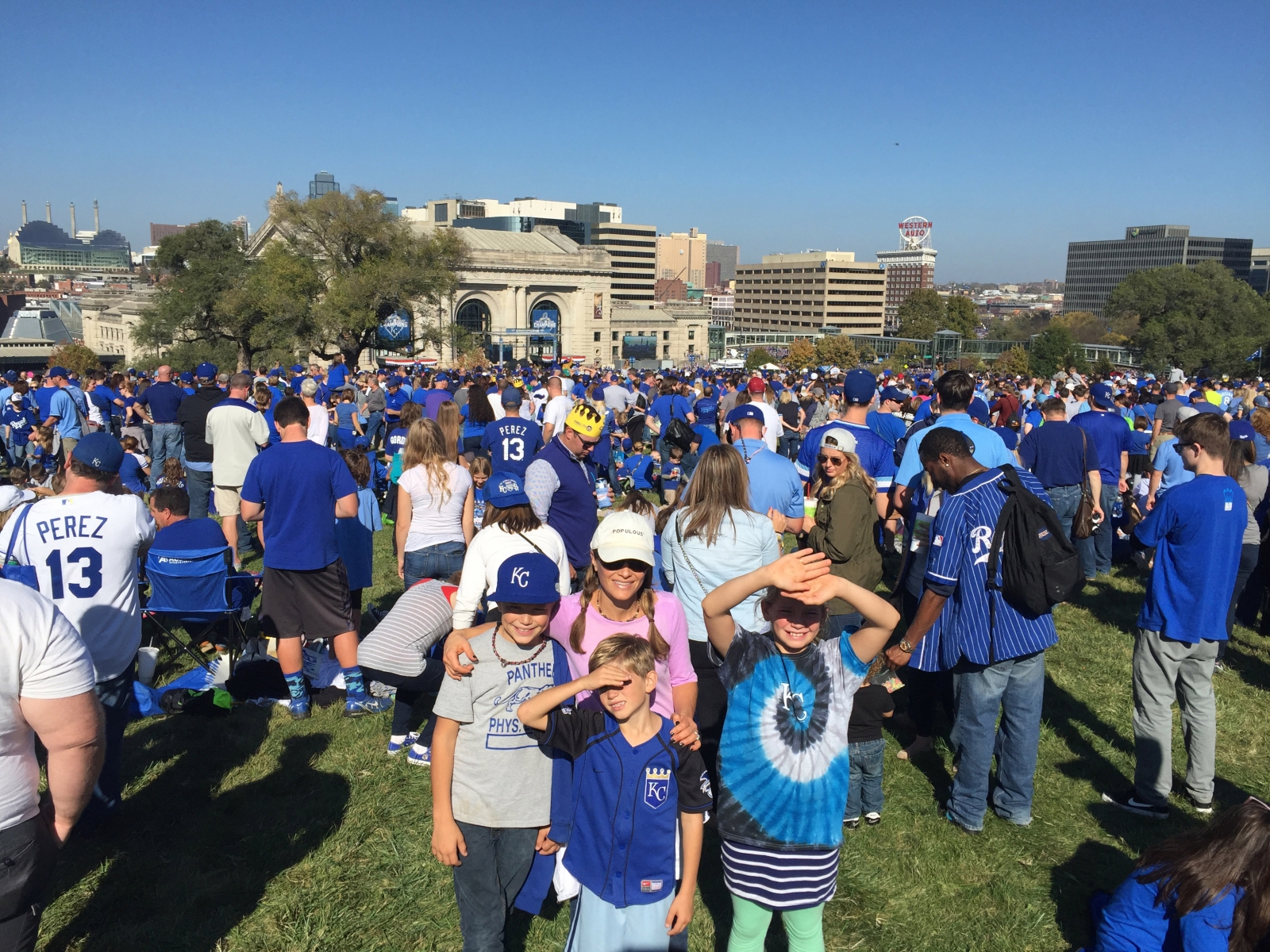 Michael Lockwood’s wife Heidi and their children Marshall, River, and Chloe at the World Series victory celebration in Kansas City.

Kansas City celebrated the Royals’ World Series victory on November 3. As blue-clad fans congregated downtown, we gathered around the bleachers at Populous, the architecture firm known for building massive sports arenas, convention centers, and airports. Hunter Douglas Architectural Products brought together the participants for this special edition of Think Tank (the Metropolis CEU-accredited program that took me to 27 U.S. architecture offices this year; about the same number is planned for 2016). We focused on “anchor buildings” and their potential as vital urban spaces that connect local neighbors with outside visitors; provide opportunities for robust programming such as school activities, entertainment, and art installations; as well as make room for the development of services, parks, playgrounds, and retail stores.

As the festivities kicked into high gear, we were on our way to the airport. I wanted to know what it was like to be in the activated space at the heart of the city. Populous architect Michael Lockwood, who lives in a walkable neighborhood a mile from his office, later shared the moment with me:

“A few minutes after leaving our conversation I was at my house rallying my wife and three kids to go to the parade. Our neighborhood was filling up with cars as people were parking anywhere in midtown to walk to the parade [attendance was estimated at 800,000 with only three arrests reported; the population of Kansas City proper is 471,000]. I convinced the family that our bikes would get us in and out a bit quicker than walking. As we rode we observed that everyone was in a terrific mood and very helpful with moving through the crowds.

“Our responsibility as architects is to craft collective experiences that shape the memories of millions.”
“We parked our bikes atop Liberty Memorial—the national World War I memorial that has a tremendous urban presence in our city. Atop a small hill, the memorial overlooks the downtown core with Union Station at the bottom of a large sloping grass field in the foreground. It is a beautiful setting when nobody is around, and it was an amazing setting with a massive crowd gathered there. During our Think Tank discussion I thought often about the unique programmatic requirements we face at Populous—we design ‘rooms’ for over 100,000 people, our intimate arenas can host over 20,000 people—unique design challenges from a technical point of view. But the magic created when thousands of people gather for a common purpose is almost impossible to describe. There is something primal about it. The sheer volume of humanity creates gravity unto itself. People want to go because people are going. It’s something you have to see.

“I observed, most of all, that people were happy. Happy to be off work, happy that the sun was shining in November, happy that the Royals won, but perhaps most happy that no one else in the world could celebrate a World Series title. So many cities in America want to have something no one else has—a charming quality, a landmark, a distinct culture, and great food. For us, it was easy for everyone involved to know that we were the only city in the world celebrating a world championship. My kids will remember the day for the rest of their lives.

“The ‘anchor buildings’ that supported our unique experience that day—Union Station, the Sprint Center, the Kauffman Center for the Performing Arts—are adequately spaced to allow the city to ‘happen’ among them: entertainment districts, residential buildings, arts districts, civic precincts.

“Kansas City has a wonderful urban fabric that is coming alive again. It is our job as designers of these facilities to understand what the architecture must do to promote this type of experience in every city where we work. But our responsibility is so much larger than the buildings we design; it’s to craft collective experiences that shape the memories of millions.”