Melting city ice with sodium chloride has a toxic impact on nearby plants. Are there safer ways to melt the snow?

Calcium chloride scattered on the Dekalb Avenue sidewalk in downtown Brooklyn after a light snowfall.

​In our last post, we spoke about the important role of arborists in the design and construction process. In this article, we turn our attention to the impacts of road salt on our urban landscape.

Now that the season of snow plowing and shoveling is well underway, we find ourselves thinking about the impact that snow removal and the use of road salt has on our landscapes. Applied throughout the winter months in New York City, road salt and its application is managed by a variety of state, city, and private entities. The New York State Department of Transportation, which maintains state highways, spread 1,048,760 tons of salt on state roads in winter 2013-2014. Most of this salt is the same molecule as table salt—sodium chloride—but in much larger crystals referred to as rock salt, which is typically mixed with sand. This mixture increases winter road safety, melting ice and providing needed friction on slippery surfaces, but its application also produces a number of negative side effects, including a very toxic impact on plant life adjacent to roadways.

When mixed with water, the sodium chloride in road salt dissolves into sodium and chloride ions, both of which are toxic to plants in high doses. These ions replace other nutrients in soil that plants need to survive. Additionally, the salt’s high water absorbency robs plant roots of the water required for their sustenance. The roots further absorb chloride ions, transporting them to leaves and interfering with photosynthesis. All of these effects combine to create a deadly cocktail for most plants.

New York City’s Department of Sanitation uses a mixture of rock salt and calcium chloride, another deicing salt that typically comes in little white pellets, for sidewalks. This salt causes less damage to plants but is far more expensive and complicated to both store and apply, resulting in its more limited use in municipal applications.

Plants that tolerate high salt levels in soils are called “halophytic” (salt loving). These plants typically originate from coastal or estuarine ecosystems where they are routinely exposed to salty soils. It is important to note that a plant’s tolerance of high levels of salt in the soil should not be confused with resistance to leaf damage from salt spray. The USDA defines plants with high salinity tolerance as having only a slight reduction (less than 10%) in plant growth with salt levels up to 8.0 decisiemens per meter—a measurement that describes the soil’s ability to conduct electricity as a result of dissolved salt ions. Our firm regularly specifies salt tolerant species in projects that are prone to salt exposure in the soil, either from seasonal road salt runoff or shoreline inundations. Salt tolerant species lists for the New York area are available from a variety of sources, including the NYC Department of Parks and Recreation. These lists are derived through consideration of a number of different conditions, and should be used as a guide only, with other considerations factored into plant selection as well. Published lists do not always note if tolerance measured is for soil salinity or for salt spray. One of the lessons learned from Hurricane Sandy is that many plants previously thought to be salt tolerant did not survive the storm’s inundations. What we do know is that planting within well-drained, sand-based soils facilitates the flushing of salt from the soil. 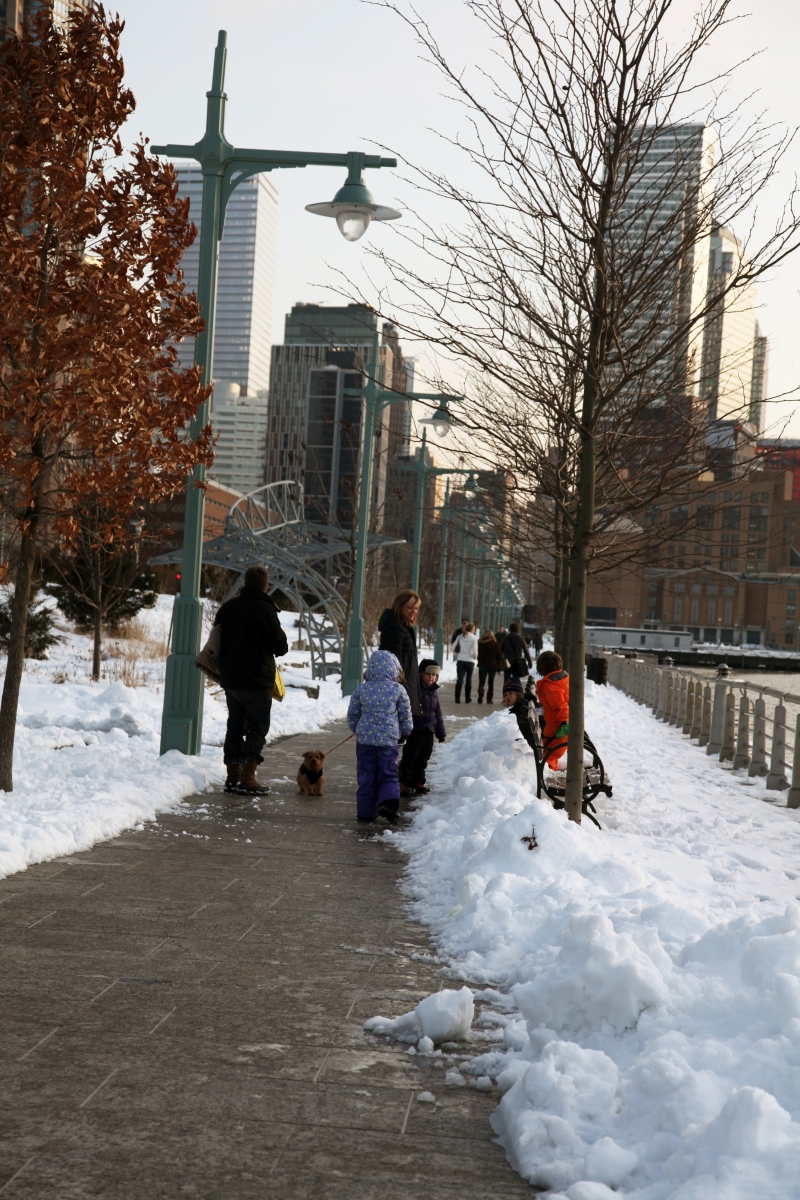 Maintenance is key for any sidewalk or streetscape planting. Stockpiling plowed snow in planted areas is a recipe for salt damage. Snow should be stored away from sensitive planting. Irrigating planted areas with a flush of fresh water once the weather permits is a good way to dilute salt concentrations in affected areas. In Manhattan’s Battery Park City, where a premium is placed on ecological horticultural practices, planted areas are flushed with water during the late winter/early spring to assist in the removal of salt from the soils as part of the regular irrigation schedule. An extended length of water release allows for deep infiltration and salt removal. The  West Thames Park and restored Rockefeller Park plantings designed by our firm are sustained in this way, and plants exposed to salt infiltration have survived many winters as well as Hurricane Sandy using this maintenance regime. 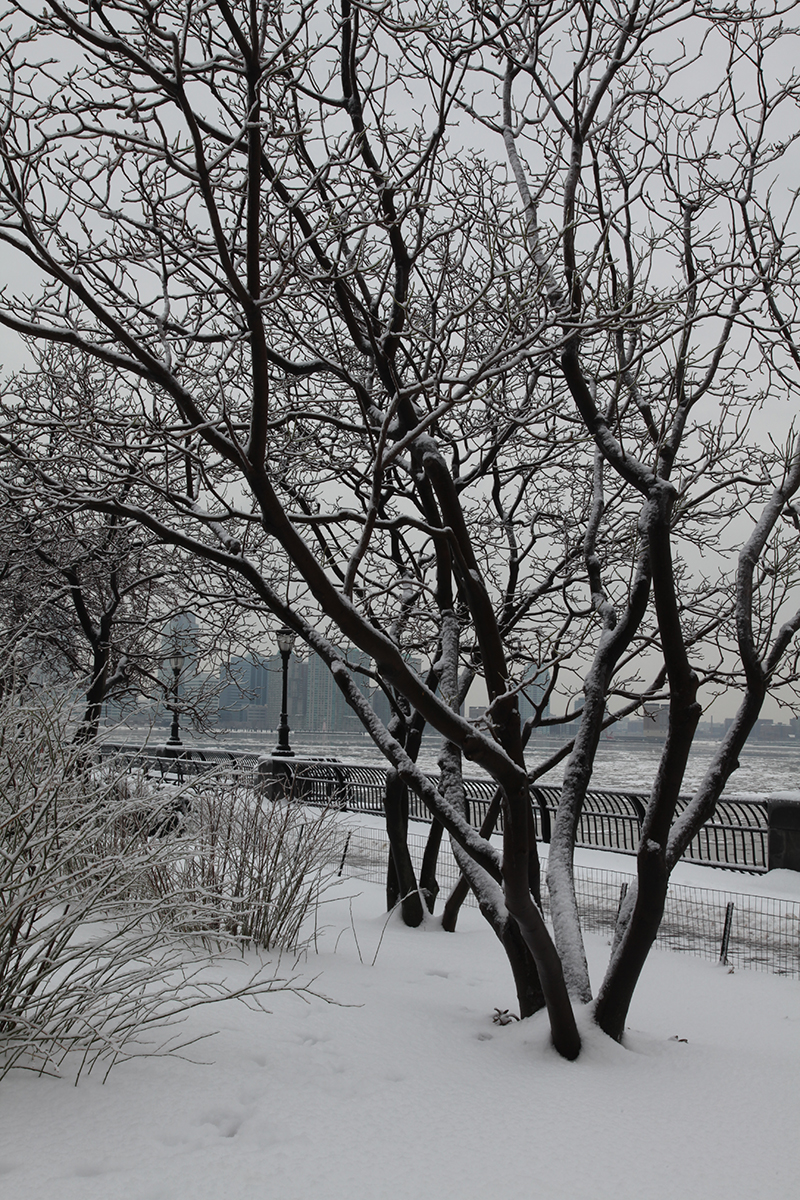 Of course, the best solution for plants would be to reduce salt use. Even salt tolerant species can be overwhelmed by excessive exposure, and the larger ecosystem implications of planting coastal plants along inland roadways are unclear. A number of cities nationwide are taking innovative measures to this effect, even exploring the use of food waste brine products as alternate road deicers. Wisconsin, for example, has tested the use of cheese brine! The brine, which is a saltwater mixture, allows for reduced salt application because it does not spread off of the roadway as quickly as rock salt. Additionally, scientists at the Center for Environmentally Sustainable Transportation in Cold Climates are studying paving treatments that create a surface barrier that prevents ice from forming. Now, that would be cool.

Ilana Cohen is a Landscape Architect at Mathews Nielsen Landscape Architects in New York City. After receiving her MLA from Harvard University in 2010, Ilana worked in Paris on design and planning projects worldwide before returning to her hometown of New York.

This is one in a series of Metropolis blogs, written from within the practice by members of Mathews Nielsen Landscape Architects’ Green Team, which focuses on research as the groundswell of effective landscape design and implementation. Addressing the design challenges the Green Team encounters and how it resolves them, the series shares the team’s research in response to project constraints and questions that emerge, revealing their solutions. Along the way, the team also shares its knowledge about plants, geography, stormwater, sustainability, materials, and more.