The way we subconsciously view the world by seeking out patterns and shapes we recognize affects the way we design.

The facade of the Villa Rotunda

We know Palladio’s Villa Rotunda as iconic. A UNESCO World Heritage Site, the 1567 structure in Vicenza, Italy, influenced the creation of a litany of other public and private buildings across Europe and beyond, including The White House. But only recently have we gained insight into why it holds such power and why it won’t abate.

New findings in neuroscience give us a clue. It seems that we see the world like an animal does, which of course, makes sense because we are one. And animals look out on their world in a very specific way, with their brains wired to prioritize processing some objects – the ones most important for survival – first, the face.

While we ‘see’ with our eyes, we process visual input with our gray matter, which as it turns out, arrives pre-loaded to handle critical input. It is believed that all mammals, including humans, have a ‘figural primitive’ in the brain, a pattern with two dots representing eyes, a vertical line representing a nose and a horizontal one for the mouth, at the ready to perceive upright face-like input instantaneously.

We create our worldview via this evolutionary ‘scrim’, or blueprint, subconsciously seeking out faces everywhere, all the time. Our bias for viewing visages even slips over to what we make and revere.

Looking at Palladio’s Rotunda, we might label it a ‘fugue to the face’:

The windows on the second floor suggest eyes, and the portico a nose or mouth; but also the front door behind the columns could represent a mouth, and the windows symmetrical about it, the eyes. And, of course, the pediment over the door frames small ovals for eyes, and a central plaster cameo as a nose or mouth.  And then, there are the faces of all the statuary on the building.

No wonder the villa’s been called ‘eerily perfect’. It fits our subconscious predispositions to a tee. It’s a riff on what we most love to see. 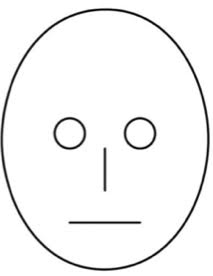 But there’s more. The villa suggests how much our brain favors quick orientation. Faces not only orient us in infancy, but the primal pattern guides us throughout life.

The villa with its bilaterally symmetrical facades with punched windows, anticipates this need, and in so doing, appears to recognize and celebrate our existence. “Yes, I see you!” it calls out.  Or maybe, “Good Day, I’m feeling grand, how about you?”

As a social species, we shouldn’t underestimate how much we crave this relationship and conversation. We have a perennial need for others; these contacts make us feel alive. As The New York Times recently reported, prisoners in solitary confinement begin to feel they don’t exist. In fact, this need to connect is so great that throughout human history we’ve made objects as stand-ins for living things, and ‘reify’ them, or begin to think they are real, to bolster our experience, and aide and abet our survival.

Car manufacturers know people do this with cars all the time, and factor in this predisposition in their front-end designs.

So when we look at buildings that suggest a face, we feel a kinship, maybe a little love, maybe in reunion with an extended family member.

Once you understand the significance of face perception in the human brain, and consider the emotional freight it carries, you will look at the Villa Rotunda, and a host of other buildings around the world, differently (the ‘gingerbread’ cottages in Martha’s Vineyard come to mind). 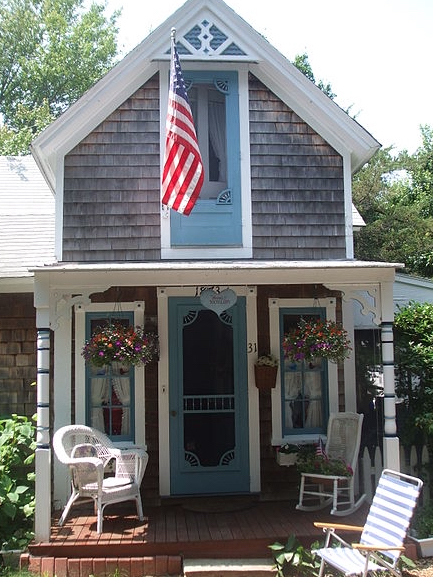 There is a reason these houses keep showing up on post cards and always will. They maintain their popularity despite cultural and technological shifts, their elevations reflect the blueprint already in us. Nobody needs a special education to appreciate these buildings. After all, they reference the pattern we’re all ready to see.

Of course, this does not mean all buildings need to look like they’re from the Renaissance or an island enclave. But it does suggest it’s appropriate to spend time appreciating who we are and how we came to be. “The broader one’s understanding of the human experience, the better design we will have,” Steve Jobs famously quipped. This key idea provided the foundation for his computer company’s stratospheric success. There’s no reason to think it can’t do the same for architecture.

After all, it’s only animal habitat.

Ann Sussman, AIA, is co-author with Justin B. Hollander of Cognitive Architecture,Designing for How We Respond to the Built Environment (Routledge).

Kandel, Eric R. 2012. The Age of Insight: The Quest to Understand the Unconscious in Art, Mind and Brain from Vienna 1900 to the Present. 1st ed. New York: Random House.