Long overshadowed by her colleague and collaborator Le Corbusier, Charlotte Perriand’s designs are being reconsidered at Design Miami.

The legacy of Charlotte Perriand is one of design history’s minor victories. Other women who worked shoulder-to-shoulder with the big men of design—Lilly Reich with Mies van der Rohe, Ray Eames with Charles, and more recently, Denise Scott Brown with Robert Venturi—received equal recognition only with great difficulty, in some cases many years after their death. Perriand, a great modernist designer who worked at Le Corbusier’s studio between 1927 and 1937 before going on to a stellar career of her own, had a comparatively easier path to fame, sparked by a major retrospective in 1985 and publications within her lifetime. This year, there has been a fresh wave of interest in her work, culminating in several events at the ongoing Design Miami fair.

We have Louis Vuitton to thank for the recent popularization of Charlotte Perriand. A few months ago, womenswear director Julie de Libran identified the modernist designer as her muse for the 2014 Spring/Summer collection. (“Her creations were so smart and practical,” de Libran told the Wall Street Journal last month).  At Design Miami, Cassina and Louis Vuitton are paying tribute to Perriand with a limited edition version of the LC4 lounge chair that she designed with Le Corbusier and Pierre Jeanneret in 1928. It’s a fitting choice: Perriand’s contribution to Corbusier’s tubular steel furniture was long ignored, but recent scholarship suggests that she might have had a bigger role than the master architect in developing the LC4. 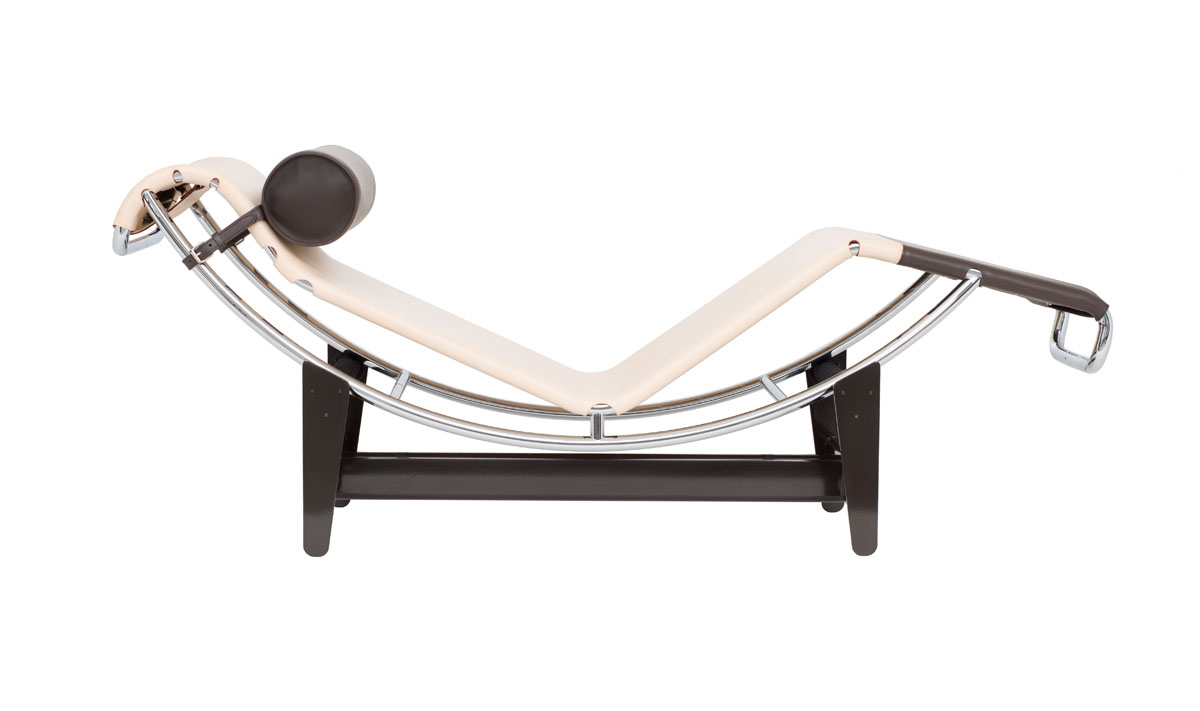 Cassina is issuing the Tribute Edition in a limited run of 1000 pieces.

Also at Miami Beach this week is La Maison Au Bord De L’eau, a beach house that Perriand designed for a competition in 1934, but never actually built. Louis Vuitton has finally constructed the wood-and-steel structure in the backyard of the Raleigh hotel, and filled it with Perriand furniture from the 1930s. After Design Miami, the house, which represents a very early attempt at prefab design, will go on sale.

Paris-based Galerie Laffanour, a longtime destination for the works of Le Corbusier and Jean Prouvé, is organizing the third piece of Perriand-mania. At the Miami Beach Convention Center, an exhibition called Charlotte Perriand – A House in Montmartre will show pieces designed in the 1950s for the Borot residence in Paris. Additional Perriand designs will be on display at Louis Vuitton’s Miami showroom. 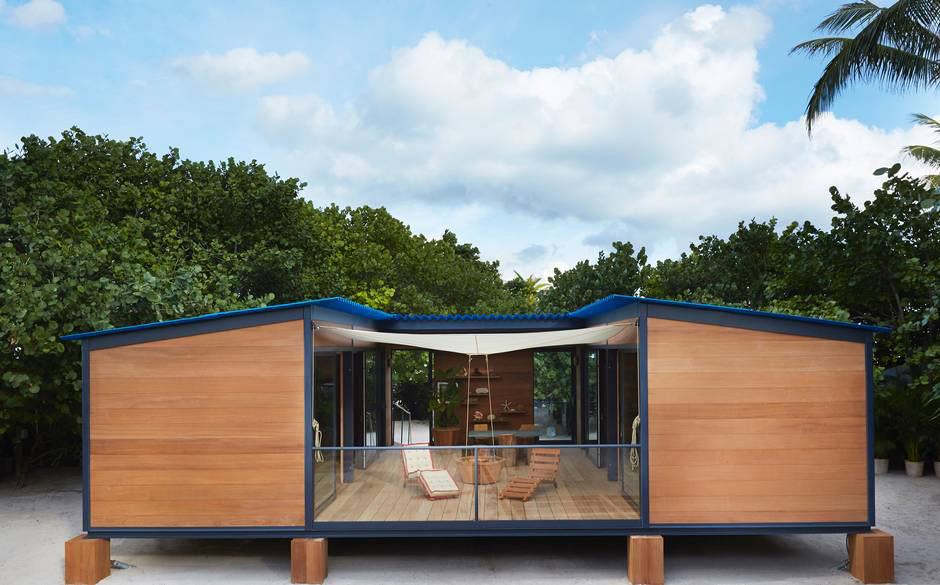 Even today, unfortunately, conversations about Perriand’s work fall back on sexist stereotypes. References to her “refined sense of color,” her love of materials, and the idea that she somehow humanized Le Corbusier’s modernism sound suspiciously like the mid-century nonsense about a “feminine touch” that Perriand herself fought against. Perriand said that when she first presented her work to Le Corbusier, he dismissed her by saying, “We don’t embroider cushions here.” She persisted, and became one of his major collaborators.

She was a committed progressive and avowedly left-leaning, one of the founding members of the influential Union des Artistes Moderne. Her embrace of color and wood might have come out of a desire to soften the lines of high modernism, but her politics also played a big part in her design decisions. From the 1930s onwards, she all but gave up the use of chrome-plated tubular steel, a luxury material that she helped pioneer, and turned to more affordable materials and finishes. Note that the prefab house in Miami uses wood, not glass, marble, or concrete. The influence of a post-war sojourn in Japan is clearly visible in the furniture for the Borot residence, both in their proportions and composition.

There is some irony in Louis Vuitton promoting the work of this distinctly anti-elitist designer, but Le Corbusier would probably also have mixed feelings about being championed by the hip hop artist Kanye West. Dead midcentury legends can’t choose their patrons. We should be glad that the fresh attention that Charlotte Perriand is getting in Miami might help expand the popular understanding of one of the too-few women in the design canon. 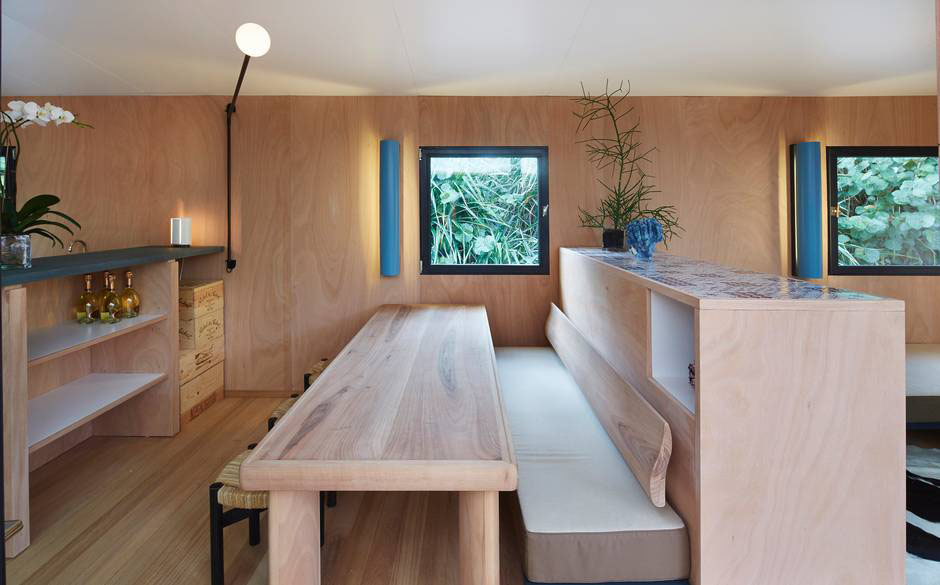 The interiors of the cabana features fixtures and furniture by Perriand. 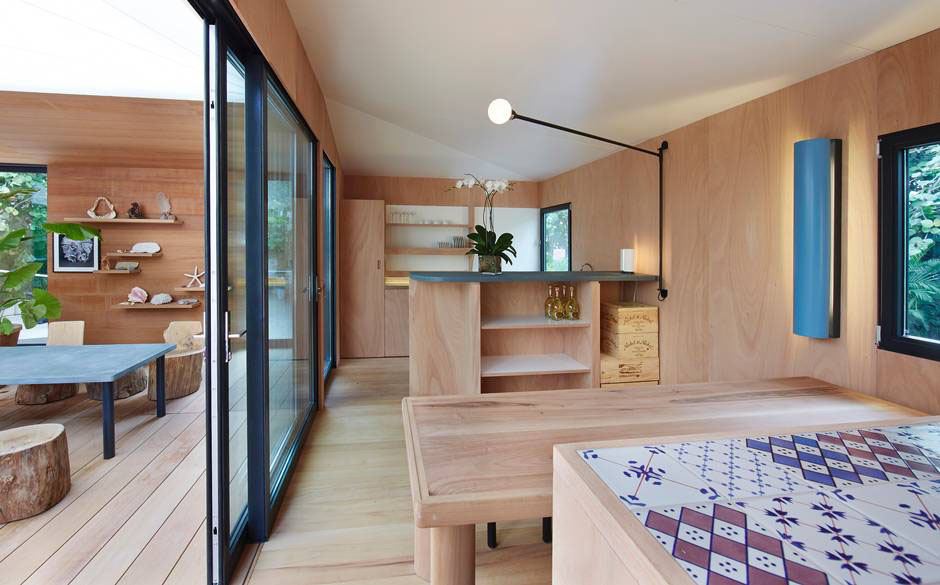 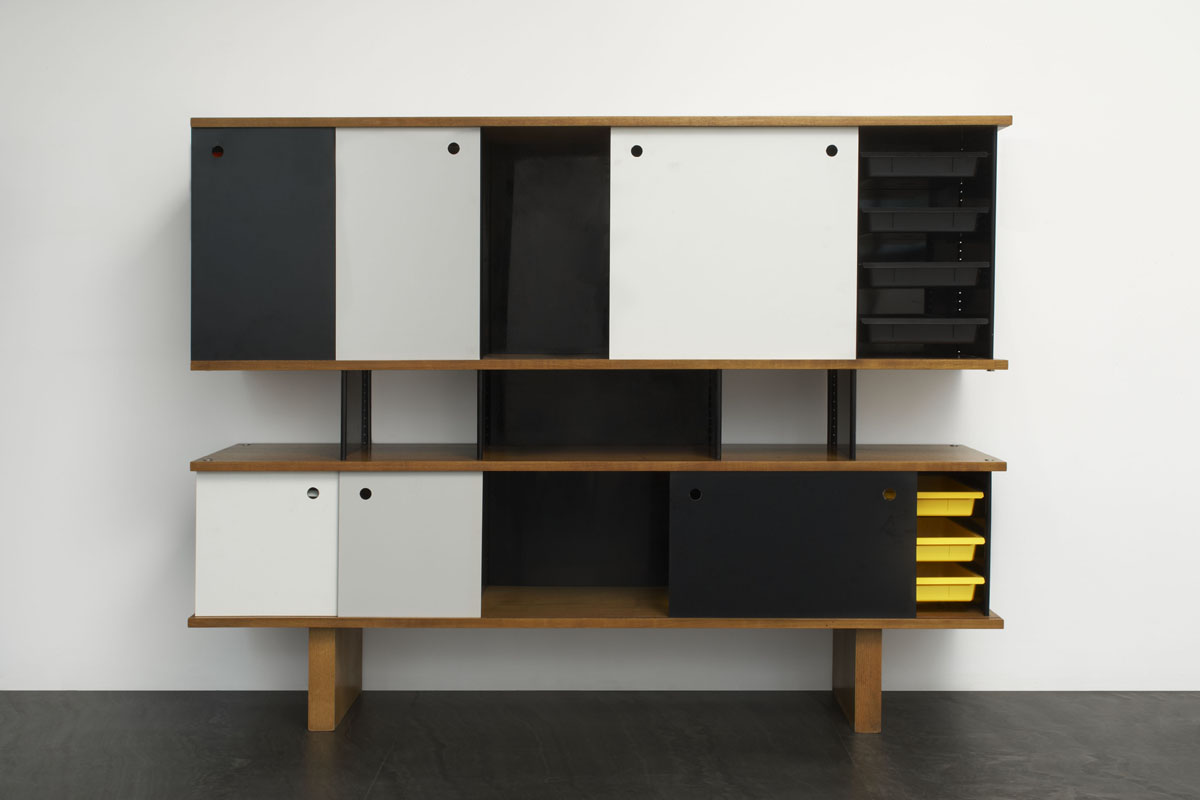 The Gallerie Laffanour organized a small exhibition of Perriand’s designs for this week’s events. The pieces on display were originally designed by Perriand in the 1950s for the Borot residence in Montmartre, among other projects.
“Taïba” bookshelves/sideboard 1963 Folded steel, wood and formica Dimensions: H. 55 x L. 72 ½ x P. 18 in. Special commission From: Phosphate senegalese compagny in taïba, Africa 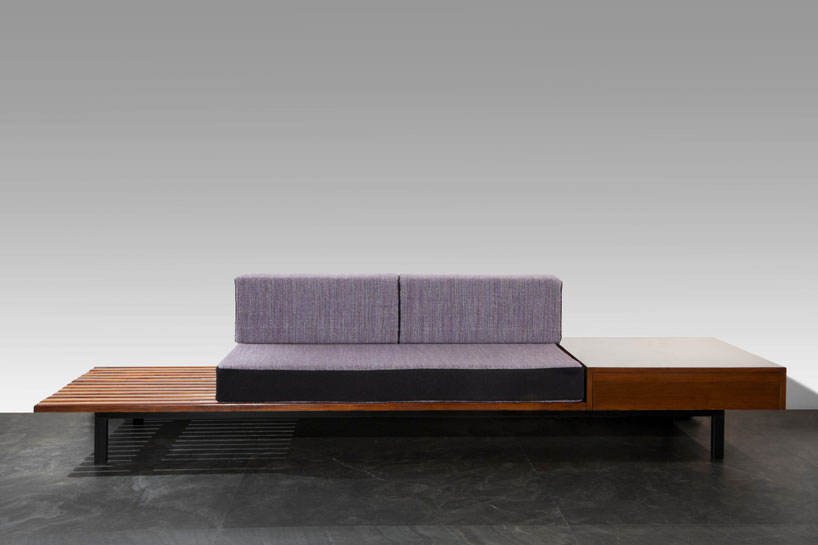 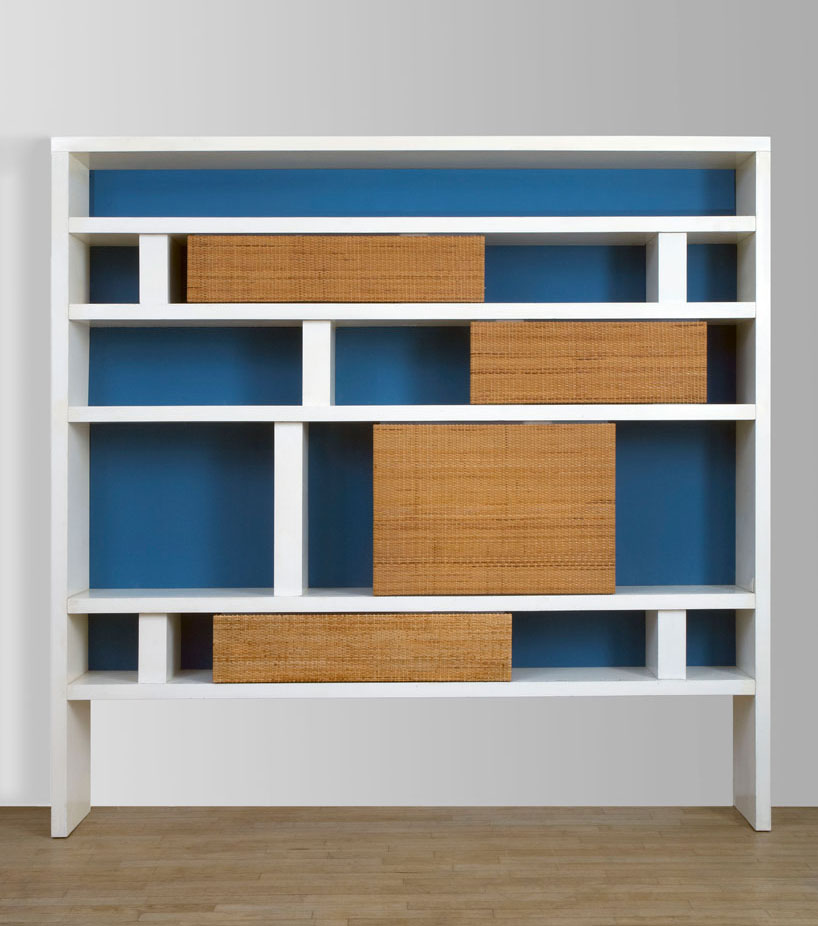