A PVC-Free Textile Made from Sugarcane

A revolutionary biobased textile uses sugarcane as its raw material. 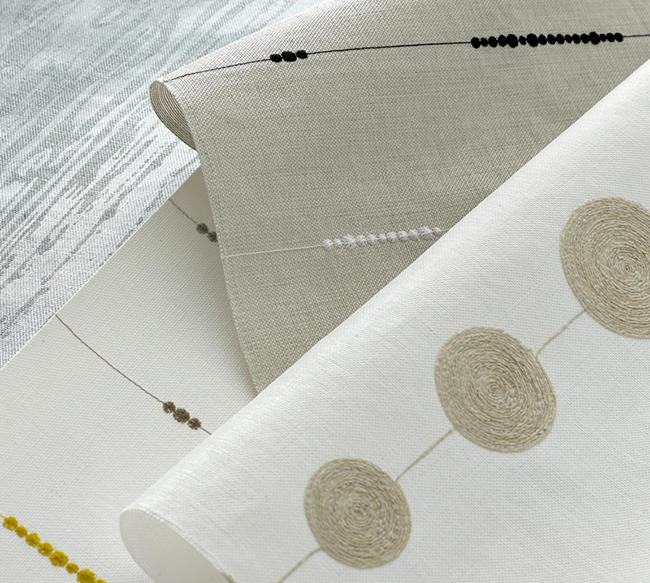 At NeoCon in June, Carnegie released a new product with an old name. Xorel, the pioneering PVC-free textile developed in 1981, now had a twenty-ﬁrst-century compatriot: Biobased Xorel, the ﬁrst high-performance interior textile derived from a majority of plant-based content. The product of seven years of research and development, Biobased Xorel represents a big step forward in eco-friendliness, and a signiﬁcant wager on Carnegie’s part that sustainability and materials transparency (a public declaration of exactly what’s in your product) will be key drivers for commercial success in the future: Three of the six Xorel patterns launched this spring are the company’s best-selling designs, and they’re available only in the sustainable material; within five to seven years, Carnegie wants to source its entire Xorel line from plants.

Biobased textiles are not new. Chemists have been experimenting with them for more than a century—turning soft woods into cellulose, and bamboo into rayon viscose—and the apparel, agriculture, and construction industries utilize them regularly. Surgeons use biobased plastics because of the material’s ability be easily reabsorbed into the body. But, with Biobased Xorel, the 63-year-old, family-owned company accomplished two breakthroughs. Carnegie pushed the plant-based content of the line, depending on the pattern, to between 60 and 85 percent—very high numbers, considering the U.S. government requires only 25 percent for the ofﬁcial biobased label. More importantly, the company ﬁgured out how to use sugarcane as the raw material, signiﬁcantly reducing the product’s environmental footprint. 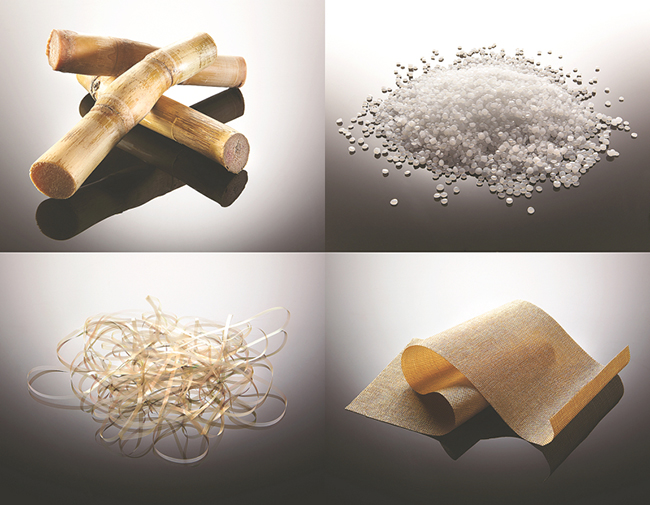 Carnegie’s new Biobased Xorel has a four-part manufacturing process. Brazilian sugarcane (top left) is crushed, fermented and distilled into ethanol, which is then transformed into polyethylene pellets (top right), extruded
into yarn (bottom left), and then woven (bottom right). Depending on the pattern, the new fabric contains between 60 and 85 percent sugarcane, sigificantly reducing the textile’s environmental impact.

Why sugarcane? The answer involves a brief look at the chemistry of polyethylene (PE), a plastic usually derived from petrochemicals. PE may be the most ubiquitous material in the world, used for everything from grocery bags and computers to automobiles and (yes) high-performance interior textiles. It’s made from ethanol, which can be distilled from a number of sources: oil, natural gas, corn, and sugarcane, among others. For the original Xorel, Carnegie reduced the product’s impact by using natural-gas-derived ethanol and powering its manufacturing facilities with renewable energy. Despite these impressive efforts—Xorel achieved a Cradle to Cradle Silver Level Certiﬁcation and is part of the Smithsonian’s permanent collection—the product remained fossil-fuel based.

Most biobased products in the United States are derived from corn, for two reasons: it’s plentiful and it’s priced artiﬁcially low, due to farm subsidies. But in a perfect world, sugarcane might be the ideal choice. And for good reason; it is a proliﬁcally renewable crop that required no genetic modiﬁcation. It is also something of an environmental workhorse. Like all plants, it stores carbon (a good thing in a warming world). What makes sugarcane unique is its roots. After the plant is harvested, the roots continue to store carbon for a number of years. “For every unit of sugarcane ethanol produced, two and a half tons of CO2 are captured and sequestered,” says Cliff Goldman, Carnegie’s president. “All plants absorb carbon dioxide, but this one holds it and keeps it there.”

While the environmental advantages of using sugarcane were clear, a whole slew of long and complicated questions remained. “The biggest challenge,” says Carnegie’s technical director, Charles Grifﬁn, “was to be sure that the new sugarcane polymer would behave exactly the same as the existing fossil-fuel polymer, in processing the yarn, in weaving the textile, and in everyday performance.” Carnegie’s technical consultants were conﬁdent that a biobased Xorel would look and perform exactly like the original, but the company needed proof beyond a reasonable doubt. “The yarn people told us, it’s the same chemistry,” Goldman says. “We’re like, ‘Yeah, OK, great, but we’ve got this product out that we’ve been selling for thirty years. We need to be one hundred percent sure.’” That testing process took several years. 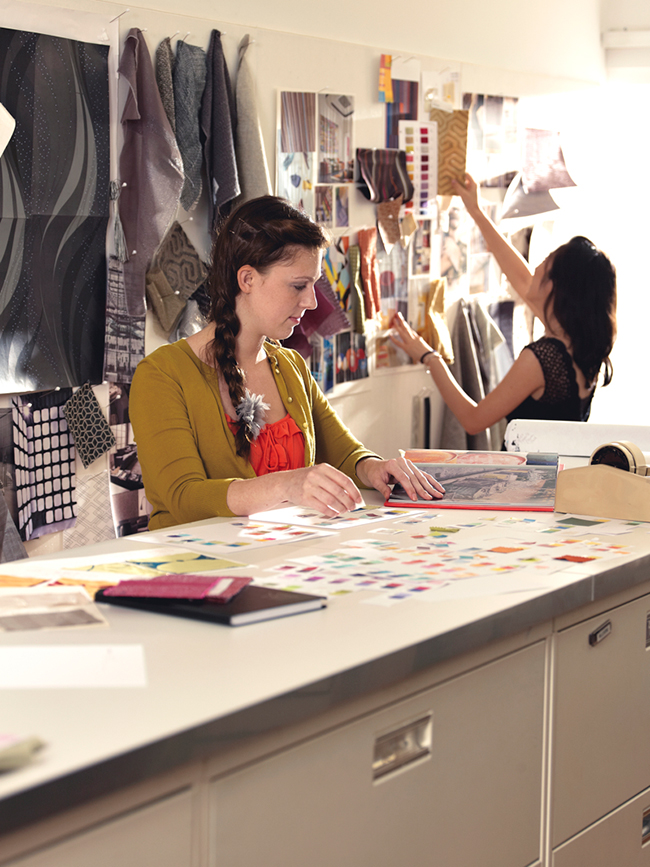 The seven-year development odyssey for Biobased Xorel had one goal: to create a plant-based fabric with exactly the same aesthetic and performance qualities as the original Xorel.

Carnegie’s emphasis on performance is perfectly understandable, given the rigorous nature of commercial interiors. Deborah Fuller, a senior project interior designer at HOK’s Dallas ofﬁce, sees the market for biobased textiles growing, with some caveats: In health-care projects, where infection control is critical, textiles must be aggressively cleanable, often with bleach. (Biobased Xorel can be cleaned with diluted bleach.) “What the design industry will want to see is a proven track record of durability; lightfastness and cleanability over time; competitive pricing; and high design. Once we have some data, designers will be less cautious about specifying alternative ﬁbers,” she says. “I see Carnegie helping to set the standard. At the moment, they don’t really have much competition.” To benchmark progress and brand its product in a marketplace full of dubious claims, Carnegie has positioned Biobased Xorel as a poster child for materials transparency, subjecting it to five separate third-party certiﬁcations. It’s an arduous process that involves independent chemical analysis, plant audits, paperwork, time, and considerable expense. “The reason we went through all this trouble is, frankly, because our little industry has just greenwashed people to death,” Goldman says.

Biobased Xorel is certiﬁed by Vincotte (the European bio label), SCS Global Services for indoor air quality, CHPS for schools, GreenSpec, and the Cradle to Cradle Institute, at the lofty gold level, making it just one of 18 (out of 270 active) to achieve that rating. Sarah Hoit, a materials scientist at Material ConneXion, describes Cradle to Cradle as “a very comprehensive and stringent certiﬁcation system.” Indeed, in a world full of LEED Platinum buildings, there are currently no Cradle to Cradle Platinum Level products, underscoring the impossibility (at this point) of manufacturing a globally distributed product with no environmental impact, made entirely of safe and perpetually recycled materials. “That’s the North Star we’re all shooting for,” says Jay Bolus, vice president of technical operations at McDonough Braungart Design Chemistry, the Cradle to Cradle consultancy that helped Carnegie with Xorel. 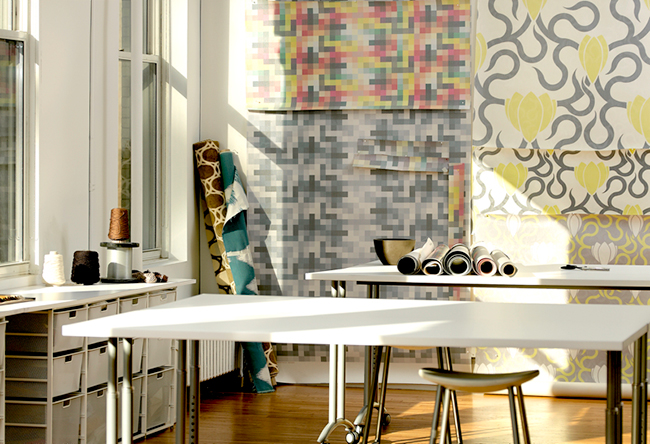 To further emphasize its commitment to transparency, Carnegie has ﬁled a Health Product Declaration, voluntarily listing all of Biobased Xorel’s ingredients, including the proprietary ones. It’s a potent piece of symbolism, a great addition to Xorel’s green narrative, but also a smart business response to both a rapidly transforming marketplace and pressure from the architecture and design community. “We’re getting letters from Cannon Design, HDR, Perkins + Will, who are basically saying: If your products are not listed with Health Product Declarations by the end of 2014, we’re not going to allow designers to spec them anymore,” Goldman says. “That’s a pretty big step.”

In some ways, the recent attacks on LEED in Mississippi, Alabama, and Georgia—orchestrated by timber, plastic, and chemical companies—are a clear sign of the program’s bur-geoning foothold in the marketplace. Green building materials aren’t niche anymore. A report by the Freedonia Group forecasts that growth in U.S. construction will raise demand for sustainable materials to $86 billion by 2017. So companies like Carnegie have a unique opportunity to do right and do well. “They’re well positioned as a leader in this space,” Bolus says. “They were smart, taking a mature product with traction and making it better.”

Even the desire for transparency has gone mainstream: Walmart is compiling a so-called red list of offending materials that it will refuse to stock. “Today, people want to know where their food is grown, where their clothing is made,” Goldman says. “In the future, design products will be no different. I think the market eventually moves things. We don’t need regulations. Eventually, architects, designers, and building owners gravitate to what’s better. And the people who’ve been hiding behind rocks and putting up signs about their products get exposed. Transparency is about giving architects and designers the opportunity to understand better what they’re putting into their buildings.”