All is not perfectly well in the world of architecture, and this advocacy group is looking to improve it. 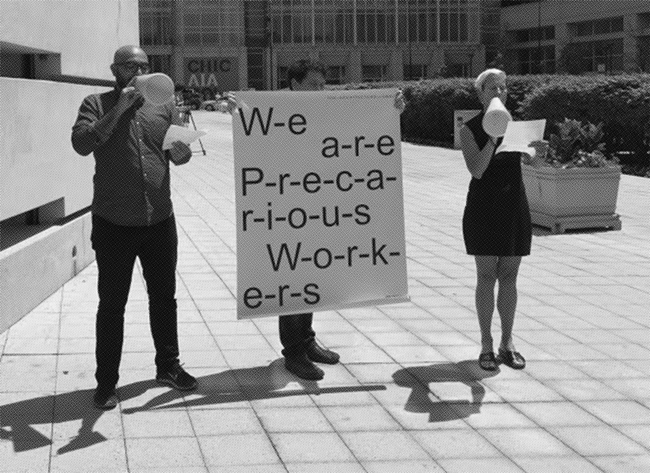 In the wake of November’s presidential election results, a fresh controversy embroiled the country’s architects. The national head of the AIA, Robert Ivy, had scarcely waited for dawn to break on November 9 to make public the organization’s support for the president-elect, Donald J. Trump. Ivy’s statement reminded our new “Cheeto”- in-chief of his campaign promises to get America’s infrastructure working again. The tone was vaguely cajoling: “We stand ready to work with him,” Ivy wrote, in an egregious use of the royal “we.”

The AIA’s 89,000 members, needless to say, were not consulted as to the contents of Ivy’s communiqué. Amid the ensuing backlash—condemnations poured in from architects and industry commentators on all sides—the response from the Architecture Lobby was the clearest rebuke, if for no other reason than it appeared to be the most constructive. Laid out in 600 or so words, the statement balanced an unrelenting critique with clear-minded resolve to build opposition—not just to the AIA or Trump, but against the most immiserating aspects of contemporary society as they are reproduced within the world of architecture.

The lobby was founded in 2013 by architect and academic Peggy Deamer, currently a professor at the Yale School of Architecture, and a handful of her like-minded (and notably younger) colleagues. What was once a scrappy outfit born in Ivy League lecture halls is now a growing body with eight chapters of committed members across the country. The effect of the postelection scramble was galvanizing, instantly doubling the member pool, and the lobby is planning a slate of new projects to take advantage of that momentum.

Though still small, it functions close to something like a para-organization or a radical caucus to the national AIA. Hamstrung by a frail leadership, a corporatist structure, and antitrust laws, the AIA is a poor force for the kind of progress the lobby throws its weight behind—for instance, labor reforms and full gender equity and diversity. Moreover, the lobby is necessary, Deamer says, because the AIA can’t change its stripes, try as it might. “We came together because we saw that it wasn’t doing what it should for the profession and that they couldn’t ever do it.”

Labor issues are the lobby’s bread and butter. It seems an unfashionable program in today’s political climate of polls and downwardly managed expectations, until Deamer discusses the lobby’s goals, adopting a tone strikingly similar to that of Bernie Sanders’ left-populist platform: “It’s more urgent than ever that we have a system that highlights labor matters, that fights for fairness and not management, that is against oligarchy or money, that argues for a democratic approach to fair-pay agency and creative access.” As was the case with Sanders, it took an embittered election cycle to create a receptive environment for that message. “There was a sense that our mission wasn’t being heard before. But it is now.” 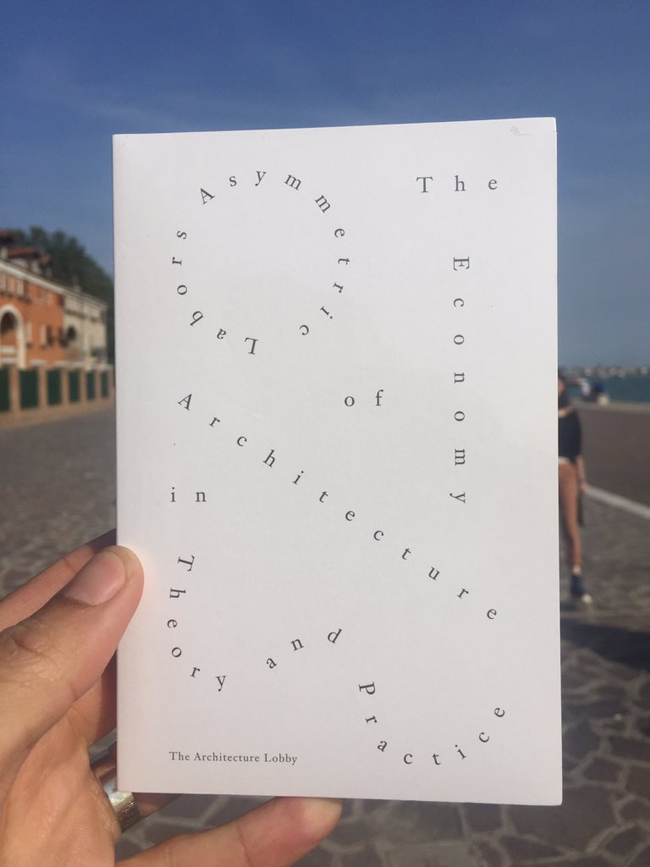 Last year, the lobby published its first book, Asymmetric Labors: The Economy of Architecture in Theory and Practice, which they have made free to download on their website.

Cynics might point out that the lobby’s workerist position is antiquated, a sort of mothballed romanticism for factory walkouts. It’s unlikely that manufacturing jobs will ever return to America, they may lament, citing the commonplace, don’t-you-know-it wisdom that we live in postindustrial times. They may characterize its calls for worker solidarity as hollow, architecture being a historically white-collar (or, in the lobby’s parlance, “gentlemanly”) profession. It’s certainly true that practicing architects’ median salaries are relatively high, and that methods of extracting surplus value seem trivial compared with the barbarous exploitation rampant in, say, the mineral-harvesting business. “I don’t want to exaggerate our condition as exploited laborers because we are very privileged workers in the economy,” says Manuel Shvartzberg, head of the new Los Angeles chapter.

That privilege, however, comes at the expense of financial security and personal well-being. For a good chunk of their careers, architects are expected to endure unpaid or low-paying work, either through internships or speculative undertakings like competitions, to say nothing of the crushing debt accrued over years of required study. But it all seems a worthwhile sacrifice because many architects toil under the illusion that their work is produced under conditions of leisure, that it is largely creative and so defies conventional compensation mechanisms.

“Are we the Bernie Sanders of architecture?” Deamer asks. “I’ll take it.”

It is not, says the lobby’s organization coordinator Keefer Dunn, especially as the tools of the architectural trade become increasingly standardized. Modifying Antonio Negri’s oft-misunderstood term, he describes this process as the “proletarianization of immaterial labor,” whereby sedentary work acquires aspects of alienation—imagine not Chaplin’s kinetic factory floor in Modern Times, but the mundane, sterile office environment of an architecture firm, with its entrails of computer cables and battery of screens. If our cynics demand a more naked form of aggrieved labor for their satisfaction, they should look to the university library or lecture hall. Academics, such as the architectural historians and theorists who make up a good part of the lobby’s base, are overworked, underpaid, and forced to adapt to the peripatetic, pauperized conditions of adjunct life. Who has it worse? A “meaningful solidarity with other workers and disadvantaged communities” renders the question invalid, Dunn opines.

A seasoned campus organizer (he nearly flunked out of an undergraduate studio at Georgia Tech after skipping class to join labor protests), Dunn is spearheading a unionization campaign that has caused slight unease among the membership. But even getting to that point will involve struggle, and tactical questions are ever debated. A baseline of sorts, the group’s 2014 manifesto advances ten propositions intended to amass solidarity throughout the culture. The points are far-ranging, from workplace-oriented actions and reconfiguring the licensure apparatus to building alternatives to the neoliberal order. This dual agenda—basic demands enrobed in high-minded articles of faith—is undeniably appealing, particularly to those harboring political passions but finding themselves without an outlet in a famously apolitical profession. “I read the manifesto and thought, ‘This is what I’ve been waiting for to come along,’” Dunn recalls, adding that he was attracted to the lobby because of “how it combines the kind of direct activism and a set of labor demands for architects.” Priyanka Shah, who joined in 2015 “after spending a dinner party railing about work culture in architecture” in the company of a lobby member, found the message a riveting rebuke of the “unquestioning approach” that pervades studio and professional life. By contrast, the lobby seemed like “a space to start addressing these questions and hopefully enacting change.” 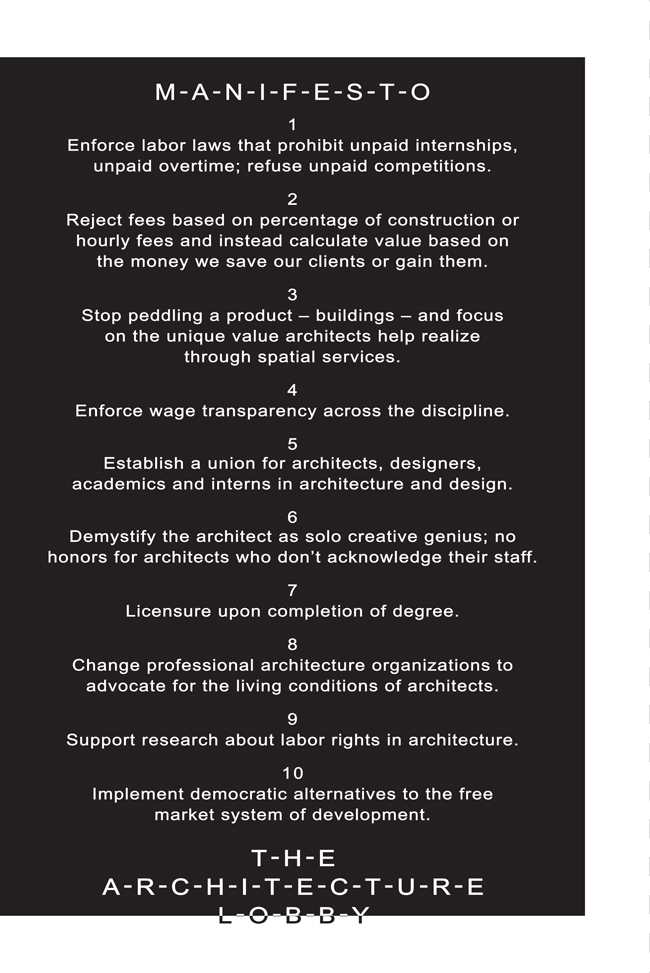 Testimonials such as these can imply a lobby-wide consensus that isn’t altogether there. While most members are on the side of collective bargaining, they are not all convinced of the traditional opposition between workers and management.  “Part of the issue is what is considered management is so much more ambiguous in architecture,” Deamer explains, alluding to other industries such as nursing where those fault lines are much more evident. “In small or medium-size firms, you have people who are employees but see themselves as project managers, and so feel more aligned with the managers than they do with their fellow workers. What do you have to do to have those firms enter into the terms of a union agreement?”

There is also the issue of the lobby’s intellectual foundation. In the beginning, it coalesced over theoretical resonances as much as shared concerns and frustrations. Marxian analysis, including its critical deepening of the labor theory of value once central to classical liberal economics (and dispensed with in its “neoliberal” permutation), was, and to a large extent remains, the unifying element. The lobby’s published statements and materials, however, aren’t laden with its axioms and betray other influences, including thinkers such as Michel Foucault, Pierre Bourdieu, and Bruno Latour. “There is a real intellectual diversity,” says Shvartzberg. He points to Asymmetric Labors: The Economy of Architecture in Theory and Practice, the first book-length publication to appear under the collective’s name, as evidence. More than 50 contributors including practicing architects, academics, and architectural journalists furnished short essays for the volume, with many entries exploring the connection between theory and practice in both systematic and personal ways. Capsule exegeses about the rise of the architecture PhD or subversive models of historiography appear alongside earnest portrayals of work-life balance, chronic gender disparities, and the pressures of debt. “I think it’s really important for all of us to be grounded because we do want to be in the real world, and that’s how the real world is,” Shvartzberg says.

Points of disagreement can be hashed out at lobby chapter meetings or during regular conference calls. Members’ participation in these discussions guarantees them a voting right to decide, among other things, the composition of the organizing committee, which changes annually, or to lend their approval to a project proposal. Several sanctioned projects are currently under way, such as the Architecture Lobby curriculum, which is designed to circulate the group’s ideological and professional positions throughout academia. A certification system along the lines of LEED but applied to individual firms with progressive labor practices is also in the works.

The impacts of these initiatives will be hard to measure, and it may well turn out that they gain little traction at all. But political activism has always operated at a glacial pace, except for ultrarare moments of revolutionary explosion. Steady resolve, theoretical clarity, and direct action are all necessary.

“I think we’re all committed to thinking about this more as a social movement and less like a firm,” Shvartzberg affirms, citing the worldwide Occupy demonstrations and the Podemos Party in Spain.

In the future, opportunities may open up for insurgency and possibly reform. What if, once activists apply the right pressure, the center falls and, in its retreat, clears the way for a truly progressive platform? The parallels to the Democratic Party and its small but vocal left-populist contingent haven’t escaped members. “Are we the Bernie Sanders of architecture?” Deamer asks. “I don’t know, but I’ll take it.” 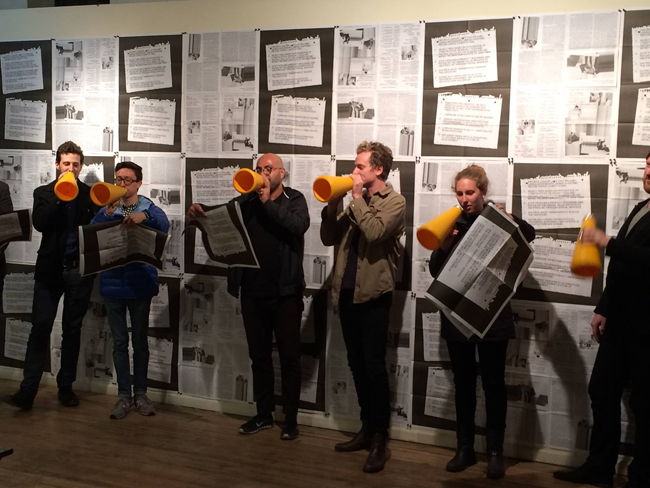