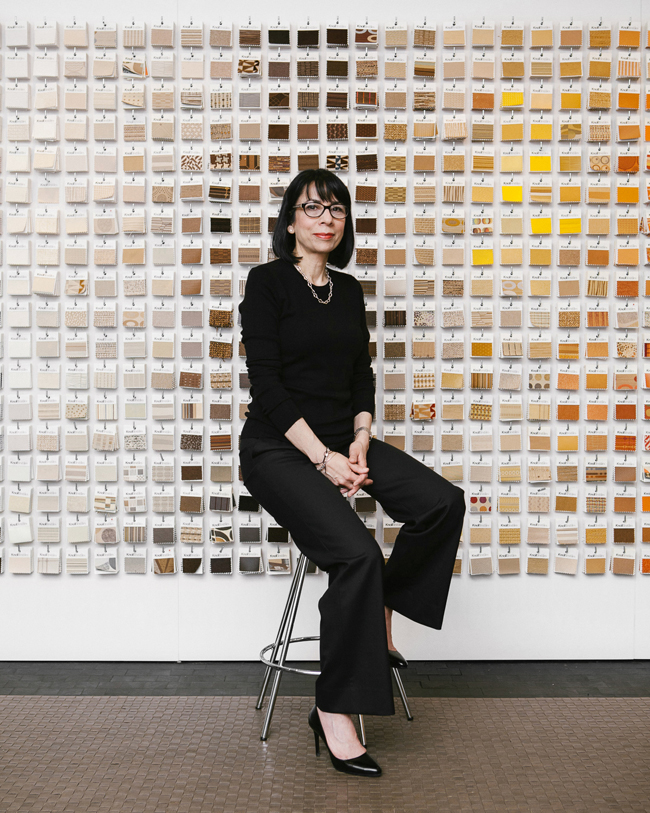 Dorothy Cosonas, creative director of KnollTextiles, against a wall of swatches, most of them fabrics released during her tenure.

“Brands don’t create, designers do,” reads a small strip of paper tacked to the wall in Dorothy Cosonas’s midtown Manhattan office. The yellowed clipping from a 2012 Women’s Wear Daily article seems to capture the daily charge for the creative director of KnollTextiles. For over a decade, she has been shepherding the design and production of wall-coverings, upholstery, drapery, privacy curtains, and a range of other products for one of the world’s most iconic design brands.

With seven of KnollTextiles’ releases—four of them designed by Cosonas herself—entered in the permanent collection of the Cooper Hewitt, Smithsonian Design Museum, she is an important figure in contemporary textiles, says Matilda McQuaid, the museum’s deputy curatorial director and head of textiles. “She continues that wonderful tradition of modern textiles for contemporary interiors that Knoll has produced for many years,” she says, “but she’s also paved her own path that’s not always strictly characteristic of the rigidity of the typical Modernist textile,” noting that Cosonas’s love of deep colors, patterns, and ornaments is a far cry from the fabrics Knoll was known for in its early years.

Cosonas’s design career began immediately after she graduated from the Fashion Institute of Technology in New York City. A skilled draftsman, she applied her degrees in fine arts and textile design at the design studios of the contract upholstery manufacturer Unika Vaev. Under the mentorship of designer Sina Pearson, Cosonas quickly learned the ins and outs of the textile industry and honed her knack for modern design. She rose in the ranks to become Unika Vaev’s vice president of design, and in 2005 she left to pick up the reins of the textile division of the legendary brand built by Modernist design icon and National Medal of Arts recipient Florence Knoll Bassett.

Living up to KnollTextiles’ storied legacy weighs on Cosonas, who is currently doing a “deep dive” into the company’s archives in preparation for its 70th anniversary next year. “Some people say I’m too serious. But it’s a job you have to take seriously every day,” says Cosonas, who is now in her 12th year at the company. “I want to live up to the name and not of it.” Florence Knoll, she explains, built a company with a reputation for being the gold standard for Modern classics. “We will always lead in the idea of aesthetic and principle and refinement. I think that’s something that everyone who works here understands.”

Cosonas herself is the latest in a line of great designers at the textile division—from Eszter Haraszty and Suzanne Huguenin in the midcentury era to Hazel Siegel and Suzanne Tick in more recent times—a history explored at the 2011 Bard Graduate Center show Knoll Textiles, 1945–2010. “KnollTextiles has been a captivating element of the Knoll design equation, helping to solve how people interact with their environments,” says Knoll’s CEO, Andrew Cogan. “The opportunities for groundbreaking designs are virtually limitless—working with new technologies on innovative weaves and constructions, pioneering new architectural applications, and expanding the role of guest designers. Dorothy consistently sets the pace for our industry in terms of design and style.”

That pace is often hectic, in a competitive industry that expects five to six new collections every year. Knowing that the design stage triggers a whole chain of events in Knoll’s operations, Cosonas obsessively attends to every aspect of the 12- to 14-month textile development process, spearheading the research with her team, choosing just the right mill to work with, and working through several increasingly refined rounds of prototyping. 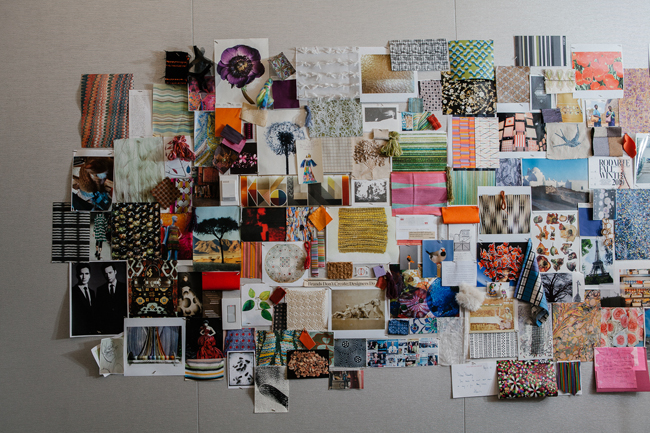 Instead of leaning on KnollTextiles’ trove of midcentury-modern bestsellers, she and her small design team strive to hit that elusive formula of introducing fresh ideas that feel timeless, season after season. “How to be current, but slightly ahead of the curve, and yet still be classic so people don’t get tired of it so quickly—that to me is the biggest challenge,” she says.

Occupying an entire wall in her office is an artfully arranged inspiration pinup board. From the dozens of photos, clippings, and swatches, it’s evident that fashion is Cosonas’s favorite source of ideas. Whether it is the sleeve detail of a Chanel garment or Alexander McQueen’s robot-sprayed No. 13 dress, Cosonas has expertly translated motifs, textures, and details to textiles befitting modern interiors. “I look at [fashion] as one of the few disciplines left that creates trends that people follow,” she explains. “These fashion houses are getting together with suppliers, dyers, and yarn people to determine that this is what the world needs to see next.”

Cosonas is able to make a masterful leap from inspiration to contract textile while still being innovative and original, says McQuaid. Talking about Topography, one of Cosonas’s designs in the Cooper Hewitt’s collection, she says: “The inspiration was Missoni, but not in any way recognizable as Missoni. It looks like geological strata to me. It’s hard to not make something literal or even somewhat literal, but she really transforms it so it’s an original. She has this wonderful sense of hybrid design.” She retains that ability while collaborating with a host of established and emerging designers, helping them translate their own aesthetic vision into fabric. Recent notables among her list of guest designers include Dutch book designer Irma Boom for the 2013 Stripes collection, and architect David Adjaye for an African-inspired collection in 2015. For KnollTextiles’ high-end Luxe line, Cosonas has also worked with several cutting-edge American fashion designers, such as Jack McCollough and Lazaro Hernandez of Proenza Schouler, Kate and Laura Mulleavy of Rodarte, Max Osterweis and Erin Beatty of SUNO, and Michelle Obama favorite Maria Cornejo.

Most of these fashion designers were just coming into the mainstream when they were invited to design a collection for Knoll. “Dorothy’s had an important hand in making these textiles at the right price point, and in the spirit of that particular designer too,” McQuaid says. “It’s like having a good editor—keeping the voice of the author but making it clear and more articulate.”

Cornejo, who has developed six textiles for Knoll that reflect her signature air for blending modern, urban, and international influences, describes working with Cosonas as a “designer’s dream.” “I don’t have the understanding of the requirements that are needed for home furnishings,” explains Cornejo. “I think the most amazing thing is to collaborate with someone who is so knowledgeable.”

The daughter of Greek émigrés, Cosonas recently turned to personal heirlooms for inspiration. For the 2016 Odyssey collection unveiled this past June at NeoCon, she modernized embroidery motifs from her grand- mother’s rug, which was handwoven by nuns from the island of Lesbos for her dowry. The rug was one of the mementos Cosonas’s mother managed to take with her when they immigrated to the United States in the 1950s. 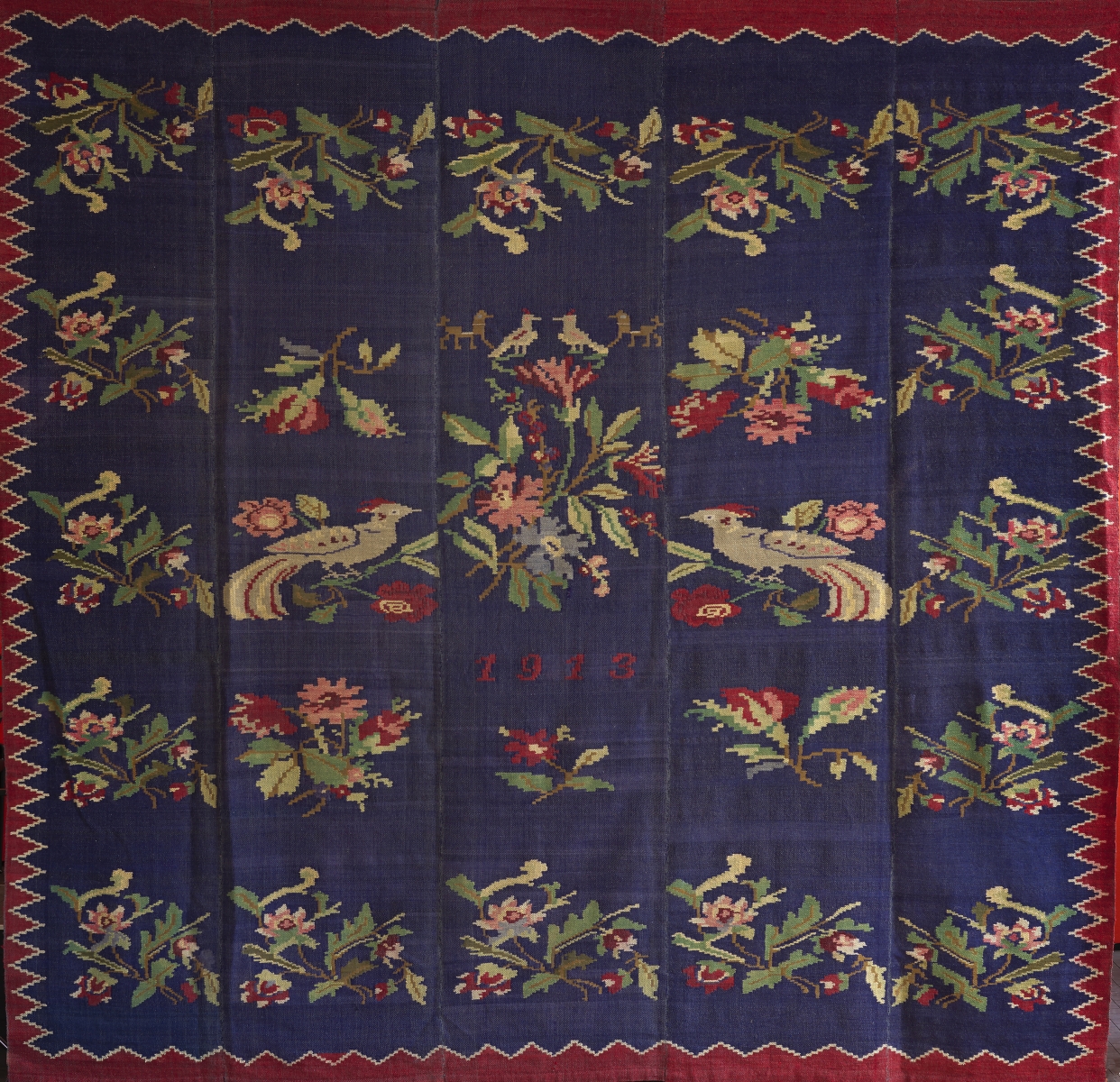 This handwoven rug, dated 1913, was part of Cosonas’s grandmother’s dowry. It was the starting point for the Odyssey collection. 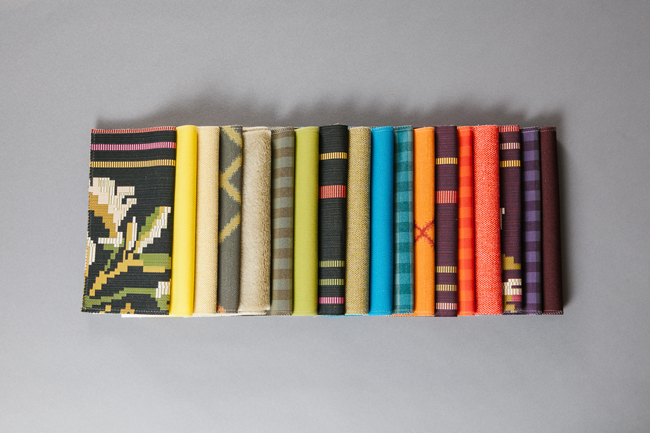 The final Odyssey collection has three textiles that were inspired by the rug—Andissa, Vatera, and Yeni—as well as three solid upholstery fabrics. A wall-covering, a panel fabric, and a drapery fabric, not shown here, round out the offerings.

After rounds of experimentation, zooming into the rug’s details and playing with its scale, Cosonas settled on a distinctive stripe and geometric floral pattern woven with 15 different yarn colors for the Andissa fabric, a standout in the collection. Two other fabrics, Vatera and Yeni, were also based on the rug.

“I was nervous about this launch because it was different,” she says, describing the challenge of adapting traditional elements to something that feels contemporary.

But then, six months into the development of the Odyssey line, Alexander McQueen and Yves Saint Laurent came out with similar Old World–meets– modern embroidery–themed collections. “It made me feel like ‘OK, I’m on the right path here,’” she says. In terms of trends, interior fabrics are often a year behind the fashion industry—but in this case Cosonas had anticipated an idea that would make it onto the runways.

The reward, she says, is seeing Knoll’s textiles in the real world. “From this idea to someone’s space—that to me is really the ultimate compliment, that someone chose ours, in a world where there are already so many fabrics,” she says. “When I’m walking down the street [and I can say], ‘My God, that’s our fabric!’ it still makes me very happy. That excites me to this day.”

KnollTextiles has opened an exhibit on fashion collaborations with cutting edge designers Proenza Schouler, Rodarte, Suno and Maria Cornejo at its NYC Showroom (1330 Avenue of the Americas) in celebration of the first ever New York Textiles Month. The materials shown include never before seen designer samples, mood boards, process work, sketches, yarn and color development. It will be open until September 30. 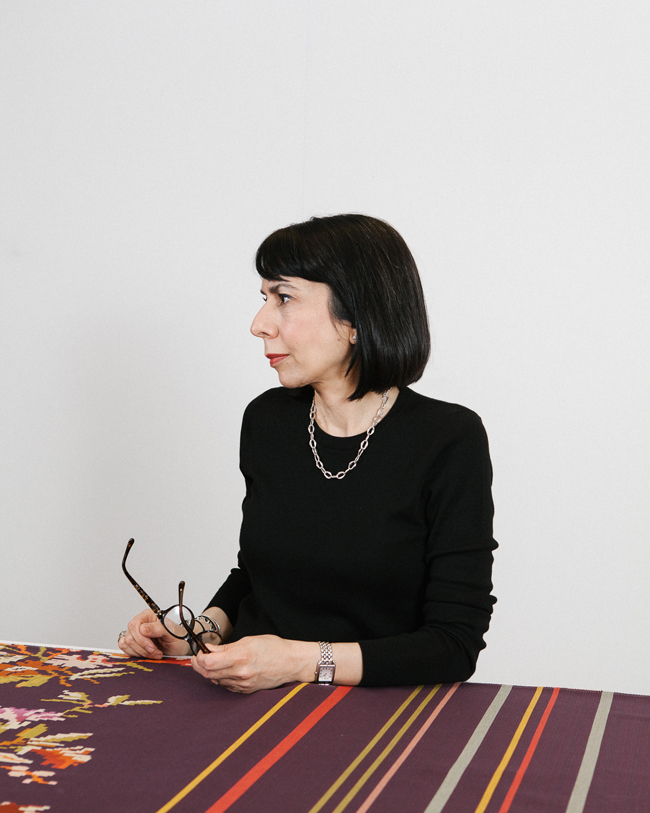 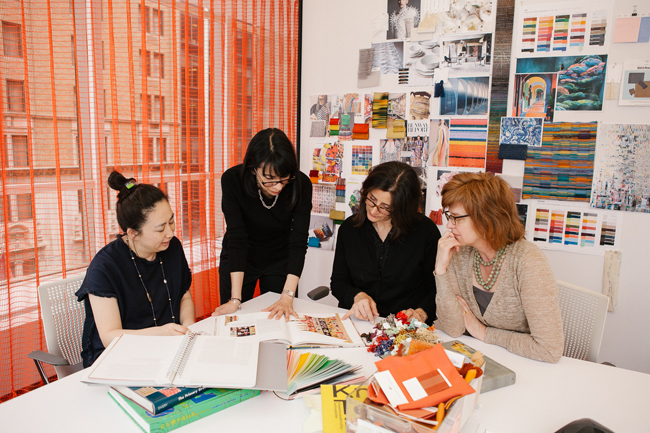 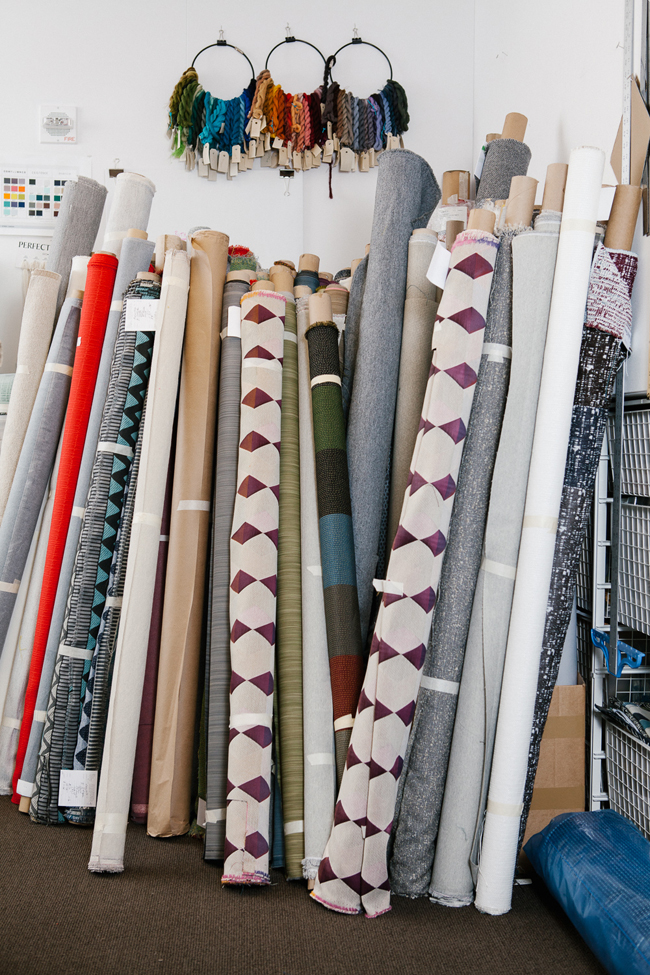 Rolls of textiles and rings with skeins of sample yarns in the KnollTextiles design studio. 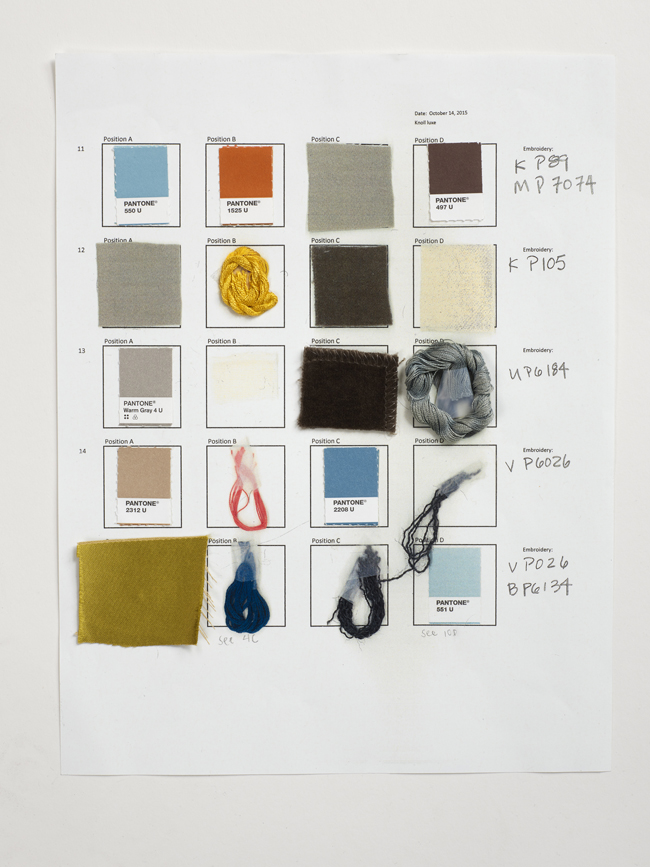 Cosonas designed the latest Knoll Luxe collection herself, using natural materials and specialty techniques like embroidery. In this sheet used to specify the colors of the Jasmine textile, Cosonas incorporated not just the customary Pantone chips but also real samples of yarn and fabric. 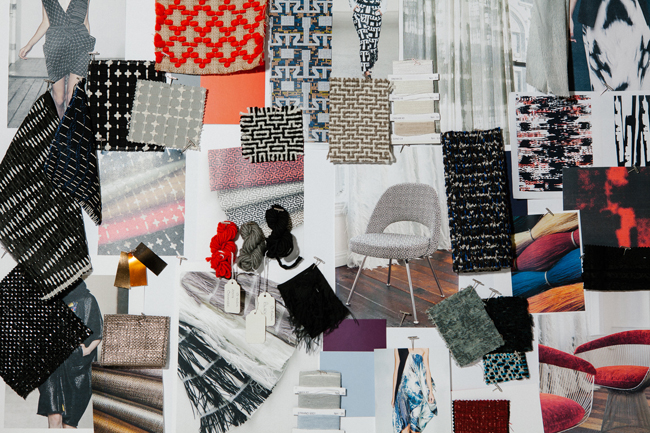 Fashion designer Maria Cornejo’s inspiration board. As part of the ongoing New York Textile Month, KnollTextiles will be showcasing the process materials generated by its guest designers.