EcoLogicStudio Proposes a New Synergy Between Nature and Technology

Architects Marco Poletto and Claudia Pasquero propose a final overthrow of Modernism through a new synergy between nature and technology. 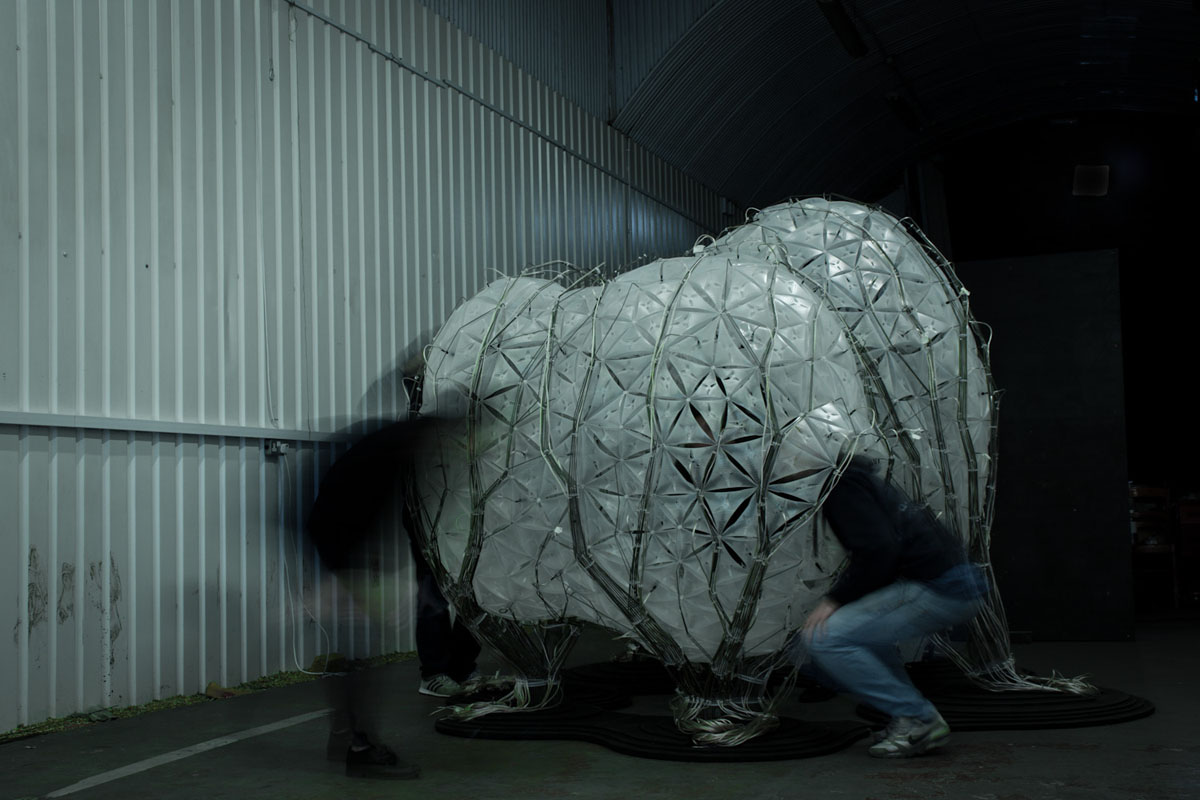 The form of ecoLogicStudio’s 2013 META-follies project plays off the language of cloud computing and the architectural typology of the grotto. The pavilion demonstrated the virtues of “taking trash seriously,” whereby urban refuse—recycled plastics, cheap circuits, frayed wire cables—was “hacked” and augmented to yield usable building materials. The architects have termed the process “slow prototyping,” an analog of the Slow Food movement.

If there is one thing that concerns all artists, architects, and designers—all of contemporary creative culture—it’s the absence of a genuine successor to Modernism and all its petty variants. For architect Marco Poletto, that paradigm is already here. It’s just that other architects haven’t noticed.

“A large part of the architectural and urbanist community is still locked into a technocratic way of thinking,” says Poletto, who is cofounder, with Claudia Pasquero, of London-based ecoLogicStudio. “That was a frame that was obviously an outcome of the Industrial Revolution, a model very much based on the idea of controlling nature as a machine. Now, we have a new notion of a machine that is much more biological, much more inspired by the notion of complexity.”

That last word—a catchall for denoting the presence of systems thinking—gets thrown around a lot in architectural circles, especially in the academy. Poletto and Pasquero, both 39, aren’t immune to that culture. They studied at the Architectural Association (AA) more than a decade ago, at a time when the school was pioneering the use of groundbreaking digital technologies. Before long they were running workshops, an AA summer school, and their own research unit; in 2004, they founded ecoLogicStudio there. “It was very much the Year Zero of digital design and computation,” Poletto says, recalling the delirious pursuit of algorithmic complexity and heady, often Deleuzian theory that swept through the school’s studios.

But what seemed a fundamental shift in architectural practice was only half the equation. “It was almost exclusively a question of developing an artificial version of nature in the computer. Instead, we always had an interest in the possibility to map, engage, and extract information from the physical environment,” says Poletto. Combining both methodologies, he says, represented “an exploration of how digital technologies are beginning to feed back to a large set of concerns.”

EcoLogicStudio aims to find the “synergistic combination” of machine and nature. Towards that end, the pair developed a lexicon of hybrid concepts—each entailing a different “protocol,” Poletto says—intended to demonstrate the potency of such a synthesis. META-Follies or ecoMachines are evocative, if clunky, portmanteaus that function as taxonomic devices with which to group the studio’s built and unbuilt projects. The former, a traveling pavilion that assumed the analog form of the digital “cloud,” was fashioned out of postconsumer plastics and cheap hardware; the architects’ installation at the 2008 Venice Biennale, an ambiguous apparatus impregnated with plant bacteria, can be slotted into the latter category. 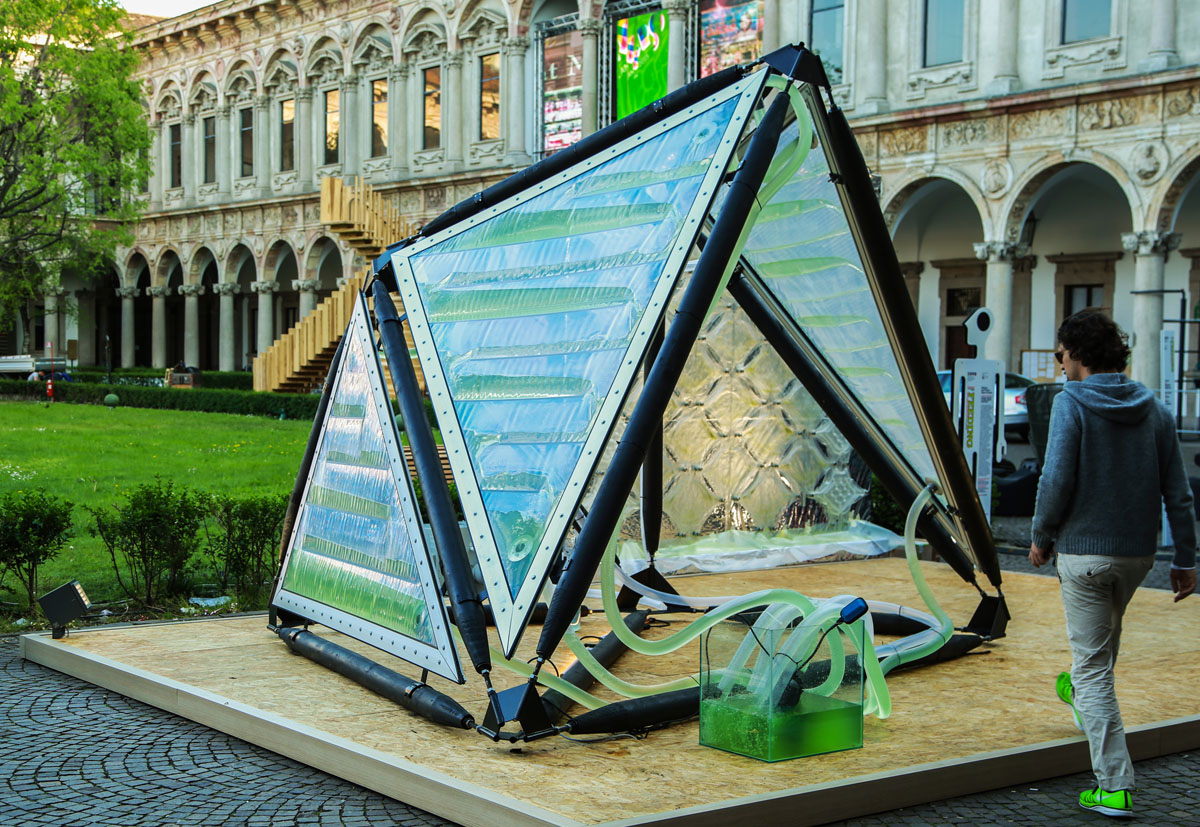 The architects have experimented with using algae as a building material over the course of several installations, beginning with the “ecoMachines” exhibited at the Venice Biennale in 2006 and 2008. EcoLogicStudio recently exhibited a prototype module from their forthcoming Urban Algae Canopy pavilion. The structure will be built in May as part of the 2015 Milan Expo’s Future Food District.

What reinforced concrete was to modern architects, algae is to ecoLogicStudio. When it comes to the stuff, Poletto and Pasquero admittedly have a heavy hand. It’s featured in several of the group’s installations as a kind of visual shorthand of the new paradigm. Developed for the 2015 Milan Expo, Urban Algae Canopy builds off earlier prototypes and gallery works, expanding these chamber works into a sweeping, symphonic urban pavilion. When finished, the architects say it will be the “world’s first bio-digital” structure, a distinction that holds real significance for them.

The culmination of more than eight years of research and experiments, the pavilion will incorporate specially designed ETFE modules that will be filled with water, the conduit for a colony of algae cells. As the organisms grow, they will modulate the structure’s shading performance, scattering dappled light onto visitors below. “It’s a kind of biological system at work that will be evolving in its own way,” Poletto says. More importantly, the project is an analog for much larger applications. Poletto and Pasquero, who now run the Bio-Urban Design Lab at the Bartlett, UCL, envision entire “bio-cities” capable of transforming pollutants into nutrients, waste into raw building material. “The city is unavoidable.”

A rendering of the completed canopy

“Human, technological, and environmental forces are increasingly enmeshed and coevolutionary. Architecture is no exception. That’s why the work of avant-garde practices such as ecoLogicStudio is particularly important: It allows us to explore the intersection of biology and design. EcoLogicStudio recognizes that forms found in nature are a result of dynamic interactions and hence strives to develop computational frameworks to mimic them. Their research on energy-generating algae is a glimpse into tomorrow’s living, responsive urban environments.”
—Carlo Ratti, director of the MIT SENSEable City Laboratory