Working out of New Delhi and London, the architect and urban researcher tackles sanitation and housing in low-income neighborhoods. 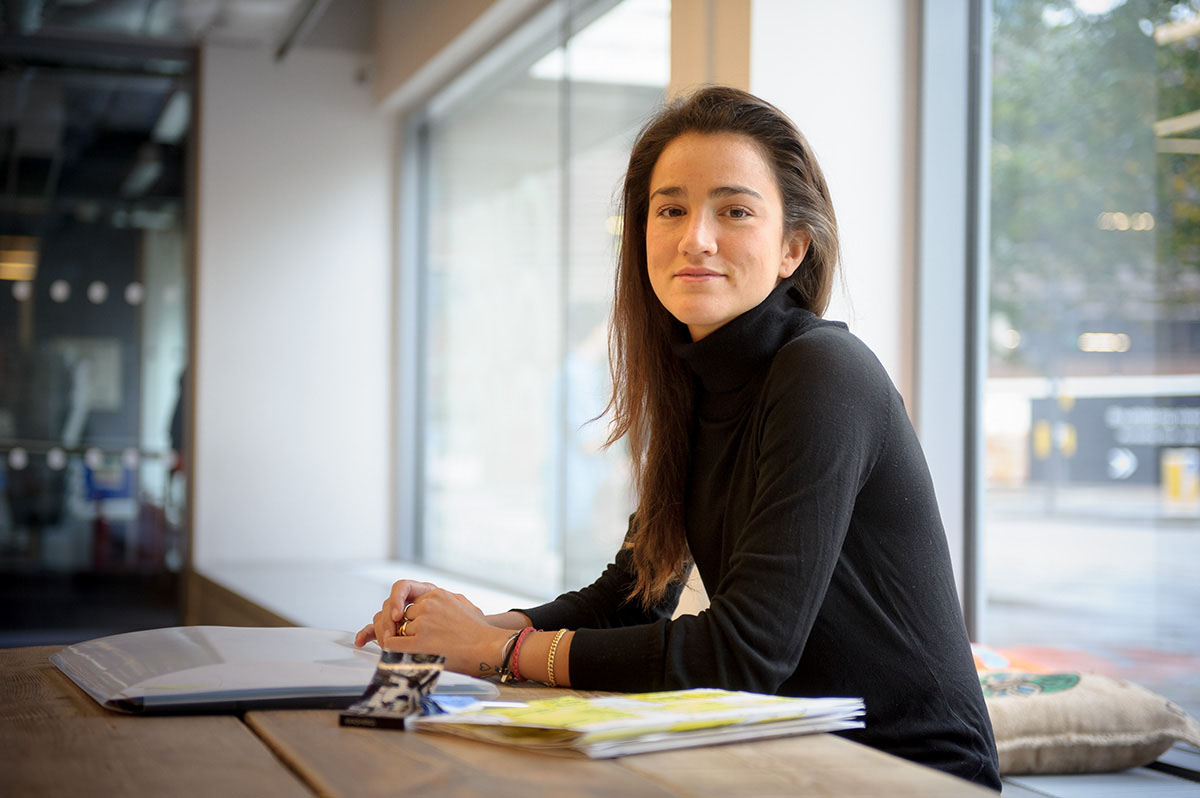 Julia King is in the throes of challenging what it means to be an architect. Her focus is on improving the lot of poor and disenfranchised communities. Rather than designing buildings, she has turned her attention to a much grittier issue: sanitation.

King was initially inspired by a tragedy in her mother’s country, Venezuela. “The year I had to decide what to study, there was a huge mudslide there with whole communities wiped out in three days. So I had this idea of how design could help real problems.”

The 31-year-old Venezuelan-British architect and urban researcher is based in both London and New Delhi. So far, she has constructed a sewer for 322 low-income houses in New Delhi, and is regenerating the Taj East drain, which runs through slums near the Taj Mahal. She is also working on a flat-pack pit latrine in rural India.

This scheme of flat-pack pit latrines promises a vital solution for underserved neighborhoods. Ten pilot toilets will be built this year, and more than 5,000 are planned for next year. King refers to it as “the Ikea of sanitation.”

In countries where many people still defecate in the open, well-designed sewerage systems can make a huge difference to hygiene and, hence, health.

She is due to complete her PhD by practice this September in the department of Architecture of Rapid Change and Scarce Resources (ARCSR) at London Metropolitan University, having received a full scholarship from the Water Trust Foundation.

Doing a PhD by practice means that her research is embedded in live projects, most of which she has initiated. “A lot of the work I’ve done has been about seeking out opportunities where there seemingly are none,” she says.

King sees the architect’s role as enabling those in authority (which in her case means government) to improve their decision-making processes. “Architects can visualize stuff and create alternative visions of what our cities can look like, so that people can make better decisions,” she says. “She believes that the temptation is for government to make big sweeping gestures with clear revenue streams; her own perspective is different: “People in my camp say, ‘Do small piecemeal things, but with less clear revenue streams.’”

Those in her camp include her chief collaborator: the Center for Urban and Regional Excellence (CURE), an Indian development NGO, which had an existing relationship with ARCSR. “I really like projects with direct links,” she says. “And CURE has incredible access on the ground.”

With CURE, she’s constructed a sewer in New Delhi that serves around 2,000 people. It’s a sanitation system for the community (rather than individual septic tanks, which are too costly) with rainwater collectors, individual basic toilet bowls, and shared black-water collection. 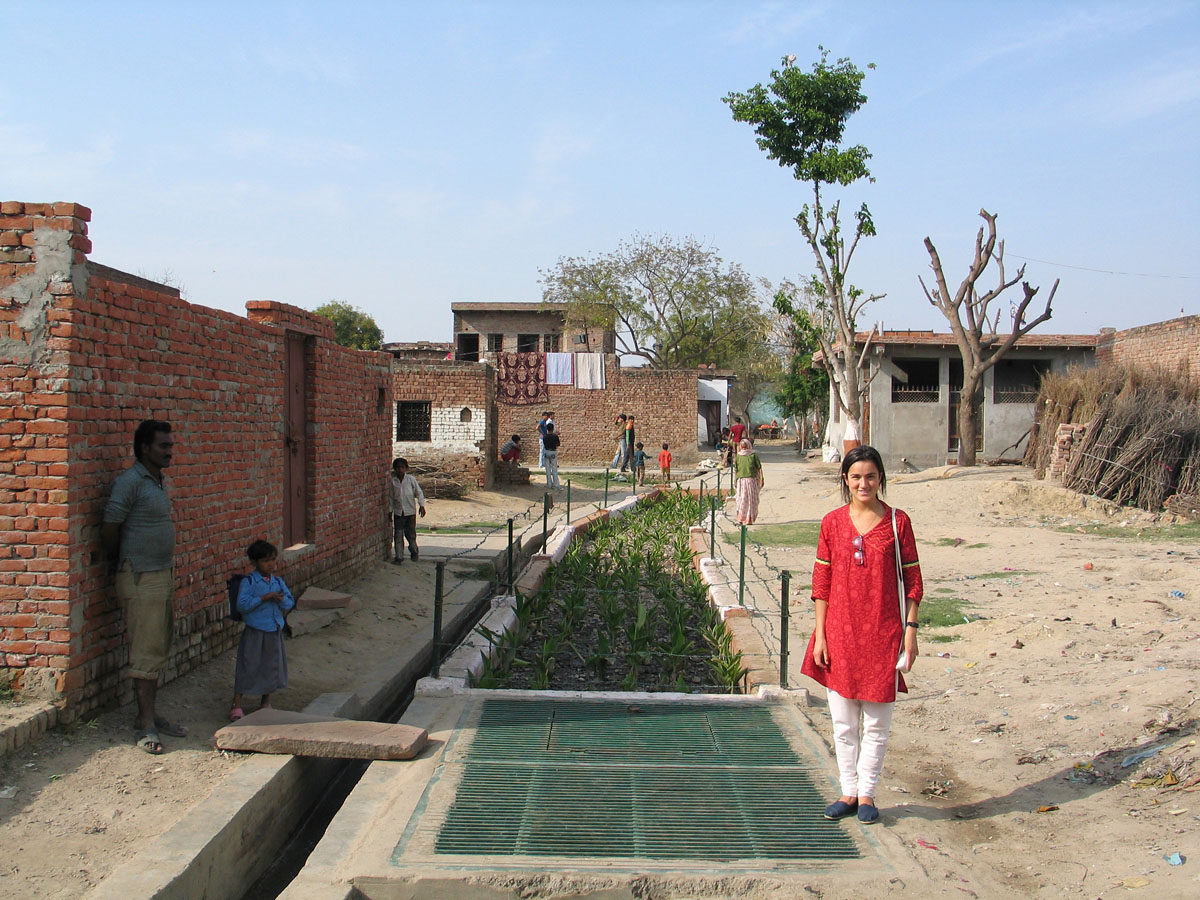 King visits CURE’s project in Agra, India. Her blog, Incremental Cities, was named one of the world’s best city blogs by the Guardian.

“We are now in talks with them (local government) about how we can scale up the initiative so that it can be applicable for 46,500 people.”

But not all King’s work is with nonprofits. Indian cement supplier Holcim has committed funds from its corporate social responsibility arm to support her flat-pack latrine scheme, a kit of parts and some mortar, which a family can assemble itself. The latrine’s simple structure depends upon the weight of the panels on the base, which stabilizes the posts.

Nor is all her work about sanitation. With some funds that she received after winning an award from Holcim in 2011, as well as with money from elsewhere and the help of CURE, King has set up a “revolving housing credit fund,” which enables a family to get a microloan to upgrade a home. She has so far worked with one family to improve its living conditions, and reduced the construction cost by 30 percent. “I am looking to expand this idea and raise more money for the revolving fund for more families, as it has been very successful.”

“Fundamentally, I think that contemporary architects must firstly and emphatically challenge what it means to be an architect. Conventional models have proven ineffective, as evidenced by the Great Recession and exploding urban problems worldwide. I think King shows a lot of bravery in letting her convictions drive her practice and being willing to engage models that a lot of architects would throw rocks at.” —Eric Cesal, executive director of Architecture for Humanity