For This Solar Design Pioneer, Architecture Is Synonymous With Energy

Daylight isn’t the first urban-planning consideration, but it is among the most important. This pioneer in solar design has worked for half a century to spread the message. 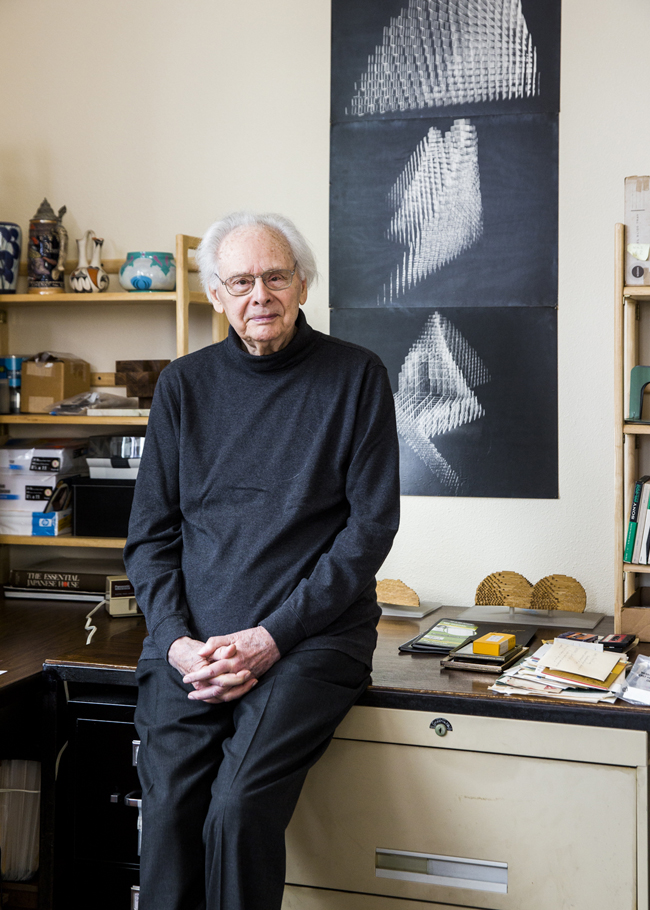 The architect and educator Ralph Knowles at home.

I meet architect and educator Ralph Knowles on an unseasonably warm autumn day, even for Southern California. He greets me in shirtsleeves (his shirt is a tropical pattern of vines and branches) and leads me to a seat on the balcony of his condo. The building—a retirement community—is fairly new, but mature oak trees line the quiet street. As we talk about his career, the California oaks form a poignant backdrop. For more than five decades, Knowles, 88, has argued for an architecture that hews closely to nature’s forces and rhythms.

Throughout the bruising 2016 election, climate change and the ecological impact of our insatiable demand for energy were the policy questions that were always on the sidelines and never explicitly addressed. Similarly, architects have often evaded these issues—embracing sustainability and LEED requirements as necessary, but rarely tackling them head-on. This uneasy relationship between energy  and architecture dates back decades. Knowles published his first book in 1974, just when the global economy was in the throes of an energy crisis. Petroleum and heating oil were in short supply, leading to not only the famous gas lines but also the political tensions between the United States and Middle Eastern nations that we still see today.

The text of Energy and Form: An Ecological Approach to Urban Growth was part energy conservation treatise and part call to action. Drawing on studies of pueblo architecture and analysis of California’s Owens Valley watershed, Knowles proposed a systematic method of shaping architecture and urban development in response to seasonal and climatic rhythms. In the book’s introduction, he writes that “its method is deduction and rests on the premise that human survival depends on our willingness to consciously direct urban growth.”

Read today, Energy and Form is a remarkably prescient predecessor to parametric analysis, which can approximate environmental impacts on building form in response to solar gain, shadow, or wind. Knowles, however, traces the inspiration for his solar envelope research back to when he was a student at North Carolina State University in the 1950s. (He was a pupil of the Argentine architect Eduardo Catalano.)

And in the preface, he credits Buckminster Fuller, who taught in the college of design, as the first issuer of a prophetic warning about the impact of urban expansion and industrialization on the earth’s resources. “At the time, we heard him only faintly,” writes Knowles. Like Fuller, Knowles was dedicated to research that would tackle the big energy issues, even if an audience wasn’t ready to hear his message. 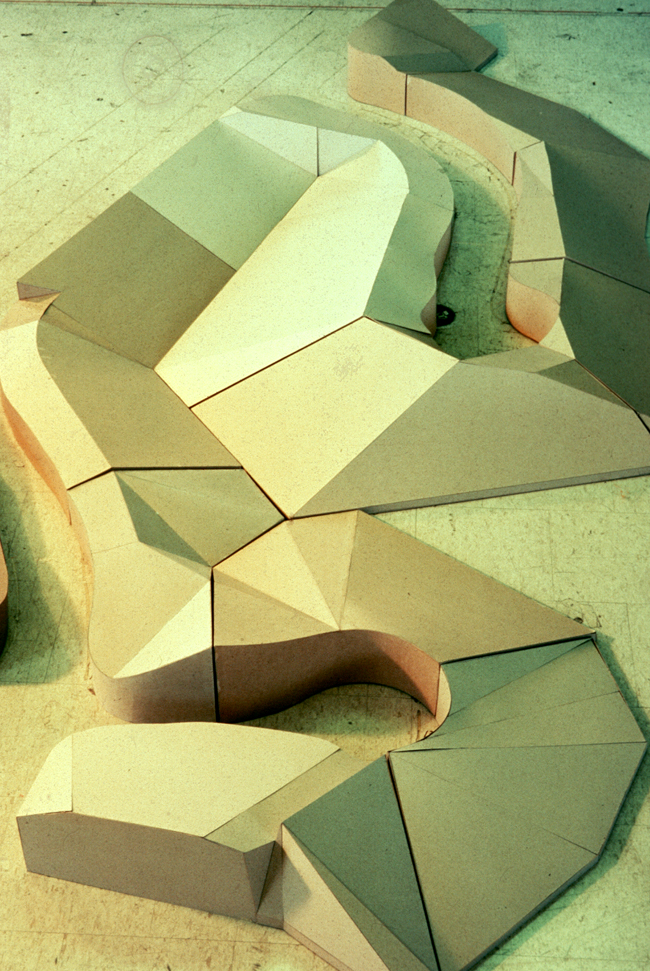 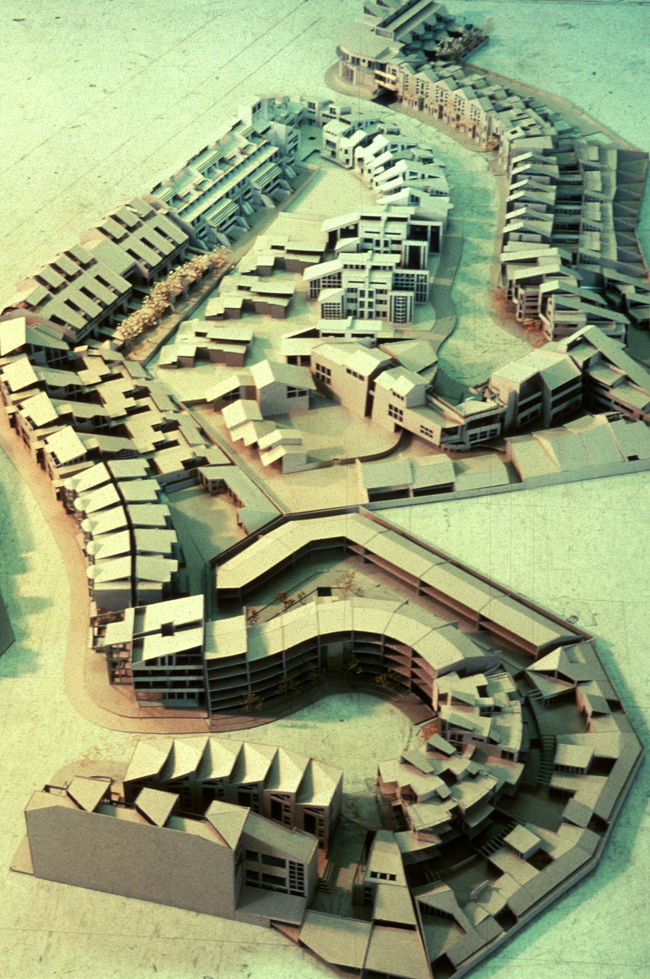 Knowles’s research into environmental conditions and theories about solar envelope zoning prefigured the parametric tools architects and planners use today. This scheme for an L.A. row-housing project demonstrates how dense developments—both low- and high-rise—could still provide equity in terms of natural sunlight.

Lately, people have been listening. This past September the Harvard Graduate School of Design (GSD) convened a two-day conference titled “Heliomorphism.” The esoteric-sounding term taken up by the GSD broadly describes the use of solar responsive design approaches in shaping cities and buildings. The inaugural event of the school’s Office for Urbanization, founded by architect and urbanist Charles Waldheim, used Knowles’s research into solar envelope zoning—a legal designation that if adopted as policy would guarantee solar access in urban areas—as a jumping-off point. “Architecture that conforms to solar envelope allows us to look at the whole city,” Knowles explains.

Waldheim sees equal access to light and air as part of the social contract of cities and a topic that deserves renewed attention. “What appeals to me about the topic is that it is both archaic and undercultivated in the last 25 years, which makes it ripe for appropriation,” Waldheim says. Knowles’s research, he adds, suggested (and still suggests) the possibility of understanding the making of individual energy-conscious buildings and sustainable city planning as a synthetic process. “Right now we have a condition that when talking about the city, we end up in one of two places—either we talk about policies and politics, or every project is a singularity,” Waldheim says. “[Heliomorphism] allows us to deal with questions of collective urban form in a directly ecological way.”

Over the years, Knowles’s research received funding from the National Endowment for the Arts and the Solar Energy Research Institute (launched in 1974 and now the National Renewable Energy Laboratory), but he found that moneys to support his efforts vanished under Ronald Reagan’s presidency. Mainstream interest in environmentalism ushered in during the ’60s and ’70s, a time of activism and policy change, faded in the ’80s as the energy crisis abated. Now the issue is back in play. The GSD conference was timed to coincide with the anniversary of New York City’s 1916 Zoning Resolution, which was the city’s first regulation of development in relationship to access to sunlight and air. A hundred years later, Waldheim’s Office for Urbanization hopes to augment Knowles’s research with public and private partnerships that propose zero-carbon approaches on a global scale capable of countering what it describes as “neoliberal corporate and governmental urbanizations.” 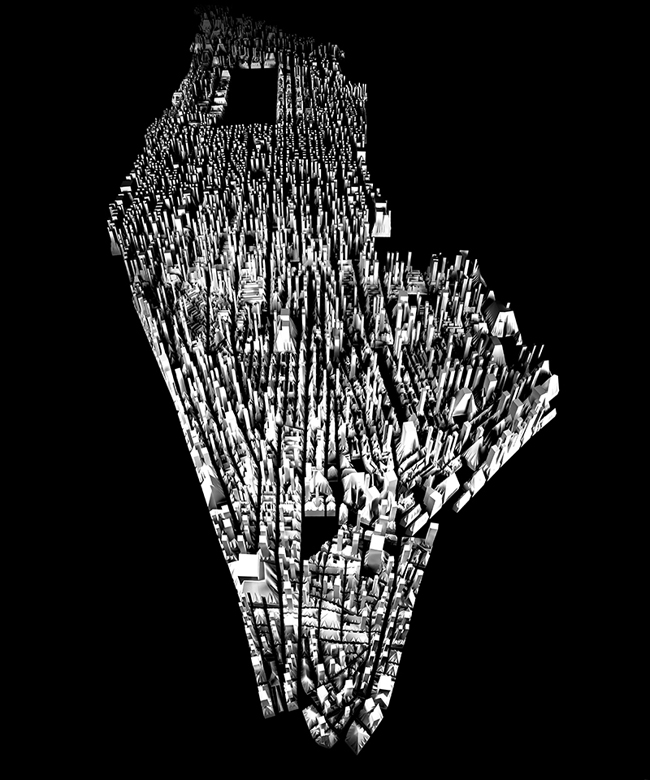 The Office for Urbanization at Harvard GSD produced a zoning exercise along the lines of Knowles’s research and applied it to Manhattan.

Although Knowles didn’t attend the conference, it featured keynote lectures by architects Thom Mayne and Jeanne Gang, who both credit him as an influence. In particular, Gang’s design for the Solar Carve Tower along Manhattan’s High Line used his solar envelope theories to shape the building. The architecture is “carved away” to maximize daylight within the office building and to maintain sunlight access and view corridors along the park. Gang first read about Knowles’s work in 2000 while prepping for a passive and low-energy architecture conference, and then visited him at the University of Southern California in Los Angeles the following year. “He generously received me and told me about the program, even though I was there simply to ask him questions and learn more about the solar envelope studies,” Gang recalls.

Now a professor emeritus at USC, Knowles taught in the school of architecture for more than 40 years and even served as interim dean from 1973 to 1975. Mayne was one of his students. “[Knowles] embedded in me an openness—an inquisitiveness for exploring the limitless potential of architecture, giving me the confidence in our discipline’s capacity to form and give life to the complex, interrelated, highly differentiated, and enduring phenomena that form it,” says the Pritzker laureate.

At USC, Knowles pioneered a new kind of design studio within the school of architecture. His studios were designed as testing laboratories and, in a pre-CAD era, focused on hands-on research. He and the students built equipment to simulate the movement of the sun across a structure and designed experiments to model wind and water-flow dynamics. Energy and Form is full of photographs of student projects made out of wood sticks and blocks that were generated through testing. Knowles’s methodology won him the 1974 AIA Medal for Research and lives on with USC’s master of building science graduate program.

Like Bucky Fuller, Knowles was dedicated to research that would tackle the big energy issues, even if an audience wasn’t ready to hear his message.

Applied on an urban scale, the work makes a case for access and equity that can directly affect policy. He flips through a copy of a later book, Sun Rhythm Form (1981), and points to a diagram that shows the arrangement of multifamily units on a site. “We were pushing for the highest density and a range of housing types,” he recalls, and acknowledges the continued need for a diversity of housing types. “Form has its own social implications.” The point is especially relevant in tight housing markets like Los Angeles or San Francisco, where an increase in developer-driven urban infill may threaten access to sunlight and rising apartment towers cast long shadows.

It is this social impact of his research that resonates the most with contemporary practitioners. “It struck me that while so many at the time were preoccupied with the technology of harvesting solar power, here was someone who was considering the societal impact and how sunlight could be considered a key driver for urban form and zoning,” Gang says.

Knowles seems genuinely surprised and touched by the new interest in his work. As we thumb through his books together around the balcony table, I can see clippings of articles—some yellowed, some fresh—tucked into the pages. “It indicates that they have faith in solar energy,” he says of Waldheim and others who are reviving interest in his work, but also cautions, “We still have a long way to go.” His lengthy career working on designing with nature has taught him perspective. As we wrap up our conversation, he quotes his wife, Mer: “The seeds that you plant in the ground take a long time to grow.” 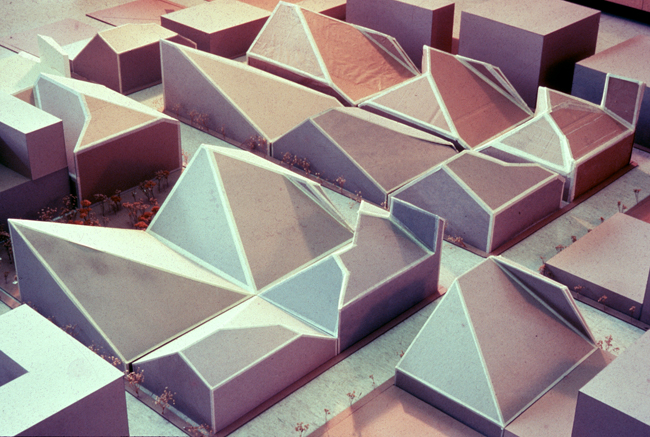 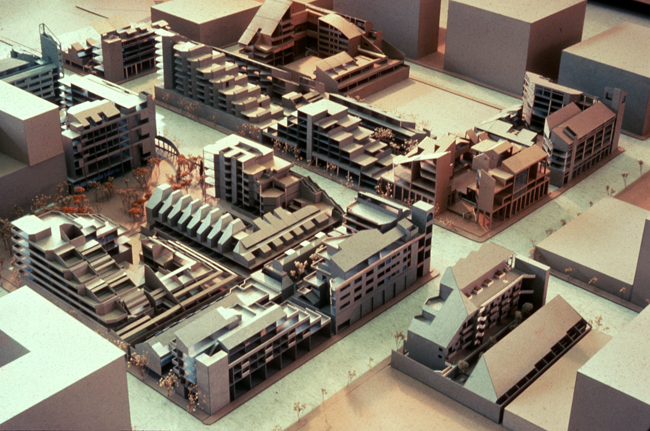 A study for a mixed-use development illustrates how the solar envelope (above) determines both the form of the development and its articulation (below). The configuration ensures that every unit has at least four hours of direct sun exposure, as well as cross ventilation.