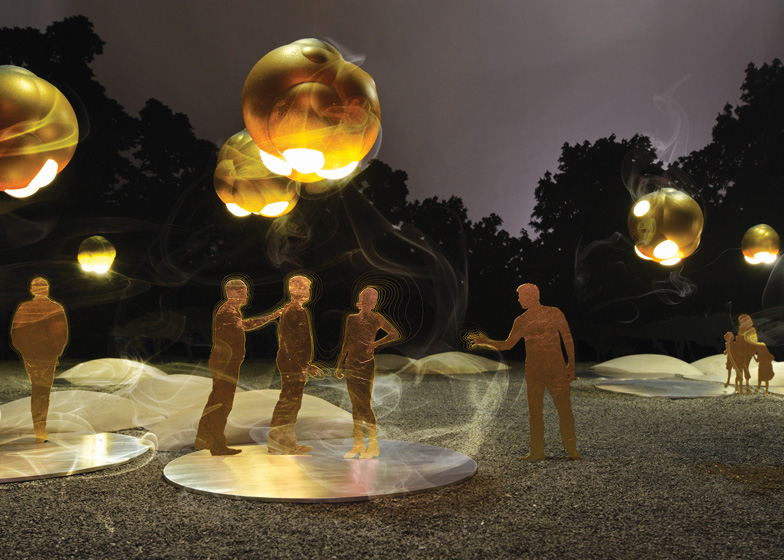 EOS
Lally’s project for the ongoing Istanbul Design Biennial—globes of light and heat that define spaces with distinct sensory experiences—shows how energy can be an architectural element. The hovering spherical “suns” release the energy systems—thermal, acoustic, electromagnetic, and light. Each of these “suns” can move on and off the site, providing increased flexibility for activity type and duration, allowing them to become dormant when not needed.

The 40-year-old Chicago-based architect Sean Lally has no hesitation in stating what he thinks his peers should be primarily concerned with. “One of the biggest issues in architecture—and beyond—is energy,” he says. Lally doesn’t just mean electricity, or fossil fuels, or solar gain, the kind of metrics that the sustainability advocates work with. He is speaking in grand Einsteinian terms of the energy inherent in every material, in every space, and in the constant exchange of energy between our bodies and their surroundings—in short, the whole designed environment viewed as an energy system.

It’s not particularly easy at first to envision what this has to do with architecture. But Lally, whose book on the subject, The Air from Other Planets: A Brief History of Architecture to Come, released by Lars Müller Publishers this year, has developed a shorthand to explain his ideas. “I always go back to the idea of street lighting as an example,” he says, referring to the cone of light cast from a lamp. It is pure energy, “But it has boundaries, it has edges, interiors, and it has programmatic, aesthetic qualities.” Energy has form, and it is conditions of energy— light, heat, air movement—that architects have tried to shape with walls, ceilings, and windows. So as we seek an architectural approach that will be suitable for an age of climate change, why not design energy itself?

“It’s a different way of envisioning how you conceive and generate form and spatial capacity,” says Anne Rieselbach, the program director of the Architectural League of New York. Lally won the League Prize in 2012. “That year, the theme was ‘No Precedent.’ I think that’s really an important way to consider his work,” she says. 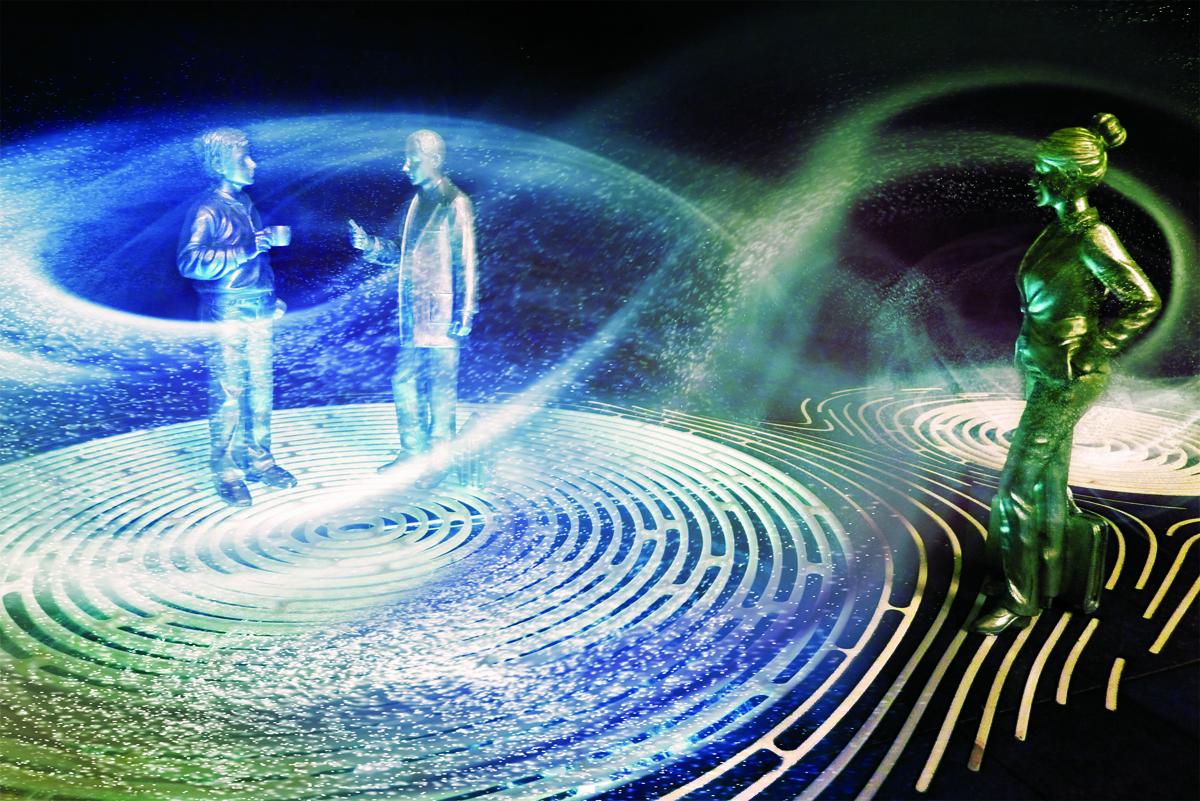 Proof 001
Lally’s recent proposal for a public plaza, uses below-ground sources to push air through the sidewalk. The differences in temperature and velocity will create a surface that can be both seen and felt by passersby.

Last year, Lally proposed an installation for a public space outside the Trump Tower in Chicago. Air would be pushed out and pulled back in through a series of openings in the sidewalk, generating currents of warmth and an acoustic separation. It would be, in fact, a room with walls of moving air. The most interesting idea, however, was that “it didn’t have to be on and present continually,” Lally says. “Of course the installation was timed to occur in early fall into early winter, so you could see how the shape of it would actually change from evening to daytime. The external pressures of the climate would affect the shape, temperature, and aesthetics of it.” 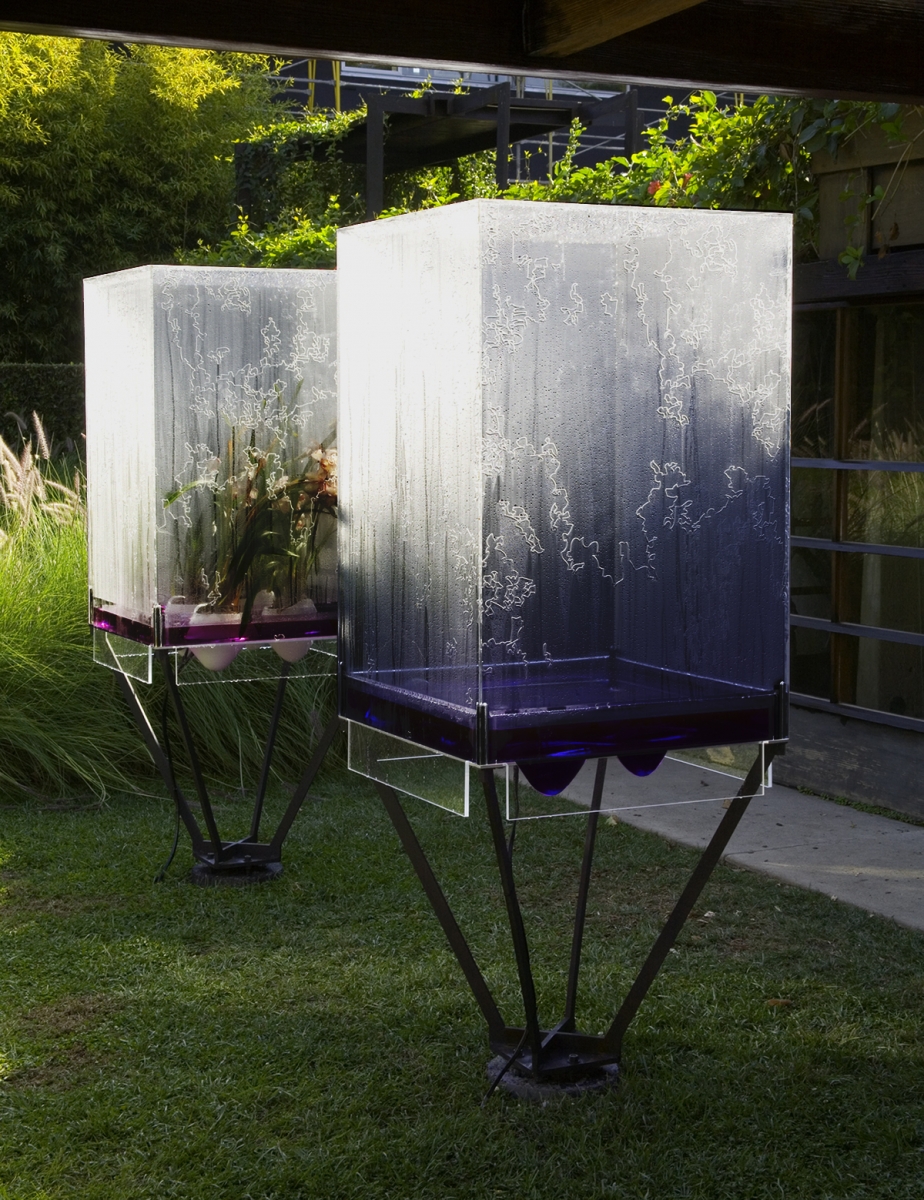 Amplification
One of Lally’s early projects, it consisted of six boxes, each with a unique micro-climate on the inside. Simulations in Cosmos, a software that models fluid dynamics, helps visualize the material energies in the box, including heat transfer and air velocity.

Much as landscape architects speak of succession landscapes, where plant species grow and wane with the cycles of climate, Lally talks about succession architecture in his book: A building defined by energy would have to change shape to accommodate shifts in the surroundings, much as a flame flickers when the wind blows. It is an idea he is exploring at the ongoing Istanbul Design Biennial. With the aid of a 20-square-foot stage model he built in his studio, he will show how an environment defined by orbs of light and heat will change through the seasons, affecting how humans behave in it.

Lally is currently undertaking research that will help realize at least some of his ideas as prototypes. But he is already thinking even further into the future, where advances in biotechnology and medicine will mean that our sensory perceptions will grow ever keener. “These two things are changing— both the materials we have available to us and how the human body perceives them,” he says. “A physical boundary, and how to perceive the boundary, that’s architecture. That’s what architecture is going to be like in twenty years.”