My co-worker must have been reading my mind after I mentioned that I would be attending a Friday-night panel titled, “The Politics of Craft and Design,” part of the American Craft Show at Fort Mason in San Francisco. “What politics?” she asked, speaking aloud the very thought that had piqued my interest in the topic. […]

My co-worker must have been reading my mind after I mentioned that I would be attending a Friday-night panel titled, “The Politics of Craft and Design,” part of the American Craft Show at Fort Mason in San Francisco.

“What politics?” she asked, speaking aloud the very thought that had piqued my interest in the topic.

The panel, moderated by American Craft editor Andrew Wagner, boasted an impressive list of names: Tina Barseghian, editor-in-chief of Craft; Bay Area furniture maker Garry Knox Bennett; Rob Forbes, director of Studio Forbes and founder of Design Within Reach; Edie Kahula Pereira, a designer with Artecnica in Los Angeles; Robin Petravic, co-owner of Sausalito-based Heath Ceramics; and San Francisco artist Stephanie Syjuco. Still, while all the panelists illustrated ways that their work challenges standard modes of design and production, only Syjuco’s struck me as clearly “political.” Through her Counterfeit Crochet project, which she explicitly dubs “critique of a political economy,” Syjuco recruited needleworkers from around the world to fashion lumpy yarn versions of coveted designer handbags and other accessories, and led counterfeiting workshops in Beijing, Istanbul and Manila. Her Anti-Factory project is both living art installation and small business – she sews clothes from recycled and salvaged fabrics and handles every aspect of the endeavor, from sourcing to shipping. “It’s literally like a one-woman business that will never expand. It’s a horrible business model,” she explained. “I’m trying to figure out if it’s still possible to be that responsible for everything.” 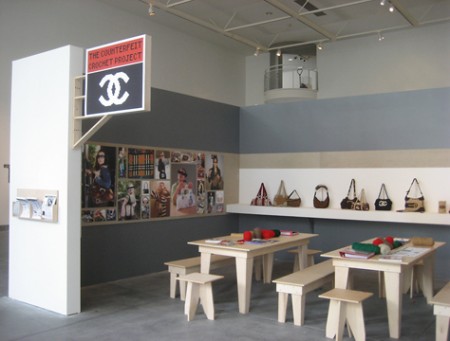 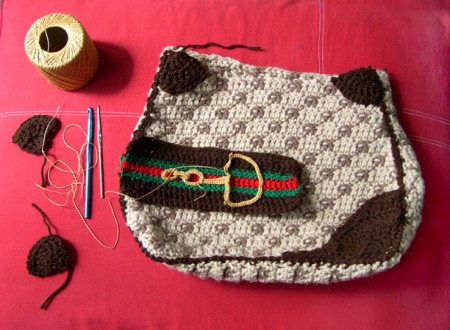 Forbes did not discuss the implications of his own projects, other than to mention providing a market for small-scale designers through DWR. He did, however, suggest the craft community could better challenge the status quo by following the lead of the Slow Food movement. “I think it’s getting people to talk about the nature of consumption,” he said. “It would be interesting for the craft movement in the U.S. to look at that and say, ‘What do we need to do to have that kind of international influence?'” At this point, Wagner might have asked Forbes to examine his own contributions to the design elite in the U.S. and the types of consumption that encourages. Alas, the moderator opted to keep the tone decidedly uncontroversial.

Other panelists struggled a bit more to relate their work to the evening’s topic. Petravic spoke of operating locally and maintaining designer control over products, Pereira enumerated the benefits and challenges of working with indigenous artisans, Barseghian spoke of the sense of community within the DIY movement, a concept that surfaced numerous times. Yet none of these panelists articulated exactly what makes these approaches political, nor was I convinced they necessarily believed they were.

Philip Wood, co-founder of San Francisco-based design studio Citizen Citizen may have helped illuminate the reasons for this disconnect when the floor was opened up for comments. “There seems to be a tremendous amount of doubt about where craft is in our culture,” Wood noted. “If craft is defined against the industrial revolution, what is it going to be in the technological age?” Wood’s question was not fully addressed, unfortunately, though an exchange between a craft show exhibitor and Syjuco may point in a less-than-optimistic direction: “You say you have a horrible business model. And it’s my business model!” the exhibitor observed, pointing out that she has been working for 30 years much as Syjuco has for one. “And now I’m struggling to pay health insurance. But what I wanted to know is, is it sustaining you?”

“This is not sustainable,” Syjuco responded, noting that she had recently picked up a teaching gig to supplement her income. “This grand experiment of trying to live off Anti-Factory for the last year isn’t working out.” And that seemed to underscore the panel’s overarching, if under-examined, theme: In our hyper-consumed and mass-produced society, simply working outside the mainstream – and making profound personal investments in that work – is in and of itself political. I wonder, though, if the more political act might be to just call that living.